After a most frustrating morning trying to get a map onto my Garmin Edge 705 to use as a hand-held GPS where all I actually ended up doing was getting angry and uploading 300 junk activities to Garmin connect (and still couldn't copy the map...) - I went, armed with Mrs' bike computer, to the tram.

The 30 mile Croydon Ultra route starts at Lloyd Park stop on the Croydon Tramlink which conveniently also has a stop 200m from my front door. Getting to and from the race on July 5th will not be a problem. 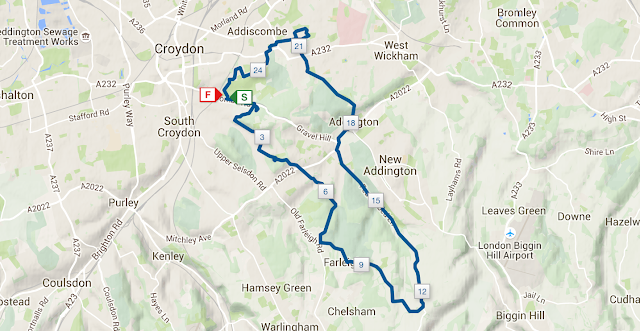 The route is hillier than I'm used to, though small fry compared to most. Two laps of fifteen miles. I started well, save for a couple of navigational errors, running for nine minutes, walking for one, and hiking the hills.

The trail sections were really good fun, I'm starting to really get a lot of enjoyment from running off-road. But after five or six miles it became more on road and footpath. My feet got tired and I found it hard to start running after my minute walk.

Graph of altitude and pace - the walking bit at the end is fairly plain to see!

Stopped for an emergency bottle of water and Pepperami from a petrol station, and pushed on. In the end I walked most of the last couple of miles.

It was good to have an image of what I'll be up against in a fortnight - I'm not sure how I'm going to get round twice though!

Three weeks down, one more to go...