In mid-October last year Mrs and I decided to have another go at a road marathon. Louise was talking about a spring run, and there were around 18 weeks until the Seville Marathon so that looked like a good idea. I decided to try, for the third time, working through the Pfitzinger & Douglas plan, 18 weeks of training for those with a modest running base.

Training went fairly well, it's good to have something to focus on during the cold winter months (not that they really got that cold this time) - though there was a lot of running through parks without lights in the dark. 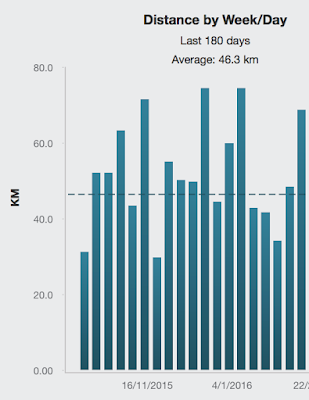 I saw the plan right to the end, though I missed a few sessions along the way - the main thing is consistency and I was at least running regularly. Unfortunately, the easiest sessions to miss, the longer runs on Sunday (why do they make bed so warm and hard to get out of when is cold and dark outside?) and mid-week, are also the most important ones. 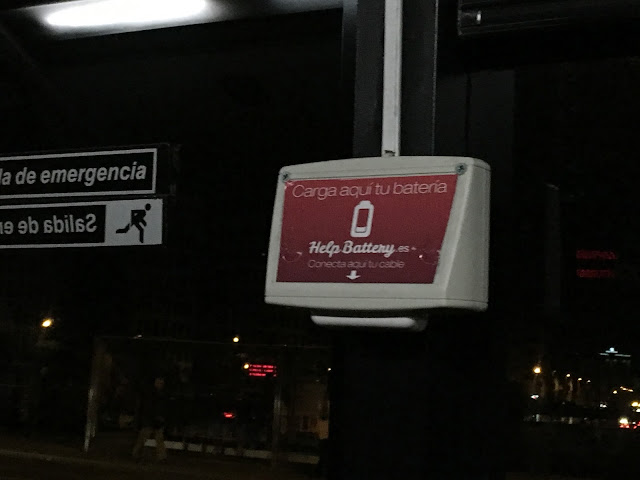 In Seville you can charge your phone on the bus

February rolled round surprisingly quickly, and before I knew it Mrs and I were heading off to the airport to meet up with Louise and head out to Spain.

We arrived on Friday evening and had Saturday to relax a bit and register. 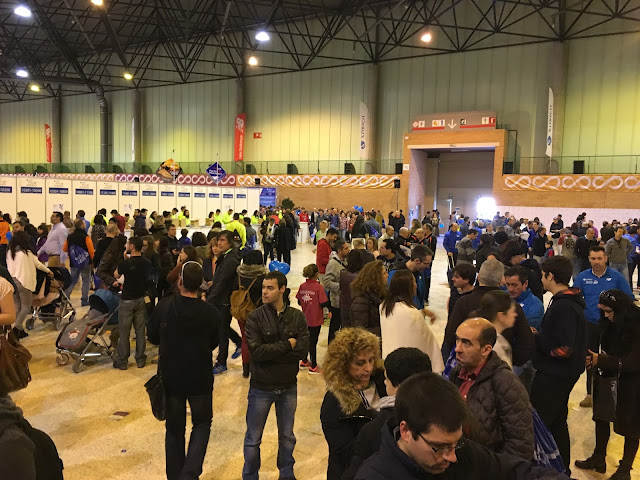 The registration hall was busy, this was the quite end - the expo end was heaving 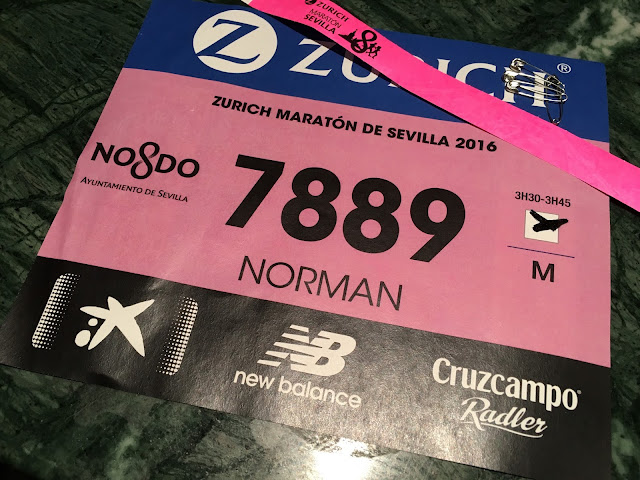 Race day arrived and after a good strong coffee to get started we made our way to the start, at the somewhat dilapidated Olympic Stadium. We chose a hotel close to the start/finish to keep the logistics easy. 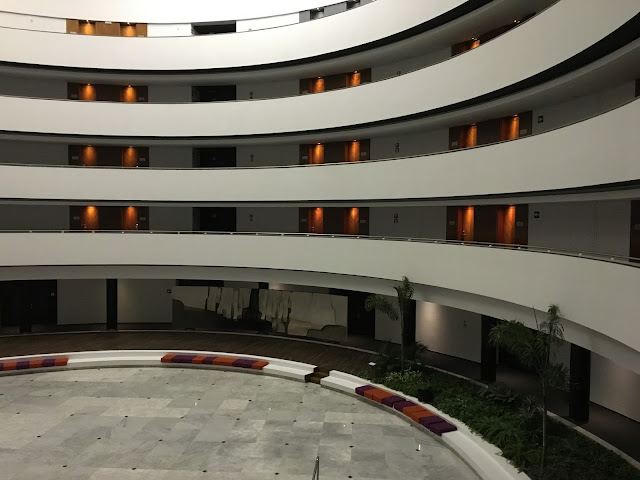 I loved the design of the Hotel Barcelo

I was planning to run to finish rather than chase a time - a PB would be nice but I knew missing those long runs would cost me. I set off at a good pace and held it well, going through half way in 1:52. Like my previous attempt at a "fast" marathon, I fell apart in the last quarter. 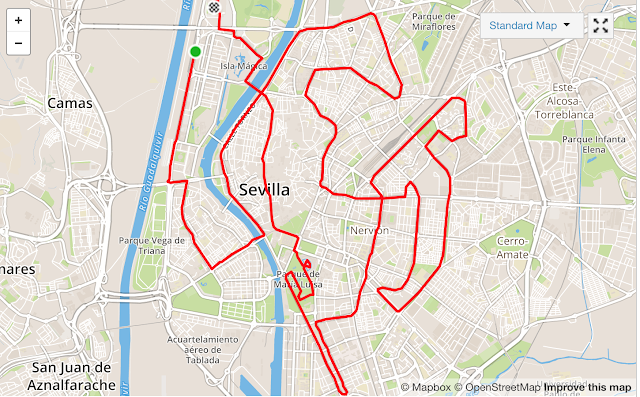 Very windy route, but plenty to look at

This time I managed it better, and adopted a run/walk strategy - walking the first 100-200m of each km and then running the remainder. The increasing temperatures were not helping, it was a delightful 14C or so at the start, and had climbed to almost 25C by the time we finished! 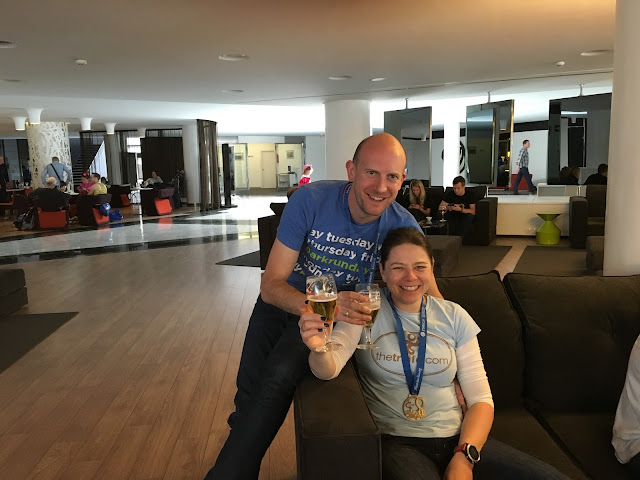 Medals (and beer) all round

My final time was 4:02:22 - I'll take that. Mrs had a great run coming in only just behind me in 4:04:35 to knock more than twenty minutes off her previous best time - an excellent performance! If we'd have been running 45km rather than 42.2km I'm certain she'd have overtaken me. Her race report is here.

We walked slowly back to the hotel after a bit of a stressful post-finish area walking through the bowels of the stadium in an incredibly oppressive and echoey space that I found very disorienting and uncomfortable, and had a relaxing afternoon with our feet up and a well earned glass of wine.

We weren't flying back until Monday evening, so the three of us spent Monday strolling around the town centre and enjoying a nice beer. 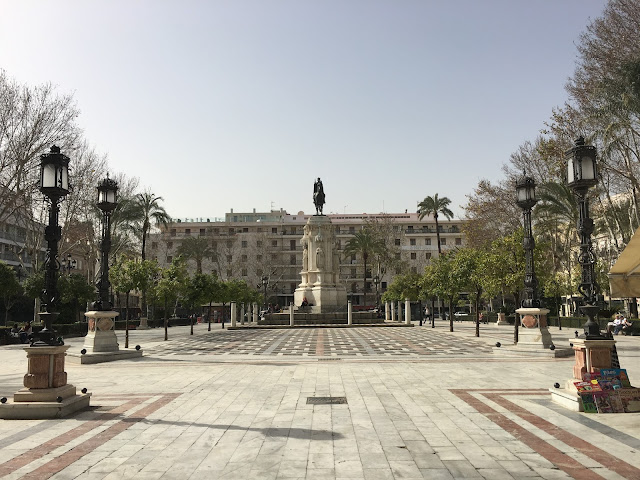 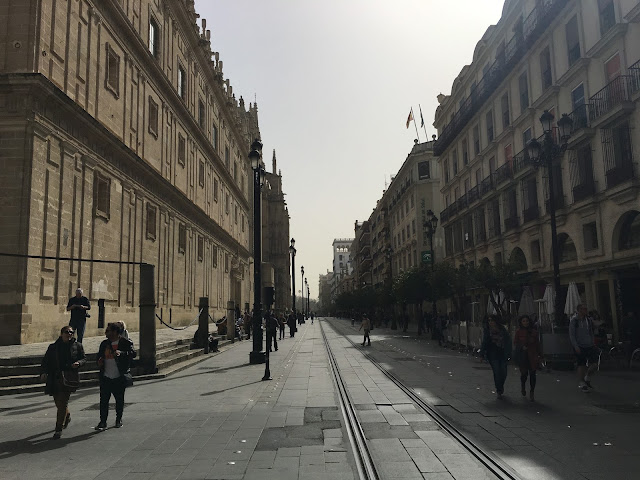 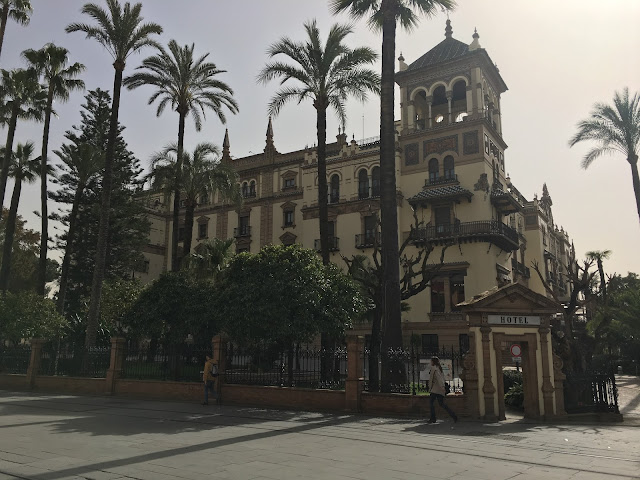 
I enjoyed the run, and the course was good and interesting. Going from training at 0C for months to running in 20C+ was hard, but it was nice to get a little bit of sun over the weekend.

Details on Strava and Garmin Connect.
Posted by Norm at 12:57