Most years Mrs and I rent a cottage somewhere for a week or two to "get away from it all". It's a perfect opportunity to explore some interesting parkruns that we wouldn't normally get near to, and more recently we've been looking at local races to enter too.

We had a fantastic time at the Malmesbury Half Marathon a couple of years ago. Last year was straight after Mrs had run the entire 184 miles of the Thames Path so I was a solo coastal trail runner down in Newquay. This year we've come up to the Lake District National Park and are staying in Coniston. Picking the parkrun was easy (there are only two in the region of the Lake District - Fell Foot and Keswick), and we took to the running sites for some interesting local races.

We had a nice run (despite the monumental downpour) at Fell Foot parkrun on Saturday, a good warmup for the week's first local race - Derwent AC's annual Cumberland Ale 10 on the Sunday. 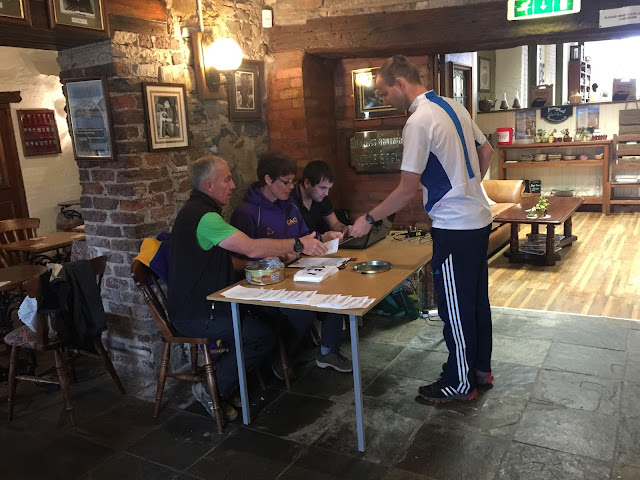 Registration was in the Jenning's Brewery souvenir shop and bar

We arrived a bit early at the start, Jenning's Brewery in Cockermouth, right up on the North Western edge of the Lake District. In fact, I think we were the first people there. They hadn't even set up the registration table yet. We hung around a bit until we could sign in, then went to wander round to find a coffee. Options were limited at 10am on a Sunday morning in Cockermouth, but we found sanctuary in Merienda, a relaxed little independent coffee shop (I know the site says Keswick, but they're in Cockermouth too).

Charged with some serious caffeine, we walked back to Jenning's Brewery for the start. Entries are capped at 100 but there can't have been any more than 70 on the start line. It was a very friendly relaxed atmosphere, and I was looking forward to the "undulating" course (I've learned that "undulating" is one of those running euphemisms).

Mrs and I decided to run our own races rather than stay together, I positioned myself mid-pack and she headed a bit further back. 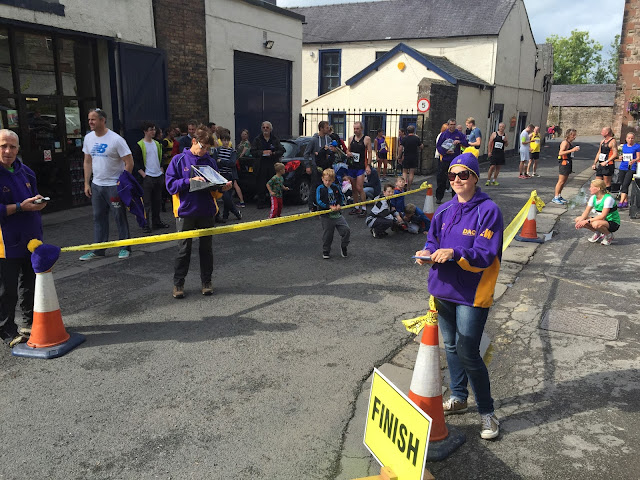 The finish line was parkrun inspired

With very little fanfare and no countdown, there was a "Go!" called, and we were off! It's a 10-mile lollypop-styled course with a 3 and a bit mile out-and-back with a loop at the end. The undulations got started early as the first mile was all uphill! I took the hill gently, and got into my stride in the second and third miles. I felt great, running was easy and my form was good (or felt good at least, no idea what I actually look like!) and I started pulling in the excitable runners who had started too fast.

With such a small field we quickly separated out and found our paces. All the way round I gradually reeled people in, very slowly making one or two places per mile. I loved it. I ran the gentle hills as if they were flat, and ran the steep hills conservatively (but without walking). Downs were the best. Mrs told me a long time ago that people generally run the ups too hard and the downs too easy. Ever since then I've made an effort to run down hills quickly - and it makes a big difference, a really big difference (try it). 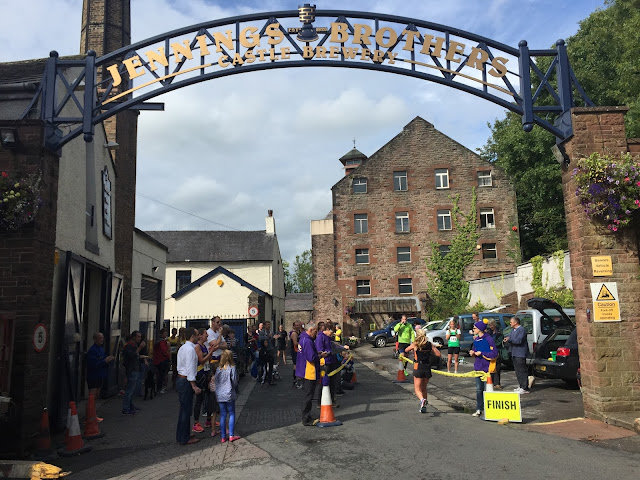 While I was running I split the race into three - first three miles (should feel easily in control), middle three (turn up the effort), final 3 (push to the end). I was discounting the last mile as I now knew it to be all downhill. I didn't have a target time, when Mrs and I were discussing it I thought an hour and a half might be good - she thought that was too fast for a hilly 10.

There was a lovely fast and steep descent just before the loop, I commented to someone "What goes down..." and tried not to think about running up it in a few miles time.

As it was, I was on a long climb on the loop when I passed the 5 mile sign. I looked at my watch for the first time and it showed 40:08. I was very happy with that! I began to think that with the last mile being downhill then a one-hour and twenty minutes time might be possible. I decided to go for it.

At mile 5 and a half there was a lovely downhill that went on forever, I opened up and overtook someone who had been sat a few 10s of metres in front of me all the way up the previous climb. Reaching the end of the loop, I prepared myself for going up the hill I'd enjoyed earlier. It was very steep - the closest I came to walking - but with 1:20:00 in mind I pushed on.

Reeling people in now was harder as we were all at roughly the same speed. All through the return leg I was driven on by someone I'd had in my view for some miles. He was faster on the ups, and I was faster on the downs, but he was slowly pulling away. I redoubled my efforts, making sure to run the ups and keep pushing off the top (a technique I've carried over from cycling).

The kilometres had been beeping along on my watch but, apart from the half way point, I hadn't looked at any times. I was now coming up on the 8-mile marker and thought I'd take a peek and see if 1:20:00 was still a possibility. As I ran past the marker my time ticked over to 1:04:00 - I needed two 8-minute miles back-to-back. I always run in kilometres so I didn't know what effort I needed for 8-minute miles, I thought I'd just push hard as I could and see where I was at the 9-mile marker. Mile 8 was a long drag up an incline with a steep bit at the top, the 9-mile marker was just over the summit. Push harder...

It felt a lot lumpier than this!

Pace was good throughout with a noticeable acceleration at the end

Huffing and puffing from the climb I checked my watch at the marker - it read 1:12:08, I was a little over the 8 minutes, but I knew most of the last mile was down. I didn't want to relax though, I knew it would be tight.

I pushed all the way down back into Cockermouth town, and ran hard down the steep narrow road into the brewery. The finish funnel looked just like a parkrun funnel, and pushing right to the end I ran right through the line (no slacking off!). The previous finishers were all milling around and clapping and cheering each new runner - there were a good few dozen in front of me. I was handed my complementary bottle of beer, and staggered off to get my breath back. 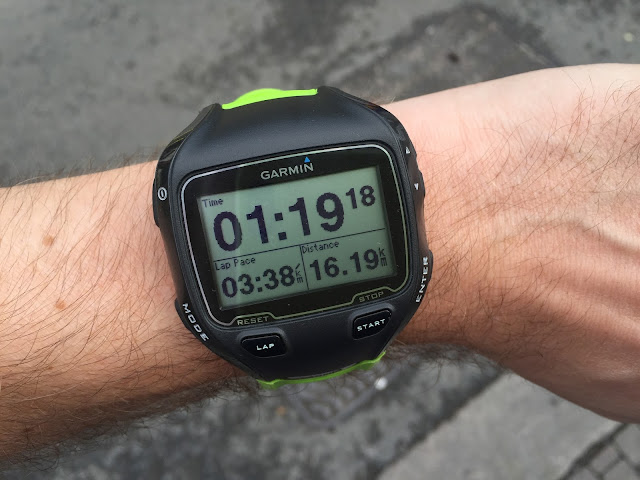 Watch time made me happy

I wobbled about near the finish funnel and clapped the arrivals waiting for Mrs. She arrived in no time, chalking up 1:31:40 on the clock - also a fantastic time ahead of expectations. We were overjoyed! So overjoyed we helped demolish the buffet. 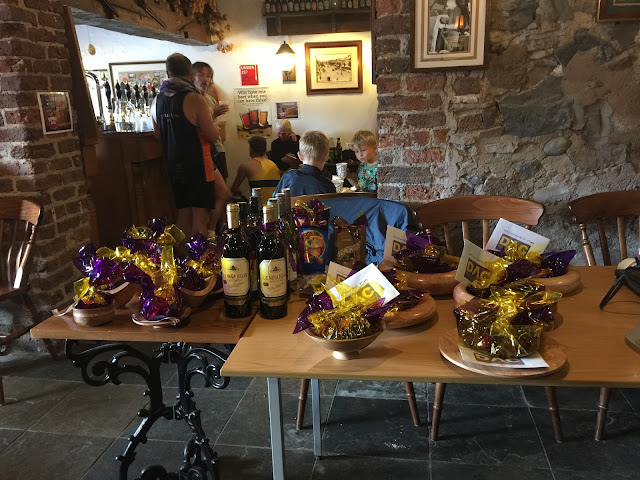 Prizes waiting for winners - the overall winners and all age group winners won a prize, impressive 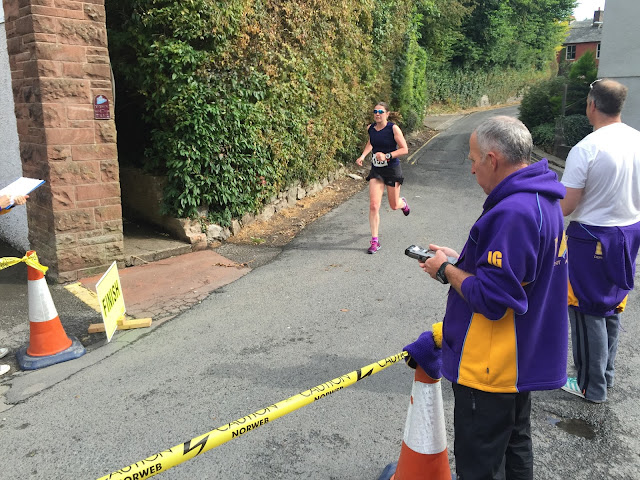 Mrs arrived at quite a pace!

The official results agree with my watch time within a second, putting me at 1:19:17. I was in 36th position and 6th in my age group. Mrs was in 55th place and 7th in her age group. The winning time was an incredible 58:40! 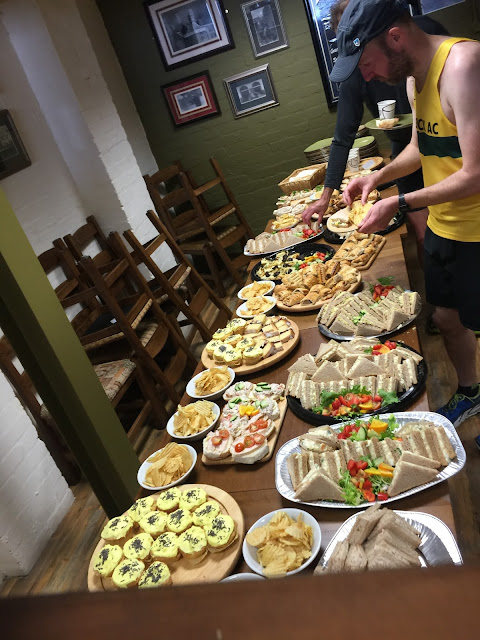 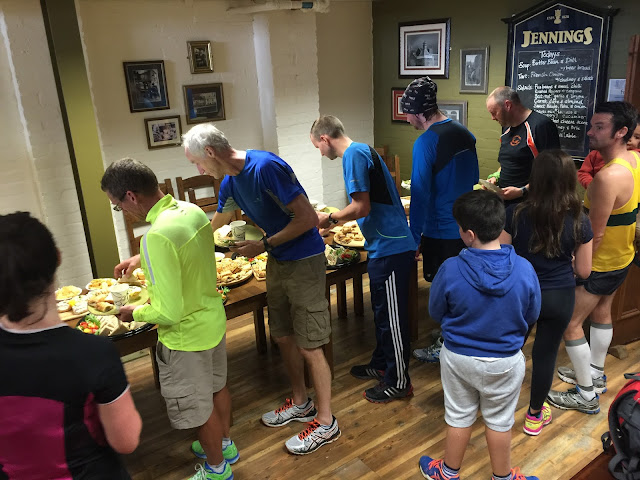 This was an excellent local race. It's staged annually so I'd heartily recommend it if you're in the area next year. Thank you Derwent AC, thank you volunteers, and thank you Scouts who manned the water station (I didn't take any water, but it doesn't mean I don't appreciate your efforts :)

Let's see what we can find for next weekend. 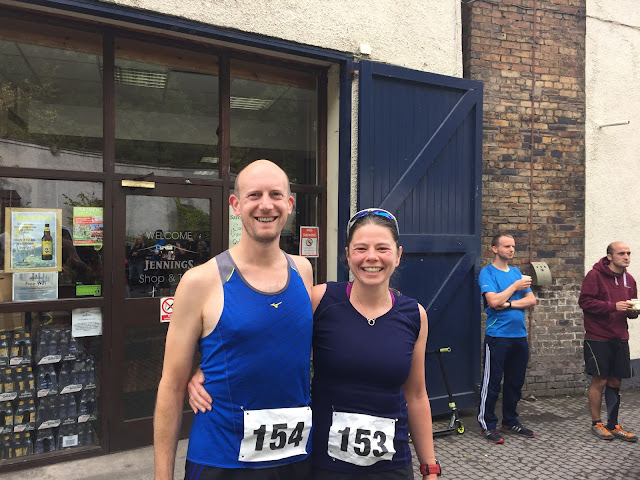 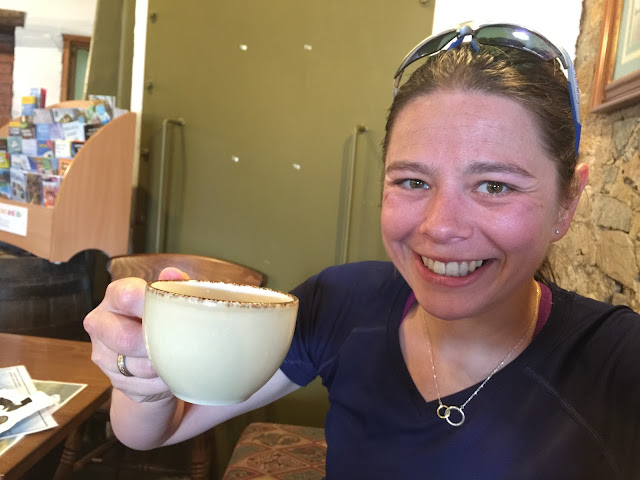 The ultimate recovery drink - a good robust cuppa
Posted by Norm at 19:22