I've noticed a race around Wimbledon Common a few times, and today I was in it. It's the Wimbledon Half Marathon, put on by Run Through events. And it was wet. Very wet. The rain started soon after we arrived, and gradually got harder.

I was aiming to beat my Hitchin Hard Half time of 2:00:07 so I placed myself in the sub-2 wave. Mrs was also aiming to beat her time and go sub 2:15, so she went in the fourth wave. 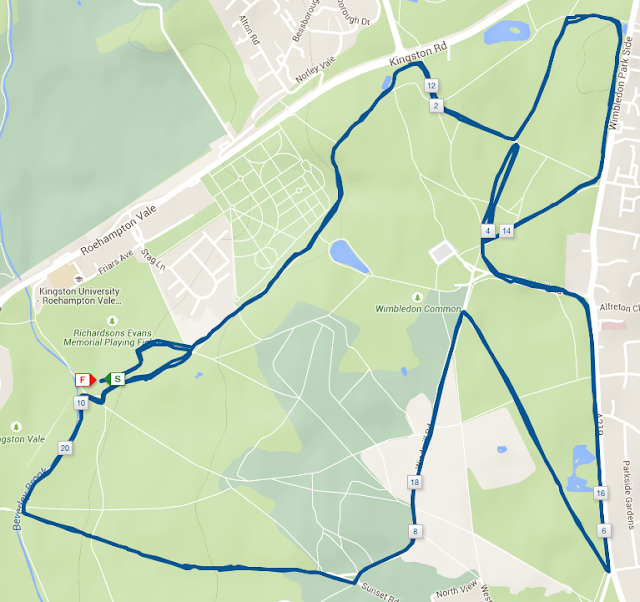 The Wimbledon Half route

The first couple of km are mainly uphill, climbing from the recreation ground up towards the Wimbledon parkrun route and the Windmill tea rooms. I took a nice easy start, 6:00 for the first km, 5:50 for the second. Once up on the flat middle section though I felt good, so pushed a little harder. I was aiming for an average of under 5:40 per km, so was quite pleased when I knocked the next few off at around 5:20.

What goes up must come down, so it was a nice long fast downhill back to the river to complete lap 1. I felt really good, and was running at a good even pace. I'd been steadily overtaking people all the way round, and was enjoying picking off who would be next.

The uphill section was a bit tougher this time, but I engaged my glutes and kept upright, with high cadence - that seemed to work well. The rain was absolutely torrential, despite being in a forest for most of the route we were all completely drenched to the skin!

Into the final third of the race distance and I was having to work harder to keep the pace up. I was confident I would break 2:00 and it looked like I'd even get under 1:55. Finishing the lap there's a little nasty hill that nearly killed me, but then back onto the grass of the playing field for a finishing stretch and a bit of a sprint to the line. 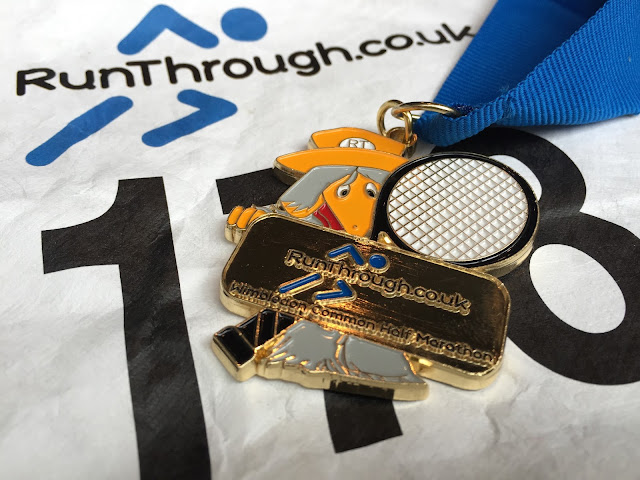 The best thing? The medal has a Womble on it :)

The official results are out already, and with them the proof that I'd smashed my target of 2:00, coming in at 1:52:27 for 180th position overall. Mrs also did absolutely amazingly, finishing in 2:06:44 for 300th place overall. We're both super-happy with that, on a muddy, soaking wet, 100% off-road course (with some hills for fun).

The only other thing I wanted to do was negative split (do the second half faster than the first). Despite logging my runs into about a half dozen different activity/performance tracking sites, I can't see an easy way to find that out (you'd think "What was the time when I got to 10.55km?" would be easy enough to work out!). 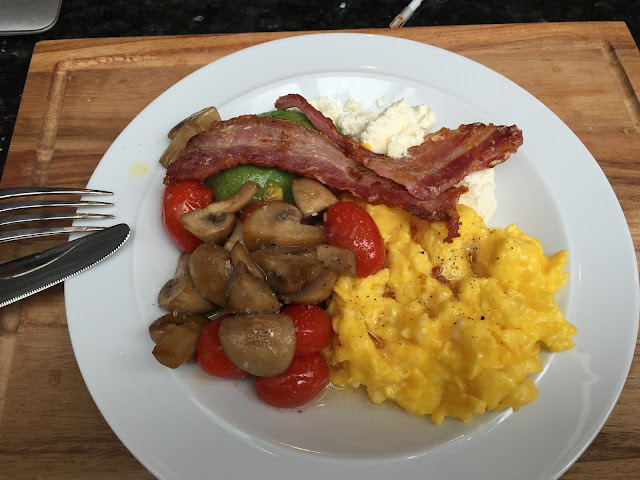 Dinner time now - and a richly deserved curry at Khanage - the best curry house in Wimbledon.
Posted by Norm at 18:25