We were due to make a tactical strike on The North this weekend, with a trip up to Yorkshire for the Go Beyond Ultra Round Ripon Ultra 35 mile trail marathon. This is my first attempt beyond marathon distance, my first trail race, and my first race with any kind of navigating - what could possibly go wrong?

I’ve been very busy at work lately, so haven’t had much time to go through the process of working out what I needed to take and wear - therefore, like a good triathlete, I took everything. 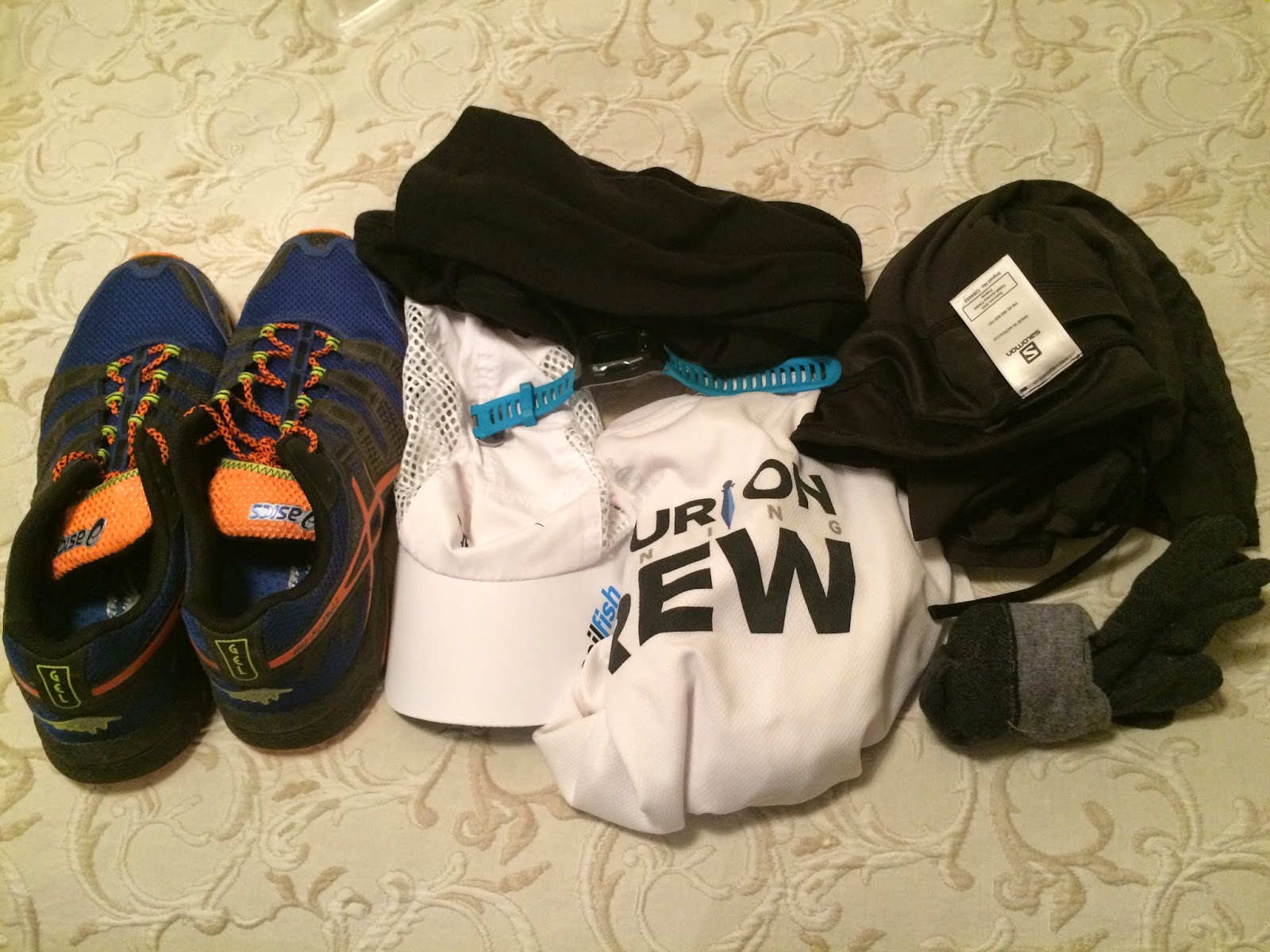 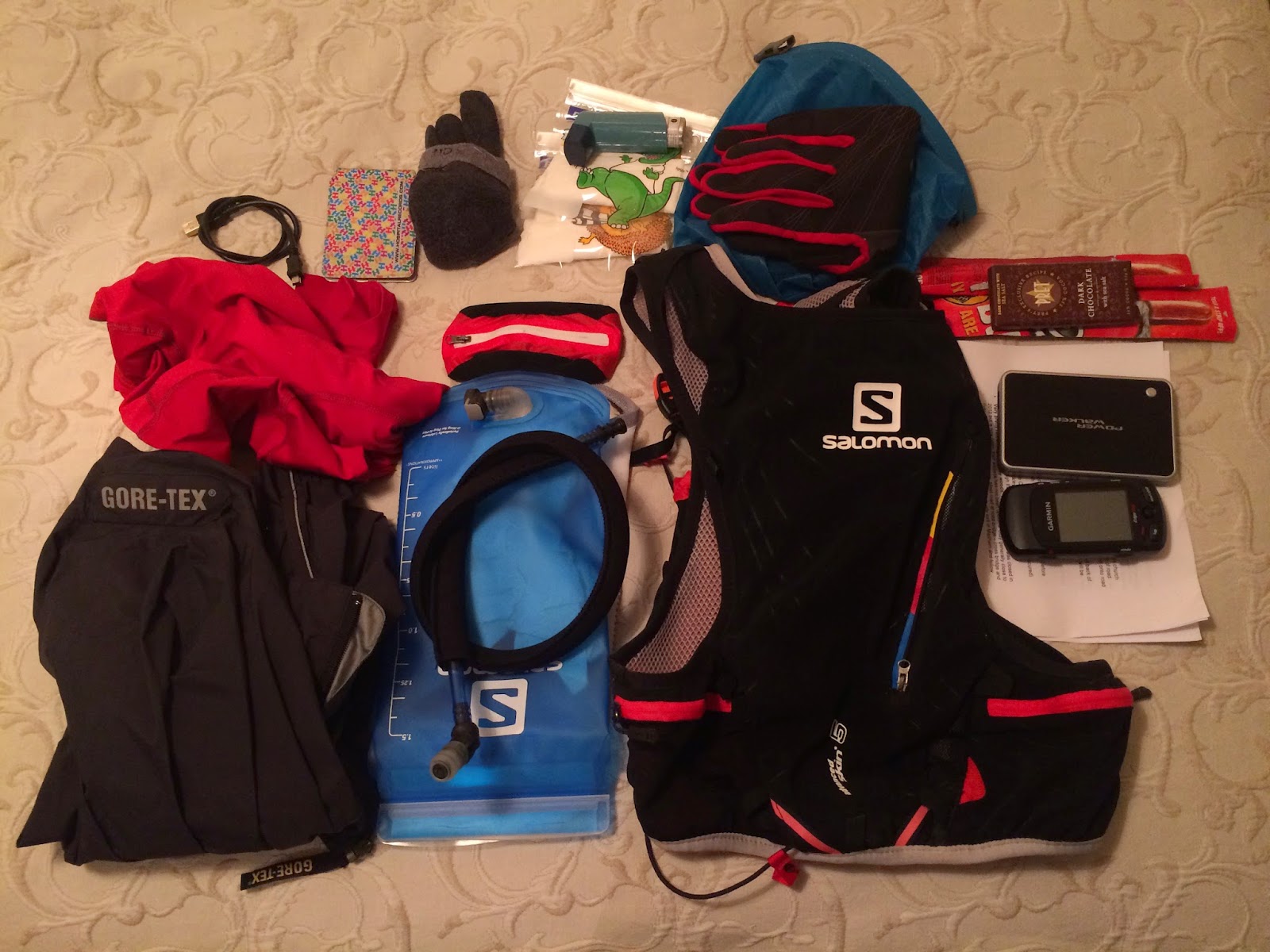 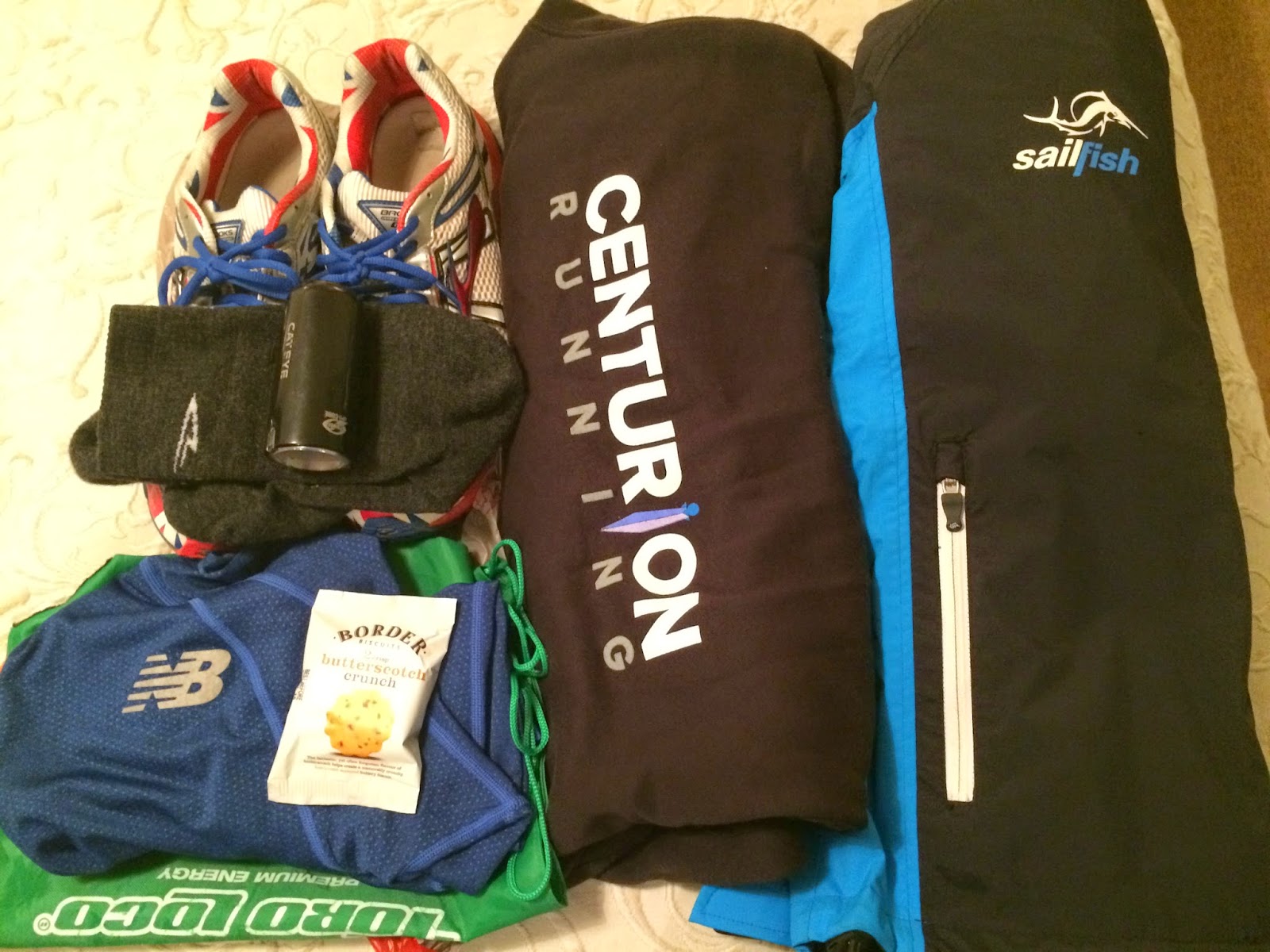 In the bag for putting on at the end

We stayed on a working farm called Mallard Grange, delightful but impossible for taxi drivers to find. There was a selection of semi-wild farm cats and kittens roaming around. Wherever you were, there were little reflective eyes keeping tabs on you form some dark corner. Peahens from the farm next door

Busyness has also meant training hasn’t been the best lately - I have been running relatively regularly, but not the long runs I needed to build up for this race, so I was a bit nervous - but excited nonetheless. I’ve supported Mrs in a few trail races and they look like fun, I was keen to be trying it first hand. 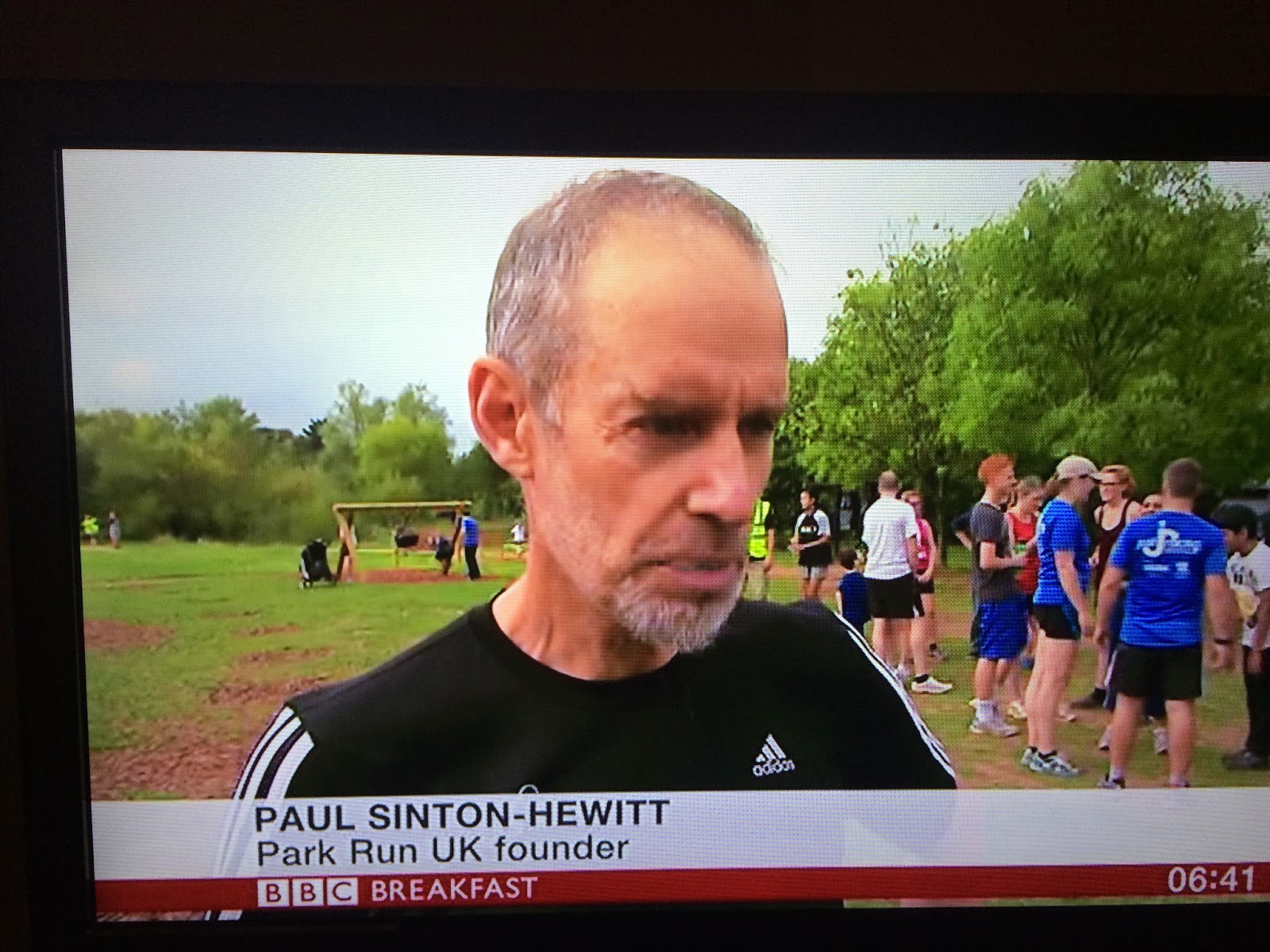 Let me correct that for you: "Paul Sinton-Hewitt CBE, parkrun founder"

Saturday 4th October was also the 10th anniversary of the first parkrun event. I was pleased to catch a segment on BBC Breakfast that had been recorded at Bedfont Lakes parkrun a few weeks previously. 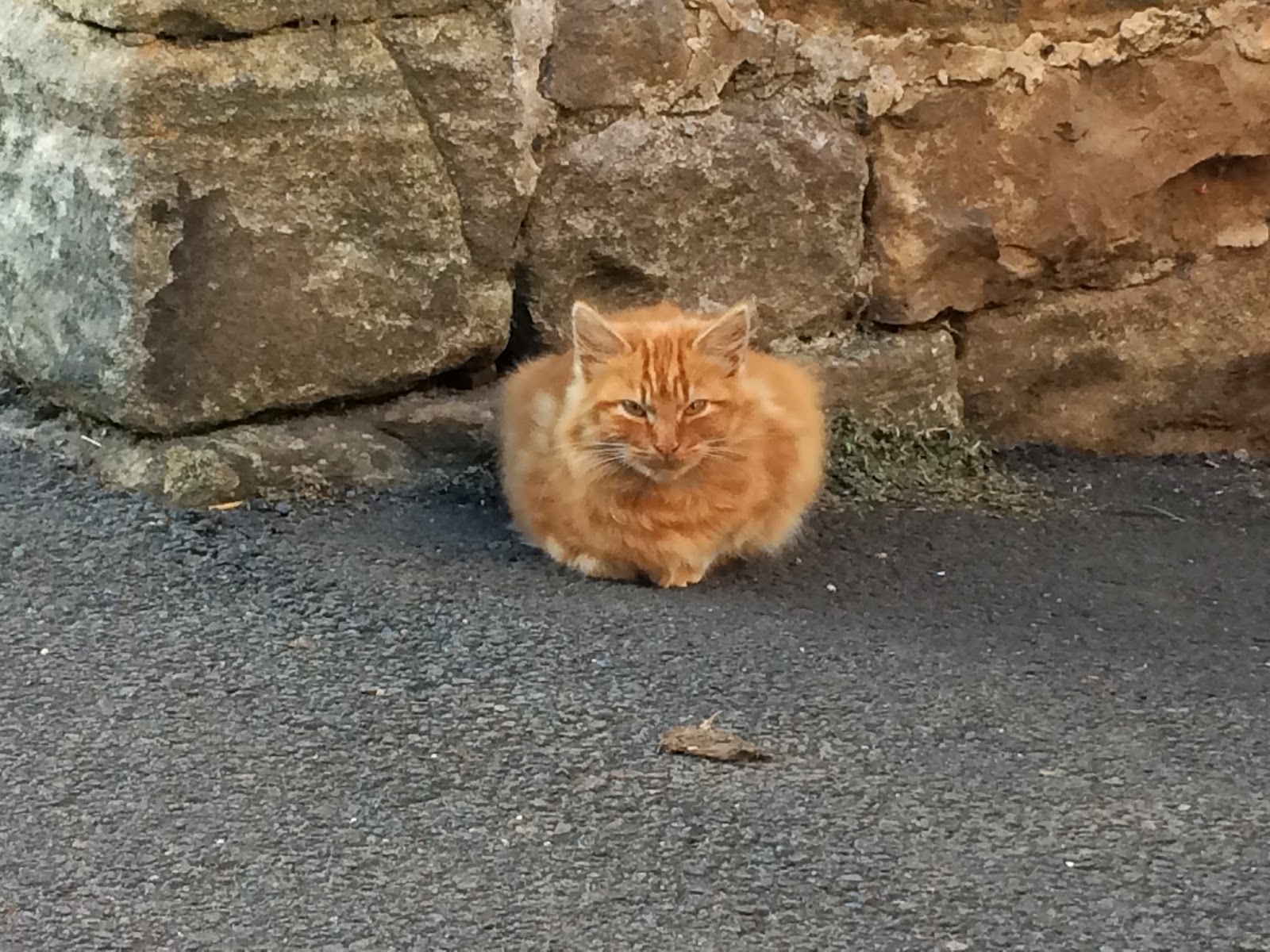 Little kittens like these are scattered all over the place

Maggie, the lady of the farm who managed the B&B, kindly gave us a lift the mile and a half or so down to the village hall in sniggeringly named Studley Roger where start and finish was. The route is a loop but does not, as the name implies, circumnavigate Ripon but passes through Ripon in the first few miles before taking a wide circuit around the local area. 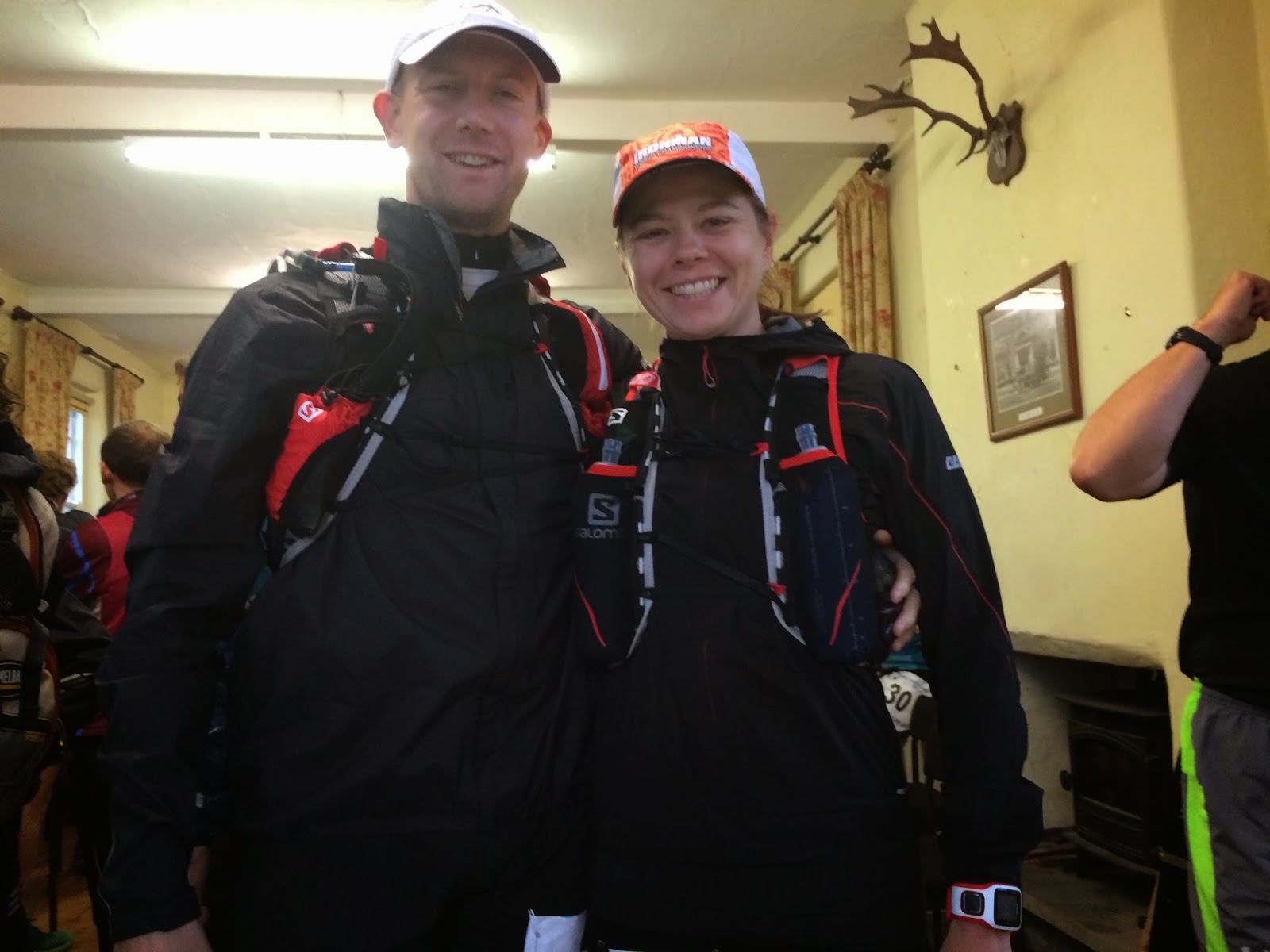 Ready for the off

It was very low key, no fanfare. A starting inflatable was erected a few minutes before the off. We had a race briefing in the hall. The main message was that although it was due to rain all day (the weather forecast we’d caught in the morning was ominous) it shouldn’t get muddy as it has been fair weather for so long in the area. The fresh rain will just sit on the hard ground. Good news - running through mud is very tiring!

There were around 80 entrants, with 20 DNS (did not start) - so numbers were down on the 100 or so of last year. We set off on the dot of 9am, just as parkruns all over the country were starting. 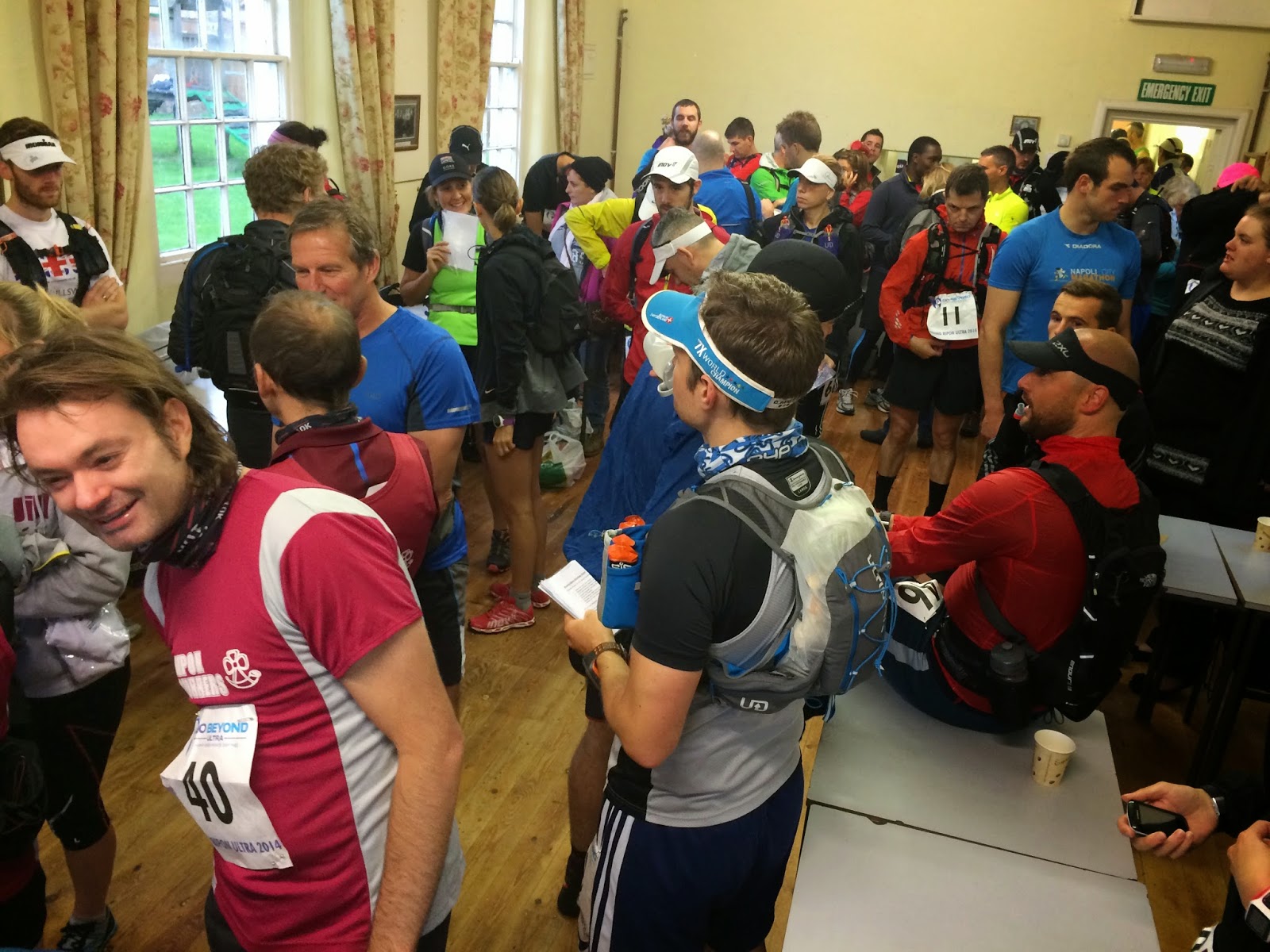 Milling about waiting for the race briefing

We set off at a fair clip, but not too fast. My Achilles tendons were a bit achy - seems to take them a while to warm up these days - I’d forgotten to do any mobilisation exercises before starting. Never mind, plenty of time to warmup whilst running. The rain was falling very lightly, nothing yet like the downpour we were fearing. 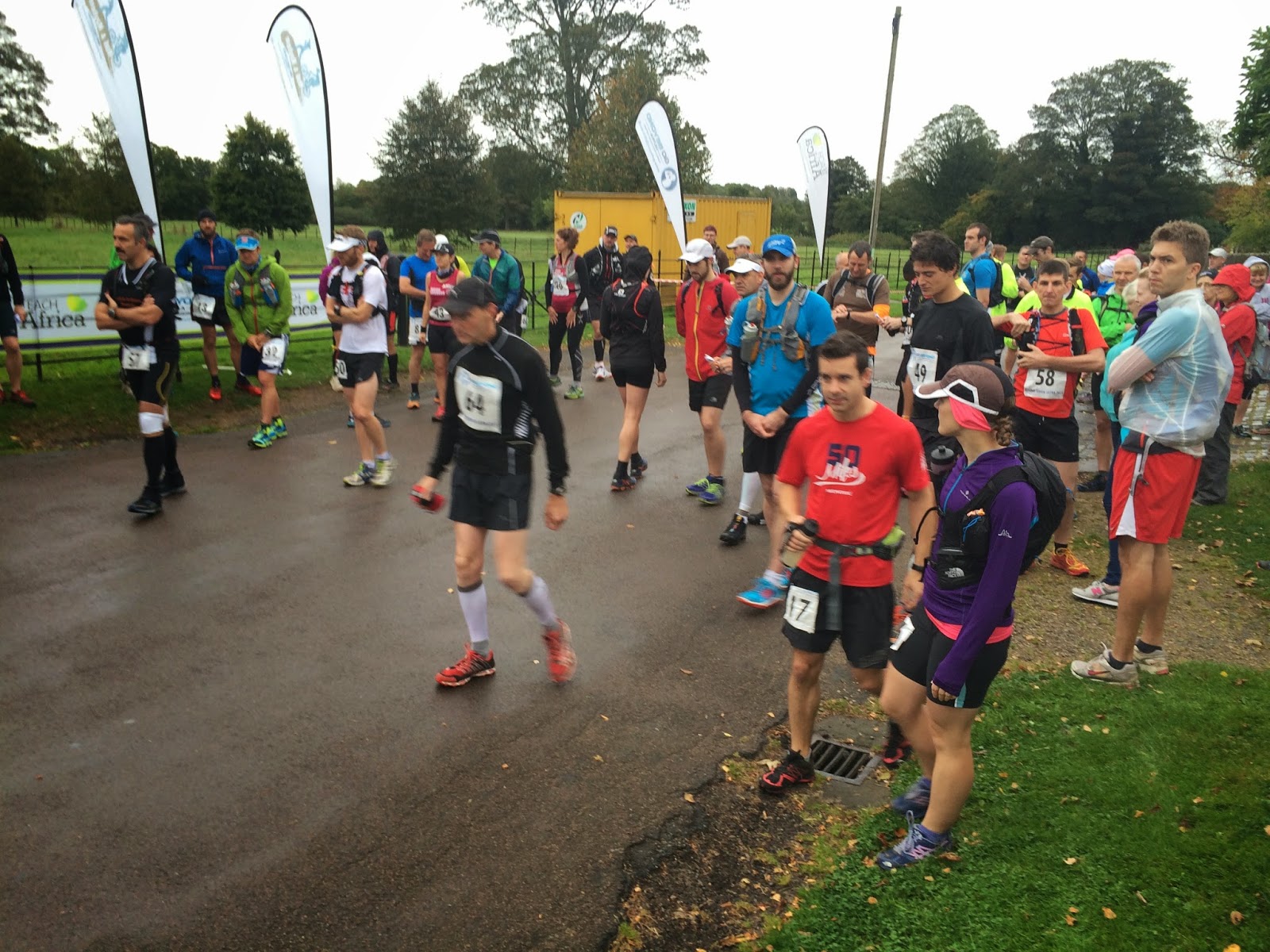 A few minutes until race start

Mrs had elected to run with me, which I greatly appreciated, though she was clearly having difficulty holding her pace back to stay with me - she’s got so fast these days! We got through Ripon quickly and headed out into the countryside. 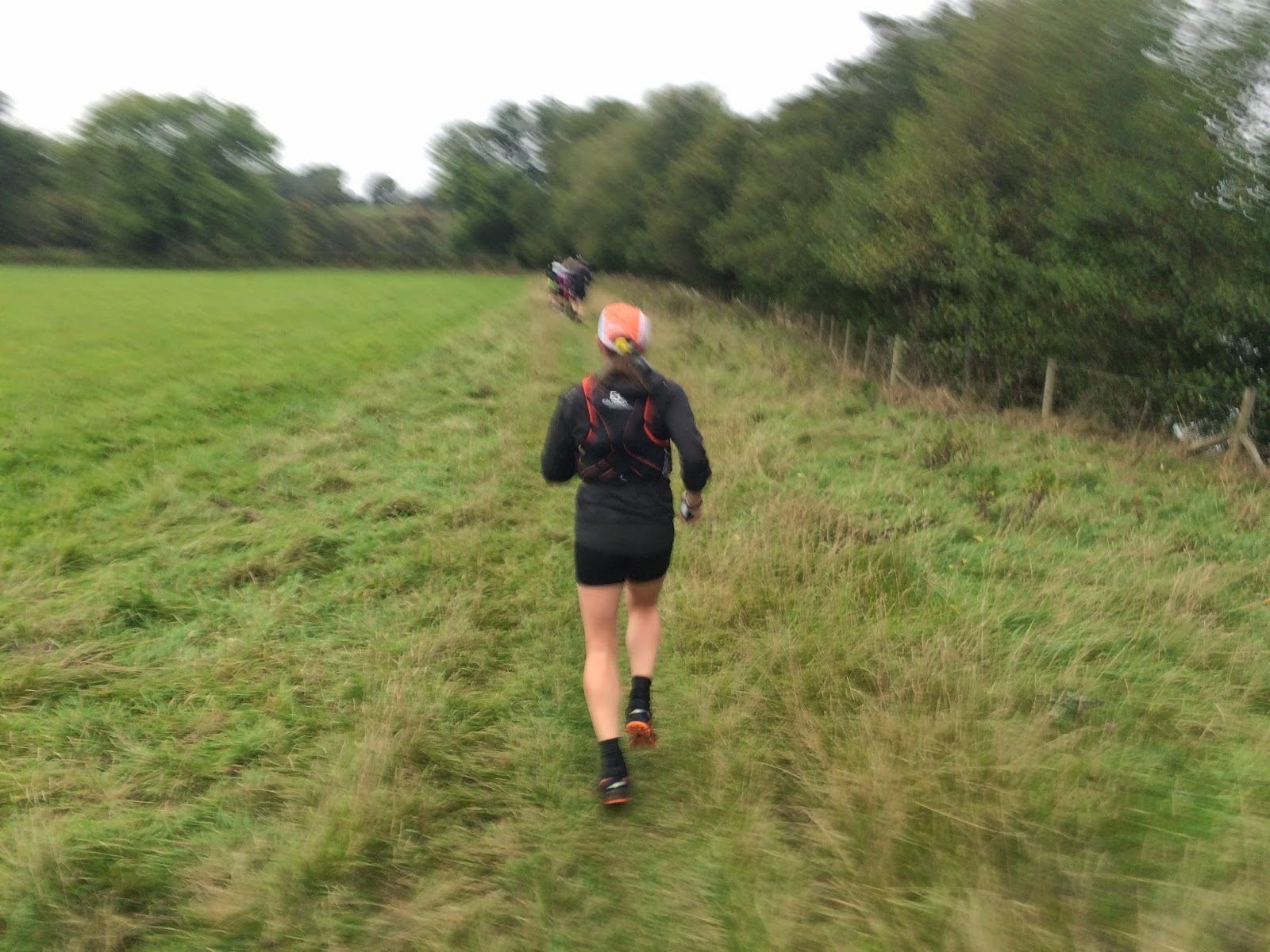 My view for most of the day - she's so fast these days!

I really enjoyed running on trails - much more interesting than roads, and the time flew past. We quickly got to CP1 (checkpoint 1) and as neither of us were hungry or needed to refill our water, we ran through - making about 5 places in the process. Mrs learned at Rowbotham's Round Rotherham Ultra last year it’s too easy to lose time at checkpoints, and that time adds up really quickly. We weren’t out for a target time, we just wanted to finish within the 10-hour cut off, but there’s still no point hanging around for the sake of it. 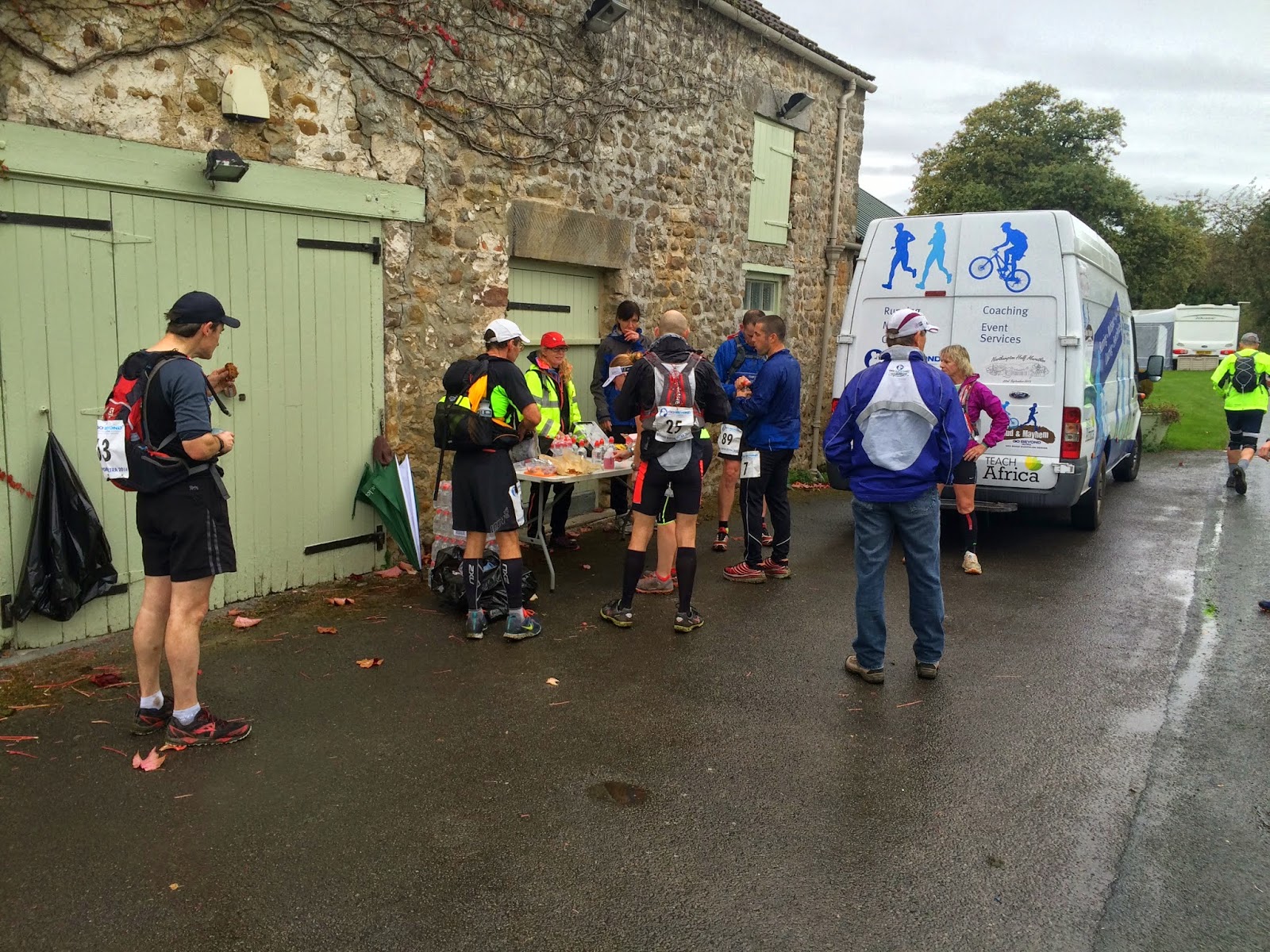 CP1 - there was cake! We pushed on through though, barely warmed up!

We’d elected to run 8 minutes, walk 2, with extra walking up hills and extra running down hills. This was a tactic we’d employed at the Wales marathon in July, and in a couple of training runs since, and it works well.

The route was really enjoyable and had so much variety. Wide stony paths, narrow twisty trails, across fields, through forests, and down by a river. One section in particular through a forest was great fun - I’d never been on a run like this before, it was great fun and we weren’t doing too badly for pace. 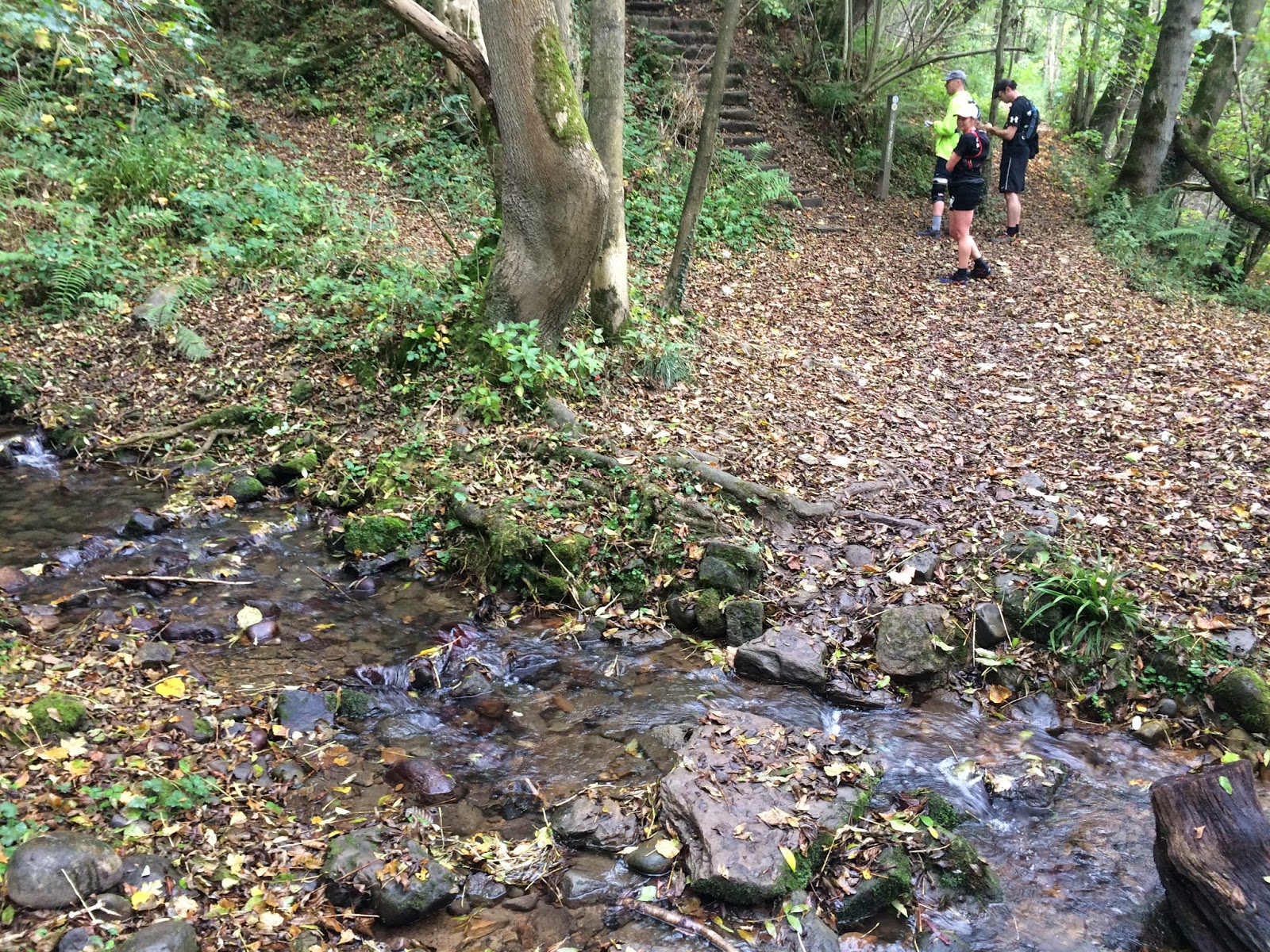 Near the end of the forest section - up the stairs or not? (we chose "not")

Towards CP2 I was starting to get a bit grouchy - although I was enjoying it my legs were complaining. I think the sheer variety of surfaces was making me more tired than I’d expected. CP2 arrived and we refilled water - I felt happier and we set off.

Very soon though I started to feel a pain around my left knee - a very familiar pain! I’ve been here before and there’s only so long you can push on for. It started to complain about any rise, and descending wasn’t much easier. I’d make it to the next checkpoint, but there I would have to pull out. 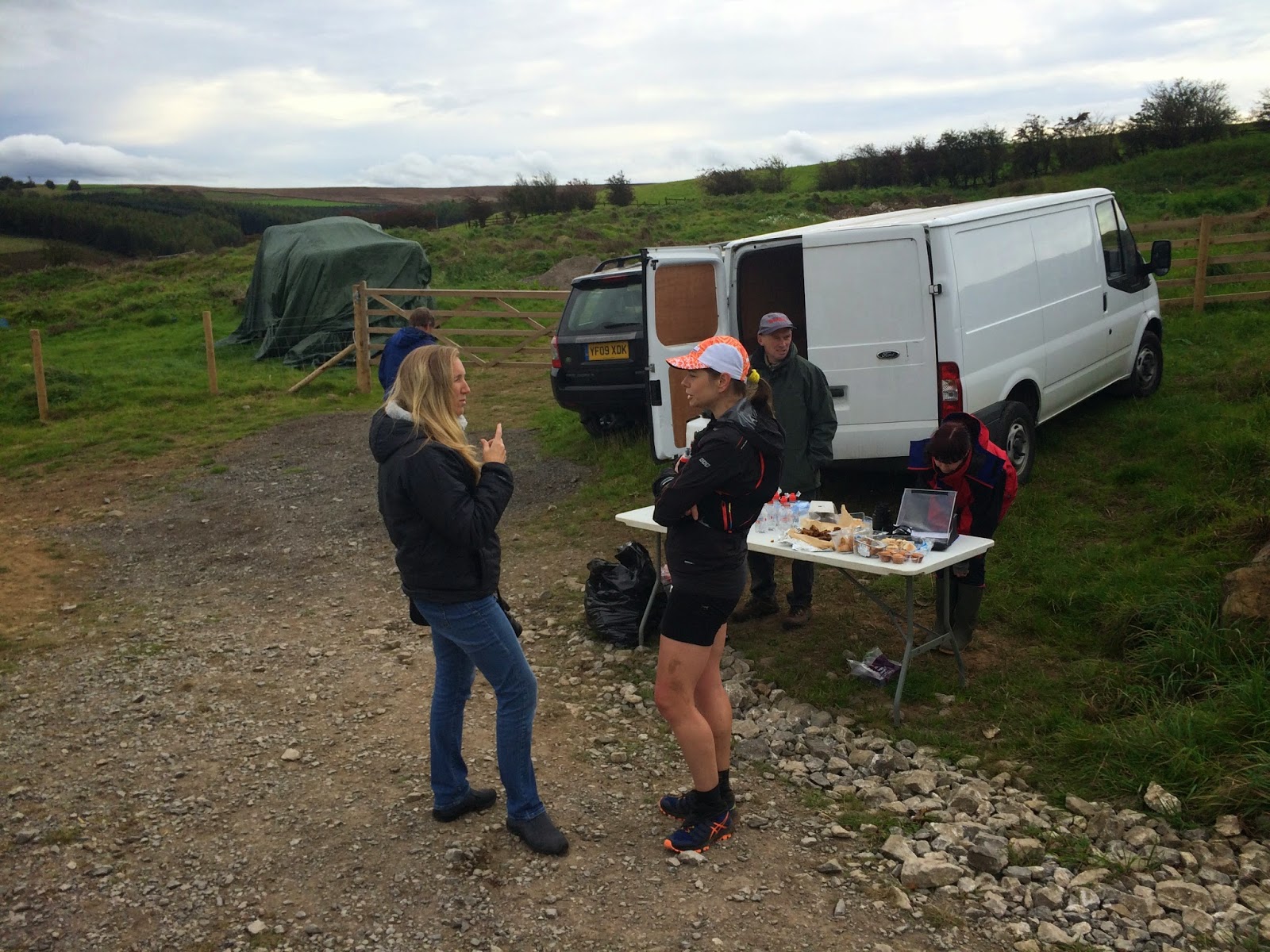 CP3, where we unfortunately called it a day

Mrs stopped with me, which was really nice of her, and we chatted to the support crew and went for a coffee in the posh café of the Bivouac "glamping" site where the checkpoint was. 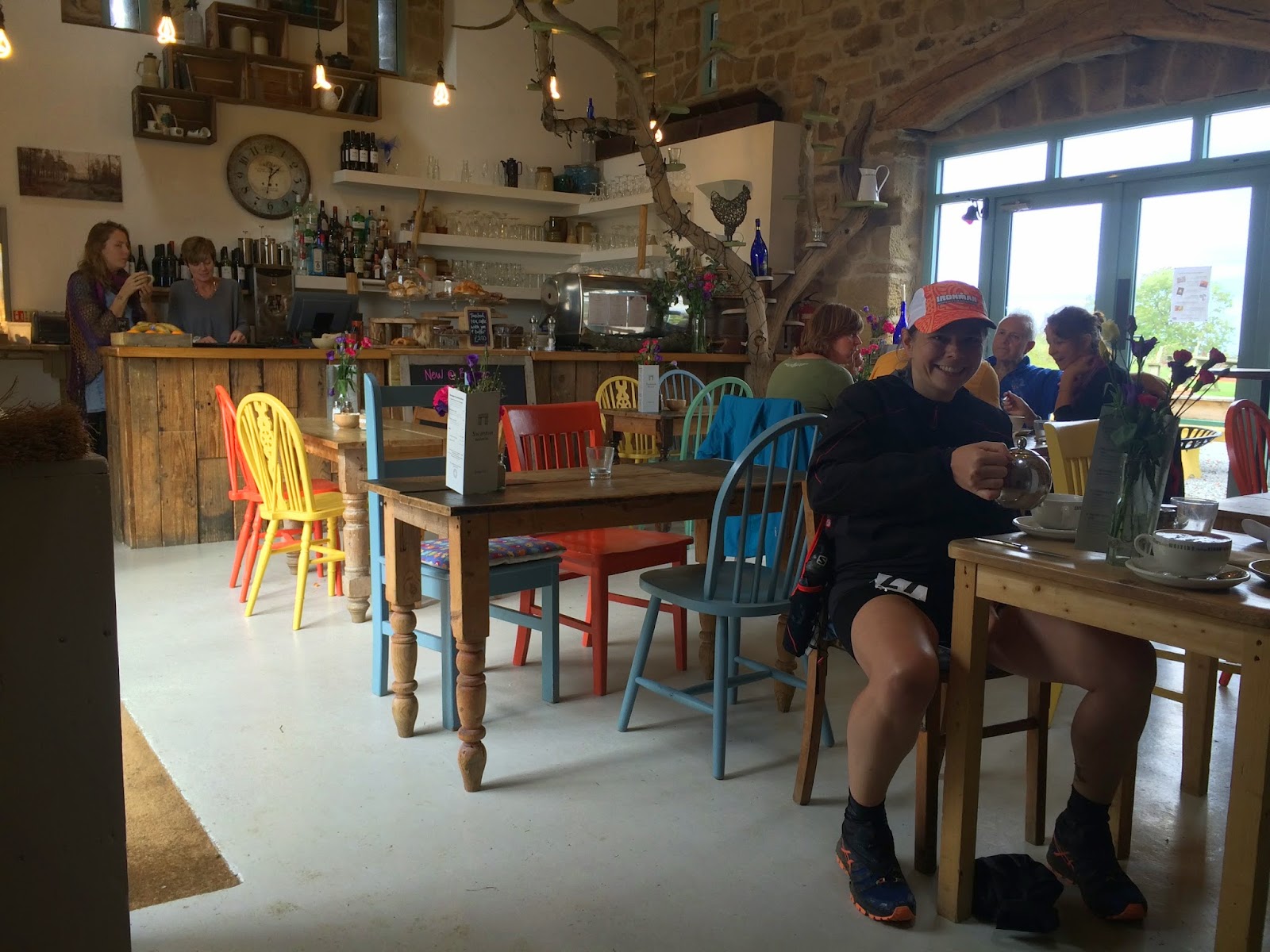 A welcome coffee in the warm

Chris, chairman of Ripon Runners, was helping out at the checkpoint and offered to drive us back to the start to collect our bags, then back to where we were staying.

Elevation and pace for the first 20 miles

It wasn’t the day I’d hoped for, but I still covered 20 miles in about 4 hours. If it was a marathon I’d have pushed on for the last 6, but I didn’t feel I could make it 15 without hurting myself more and possibly more seriously. As it is today (the day after) it’s a bit twingy, but will recover quickly. 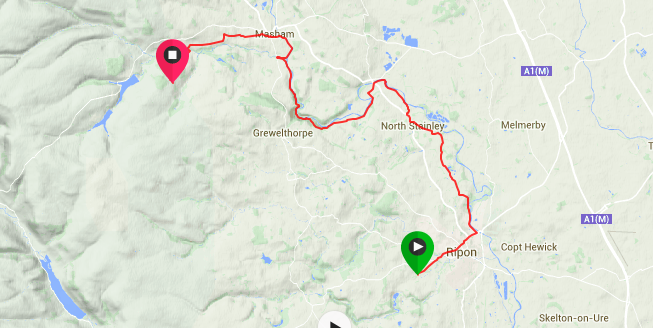 Not quite round Ripon...!

Before attempting a race like this again, and I certainly will be trying it again, I need to make sure I’ve done some more specific (hilly, trails) training. I don’t think my problem is general strength or fitness, I just need to be a bit more targeted. My legs have never been so strong, thanks to the boys from The Athletic Edge, but when every step is different to the one before due to the terrain you need to be ready for it. 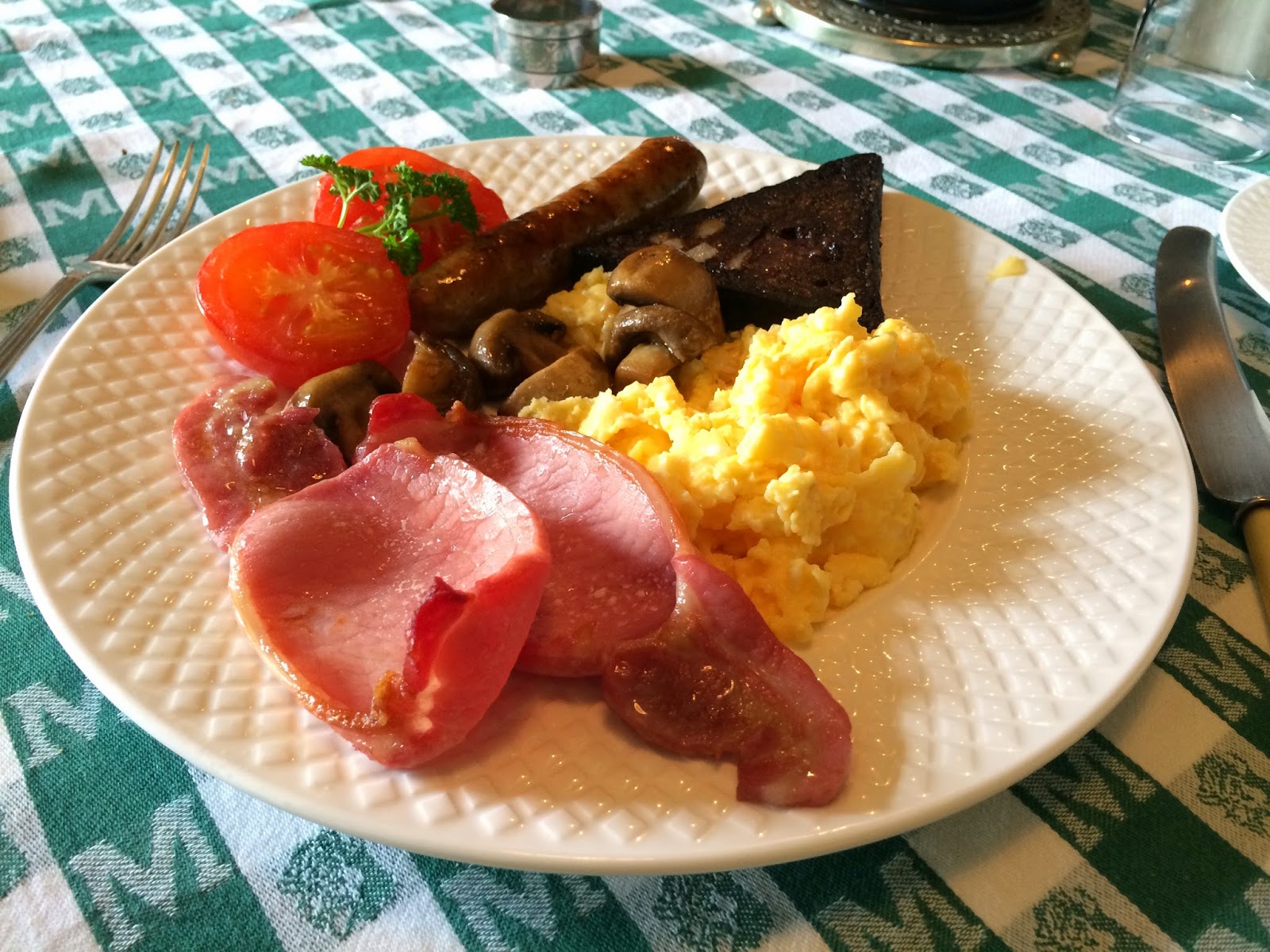 A hearty day-after breakfast - this went down very well I can tell you! 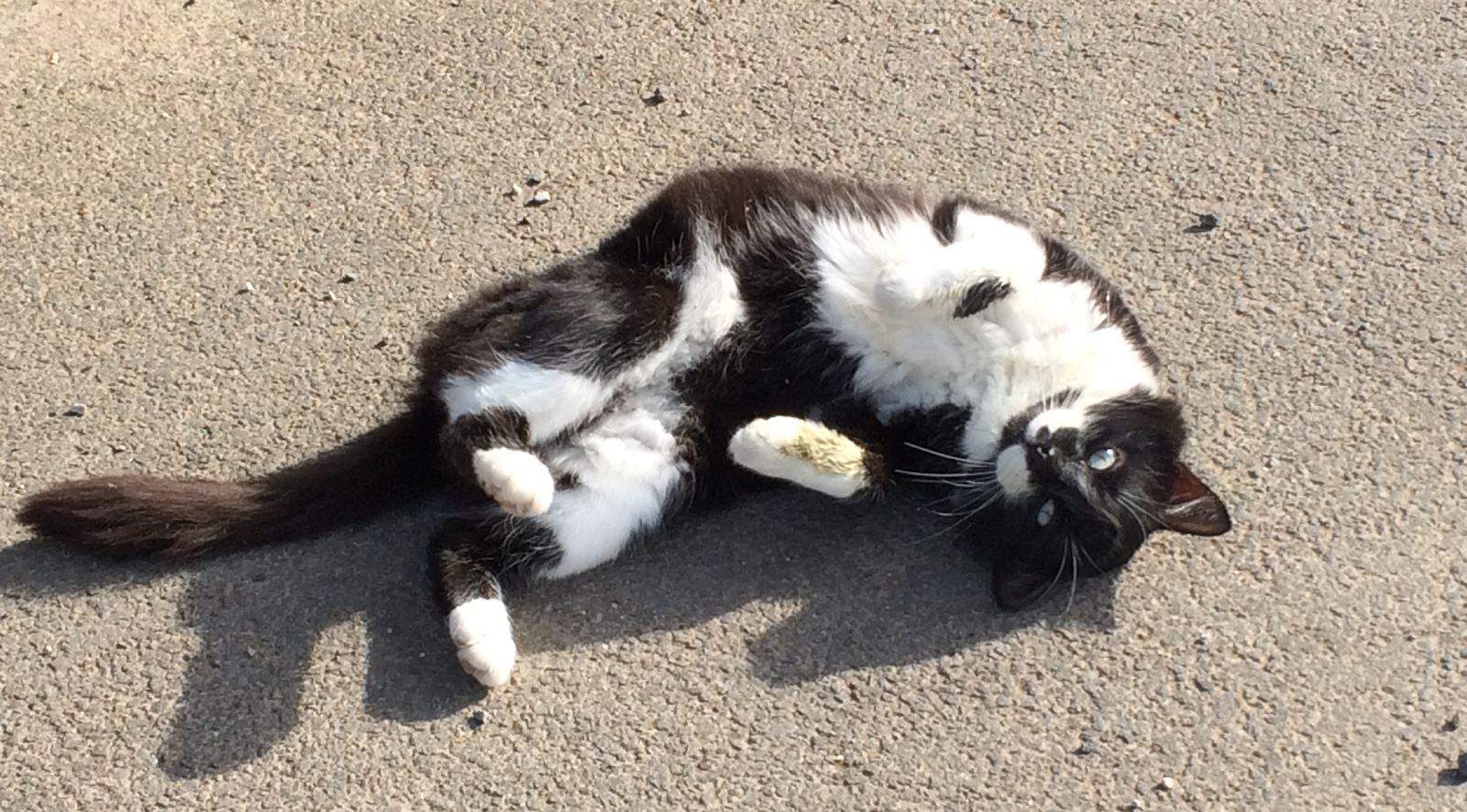