I have had a previous attempt at an ultra, and it didn't end well. I had to stop after 30km with my old friend ITBS irritating my knee. I have wanted to take another go for a while. On a whim I signed up for the Croydon Ultra about 6 weeks ago. I've been running relatively regularly, and relied on running every day in June (Juneathon) to give me what I needed.

I went to check the circuit out a fortnight ago, and didn't enjoy it too much. So I went back for another go a few days later and had a much better day. I still wasn't entirely confident I'd make it round two laps, but it was worth a shot. 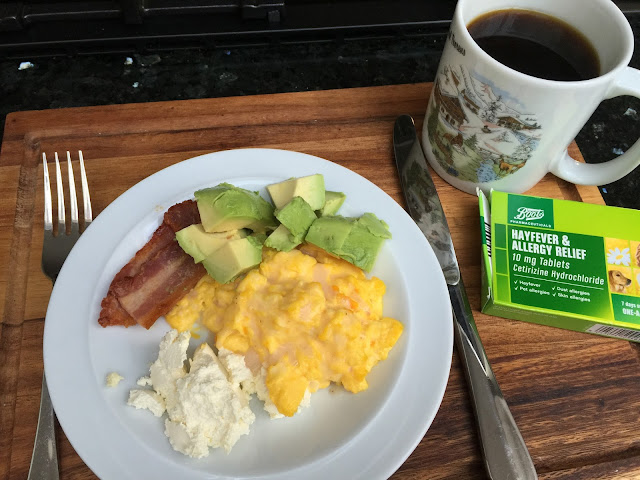 I got up early and ate a normal breakfast before heading out. I know I can do three hours of exercise on a cup of coffee, not sure about six! The night before I made a couple of snack packs too - a boiled egg, stick of cheese, and a bit of bacon. I was going high-fat low carb all the way, no cakes, sports drinks, or sugary sweets for this athlete. 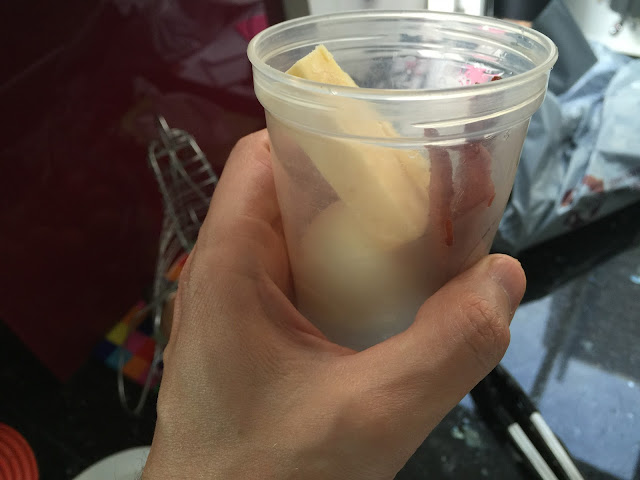 The trip to the start was easy, just 30 minutes on the tram. The two-lap course meant easy access to my bag at half way so that, plus an aid station half way round, meant very little to carry. I wore my trusty Flip-Belt with iPhone and inhaler, then in my shorts pocket an emergency bank card, cash, and copy of the route. Pretty sure I didn't need the instructions thanks to my familiarisation runs, but better safe than sorry.

Race start was at 9am, and at about 8.45 it started drizzling. By the time we started it was really raining hard. I decided to go for shorts and a vest, expecting warm dry weather - at least in a vest I wouldn't get bogged down with the weight of wet clothes, or poach myself in a waterproof top. 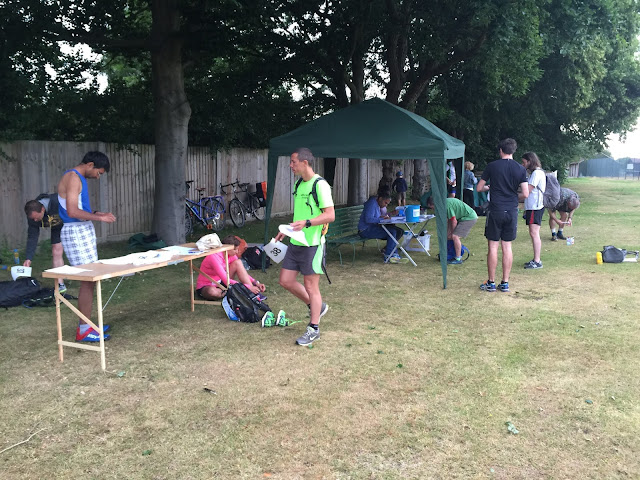 Registration - before the rain

At 9am on the dot we set off. There were around two dozen of us. A lot like the most recent 2nd Sunday 5, everyone shot off into the distance. I was fairly sure that within the first kilometre I was in last place. I didn't mind, I'm OK with that. Maybe they'll come back to me later, maybe not. For me it's about getting round.

There were a reasonable number of orange arrows painted onto the floor at opportune moments, and a few orange streamers tied to trees. Better markings than I was expecting for a small low-key race.

The rain continued, and I held a good pace. Jogging along the flats and downs, walking briskly up the hills. The White Bear aid station came round fairly quickly, I had a cup of water and a surprise piece of cheese (I was surprised, not the cheese) - nice to see something other than the usual sugar fest - maybe ultras are more accommodating? There wasn't any coke/pepsi, just flat water or orange cordial - it looked somehow more appropriate than the sugar-fest aid stations I'm used to from Ironman.

I'd enjoyed the first half of the lap, it's interesting and mainly trail. The middle section was country lanes, bit boring, and then the last part was mainly around suburbs - quite housing estates and some seriously nice houses.

I got back to the start to see two runners just leaving, maybe I wasn't so far at the back after all. I stopped for a few minutes, I don't know what my mid-point time was, I'd already decided I didn't care (within reason) about the time - it was about finishing. I was wearing my Garmin and it was recording, but I was just ignoring it. It buzzed regularly as the kilometres ticked by, but they passed uncounted. I consumed one of my snack pots - it was good! Felt so much more reviving than an energy bar or gel. Setting off from the aid station to start the second lap I was still going OK. I clearly had a few hours' running in my legs, but I wasn't too tired. I enjoy the first third of the course, on the vanguard way, and was looking forward to seeing it again.

It had rained all the way round lap one, but had slowed to a drizzle now. The trail section was a little slipperier but still manageable. I'd made the right choice by picking my shoes for the two-thirds of the course that's on-road, not the third that's trail. After three or four kilometres I caught the pair who had left in front of me. They looked very tired, we exchanged greetings and "hang-in-there"s, and I pushed on forward.

My first twinge of worry was following the transition to the road section. I pushed a little to keep my rhythm on the flat, but couldn't run down the hill - yup, knee pain! Before long I was finding it hard to run for any more than few minutes, the pain built up gently until it made me stop, then I walked a bit, then I could run for a few minutes again. 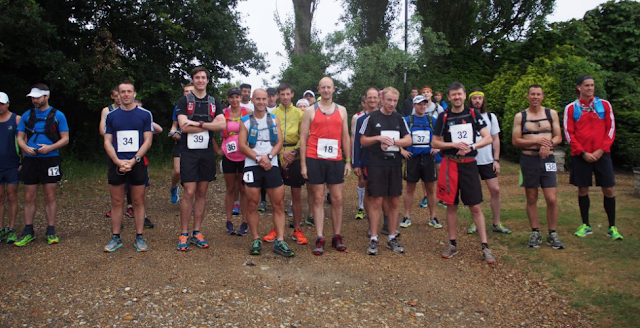 By the time I hit the mid-point aid station I couldn't run at all, but I could walk - and I could walk fast.  For some reason that was fine. I was determined to finish - I need to pop my ultra cherry! I decided there and then to power-hike the whole second half of lap two, and not do any more damage by trying to run.

While I was there one of the pair I'd overtaken arrived - from the wrong direction! He'd lost the guy he was running with, and then got lost, and eventually chopped off the whole bottom end of the circuit, so he came back up the course to the aid station to get the distance covered. It was his first ultra, he was determined to get a finish too.

I set off at quite a stride, visualising the various sections of the course that remained - walking it in for 7.5 miles was going to take a while. My knee seemed OK on the flat but was complaining increasingly on gradients. At one point even walking up and down kerbs was uncomfortable!

Finally, now with sore feet because my shoes were certainly designed for running and not walking, I rounded the corner back to the aid station. 30 miles done - 22.5 running, 7.5 walking. Still, to get the bling all you have to do is get to the end - and I got to the end, so I get my little medal :)

Look at that drop off in pace!

I'm still not sure I'm an "ultra runner", but I certainly covered an ultra distance, and completed an ultra race, so that's good enough for now. Since Sunday I took Monday off exercise, and today (Tuesday) I cycled home from work. Knee is absolutely fine - as soon as the irritation subsides I'm back to normal in no  time. 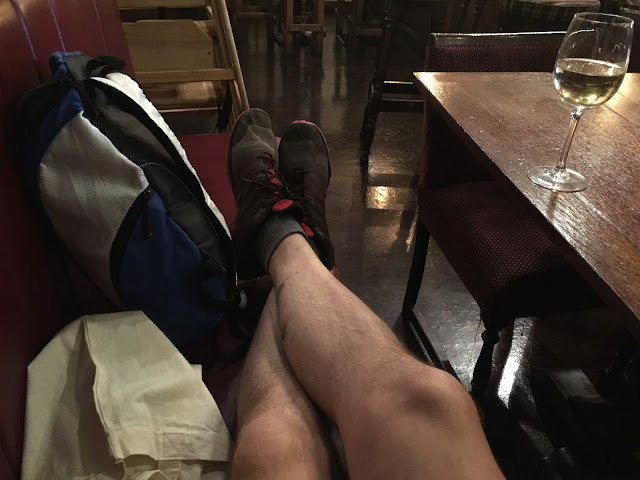 We have a train strike for the next few days, so I'll cycle for the next couple of days too, then parkrun on Saturday (of course), and the third 2nd Sunday 5 trail race on Sunday, which I should be right as rain for. 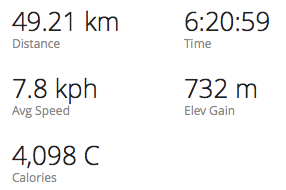 I think I'm going to stick to races that are just up to and including half marathon for a while. I'll try longer again at some point, but I'm not going to get over excited and enter loads of races (I was kind of considering some 50-milers next year - but there's utterly no point if it's 25 miles running, and then 25 miles "walking it in").

Still, it was fun, and I had a nice day, and I'm pleased I showed some resolve to get to the end and not give up. Job done :)

Race photos are here, but apart from the start line shot I was too slow to end up in any of them! The official results are here, together with a short blog post form the organiser. The men's race was won by last year's winner, David Ross, in a new course record of 3:43. The women's race was won by Daisy Rolfe in 5:02. I eventually rolled in at around 6:20, but I managed not to come last! 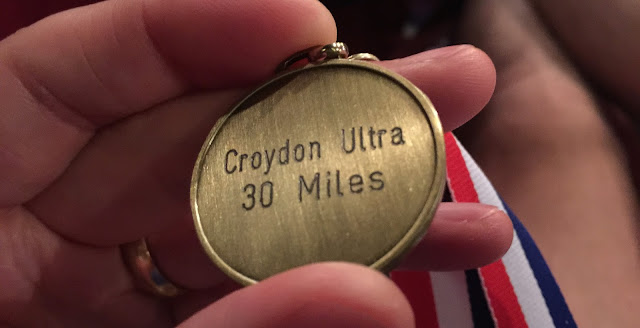 I'll take that, thank you very much :)