The third running of the Thames Hare & Hounds 2nd Sunday 5 - the new regular 5-mile race held on the second Sunday of every month. It's a great little run, low-key and "local" feeling, but with good running club standards from the TH&H members that I get some stiff competition. Last time I managed to come last, despite putting some serious effort in, so this time my race objectives were triple-printed: A) Don't walk up the Toast Rack; B) Don't come last; C) Go for a PB.

I drove up to the Windmill carpark on Wimbledon Common, it's a couple of km from the start/finish so a jog down makes for a good warm-up, and a gentle stroll back is a nice cool-down afterwards.

Today's run was a little different, it was doubling up with a local school for their off-road fun run. At the start there were a couple of dozen little kids - everything from three to maybe seven or eight years old would be my guess.

They looked cute with their giant race numbers on, and there was lots of excitement from them! I was expecting them to be doing a lap or two of the playing fields, or "out round the cone and back" - but nope, they were doing a full lap of the same course the grown-ups were! A little over 5km, all off-road, including up the Toast Rack!!

The kids had a great little warmup, jumping and bouncing, and then we all lined up to start. I was a bit concerned... I've seen kids start at the front at parkrun and the big risk is they just get mown down - but not this time. The little darlings shot off into the distance, leaving us oldies for dead! I laughed out loud for the first minute or two - running surrounded by tiny kids was hilarious - they were going at absolute full tilt, and all the parents were lagging behind yelling "pace yourself!", "slow down!", and the like. They'd slow down dramatically, then speed off past you again, then slow down - it was certainly not like any other run start I've experienced! 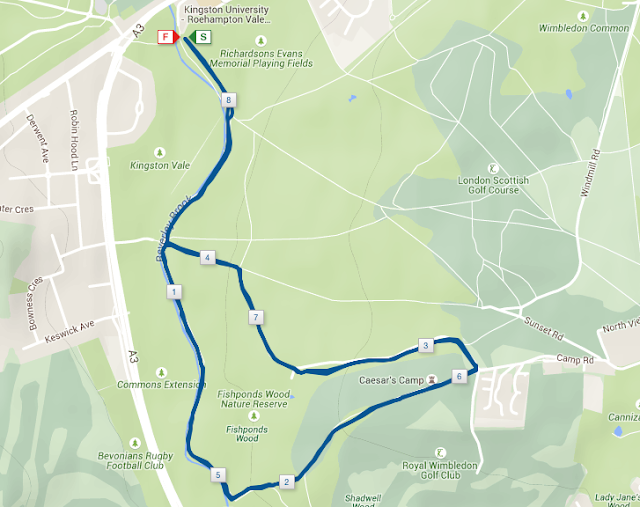 The usual layout, 2 laps for the 5-milers, one for the children

In any case, it was perfectly safe and I didn't see any collisions. And you know what? Quite a few of those tiny kids disappeared int the distance and I never saw them again...

I found a good pace, including running up the Toast Rack hill, and pushed down the other side. I'd overtaken a few of the kids and was running mainly on my own. Coming to the end of the first lap the kids and parents turned right to go back to the start/finish, and the 5-milers took a left for a second lap.

After the corner I could see a few people in the distance, including the woman I'd had a sprint finish to beat in the first race back in May. I kept the pace up and managed to run (sort of!) up the Toast Rack for the second time - first time in the three races I've not walked a bit. I overtook one of the cluster in front (yay! not last!) and set my sights on the next person.

Pace and altitude: Spot the Toast Rack x2 and the sprint finish

I overtook him a few minutes later, and still had the woman in my sights - she was also finishing at a good pace. Completing the second lap, turning right this time, and just under a kilometre left. I managed to reel her in a bit, and as we turned for the final 200m out of the forest and onto the playing fields, I pushed hard. I was certainly gaining on her, but there just wasn't enough race left - plus I was running out of lungs and legs. She beat me by about 20m.

The hard finish was good for my time, certainly a 2nd Sunday 5 personal best. The course start/finish was again in a different place so we've had three different routes now. I'll keep track of average speed as well as overall time.


I'm very happy with that - good progress over the three months. My long-term objective for this race is to get under 40 minutes.

I was amazed by the tiny kids - some of them ran really hard and didn't slow down at all (I certainly hadn't caught them all on my first lap). A real contrast to a parkrun I was at recently where I heard a mum tell her crying daughter "5km is too far for little girls, you can run when you're older" - tell that to this lot, over 5km, all off-road, including down the side of a river with steep banks - and they were fast as anything.

When I was walking back up to the car I saw the youngest of the children finishing, a child laughing and happy just going down the field toward the finish area. She was no taller than my knees, and seemed to have had the best morning ever! A good reminder of just what kids are capable of - and it's normally far more than we realise.
Posted by Norm at 13:33