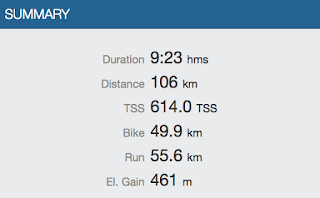 On any normal Monday after the hills of the weekend I'd take a day off, but as it's June I decided on jogging very very slowly round my MVR (minimum viable run). It's the return of the 5km local loop.

5km local loop day two, legs felt like they'd welcome a bit of a shake out, so I added some strides. Strides are a gradual increase in speed until you're almost sprinting but not losing form, and then a "float" of 20m or so and then freewheel back down to jogging.


Each stride only takes about 30s in total, and the aim is that you don't get as tired as the lag between output and heart rate is such that your legs and neuromuscular system get a good work out, but it doesn't spike your heart rate so much - therefore the recovery required after the session is lessened.

5km local loop day three. Tired. Set out to jog round at even pace. Uneventful. Nothing to report.

Guess where I ran today? Yup, 5km loop day four.  This route is functional: I need a run, I have no imagination, let's plod round the block. This time I decided to go for a "Royal Flush". This is a Marathon Talk term to mean each mile or kilometre faster than the one before.

I set out slowly with this in mind and ramped it up - I didn't feel fully recovered from the weekend yet so started very slow. I've got it wrong when trying this before, if kilometre 3 is a bit fast, then kilometre 4 has to be even faster, leaving kilometre 5 to be an all out sprint - OK if you're ready for it, but today I wasn't!

A change of scenery for today. After cycle commuting to work and back, I drove down to Lainston House near Winchester after work where Mrs and I were spending the night. Asked reception if they had a running route - there were several to choose form, all clearly marked.

I set off to get my daily minimum 5km in and didn't see a single route marker, so I just made it up. Coincidentally, was passed by Mrs in a taxi from the station while I was out! A bit more hilly than I was aiming for, but I felt good. 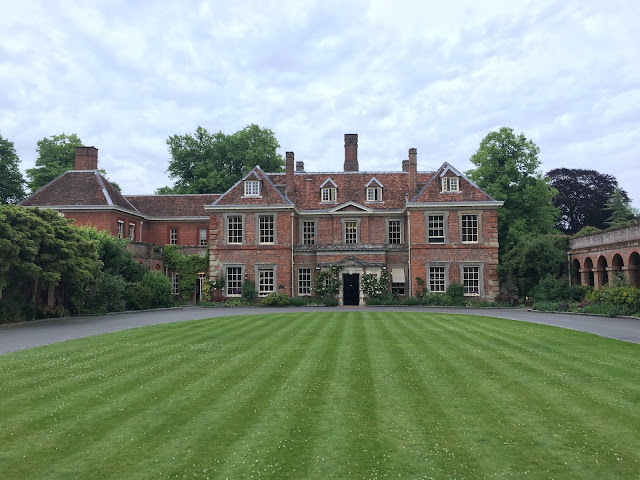 Saturday = parkrunday. We headed down to Eastleigh, one of the older parkrun courses which this week was holding it's 311th event.

The course wasn't the most inspiring to be honest, loops up the side of a shallow hill in the beautifully named Dragonfly Trail Park, then returning round to the start. 3 laps. The support was good from the locals, including an older chap in a deck chair with a school playground hand bell - every time he rang it I thought it was time to come in from morning break. Almost drowned out the sound of the M3 :)

It wasn't the best run for me, it was incredibly humid and all on grass - not good weather for me. I sweated heavily all the way round, which never puts me in a good mood.

After the run, we had a reverse panic drive. Normally the stress is getting to parkrun on time, today it was trying to get back to the hotel by 10am to catch breakfast service! We made it (well, we were 2 minutes late but it didn't matter) and had a glorious cooked breakfast. I'll definitely be returning to Lainston House for a longer stay, it's beautiful.

The main run of the week, and an early start to get out to Wendover. I was running on the Chiltern Challenge Ultra route again. It was raining but not cold, a t-shirt and arm warmers plus waterproof shell layer kept me perfectly comfortable. 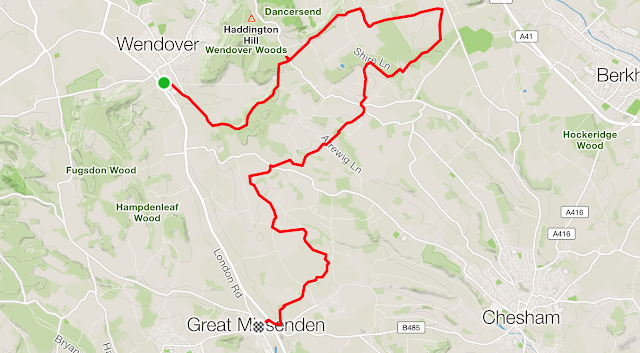 My legs are very aware of the now 12-day run streak. I remember this from last year, fatigue bulls up over the first two weeks and then you just kind of get used to it - as long as you're not going hard every day.

This was a reconnaissance mission, so no intention on going hard or fast, quite the opposite. I jogged along, and walked a lot. I gave myself permission to do this, and it felt good. Normally walking means a hill or you've overcooked it in the early stages - but in the longer distances walking (hiking at a reasonable pace rather than strolling along) is an important race technique. 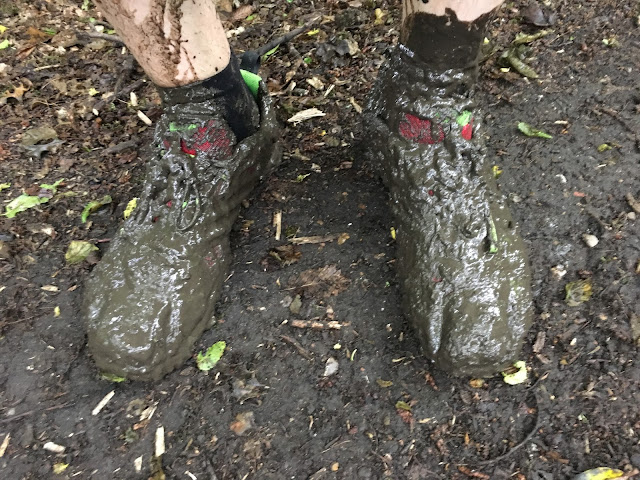 I may have misjudged a muddy spot 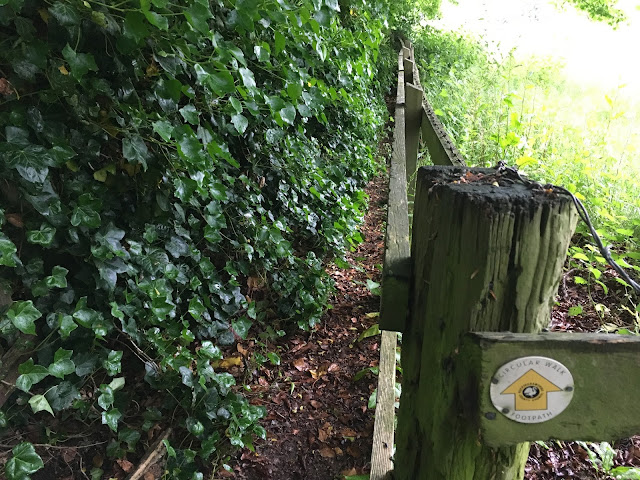 Apparently, this is a path

I was planning on looping round back to Wendover, but decided after nearly four hours for 25km I'd call it a day at Great Missenden. I grabbed a coffee and headed for the train.

It was a good run today, nice to see a bit more of the ultra course - five weeks until race day! Eeeep!!
Posted by Norm at 19:28