I'm on holiday at the moment, and following on from last year's tradition of entering local races (I absolutely loved The Cumberland Ale 10 and The Lancaster Half Marathon), we entered a couple this year too.

Our first is The Freckleton Half Marathon; it claims to be the oldest half in the UK. This year was its 52nd year, and the 40th year that it's been a mixed race. The first 12 years were men-only because it took a somewhat embarrassing amount of time to stop being concerned about wombs falling out under the strain of sporting activity.

We set off from our holiday cottage in Ambleside at a bit before mid-day; the race started at an entirely civilised 2pm. Lucky, because the night before was our first night on holiday and I may have indulged in a little liquid refreshment...

We arrived at Freckleton in good time, and signed in to get our race numbers. It was a proper village feeling event with lots of atmosphere. 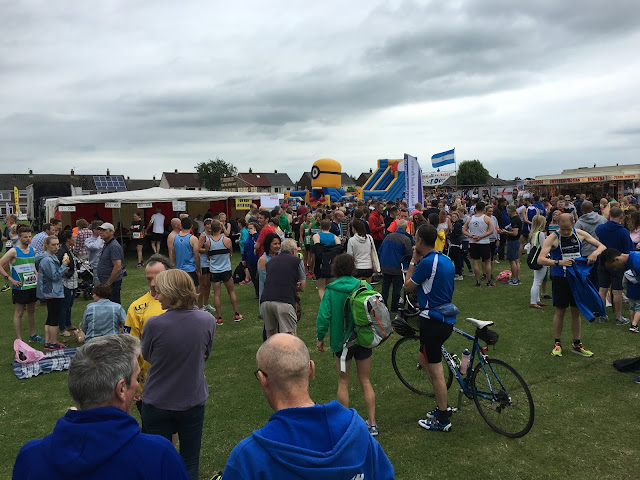 We had a small warm up ahead of the start, and then we grouped behind the line for the off. I didn't really have a plan - "run a bit and see what happens" was as far ahead as I'd thought. BANG! We were off...

Precisely as the gun sounded it began to rain, just very fine rain (for now). I cleared the first kilometre in around 4:45, which is roughly PB pace for me (though you can't think about such things when you're only at 5% distance). The second km went by in 4:30 which is a little over-enthusiastic! I backed off, and trundled around the rest of the first third of the course at around 4:45-4:55/km.

The course description was "flat and fast" - to be honest, I've raced flatter... There were many more gentle (and occasionally not so gentle) climbs than I was expecting. This being day 19 of my Juneathon (run every day in June) attempt my legs weren't really up for PB-pace up hills...

Not that flat, and look at the pace drop-off! (green line)

The middle third of the race was hard work, but by the final third I was pretty gone. The rain had gradually increased in intensity until in the last 5km I could only describe it as "settled in for the duration". Everyone was drenched. 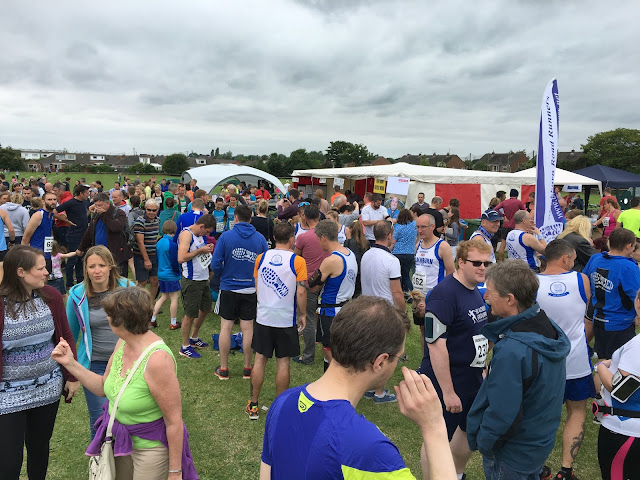 Before the race again - the clouds got much, much, darker

I'd picked up a friction burn on the inside of my arm and my heel was a bit worn, plus my shorts were glued to my legs - things get a bit weird when you're running, soaked to the skin. My pace rolled off and I finally got to the end.

I finished with an official time of 1:47:42 which feels quite disappointing to me, but is only 7 minutes slower than my PB time (from the Royal Parks Half back in 2012) and I think is still my third fastest ever half marathon. Mrs came in at 1:57:36, only 20 seconds slower than her personal best which was an incredible performance given the conditions! 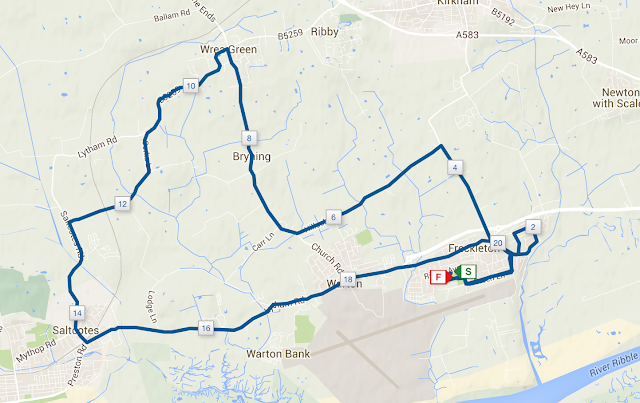 We went to hide in the car and get changed - thankfully I'd brought a spare t-shirt and socks/shoes - but had to drive back in sodden shorts. Squishy. I enjoyed the run, despite the last few km of trudging, and I'm looking forward to our next holiday race - the Morecambe Half next weekend, where I'll ensure my night-before indulgence is a little more restrained, and hopefully the weather will be a little more forgiving.