Two weeks into the high fat/low carbohydrate experiment, and I have to say on the whole I've felt pretty good. 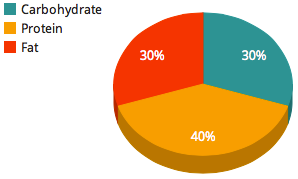 Although I had a target previously it was more of a pointer than anything I actively ate to. I knew it was there, but I didn't consult my progress during the day and think "Hmm, I should have some more protein" or anything like that. 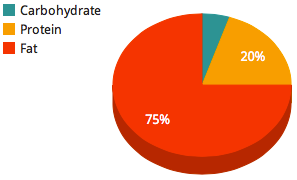 I'm pretty much spot-on this now. Comparing my mix from before I started this experiment until now it's actually the most stable nutrient mix I've ever had by a considerable margin.

At the start of the week I had a couple of days where I really couldn't get out of bed, but once I'd got up I found I had plenty of energy. On a few occasions I get light headed when I get up quickly, but that's a well recorded effect during adaptation.

Exercise continues to be no problem. There's an odd feeling when I first start, when cycling legs feel "fizzy" for a few moments, a bit like they're totally empty of fuel and are about to stop working (ever cycle sprinted up a steep hill? or hit the wall/bonked?). However after a few moments they're fine again. No real loss of power evident from the commuting I've done, but hard to tell without going for a longer ride. I'm planning on putting in a 90-120 minute ride tomorrow while Mrs is running a half marathon in Richmond Park.

I did have a very fast and hard energy crash on Sunday afternoon. It came on so quickly I found myself falling asleep waiting for web pages to load! I soon came out of it though after a short walk. I expect there's going to be a couple of events like this as although I'm clearly burning fat now, I expect there is considerable optimisation required to become really efficient.

At work I've felt good and alert, the occasional feelings of hunger but they go very quickly. Dropping to a lunch and just a couple of snacks during work hours is handy - less to carry than on my carb heavy days where I was almost permanently snacking! In particularly I don't have an afternoon slump any more. That was quite crushing at times and probably led to the growing habit of a 4pm chocolate bar (not the right solution, only encourages the yo-yoing of insulin levels). 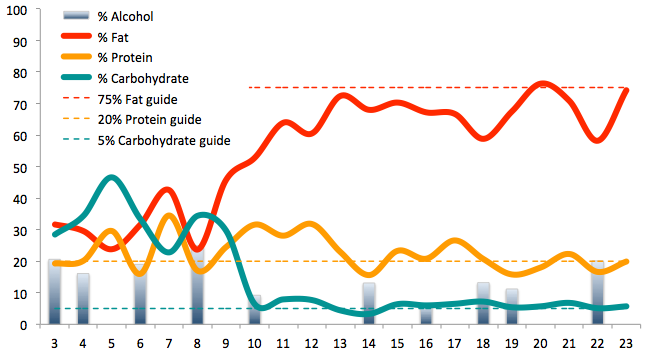 I made a mess of Thursday evening - we went out and I poorly judged my wine intake. Got to 52g carbs for the day which is still considered low, however I was very hungry the next morning. I really didn't enjoy the carby craving, but it wore off towards the afternoon thankfully. I hadn't been hungry like that for a few weeks - it's a bit like having a hangover when you haven't had one for a long time. Unpleasant.

Absolute carbohydrate intake - can you guess when I started low-carb? :)

Apart from last Thursday I've kept under 50g/day every day. In the literature this is considered a "very low carbohydrate diet" and should be within the range to properly adapt to a fat-burning metabolism.

One thing that's definitely helped me, and you should certainly get into this habit too if you're interested in trying this, is that I am used to meticulously logging every single thing I eat and drink. Even the cup of tea I'm drinking now (1.7g carbohydrate) makes a big difference when your targets are so low. I've used Weight Loss Resources for a long time, and highly recommend it - regardless of if you're losing weight or not.

In studies that have been done the vast majority of people mis-report, under-report, or flat out lie about what they're eating when asked to keep a diary. Buy some scales, weigh everything, and keep yourself honest - it's definitely worth it.
Posted by Norm at 11:52 No comments: