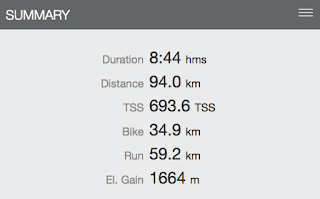 June started on the 1st, like it does most years. I like June 1st because it's my birthday. This year it's a Wednesday which is a fairly dull day for a birthday, so I thought I'd go to work. I cycled in, and ran some of the way home. 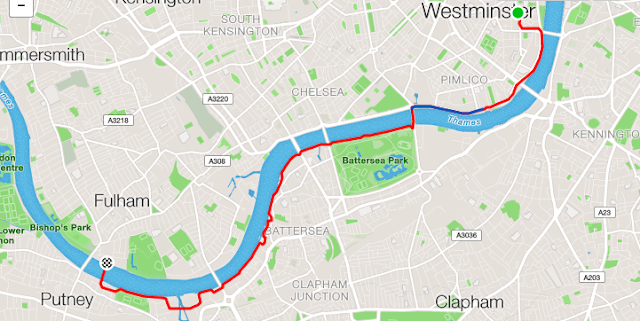 ...and run back to Putney

I often run to Putney and get the tube form there, at a little under 10km it's a nice distance to turn your legs over without it being a something that needs planning or takes too long.

A lot like yesterday, but the other way round - a short run in to work from Clapham Junction and a cycle home.

Run to work from Clapham...

I've only got back on my bike recently after not riding it since autumn last year. I tend to go in phases with cycling. I certainly feel it's overdue another phase.

Mrs is taking me to Dublin for a birthday weekend so I elected to work from home today. I woke up early and couldn't get back to sleep so decided to get up and run round to "Uncle David's House" to drop off our house keys.

"Uncle David" is David Fellingham, proprietor of West Wimbledon Cattery, our current preferred kitty hotel for when we're away from home. We discovered last year that he also does home feeding visits, which is really useful for weekends like this when we just need someone to take care of Saturday and Sunday.

I also picked my old Fuji bike up from a fantastic service at Sigma Sport in Hampton Wick - these guys are excellent and my bike is better than I'd expected a five-year old bike that's been out in all weathers could be. Might be time to take on the old "three hills" route again, haven't done that for a while.

With last night's birthday weekend celebrations ending up with a few rounds of Irish-strength cocktails at gone midnight, getting up for parkrun was going to be hard. We changed our plans from a trip to Naas to "just get to the nearest one" which turned out to be St. Anne's parkrun.

This is a beautifully manicured park to the North of Dublin. We arrived to find very little evidence of parkrun - obviously we hadn't forgotten that Irish parkruns start at 9:30 *cough*. But with 45 minutes to kill we ambled around the park, before the usual colourful collection of parkrunners began to assemble at 9:20. 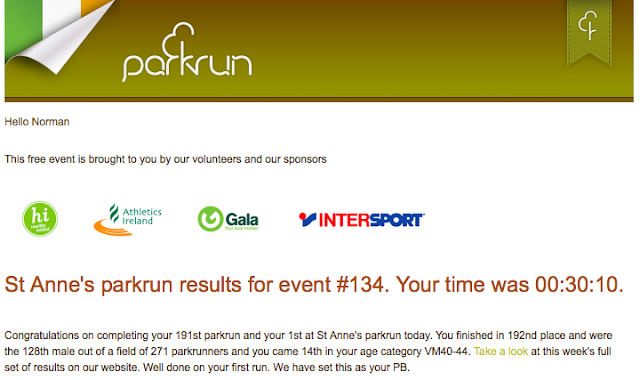 Every new event is a #NewPB

We got a little mention in the run report: "We also welcomed our parkrun tourists today - Norman & Kate Driskell all the way from Wimbledon Common parkrun. We hope you both enjoyed your visit & our parkrun route" (we did, it was lovely thank you Gillian) and they insisted on taking a photo for their Facebook page. 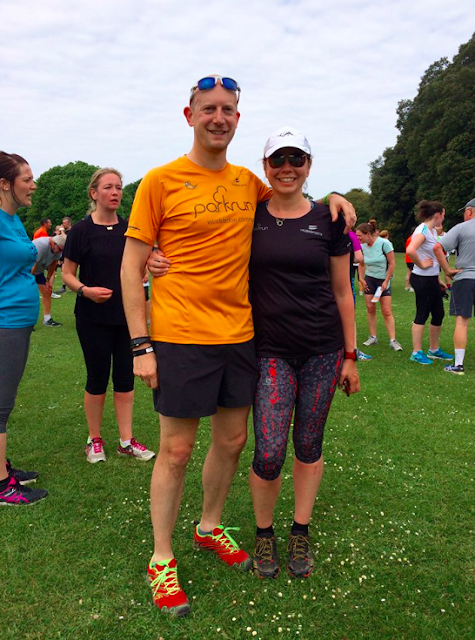 After a cup of tea and some reviving breakfast at the visitors' centre, we hopped back in the hire car and set off for Glendalough. There was a lot of traffic. The weather has been glorious in Ireland for the past week, and the hot sunny weekend had brought everyone out and into the hills.

As we got there the queue for the car park went right up the hill, a local Garda was turning people around and sending them to alternative car parks - which turned out to be an enterprising farmer's field, and a kid on the road charging €4.

The main routes at Glendalough are marked by coloured arrows. We decided to take the red route - the longest and with the most altitude gain. Mrs is in training for NDW100 and I'm training for the Chiltern Challenge Ultra, so it was a good specific session for both of us. 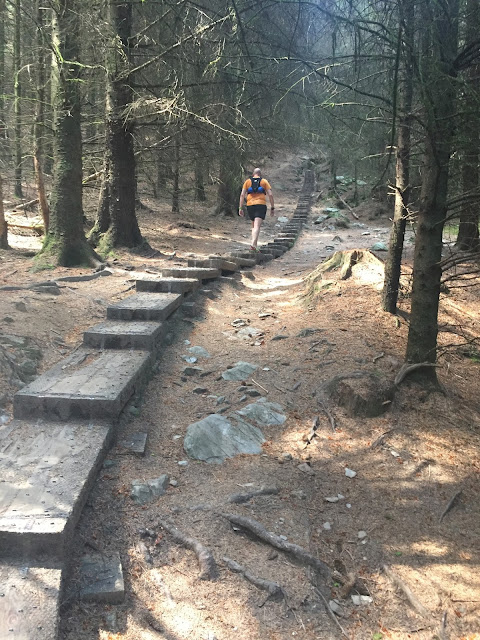 Board walk; exactly what it says on the tin

Most of the first half was hiked, steep inclines, up to a long section of "board walk" - a path made from old sleepers and with chicken wire and fencing staples to improve grip. It went up, and up. After that it went up, and then up a little more.

Up, up, up, and wheeeeeeeeeeee down again...


Eventually, we got to the top, were greeted with a fantastic view, and then a glorious 5km run down a well finished gravel roadway - talk about a run of two halves!

Panorama from the top

We had elected to go back to Glendalough today, but earlier to beat the crowds. We got there before 10am and it was still fairly quiet. Our legs were toast from yesterday, so we chose the orange route (similar area to yesterday, but no where near as high), and then the purple route which is an out and back round one side of the lake.

Not quite the altitude of yesterday, but still a good hike up

The hillier orange route went well, but I found the flatness of the purple route hard. We both dug in and got round though. On the way back to Dublin we met up with an old work colleague of mine for a coffee at a wonderful cafe called The Grange Kitchen - highly recommended should you ever get the chance. 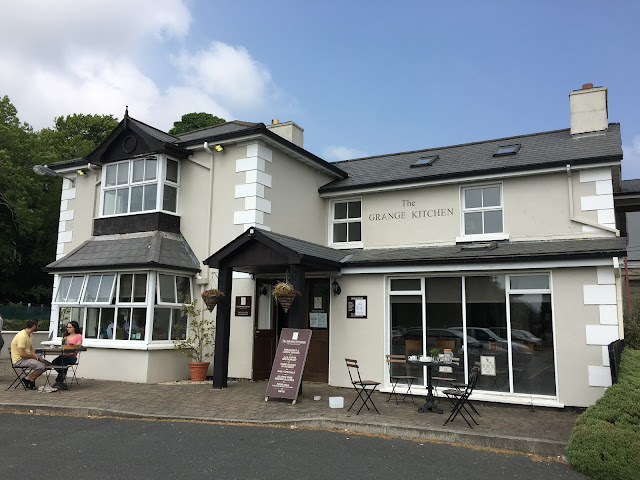 After this heavy and hilly weekend I'm not entirely sure how I'm going to tick off my 5km tomorrow - I predict very, very, gently...
Posted by Norm at 09:19

Email ThisBlogThis!Share to TwitterShare to FacebookShare to Pinterest
Labels: Juneathon