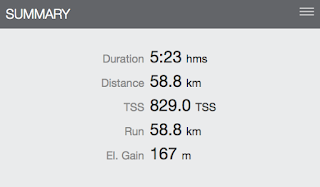 Monday saw the traditional lack of inspiration, alongside a fairly knackered pair of legs form yesterday - so it was the local loop again. I briefly toyed with running it the other way round, but then forgot until I was half way round, so...

It's that loop again!

One of my regular partial run commutes, from work down the Thames Path to Putney Bridge tube station. A well known and enjoyable route - particularly in the summer when there are so many other people out walking, cycling, and running. 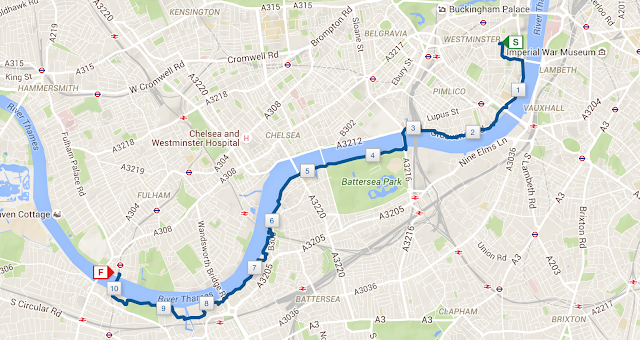 From Westminster to Putney Bridge

Another one of my regular runs, this is the one I do when I've got up too late or procrastinated heavily, and don't think I have time to run all the way to work or even from Putney Bridge. I can get the fast train to Clapham Junction (around 10 minutes) and run from there to work.

The opportunist run - if I don't take the opportunity, there is no run

Back to a tactical local loop, far too busy being stressed about getting a significant amount of work done plus packing all in time for heading off on holiday after work tomorrow evening!

I'll give it a five-point-oh. Kilometres.


I've been listening to audiobooks quite a lot whilst running recently. I'm about half way through the fourth book in Orson Scott Card's "Ender" series, Ender in Exile. It's a lovely way to lose yourself in a different universe whilst running along - not so good when you need to focus on intervals or hills, but great when you're just ticking over in a zone 1 run.

We decided to have a pre-holiday night away in Stratford-upon-Avon. A beautiful town that I'd never visited before. We didn't arrive until gone 9pm and I hadn't been for a run yet, so I quickly got changed and set off for a random stumble. Thanks to summer no head torch required.

I immediately got lost and didn't go where I was intending, but managed to find a loop that went out on a road from the town, and then cut back to the river Avon. Making my way back to the hotel, and trying not to fill up too much on midges ahead of dinner, I found I had almost 1.5km still to go to make up my self-ascribed minimum of 5km per day. A couple of laps of the estate the hotel was on and the job was done. 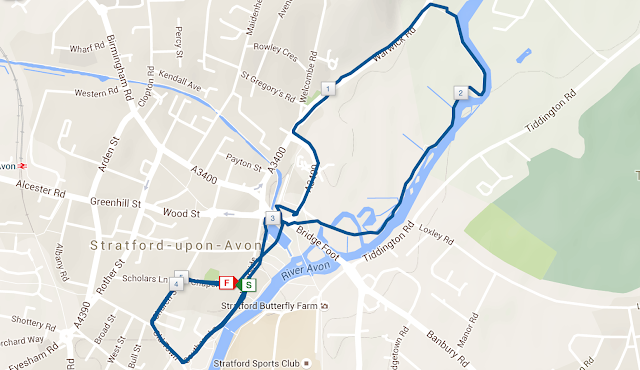 A bit of a random run in Stratford-upon-Avon

I managed to get into the restaurant just in time for dinner. I'm not sure they appreciated me dripping in sweat, but it's not my fault it was 99% humidity - and you know what they say, "the customer is always right*".

*even when he's dripping into the soup

There was a thread on the parkrun tourists Facebook group recently about the closest you've ever woken up to the start of the day's parkrun - I think today was my second closest ever.  As the crow flies I think I was about 0.2 miles, the only time I've been closer was Glossop inaugural last year when we stayed in a room in a pub that was on the corner of the park! 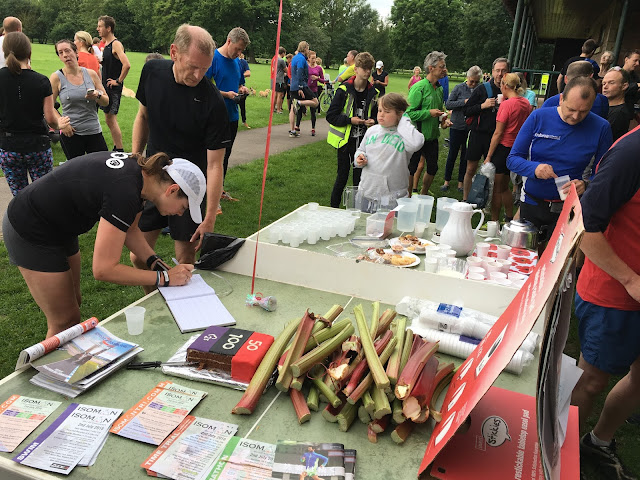 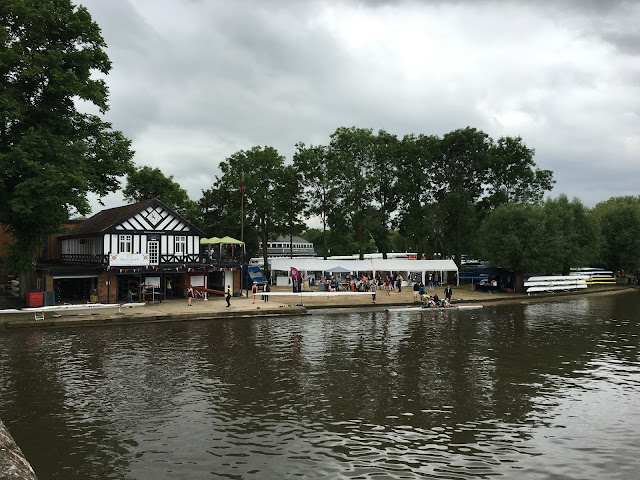 It just happened to be Stratford-upon-Avon regatta today. Thankfully the parkrun was still on, but with an alternative course. Three and three-quarter laps of the field, incorporating a nice path down the side of the river where we could watch the racing.

We jogged round in over 30 minutes, damply (so humid here!) and managed to avoid filling up on cake. It was a wonderfully friendly parkrun, and I'd recommend it to all tourists. 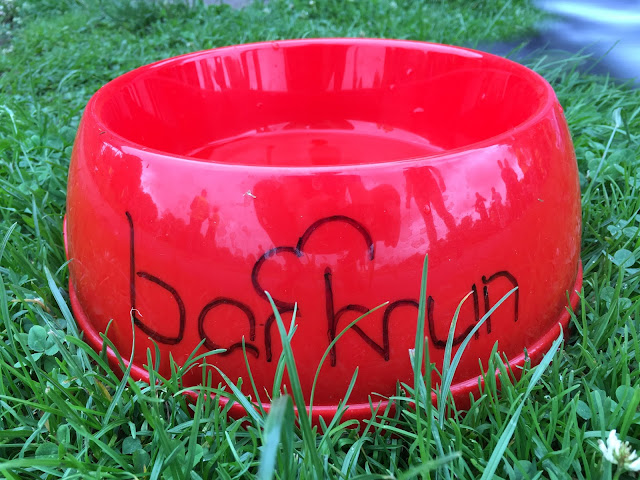 Dogs are welcome too

I was delighted to hear in the race briefing that the regatta organisers had offered a free bacon roll to every parkrunner on the production of their barcode - what a lovely example of two different sporting events sharing the park and doing so nicely! More of that kind of thing please.

Today was the Freckleton Half Marathon, a race I entered a few weeks ago. It was wet. My race report is here. In short - torrential rain, a fair amount of hurt, a relatively fast time, and a definite need for a beer afterwards!

So that's 19 days back to back - roughly two thirds of the way, but with two weeks in the Lake District plus another half marathon, plus some supreme hills - it's great training for the Chiltern Challenge, but I'm so looking forward to a rest day on July 1st!
Posted by Norm at 10:00