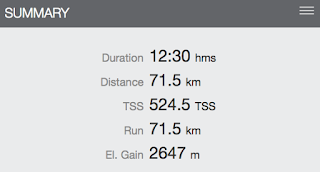 After yesterday's Freckleton Half Marathon, my poor legs were fried. The aim of today was as little as possible, as slow as possible! Therefore it was a gentle 2.5km trot down the road, and an equally gentle 2.5km back. 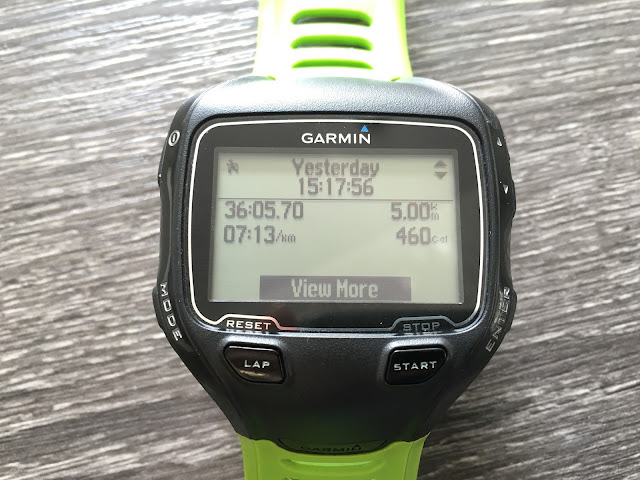 First km was very creaky in the legs, the second a little less so, but slow was the name of the game

On the plus side we found a nice bar attached to Ambleside Youth Hostel, so we went there for a post-run beer or two and lapped up the late afternoon sun. On the down side, although the run is on my watch, it doesn't seem to want to sync it to Garmin Connect. Does that mean it didn't really happen? 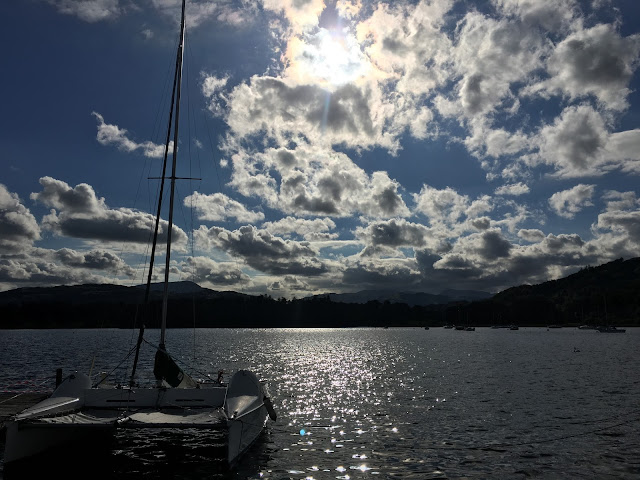 Not a bad view whilst enjoying a pint

Legs feeling surprisingly recovered, so up into the hills it was. Heading out of Ambleside then a small loop taking in the Loughrigg trig point, then back into Ambleside for a cuppa. Nothing too big, but a reasonable ascent and plenty of good views.

The Big Dipper - as depicted by a GPS trace 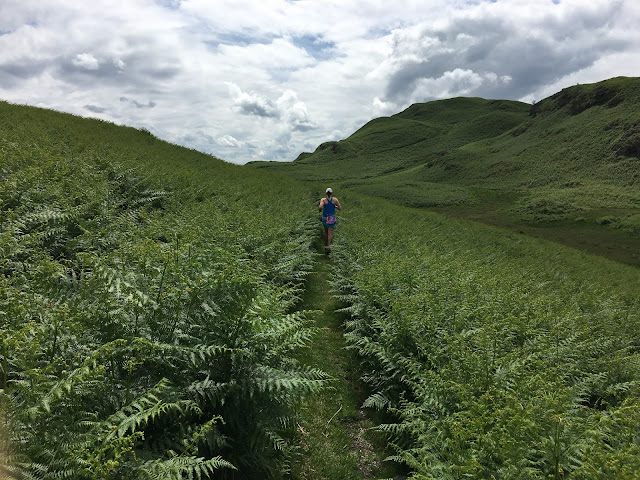 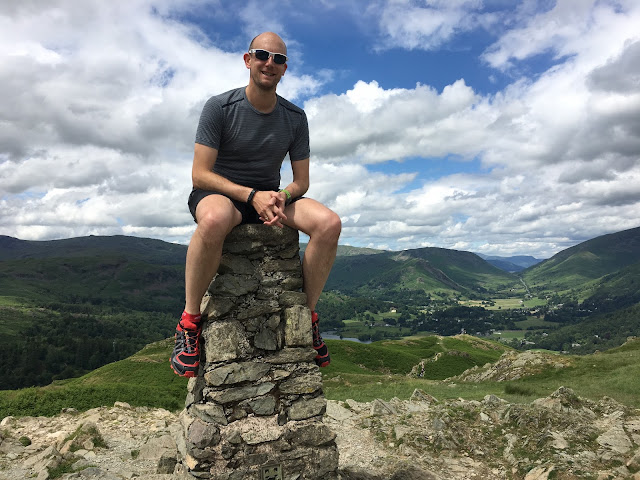 Me on a trig point

Dramatic panorama with a person in it that I didn't notice at the time...

Today was the biggie - because I'm lazy I'm simply following most of Mrs' training plan for this couple of weeks. She's training for the North Downs Way 100-mile race (I need a sit down just thinking about that) and this holiday for her is about consistency (running almost every day) rather than extreme distance or climbing. That works well with my run-every-day Juneathon ambition.

That being said, today called for a fairly tough 16 mile run from Ambleside to Coniston - a journey of fewer than 8 miles if you drive direct, but for us it's a 16 mile run/hike with almost 1,000m of climbing. 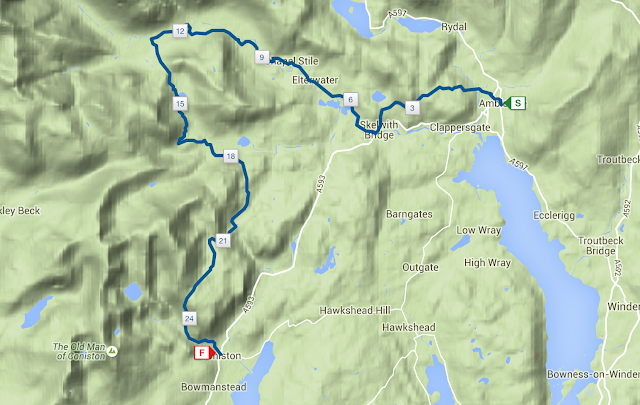 Not the short route, but most certainly the pretty route

We decided to run separately today, so Mrs left the house 15 minutes before me. I wasn't running fast to catch her, but was interested to see if I would, or what the time difference would be when we met up later.

The route was glorious, starting out on the same path as yesterday but then diving out into the countryside away from any towns. The OS Map Finder app kept me on path - apart form one section where I ended up on the wrong side of a river for a while. Easily fixed with a squelchy trudge across some heathland and a few displaced sheep. 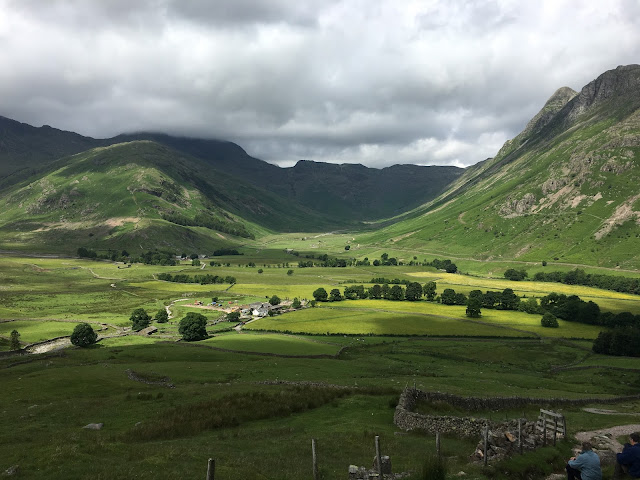 The route down into Coniston was familiar, although I hadn't run this exact path last year I could certainly see all the familiar paths across the valley.

Running down towards the Black Bull pub I was pleased to see I'd beaten by over ten minutes the four and a half hour time I'd had in mind that would represent a reasonable performance. 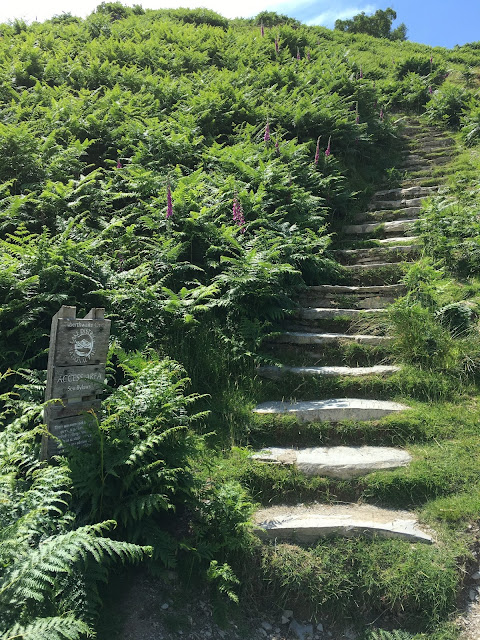 Mrs was already at the pub, and had been there for... precisely fifteen minutes! We'd both taken 4:18 although had clearly gone a bit wonky in different places, and had our fast bits and trudge bits at different times. A good day out for both of us, and excellent training in the hills for our upcoming events.

Up, up, up from Ambleside then a long rocky down into Coniston

We settled back to wait for the bus back to Ambleside and enjoyed a celebratory reward pint of local ale and a slap up brunch at the cafe.

I didn't think my legs would even work today - and to start with they didn't. Today's "run" started with 2km straight up from behind our holiday cottage. 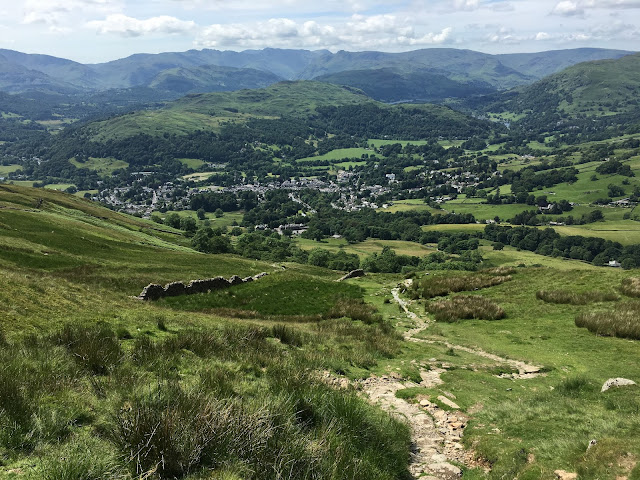 3/4 of the way up, and Ambleside looks pretty as a picture in the early afternoon sun

450 vertical metres later, and the view was, once again, well worth it. You really are rewarded for your efforts around here. 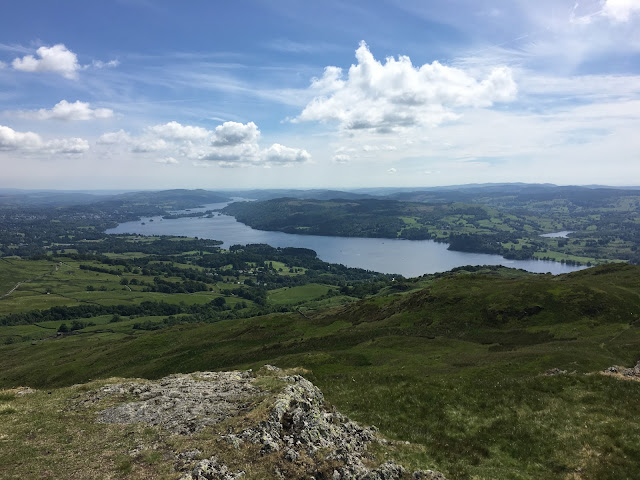 The view out across Windermere

Once again we had a beautiful sunny day, with no need for anything more than a t-shirt at the summit. 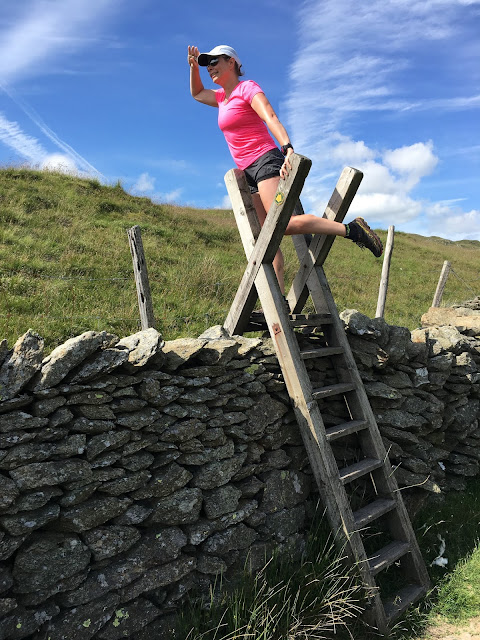 We completed a short circuit up at the top, following some clear, and some not so clear, trails - but we did find a ladder over a stone wall. 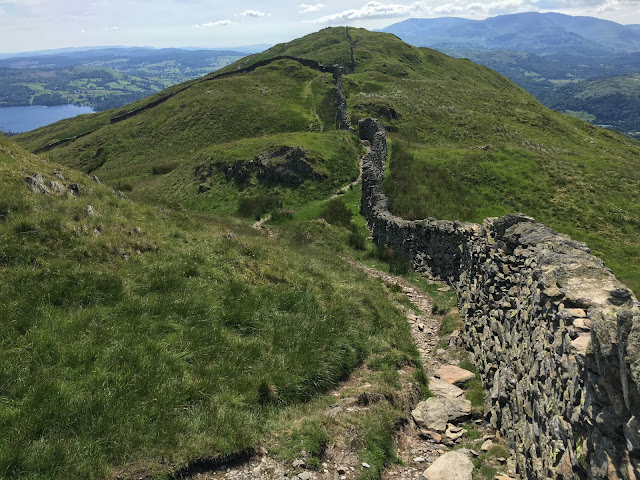 Undulating wall along the ridge line

We took a jog around on the top of the series of hills, and then killed our quads "running" down the descent back to Ambleside, and a nice quiet pub with a sun-trap beer garden. 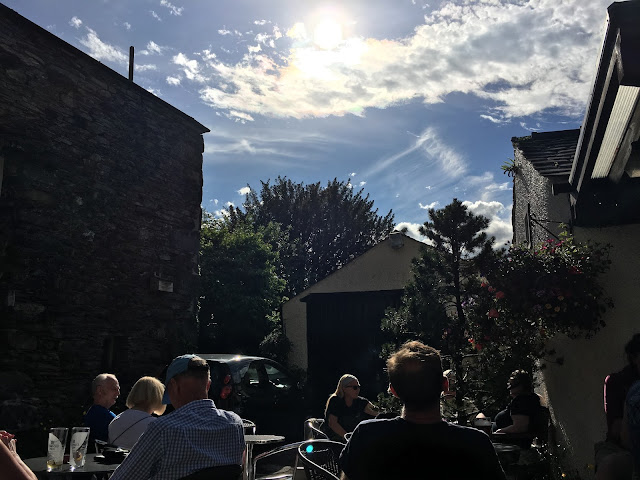 I highly recommend the Golden Rule - it's the friendliest and least touristy pub we've found - we will be back!

Up, a ramble around on the top, and down again

Today I decided to depart from Mrs' punishing week of hills, and instead jog a couple of laps around some nice flat predictable concrete. I think my legs probably could have got me up a hill or two, but with parkrun tomorrow and then the second of the holiday's half marathons on Sunday I don't think it's worth the risk of an injury from overdoing it. 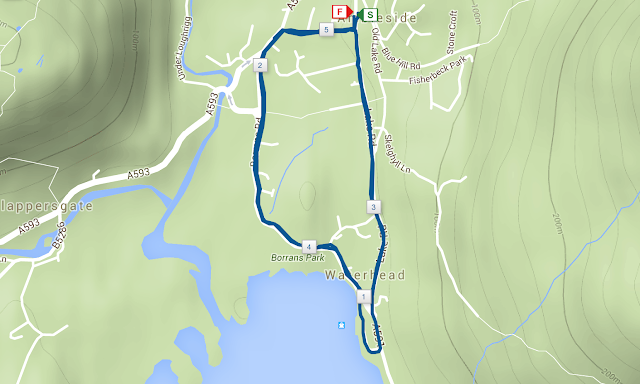 Also, I'm absolutely knackered and can't be bothered with anything more than this today!

parkrunday! We drove over to Newcastle to visit friends on Friday night, so that meant a rare North East region parkrun. With so many to choose from, we opted to just go with the nearest (and get back for home-cooked breakfast, yum) so we trundled the 15 minutes to Gateshead parkrun.

After getting dizzy running in circles round the boating lake, and after complaining bitterly to no-one in particular about my legs which appear to be made of lead, today's run was done. Breakfast time!

As the 8am "time to get up and drive an hour to a half-marathon in Morecambe" alarm rang, we got an attack of the sod-its, turned the alarm off, and stayed in bed.

Mrs was talking about a spontaneous rest day, but I was due my daily 5km minimum so plotted a short route up a road, a sharp climb, and then a lovely long descent down a ridge I'd seen earlier in the week. 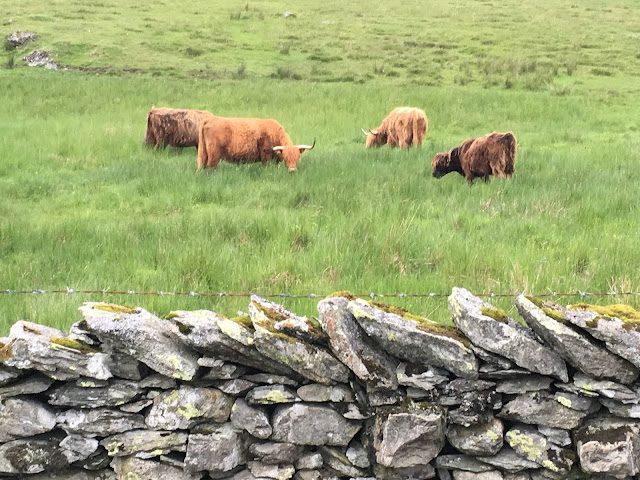 I decided to wait until early afternoon, just as it started raining, to leave for the run - and Mrs decided to come too. 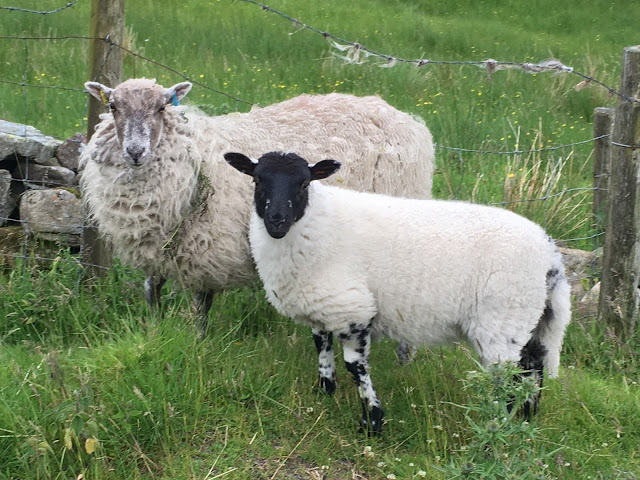 The first half was up a steep road out of the North of Ambleside up a hill ominously named "The Struggle" - after a week of going up and down hills it wasn't so much a struggle, but it was damn steep - and went up, and up, and up... After a few very slow kilometres we took a left onto a trail and off the road. 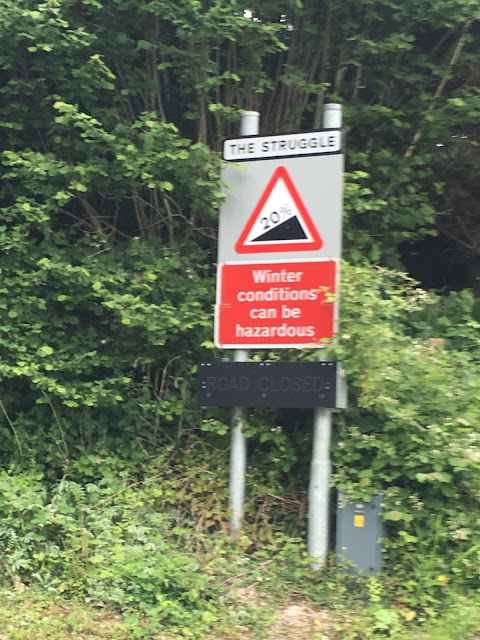 By now it was raining properly. I was grateful for my lovely light waterproof shell layer - a memento from being up here on holiday last year. 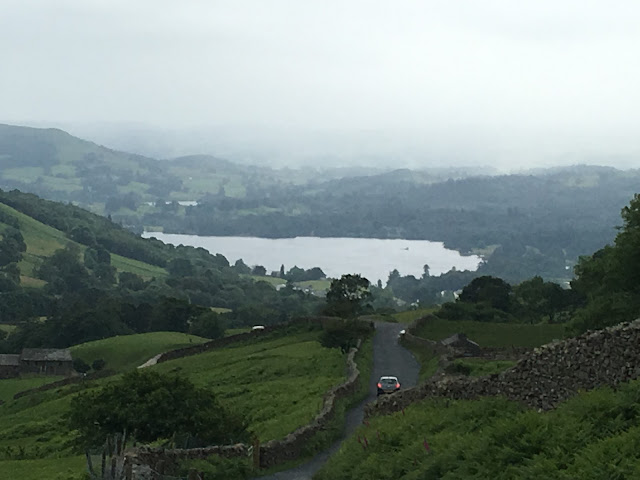 Not so sunny across Ambleside today 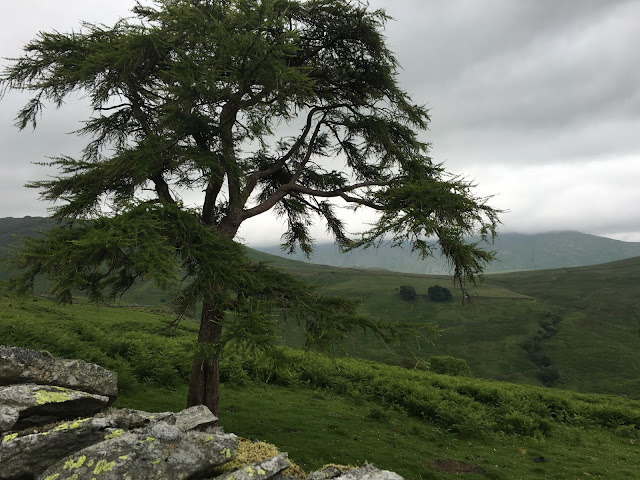 Countryside takes on a different kind of beauty in this weather 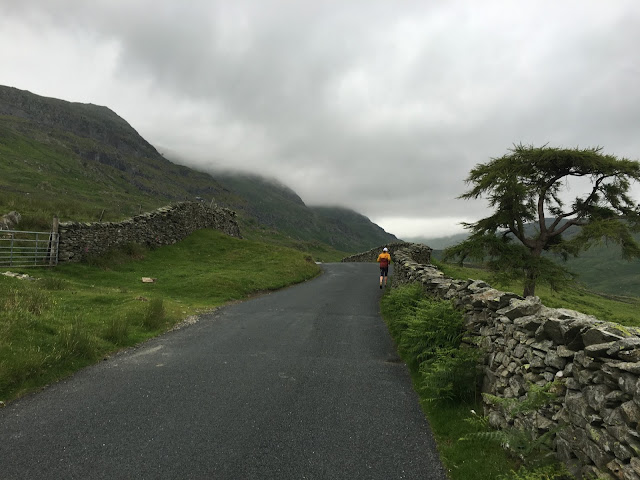 Mrs running up into the clouds above

There was a steep walk/climb to the peak (if you didn't get to the trig point it doesn't count, right?) - and by now we were well into the cloud, visibility was about 20 metres, and the wind was whipping up. 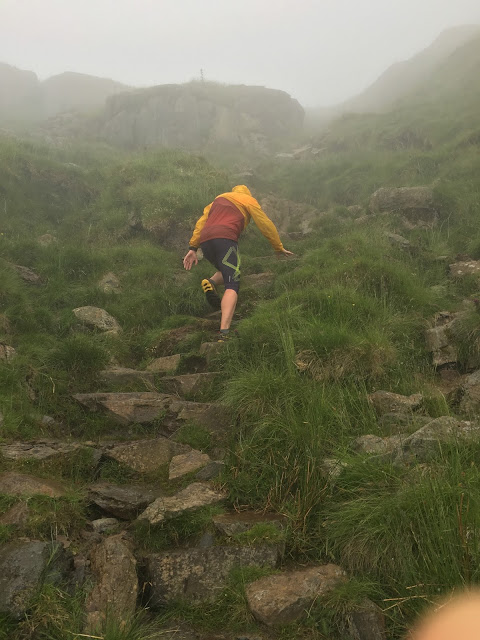 Steep, but not in the wind and clouds yet 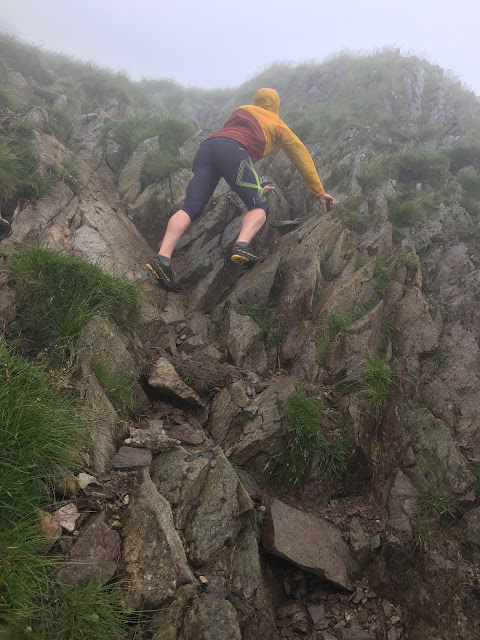 Thankfully, the top was near, and after a quick shelter to get our breath back and a selfie on the trig point, it was time for the long descent back to Ambleside. 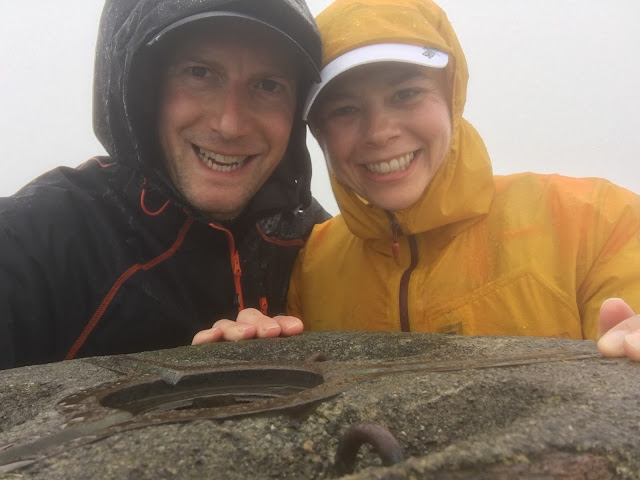 Another day, another trig point 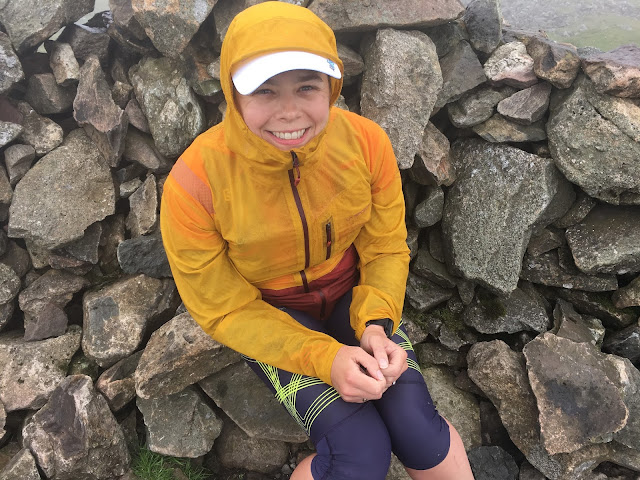 A moment of well-deserved shelter

I'd picked this route in order to enjoy the views whilst running down the ridge - the only view I got was the inside of a cloud as seen by squinting through the rain. 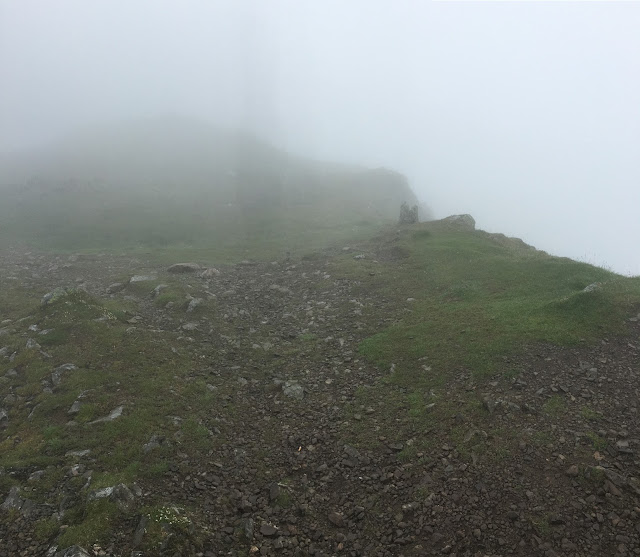 The view (I'm assured) is incredible from up here.... 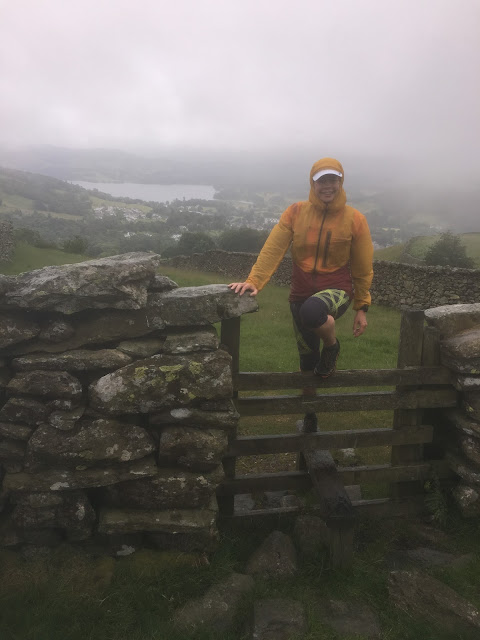 Back under the cloud, dampened clothing but not enthusiasm

So, a 7 mile run in the rain and wind with sod all visibility - now we can say we've had a holiday in the Lake District! 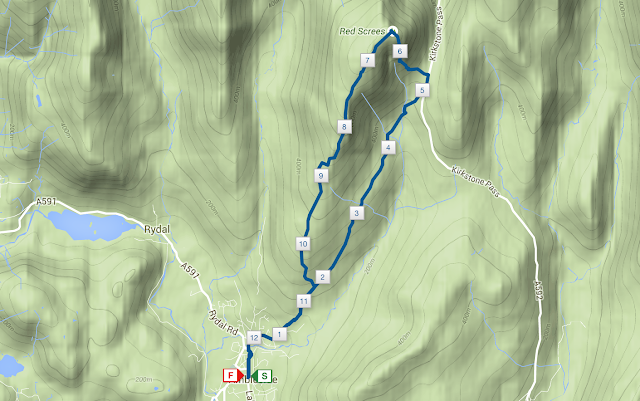 Check out the contour lines at kilometre 6!
Posted by Norm at 13:28