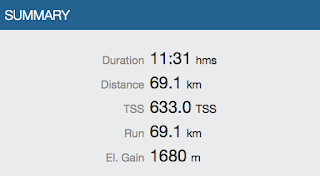 Today I decided that as Mrs had a rest day and we didn't run our fast half marathon yesterday, I'd get a few minutes of faster running in the bank. A small local loop of roughly 2km with the plan of four laps - warm up, faster, faster still, then cool down. 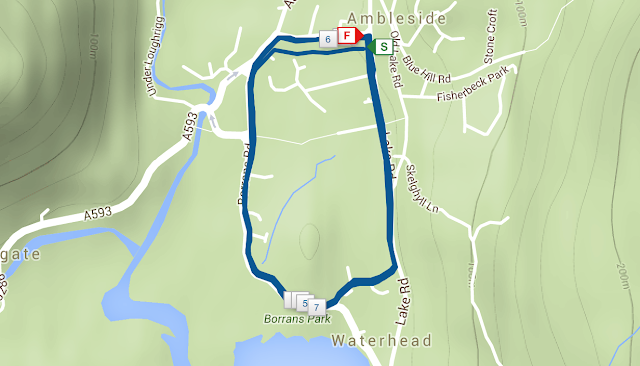 Today was going to be a harder day - another one of those "up, up, up, and down again" days, but this time even steeper, and with the weather due to close in early on. 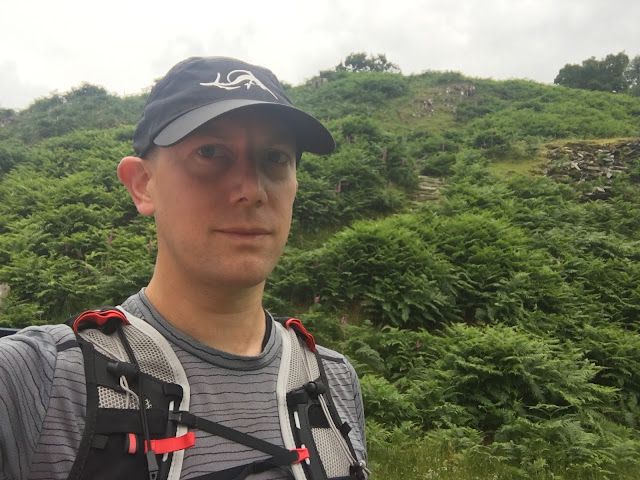 I drove up to Tilberthwaite car park for the start. All good trail runs have stairs and I'm not afraid of using the same ones multiple times. 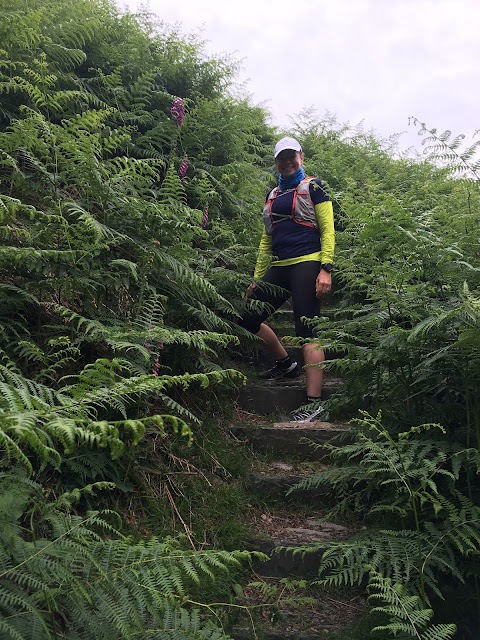 Today's route was a circuit, up from the Tilberthwaite car park, and round a loop that included the tightest contour lines of any of our runs yet. 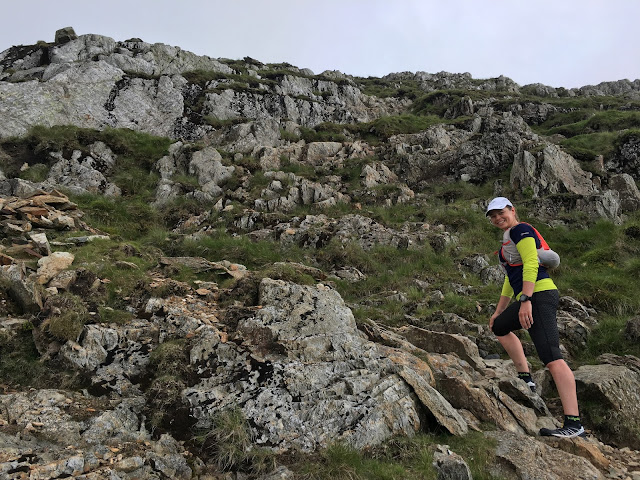 This wasn't the steep bit 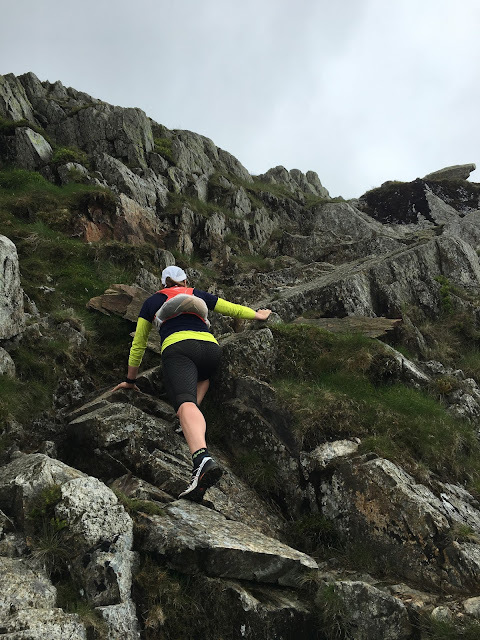 Now it's getting steep... 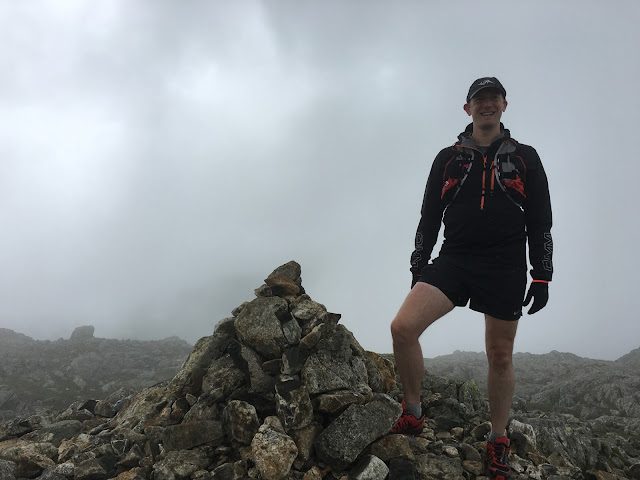 Head in the clouds (and rain) 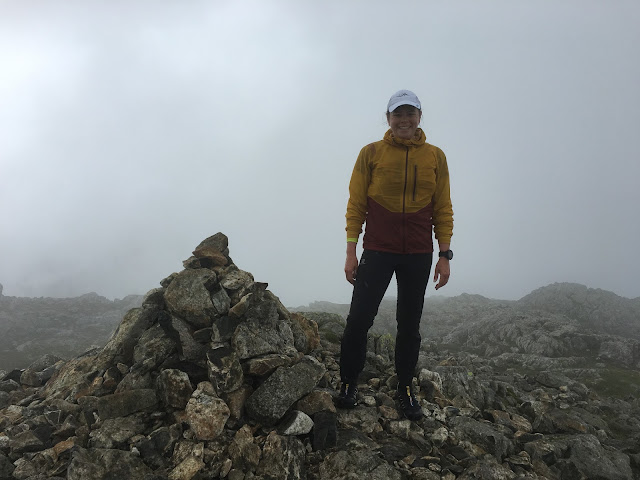 On the way down the rain came in much harder, so I kept my phone safely inside a little plastic bag. Safe to say - it rained. A lot. We exchanged some mutual back-slappery for remembering to bring a complete change of clothes in the back of the car, and then drove home in order to go to the pub and drink beer and eat cheese. 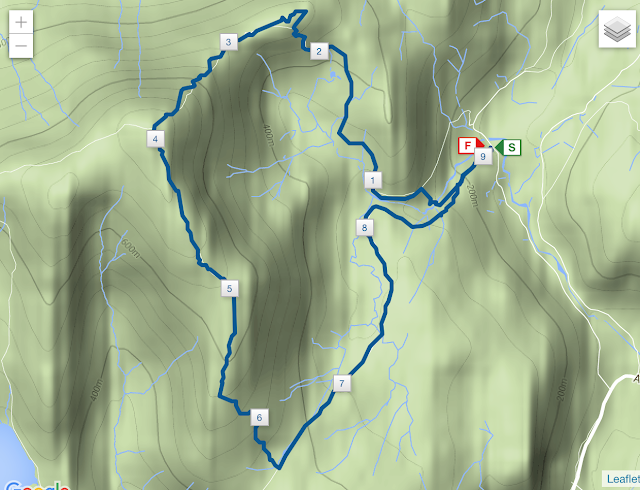 Holidays are fun! Two Juneathon days left; two much longer days, but not quite so hilly I hope.

I've been looking forward to running round Lake Windermere and felt it was a good way to finish off the month of running of Juneathon. However, the shortest circuit is 32 miles, and so it felt like a two-day job. Today was day one. 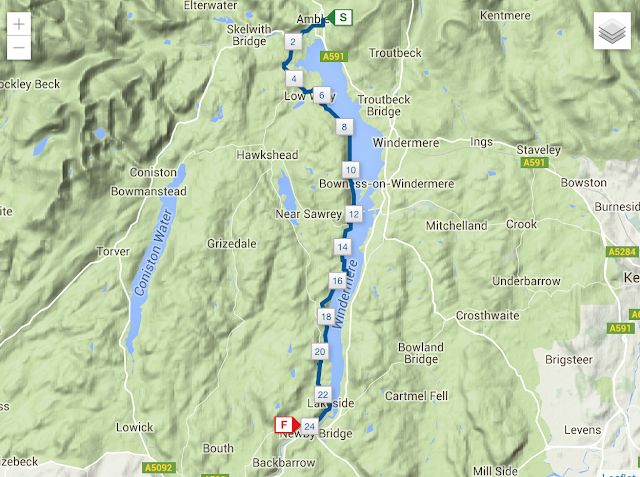 West side today, East side tomorrow

I ran from Ambleside down the West shore of the lake. There's a lot of private lake-front estates (and some tremendous houses) so it's not possible to run right by the lake all the way, however you can get a lot closer on this side than you can the other. Today's run was 25km and took 3:23, and all of it was in torrential rain. This wasn't a problem while I was running, but became a problem when I stopped and started getting cold. My waterproof shell layer isn't up to that level of defence, so I ended up soaked to the skin. 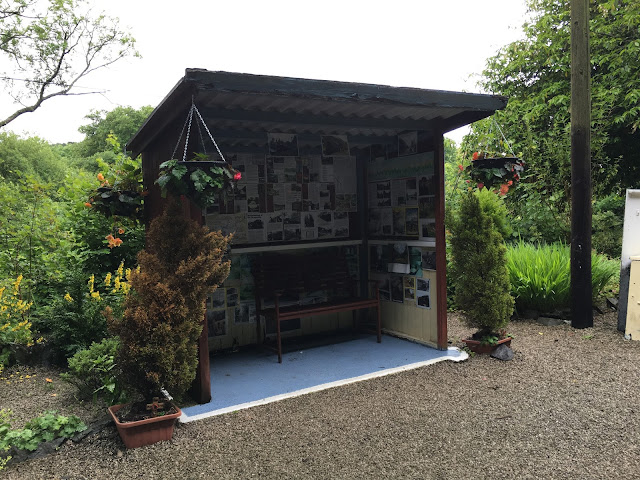 The "station" at Newby Bridge Halt

The route was fairly flat, and - apart from some overgrown pathways - it was good to do some longer periods of running again. I really enjoy the hiking and climbing and careful descending, but it's nice to run a bit. 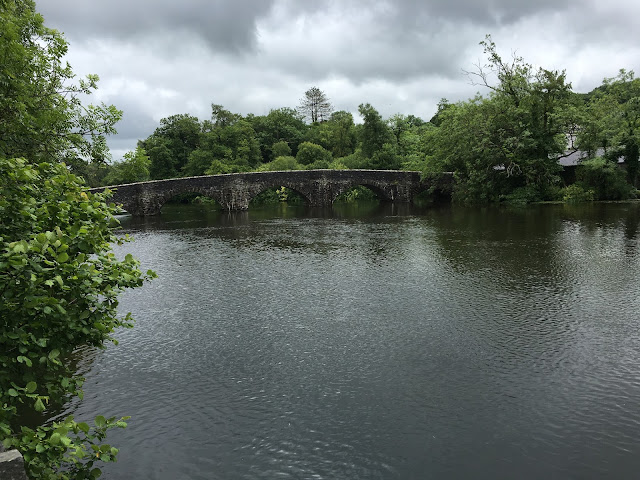 I arrived with 45 minutes to wait for the next train so ambled across to the pub for a well-earned pint, where I sat damply in a chair. 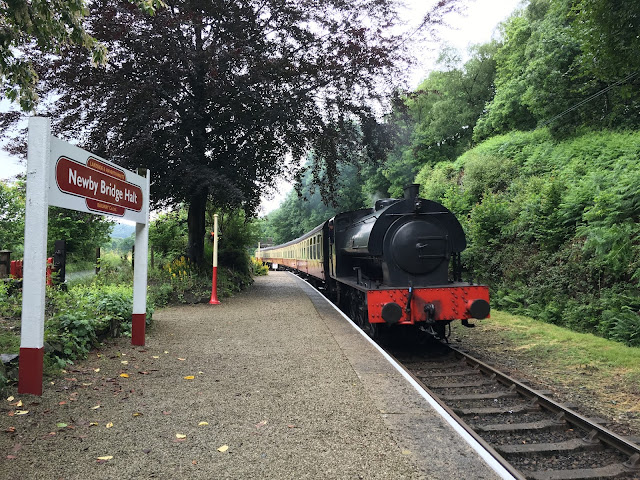 The train that spends its life going from Haverthwaite to Lakeside via Newby Bridge, and back

The highlight, of course, was the Lakeside & Haverthwaite Railway followed by the Windermere Lake Cruises ferry back to Ambleside. The train only has three stops, and spends its life chugging to and fro. I picked it up at the middle of its three stops, Newby Bridge Halt, right at the Southern tip of the lake. One stop up to Lakeland and you can take the ferry to Ambleside, via Bowness-in-Windermere. 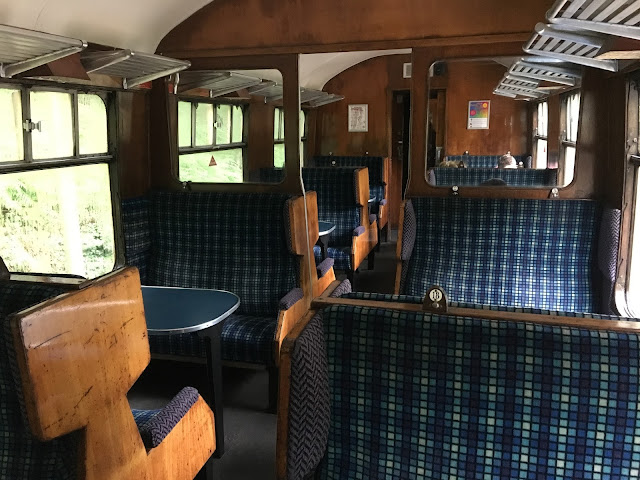 The train was a delight, chugging along slowly and tooting regularly. The interior was like trains I remember from my childhood - complete with leaning out of the window to open the doors. 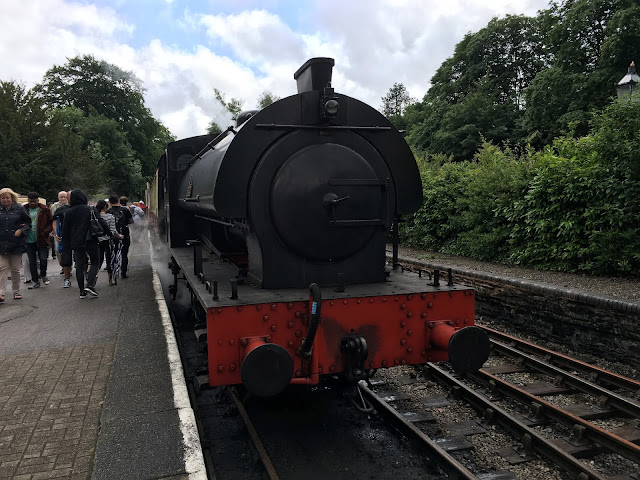 The rail and ferry timetables are well synchronised - just a 10 minute wait from train to Ferry. 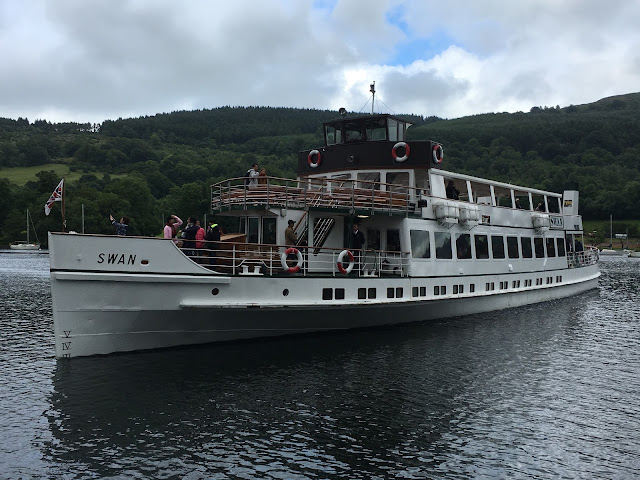 Tomorrow will be a harder day - longer and hillier. Hopefully the weather will behave and it'll be drier, too.

The last day of Juneathon 2016, and the longest yet. Today's run was down the West side of Windermere. It's much harder to stay by the shore line on this side. There are some beautiful lakeside properties with "grounds" and I assume they don't like sweaty visitors trampling all over them. 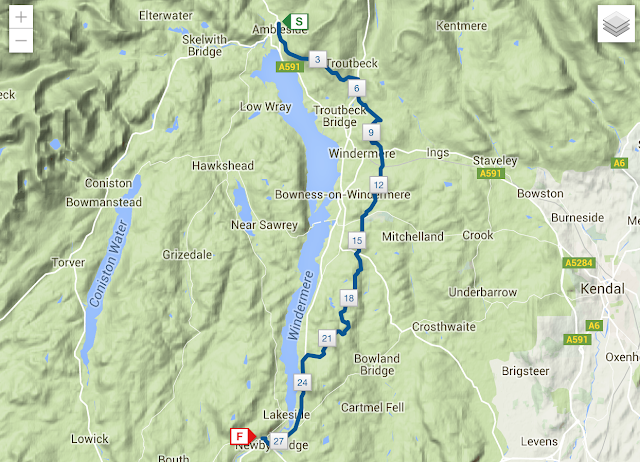 The weather was far kinder today, and rain held off. There were some great views of Windermere as I climbed up through Skelghyll Wood. 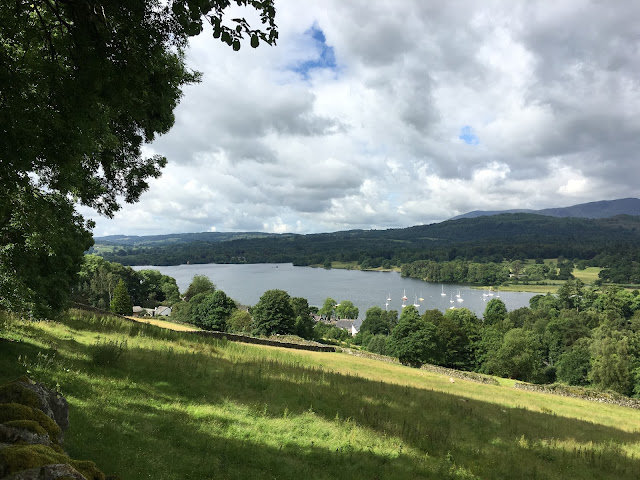 Windermere in the sun, as seen from Skelghyll Wood

There were a few paths that had visible damage from recent flooding. One river had a bridge on its side and a fast moving stream to navigate. I wouldn't recommend the route unless you're confident on your feet. 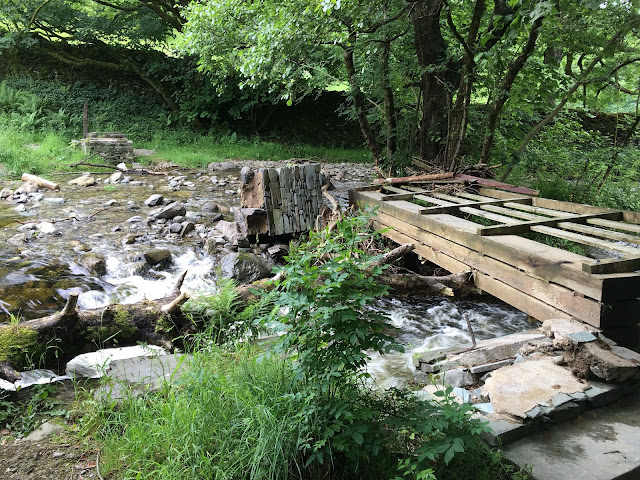 Bridge collapsed on this side, and no bridge at all on the other side 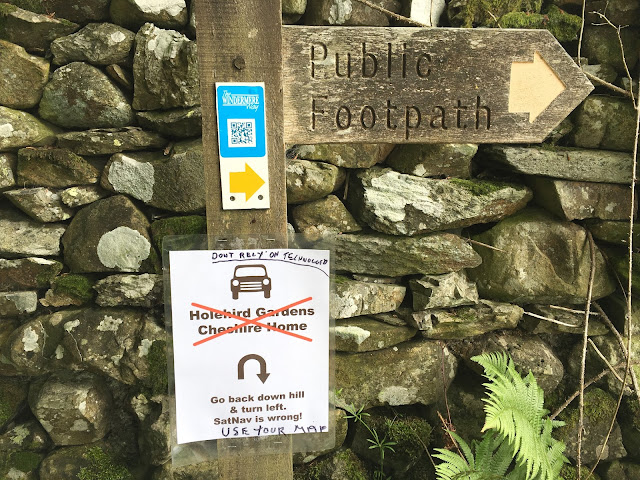 "Honey, yeah, there's another confused idiot in the driveway, we should really put a sign up" 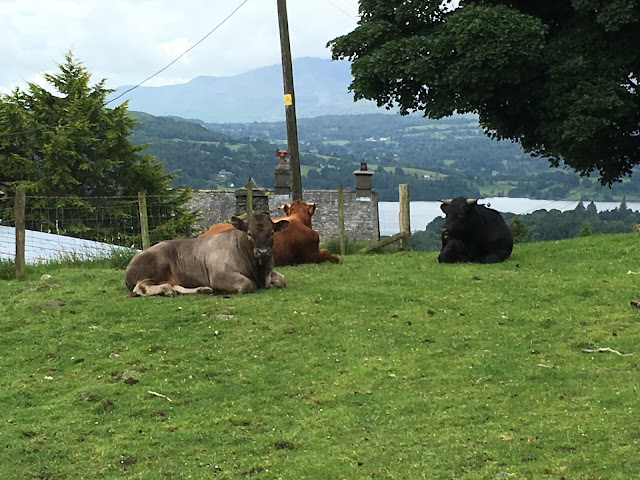 These cows were intimidatingly large - thankfully they stayed sat down 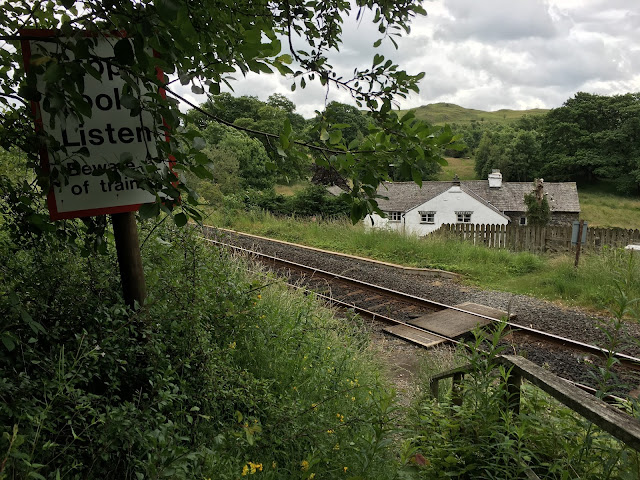 I can't remember the last time I crossed a railway line on foot like this - and despite looking very carefully left and right, and then again, and walking across carefully - there was a little part of me that expected a mainline train to suddenly arrive at 150mph. 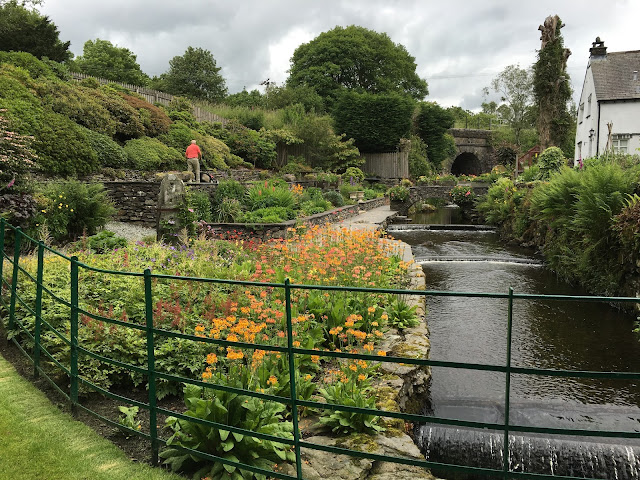 Beautiful garden - this picture does not do it justice

For those that make it safely across the railway line, there's a treat in store. This house on the other side has one of the most beautiful gardens I've ever seen. A stream runs through the middle, and the lawn and flower beds are immaculate. He was mowing his lawn as I passed by, we exchanged a cheery wave. 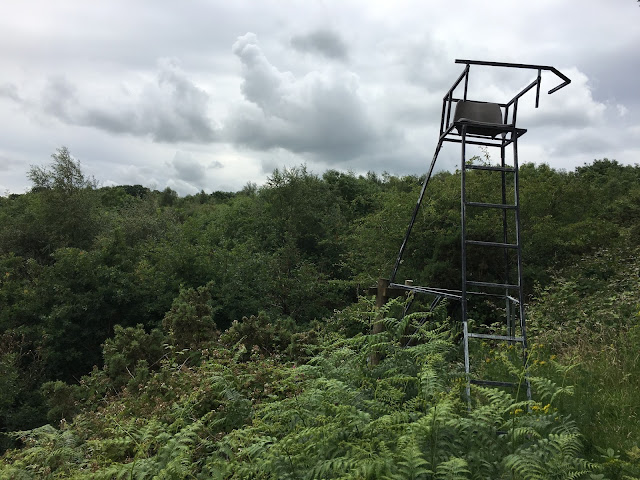 The pool boy hadn't been round in a while

Soon I was off the beaten track again, and climbing up into the hills. Some of the paths were somewhat lesser-trodden - nowhere was this more true than in Blake Holme Plantation - a thick and lush forested area. My main path was almost invisible, and at one point I reached a fork where, despite the insistence of my map, there seemed to be absolutely no path at all. 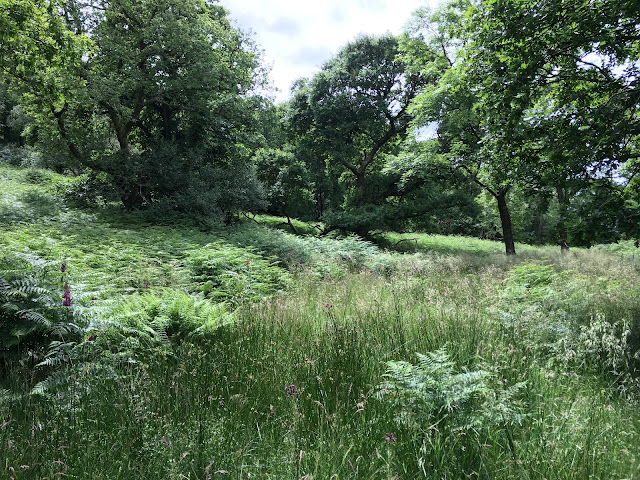 I waded through this for a few minutes before realising it was a terrible idea, and turning back

I decided to cut my losses and take a route down the side of the hill back to the road. There was no way I was going to make it through the forest on paths like this. Even getting back to the road was a challenge - the path here was a stream, slippery, muddy, and cold! 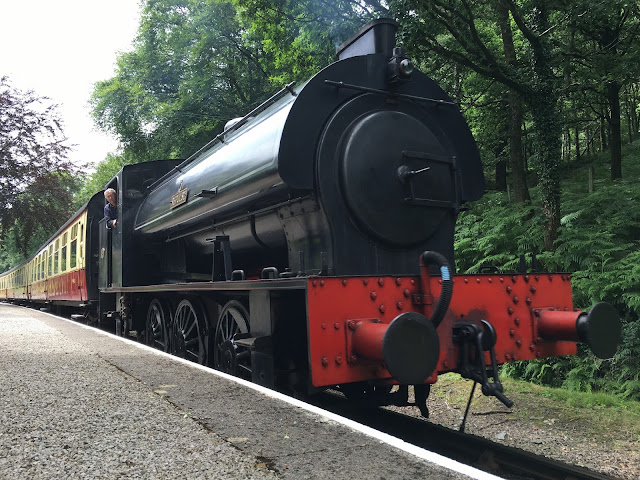 With only a few kilometres left, I chose to run round to Newby Bridge not he road - there was no point in diving back into he forest. With serendipitous timing, I arrived at Newby Brdge Halt precisely as the train tooted its arrival. One minute later and I'd have had over an hour's wait.

No one expected the ferry ticket inspector to be Noddy Holder

Back on the Ferry, and back to Ambleside. Final run of Juneathon complete. 28km and a little over four and a half hours.