This morning was the second running of the Thames Hare & Hounds running club's Second Sunday 5, a new regular 5-mile race race held on Wimbledon Common on the second Sunday of each month.

I ran the first event a month ago and finished about two-thirds down the field. The field was smaller this time, and everyone looked quite capable - uh oh! We started on time at 09:30 and, no exaggeration, everyone else shot off into the distance! I managed to keep the back couple in my sights, but due to the twists and turns of the course by the end of the first mile I could only see the red shirt of the chap in second to last place. 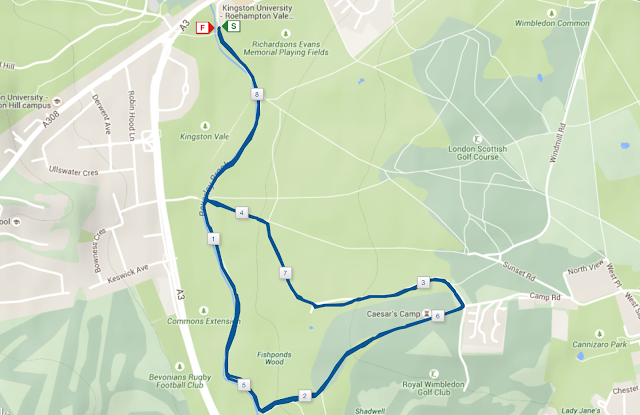 A "lollypop" style course, down from top, two laps, then back up to the start

I ran up the hill on the first lap, but on the second had to walk at the start. I used the down hill on both occasions to push hard and try and minimise the impact of my very slow uphill running. For the entire race I was running on my own, but for the last two miles I couldn't even see the guy in front, so it was up to me to buckle down and keep applying the pressure. I pushed hard right to the end and, despite coming dead last, was proud of my performance. I don't think I could have pushed any harder, and finished drenched in sweat!

Pace drops on the hills, more so on the second lap! Good pace increase to the finish, dug deep

My watch time was 44:34 which is slower by 47 seconds than the last event, however the course was different this time due to another event in the park. I measured it longer, 8.32km as opposed to 8.08km. Therefore my average speed today was 05:21 per km, compared to last time's 05:25 per km. So, I'm claiming that as a victory! Next time they're going back to the first course. I'd love to see sub-40 minutes, so I need to hit 04:57 per km - training required...

This Sunday also marks the end of the first two full weeks of June and therefore my 14th consecutive day running for Juneathon, which marks the 16th day of this run streak. I remember when looking at training plans for triathlon a long time ago now being very concerned about running on consecutive days - now I'm up to 16 consecutive days. Run streaks are nothing new, there are people who have run every day for decades! At the moment, I'll just claim every day of my 5th decade so far.

I'm starting to wonder what happens on July 1st - will I be happy stopping at 30 days? There's a guy on twitter who ran every day for Janathon in 2011 and simply didn't stop, and he's still going now.

Edit: A couple of people have already tweeted about British Olympian Ron Hill's incredible (and still ongoing) 50 year running streak. Here's a link to a BBC article on his amazing achievement.
Posted by Norm at 13:10