I enjoyed yesterday's route so I wanted to try it again, but faster. The nice thing about Strava is you can easily do things like this and it recognises you're running a route you've done and assigns cups (awards) for bettering your performance.

However, unfortunately yesterday was my birthday so instead of getting up and going for a run I sat and nursed the hangover that Dan-the-amazing-barman had given me. It was a lovely evening, followed by a slightly less lovely morning.


Instead I lounged around a bit before heading on up to the in-laws for a recharge of tea, and then on up to Matlock Bath for the night. We're driving around this week, catching up with people and taking it easy. 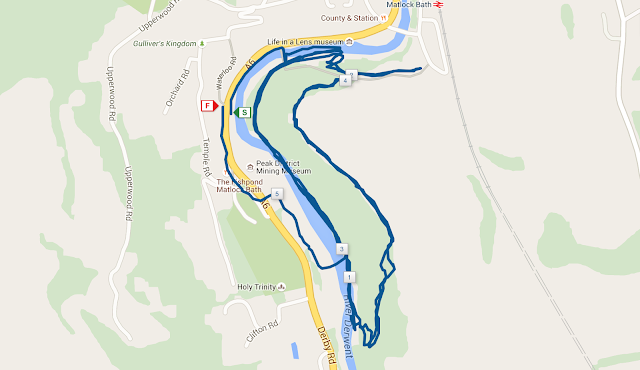 
So today's Juneathon run was in Matlock Bath, not known for being flat. I found a little park to run round, down by the river fora  few hundred metres, then up, up, up a winding trail to run along a ridge (amazing views, but didn't take my phone so no photos), before dropping back down to the river.