I've run the Capital Ring in sections over the last few of weeks. This is part 4 of 5.


As I was walking to the station in the morning to head back to Stratford I complained to Mrs, on her way to work, that my right Achilles/calf was a bit twingy. I decided to run anyway because I wanted to get to the end (no prizes for guessing the end of this story). 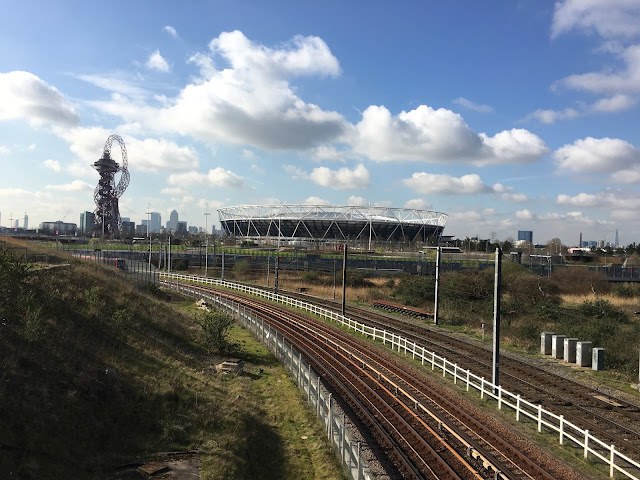 I was blessed with the weather for these days

Back in Stratford and I had a 10 minute stroll across the Queen Elizabeth Olympic Park to pick up the River Lea towpath again. I took time to bounce a bit and do some dynamic stretches to warm up my calf.

Near to the river in quite a desolate corner of the park I was stopped by a tourist with a very pronounced Welsh accent - he asked me where "Trafalgar Square and that kind of thing" was. I pointed at the silhouette of the Gherkin (or as it was christened, 30 St Mary Axe) off in the far distance, and told him it was beyond that. I suggested he walk in the other direction, where I'd come from, and get the tube. He agreed. Weird. I wonder how he ended up there, or where he started from? 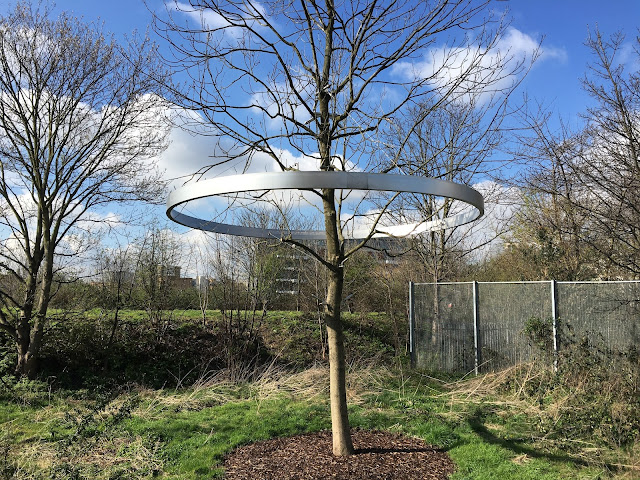 Tree with a slipped halo

Quite quickly I was faced with a closed footpath - this was to become a theme for the day. I was re-routed, after a few false starts, round some Thames Water building works - but was treated with a tree with a silver band hanging round it. The threads were fine and the band looked like it was just hanging there magically - it certainly drew a double-take.

Apparently it's a history tree (expand the section lower down the page) and there are ten of them around the border of the park - the bands weight as much as 500kg! Over time the tree and the band will intertwine and become one. The interior of the bands are engraved - I hadn't noticed that but I can see from the photo there's something there. 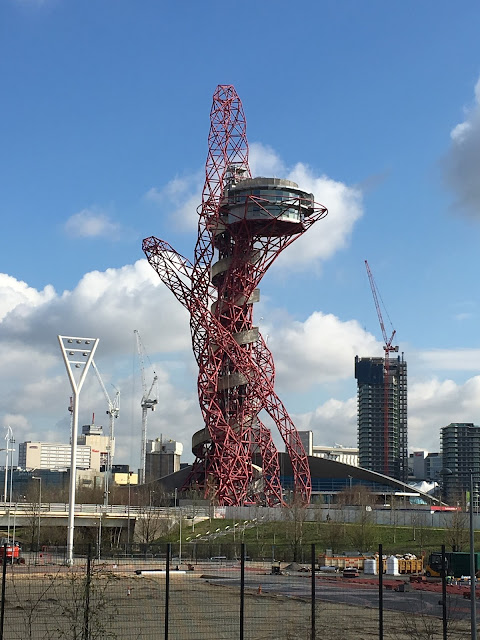 The plus side of being re-routed around the place was I got some great views. I've been really lucky with the weather this few days. The Orbit tower was very impressive. I hadn't been this close since my trip to the Olympics four years ago. 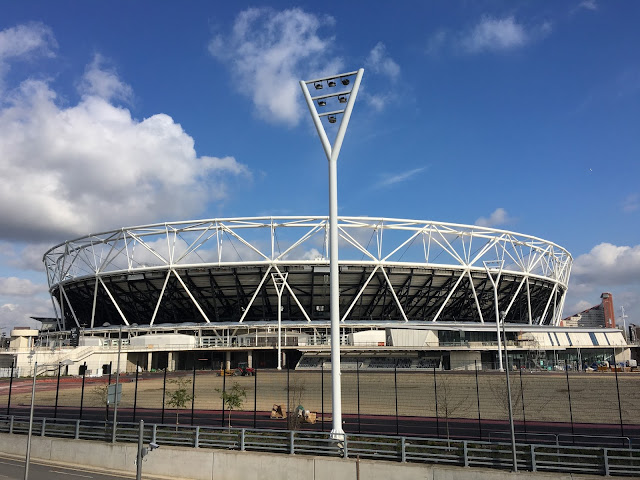 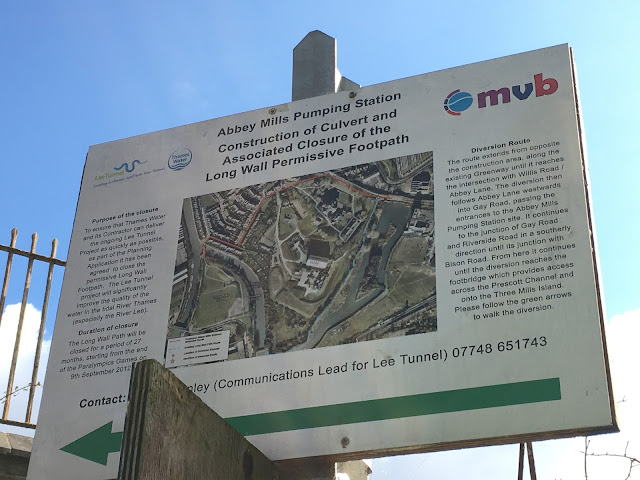 I navigated myself round only to find more closure - this time I couldn't get up onto the famous raised greenway heading South out from Stratford toward Beckton - Thames Water to blame again, but to their credit once I'd worked out what was going on their signage was clear and helpful. 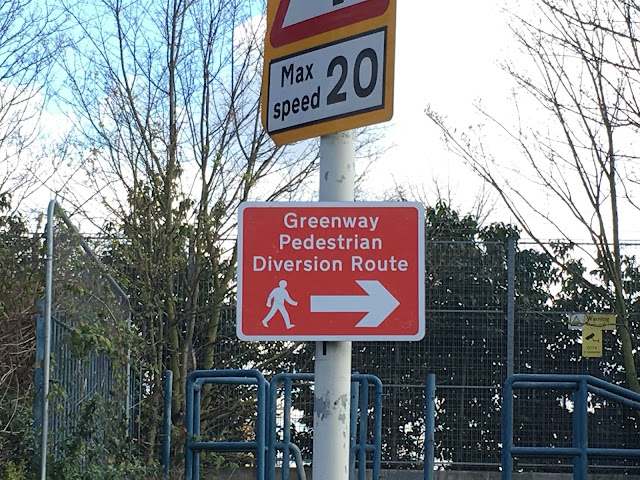 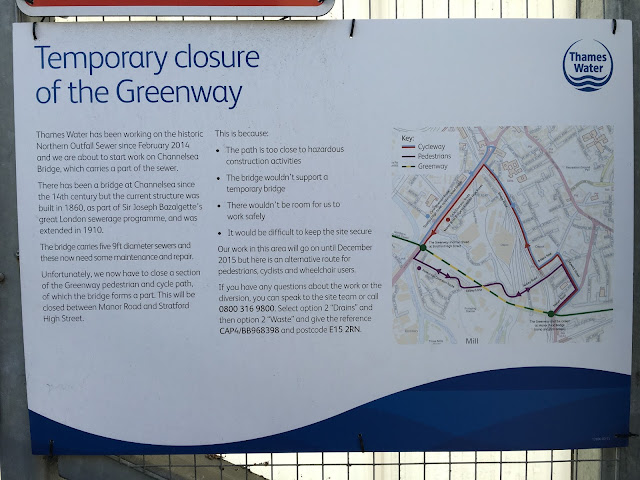 Full explanation of the closure

It hadn't been the start to the day I was looking for - plus it was baking hot - but I was on track now and had the long stretch of the greenway ahead of me. 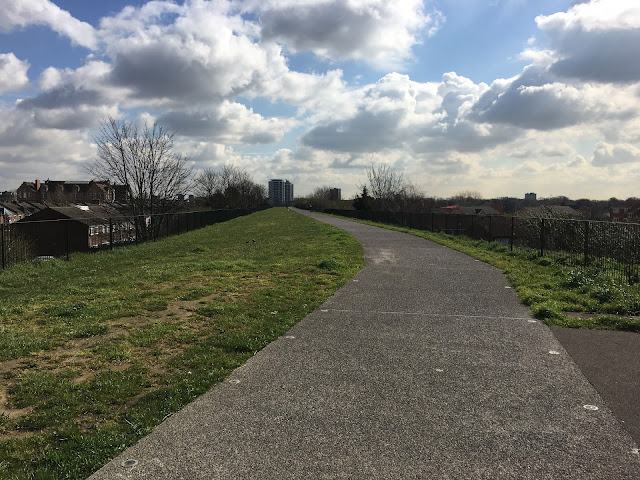 The Greenway runs for several miles and is straight, flat, and fast. It would make a great point-to-point parkrun, but you'd have a hell of a walk back to pick up your bag.

Dropping down off the Greenway I headed into Beckton, and across Beckton park - home of Beckton parkrun, my current PB course (21:13, thanks for asking)! I remember running the inaugural here and chatting to the event director from Valentines parkrun (which I hadn't run at the time). 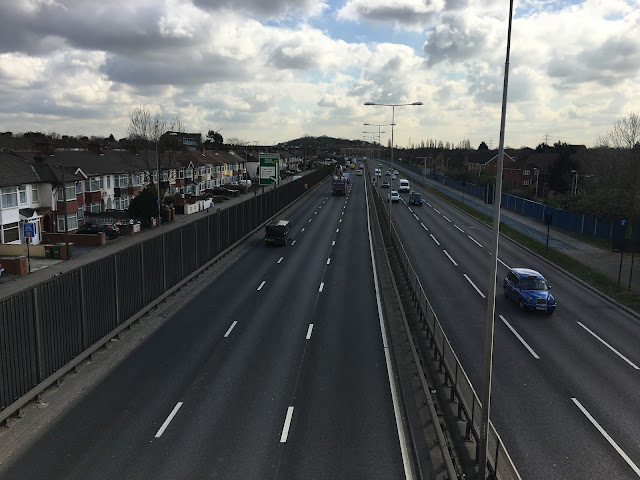 One of the many foot bridges over major roads

One of the interesting things about this route has been crossing over and through areas I've known well from the past and seeing them from a different angle. The picture above is the A13, I commuted by motorbike under it hundreds of times when I lived in Southend and worked in Docklands, and I've driven under it dozens of times. It's the first time I've ever crossed it on this bridge though. 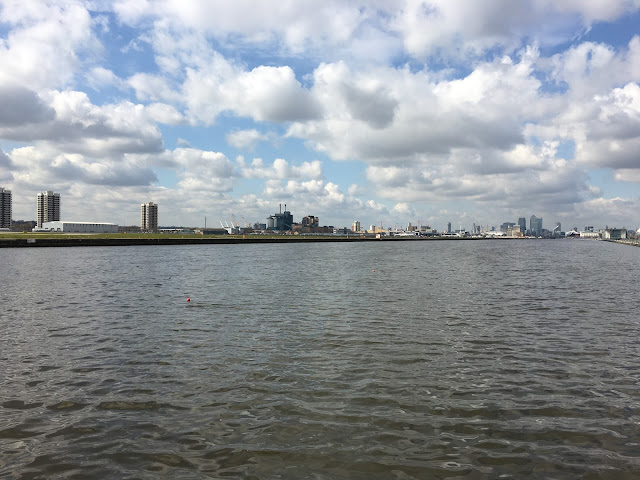 Looking out across to the runway of London City Airport

After the A13 I headed under the Docklands Light Railway through Cyprus station, and through the University of East London - which was utterly deserted. The next few miles were dockside, as I ran out round the University grounds and then dropped onto the Thames as the route starts to head West. 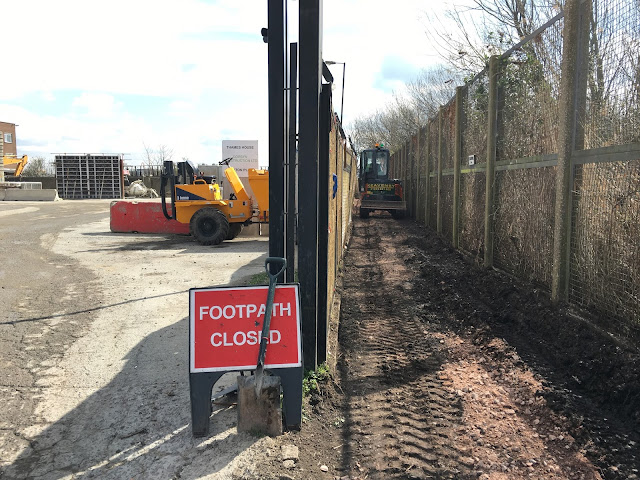 "Footpath closed" - I can handle that, but where should I run instead?

My calf was starting to play up now and running was unpleasant.  Running up any kind of incline was starting to get painful. I was hoping to run the ring in four units of approximately 30km. I'd covered about 13km so far, I didn't think I'd get to 30 today. 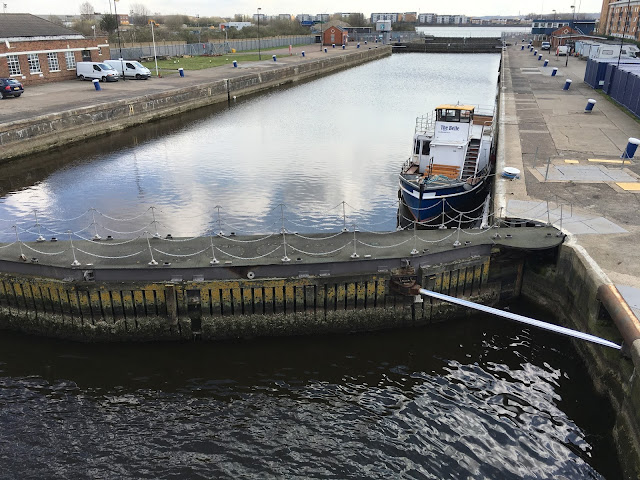 I ran round the locks and followed the river. The going was hard now, and there was no need to injury myself (I'm not racing anyone or anything after all) so decided it would be a good plan to stop at the foot tunnel. 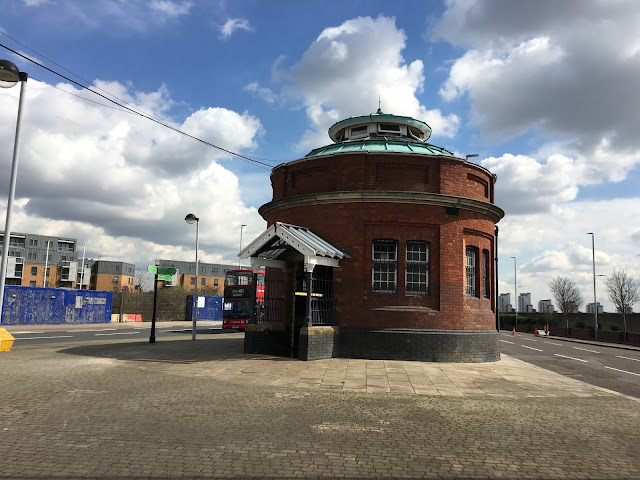 The North entrance to the Woolwich Foot Tunnel

The Woolwich Foot Tunnel was a welcome sight.  It runs underneath the route of the Woolwich Ferry - I'm not sure I've ever seen the ferry before, I generally only hear about it when it's reported as not running every time there's some wind, or it's raining, or it's a day with a "y" in it... It was running today, however, and was providing sterling service, fully loaded with lorries and cars. 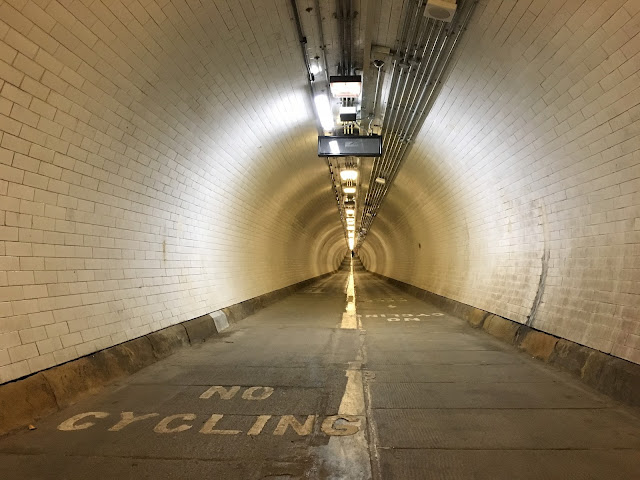 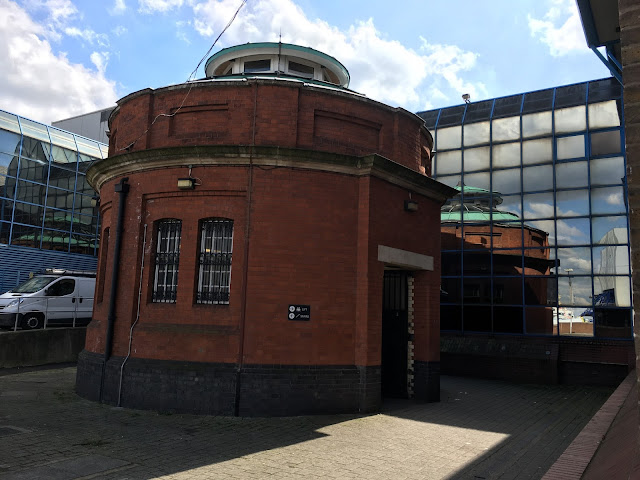 The South entrance was hidden behind a new development. I was looking for a convenient "out" by now, but there wasn't anywhere obvious to stop for a coffee. I decided to run down the Capital Ring a little further, it was coincident with the Thames Path for a while, and I got a good look at the Thames Barrier with the Canary Wharf estate and Isle of Dogs behind it. Very shiny. I also ran past an enormous canon. 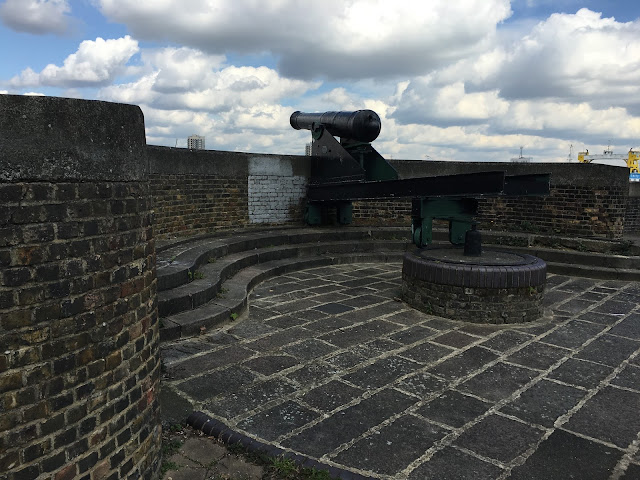 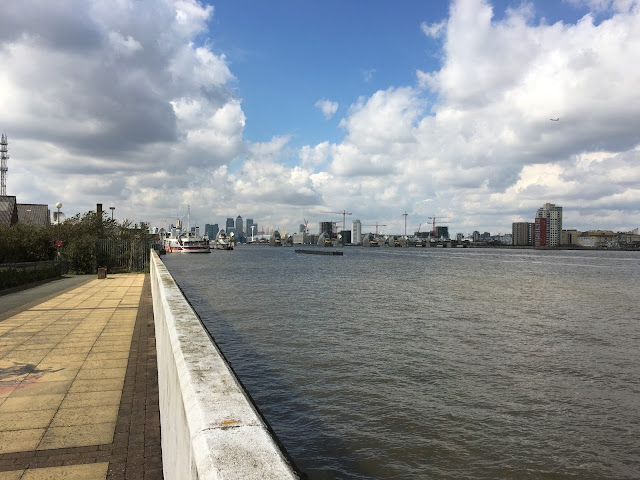 Eventually I found a convenient break point - the path took a sharp left off the main road into a park, and just a short distance ahead was Charlton Station, so let's call it a day. It's another 17km in the bag, and only 14km left for the last leg. I think I need a few days for my calf to recover - no point getting injured for no reason. 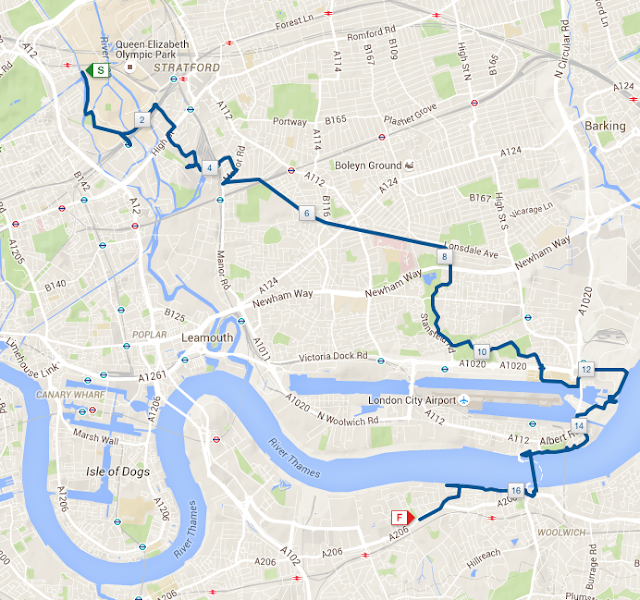 Today's run - the Greenway is very obvious from around 5-8km

Today's run was 17.9km, in a very slow 2:30:56 - I put that down to multiple closed footpaths, crap redirections, and a very slow final few km as I tried not to hurt my calf and Achilles any further. One section left, around 14km by my reckoning. I'll give it a few days before returning to Charlton for the last leg back to Grove Park.
Posted by Norm at 11:00