New year runs in the U-S-A!

I've always enjoyed New Year, and since I entered the world of parkrun I enjoy it all the more. There was the famous (and once in a lifetime) New Year's Day triple in 2012, and the tourist trip to Middlesborough in 2014 where we celebrated the coming of the New Year in a Harvester and ran Stewart and Albert parkruns. In 2015 we ran a Reading parkrun double of Woodleigh and Reading, and there was last year, 2016, when I went away with Mrs to bonny Scotland, and we celebrated Hogmanay, saw the Northern lights, and ran three Scottish park runs in two days (St. Andrews, Camperdown (Dundee), and Perth). Whilst at Perth we found out about the third run available on that day - the (apparently) famous Blairgowie New Year's Day Fun Run - 6km flat-out racing round the village! 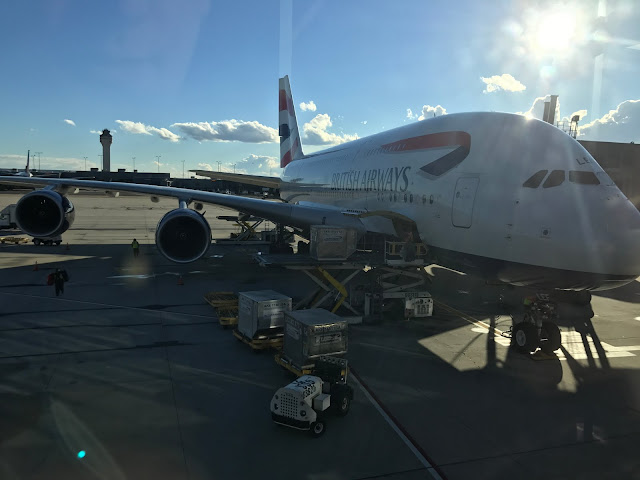 This year we decided to push the boat out even further, and, courtesy of a boat-load (plane-load?) of Avios, we hopped across the pond to Washington D.C. With three of the eight parkruns currently live in the US (Fletcher's Cove, Roosevelt Island, and College Park) and soon to be joined by a further two (Anacostia Park and Kingman Island), D.C. is certainly a beating heart of parkrun. 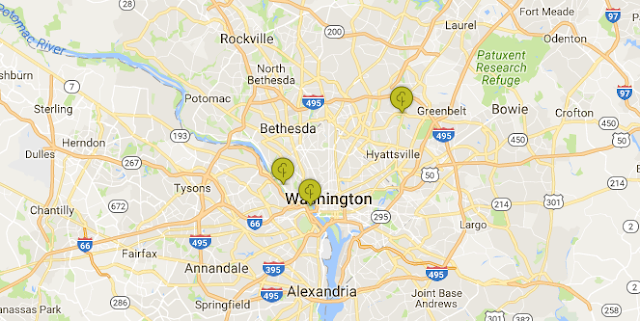 I was hoping we might be able to do all three events, one on Saturday, New Year's Eve, and a New Year's Day double for the other two. As Fletcher's Cove and Roosevelt Island are just a couple of kilometers apart I dropped the event directors a note back in November suggesting they may want to put on the first ever US double event - however, I wasn't planning on the third annual "Fit DC - Run with the mayor" event.

The Fit DC 5km is part of an initiative led by Mayor Muriel Bowser to help DC residents get fitter in the New Year. It's a free timed 5km run that starts at 9am (sound familiar?) on New Year's Day each year.

Given the overlap between this mission and that of parkrun, I wasn't surprised that parkrun didn't want to put on a clashing event. I signed us up, and looked forward to 9am, 1st January, 2017.

Only College Park was running on New Year's Day, at 11am to give people time to get across after running with Mayor Bowser. I thought we could jog up, until I learned it was 12 miles away... After a brief chat with Colin Phillips, husband of Event Director Andrea, we'd secured ourselves a lift - thanks Colin!

Colin, and the rest of the D.C. parkrun crew had a tent at Fit DC. They were very welcoming to us, and all the Fit D.C. entrants - it looks like they'd secured a few dozen new sign-ups too.

This is a really interesting course on Theodore Roosevelt Island in the Potomac river. It's a folded-P style, and only just about fits on the island. Most of the East side is swamp land, and a long section of board-walk covers that area. The main feature is the Roosevelt monument, set on the highest point of the island. It looks like there's an accompanying water feature, but it seems to be off out of season. 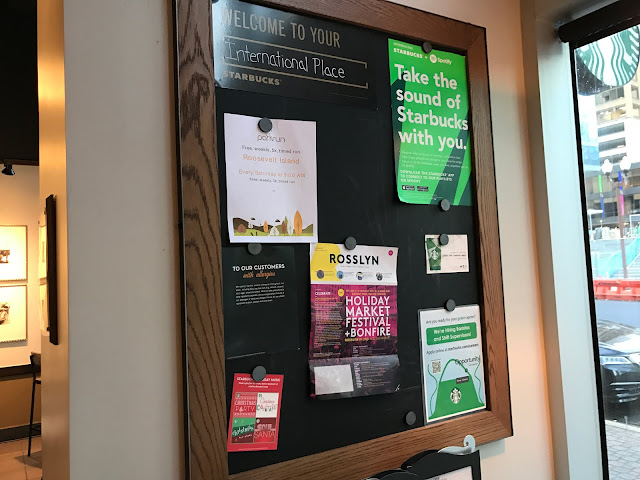 The local Starbucks had a Roosevelt Island parkrun flyer 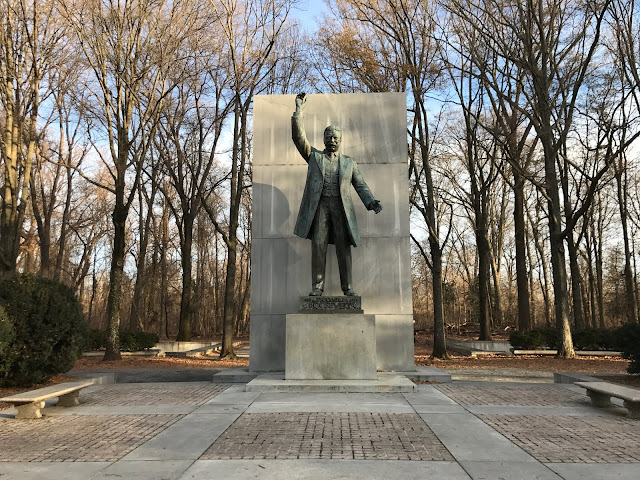 The statue of Theodore Roosevelt 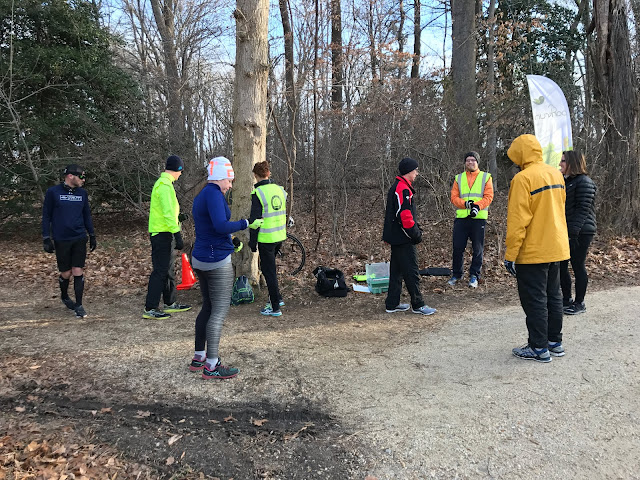 I set off hard, hoping for a quick time on the undulating course. Running on the board-walk was great fun - it springs very slightly and means you can virtually fly along. I ran the first couple of kilometres a bit faster than I should, for as I rounded the loop of the P to start my return journey my legs were complaining. I didn't have much left for the last kilometre, and was quite slow up the shallow hill to the finish.

Great fun though, small and perfectly formed, I'd highly recommend it to any tourists. 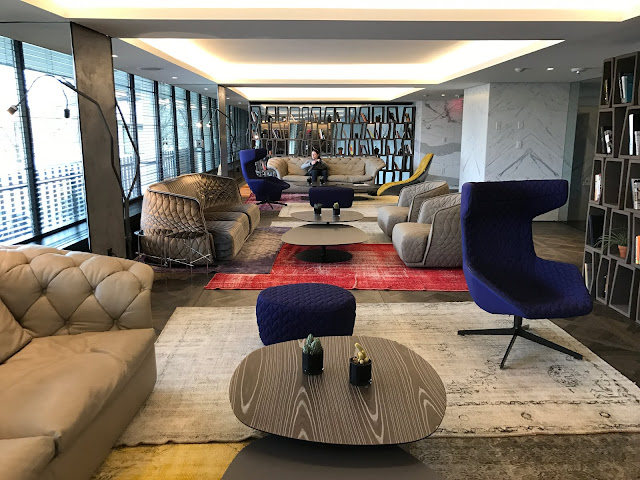 The Fit D.C. course was on East Potomac Park - a wide flat out-and-back entirely on tarmac. I ran the first half with Colin, and the second half with Colin and Andrea once we'd caught her up. There was a huge turn out, and many looked to be new or inexperienced runners - it was great, I hope they get the bug and start parkrunning. The Mayor did indeed run, and she was waving and high-fiving everyone all the way around - not at all what you might think Mayors are like. 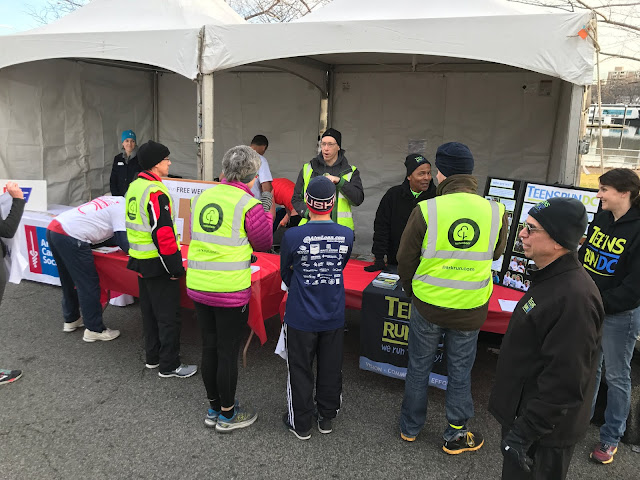 The parkrun tent was very popular 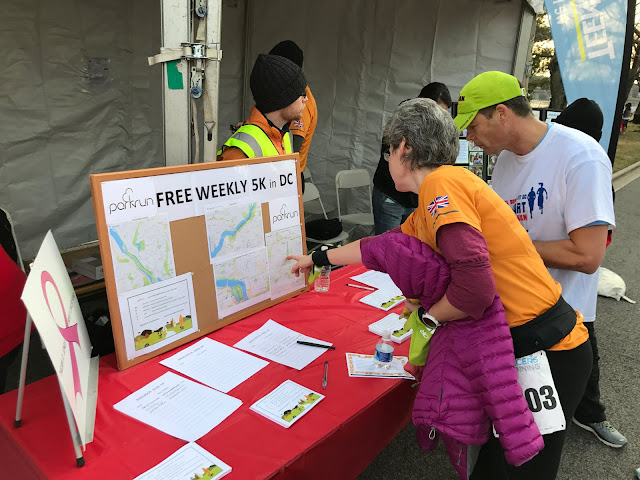 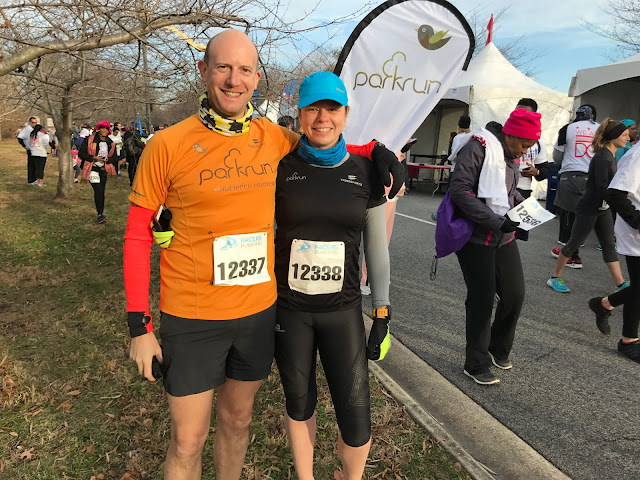 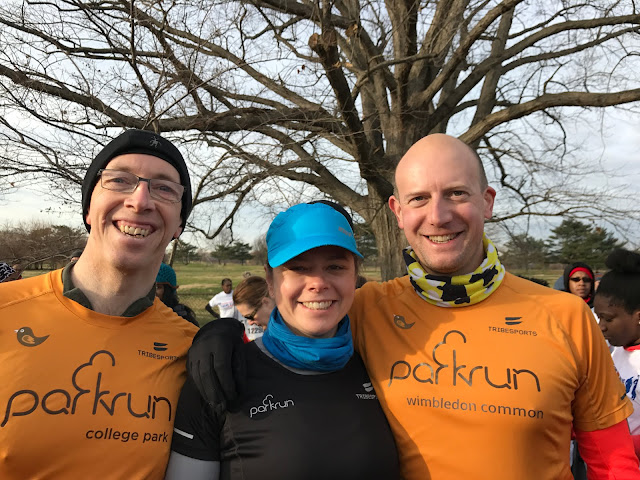 Colin Philips, Mrs, and me

There was a timing team there, and the race numbers were chipped, but I'm not sure if the times will be published - just like parkrun it was more of a run than a race. 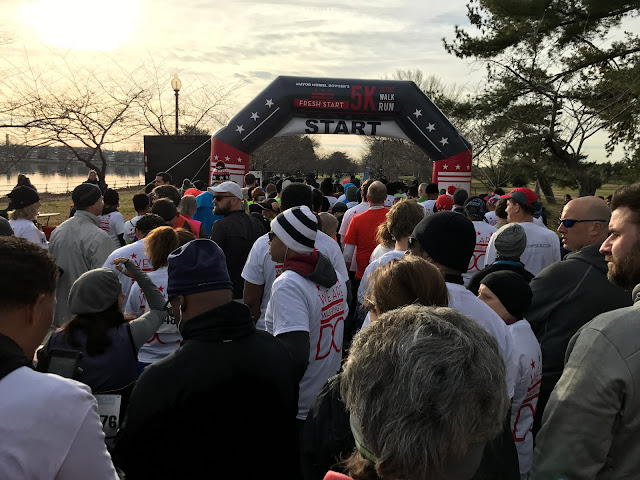 Well organised run, with a proper start/finish inflatable and free t-shirt - not bad! 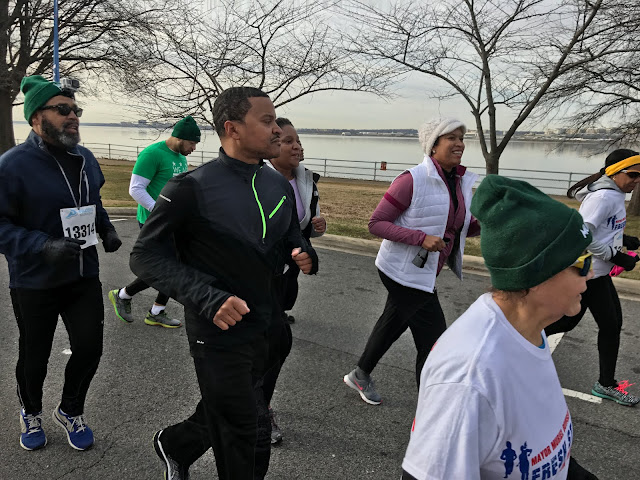 Quite literally running with the Mayor - Muriel Bowser, with the big smile and the fluffy white hat

Out and back round the tip of East Potomac Park

Hopping in the car we were ferried off to College Park - via Colin's house to pick up cake! I've been looking forward to this run for quite some time - it was to be my 200th different parkrun course (a "Double Cowell" in parkrun lexicon). 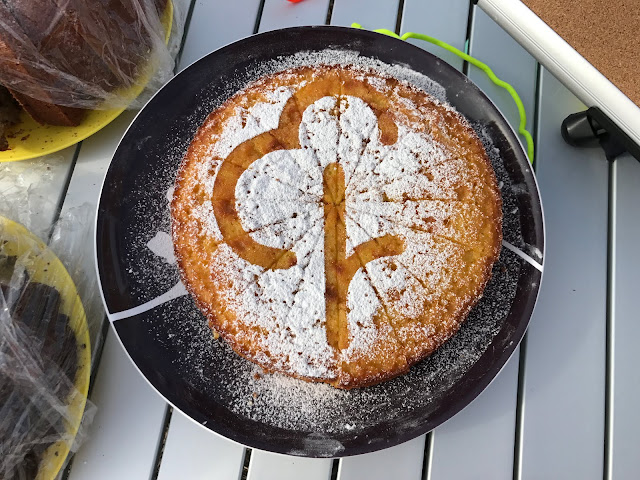 
There was a good turnout, including a couple who hadn't got the memo and turned up at 9am! I got a shout-out in the run briefing, and before long we were off. I was determined to put in a good time, and went off fast. The course was a flat out-and-back with a dead turn at the mid-way point. I set off with a small group, but they slowly pulled away and I ran 4km on my own, desperately trying to reel in the person in front.

Worked hard all the way, the turn-around is easy to see, and I saved a bit for a quicker finish too 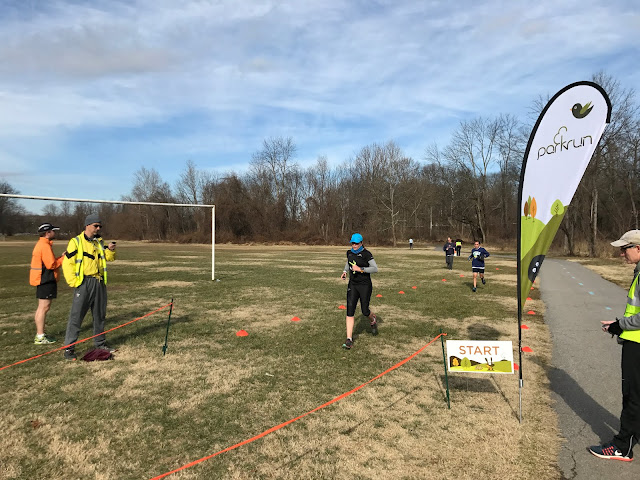 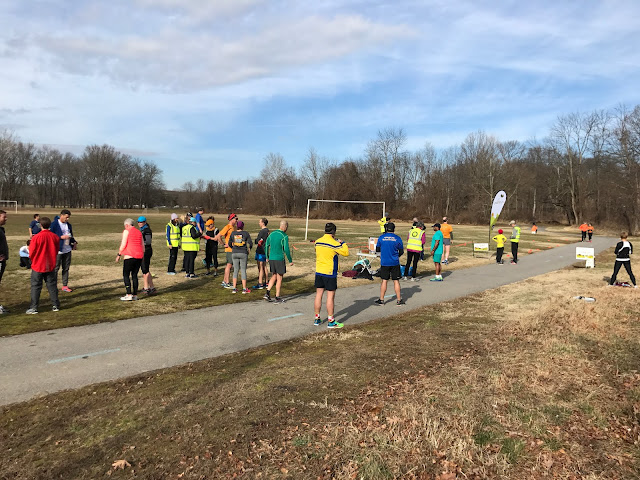 The finish, with plenty of volunteers on hand

I didn't catch them, but I did finish in a very respectable 21:55, for my 5th fastest parkrun ever - I'm certainly not going to complain about that! 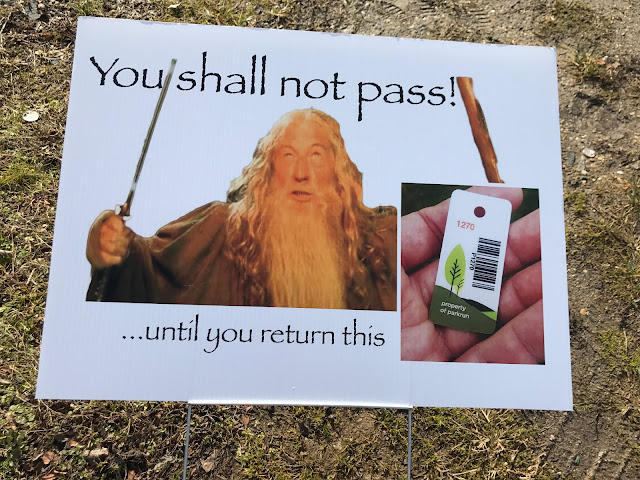 
Other runs we did this week

A run up to the Capital Building on the first day, trying to combat the effects of jet lag (then we got blindsided, and almost snow blinded, when it started snowing - as much to the surprise of the locals as to us). 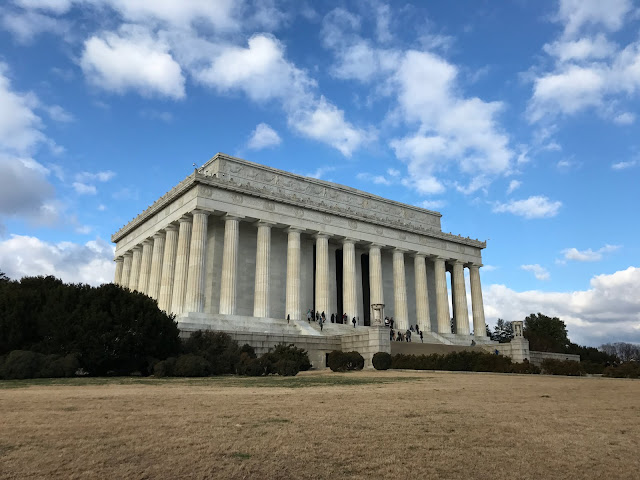 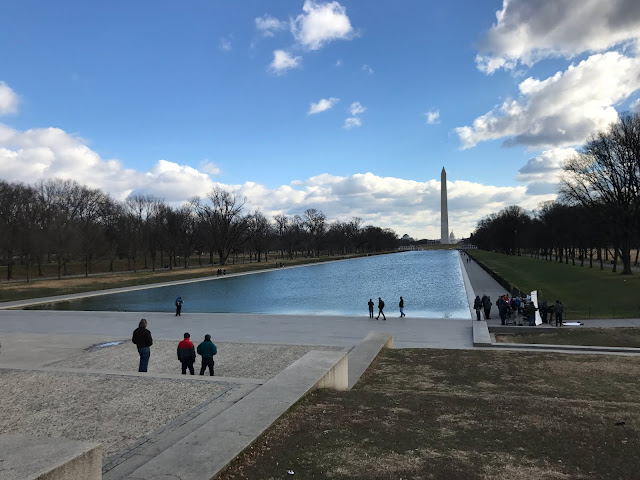 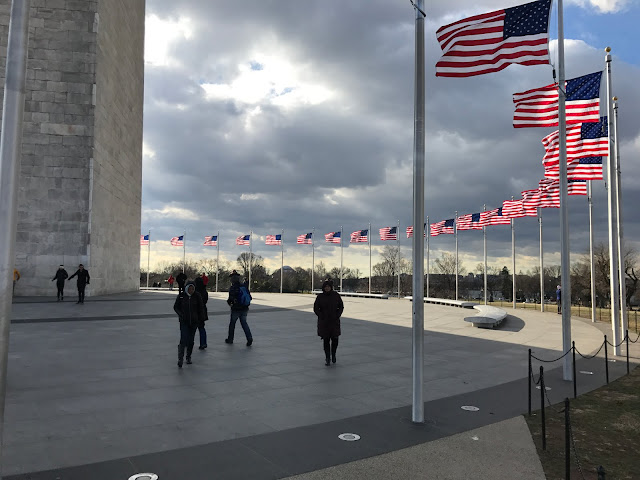 Flags are positioned around the base of the Washington Memorial 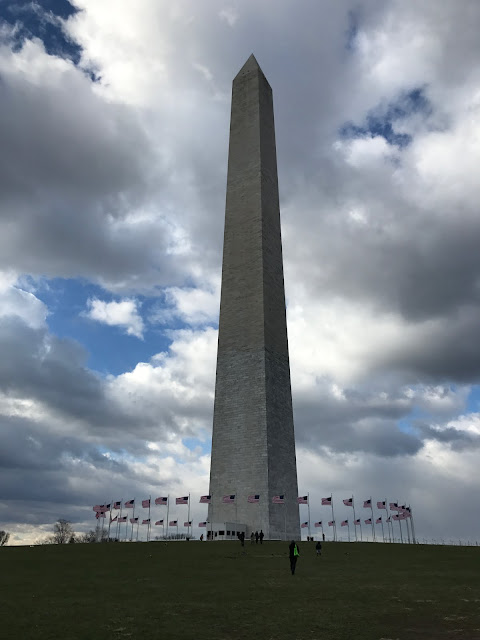 The memorial is absolutely enormous, far larger than I was expecting 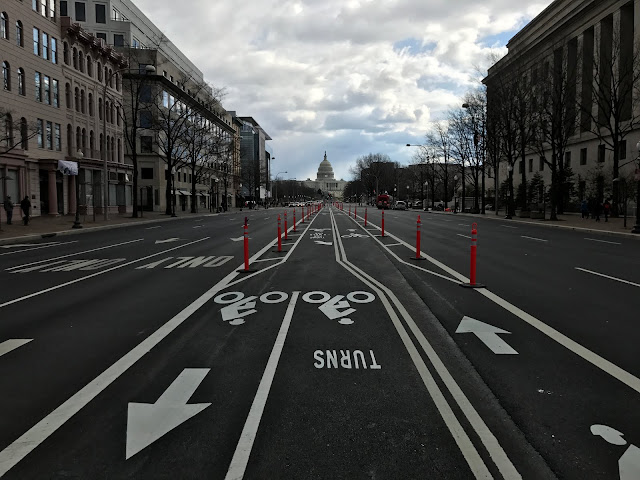 Looking up to the Capital building 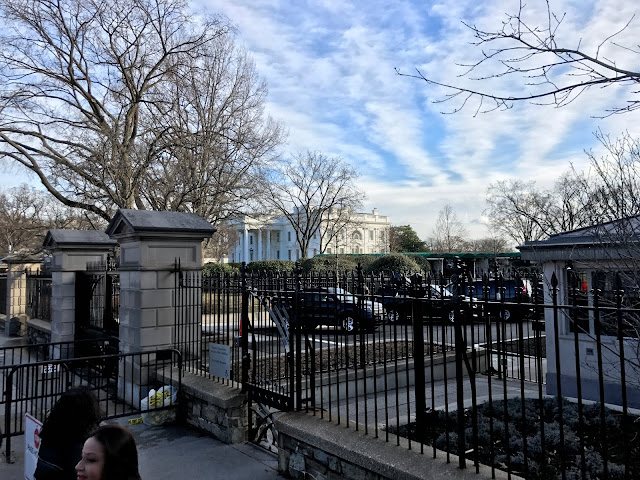 Run down the river in a sustained heavy rain shower, only for the return path to be nonexistent, so we had to run back the way we'd come - on the plus side we now know the Fletcher's Cove parkrun course too! 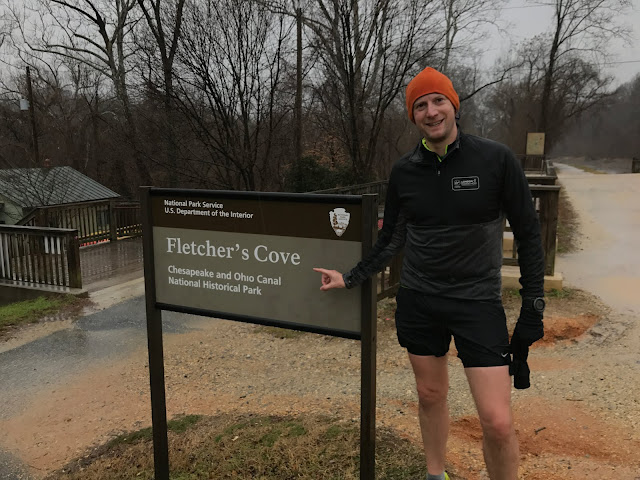 Another parkrun location ticked off

A couple of Roosevelt Island freedom runs (or one at least, given a routing error the first time i tried it), plus a lovely run on our last day to the South to look at the Pentagon and the 9/11 memorials. 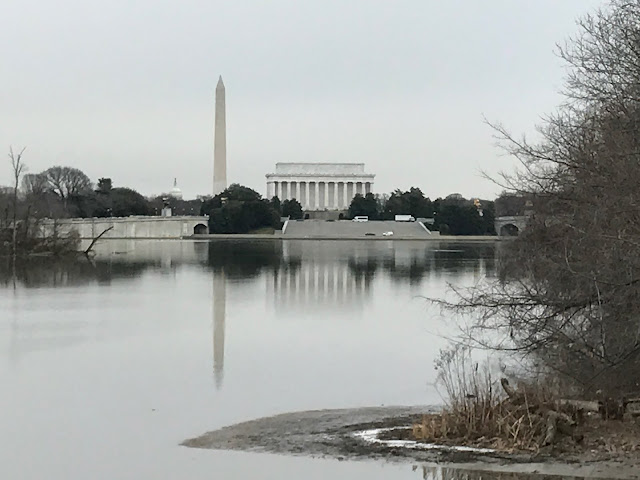 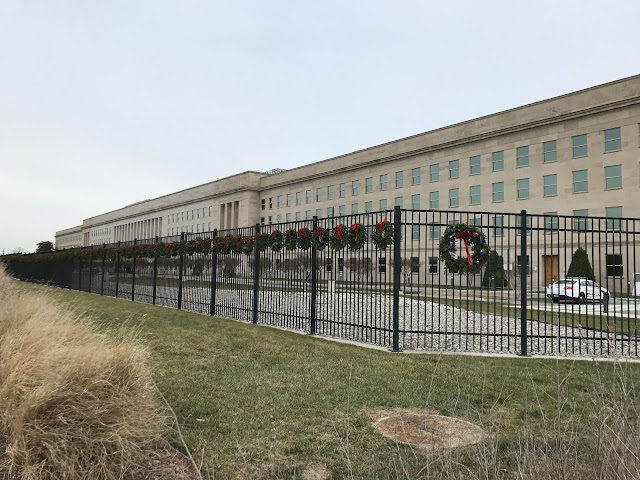 One side of The Pentagon - also absolutely enormous 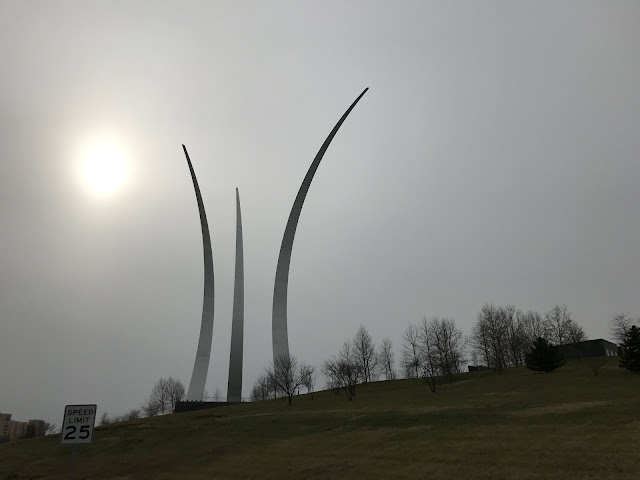 The Air Force Memorial to 9/11 - a staggeringly beautiful structure 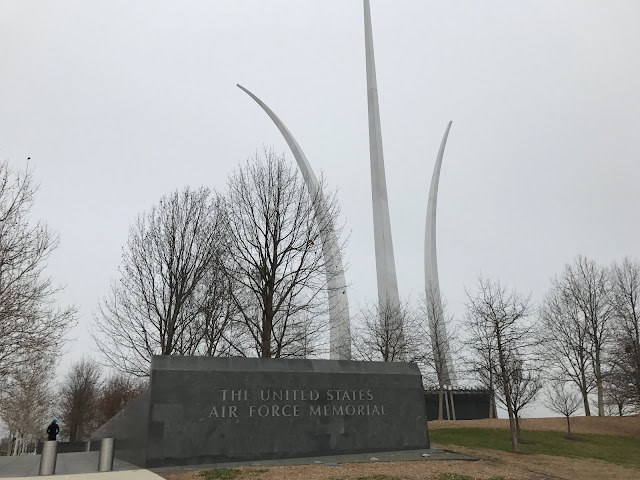 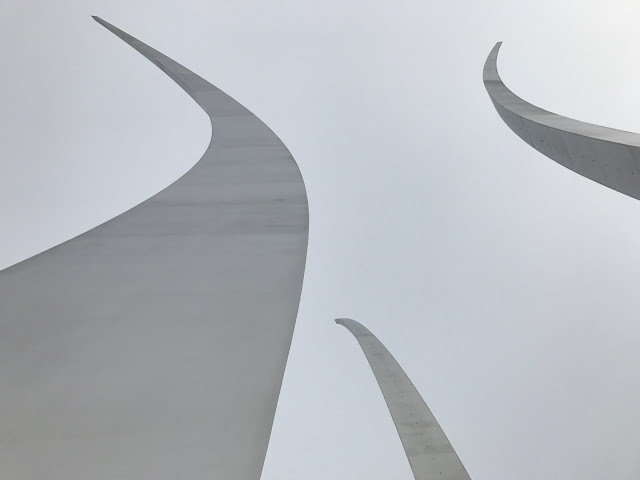 It's beautiful from every angle

Our last morning's run, including a loop of Roosevelt Island again, just for fun