I've fancied a crack at Go Beyond Ultra's Country to Capital race for a while. Mrs has run it twice before, in 2014 and 2016. Until relatively recently, entering a 43 mile race would have felt like lunacy - but now with two 50 mile races to my name 43 miles felt quite manageable. 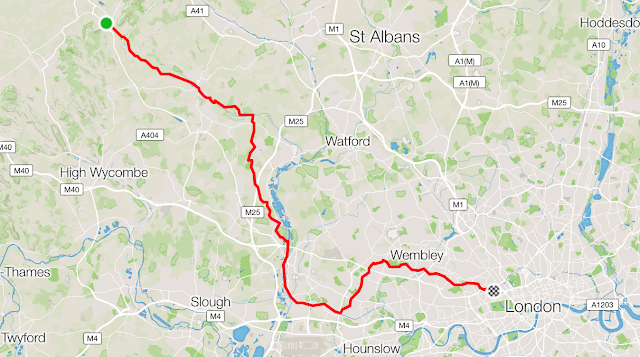 The race is just as it says on the tin. It starts in the country, Wendover, and finishes in the city, Little Venice near Paddington. The first half is primarily on well used trails away from built up areas, and the second half is along the Grand Union Canal towpath and moves through the industrial outskirts, urban ring, and re-developed centre of London.

Mrs and I entered the race at the same time and were assigned sequential race numbers - amusingly, a transposition of our Ironman 2012 assigned numbers (and reason for the name of this blog).

We stayed over at The Red Lion Hotel (noisy) so we could get up at a sensible time and have a light breakfast ahead of registration at The Shoulder of Mutton pub just up the road. 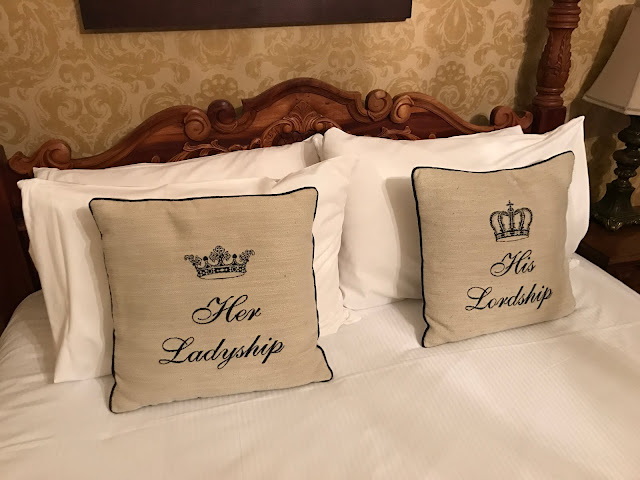 * Other configurations are available

Registration was very busy, with over 300 entrants to get through it was bound to be crowded and chaotic. We bumped into James from Centurion and old friend and parkrun tourist Mike. 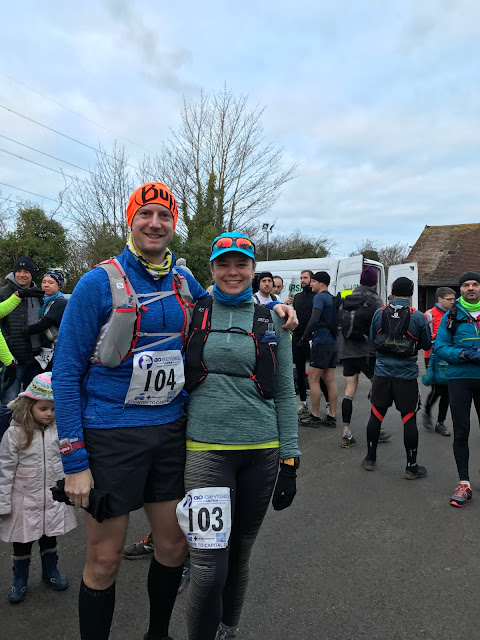 Me and Mrs, ready to go 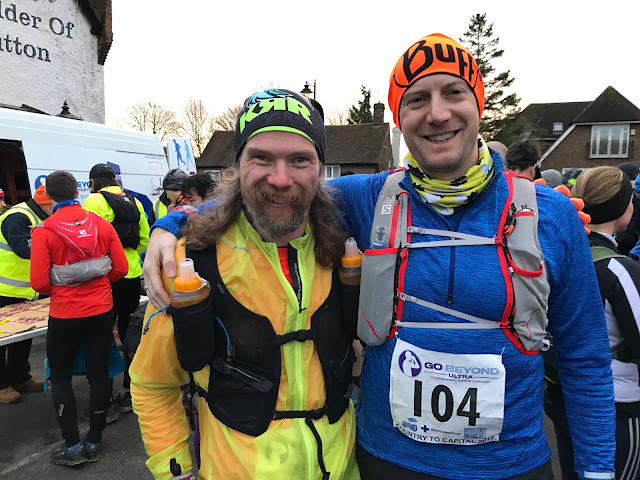 It was cold, but not unmanageably so. My choice of merino t-shirt for base layer, long sleeved merino mid layer, and long sleeved outer seemed to have been the right choice. A little later than the advertised time of 08:30, and after a race briefing that was spoken over so much I didn't even realise it was happening, we were off.

The race starts with a 300m sprint down the road to a narrow chicane onto a pathway. Those who want a shot at winning know getting through this early pinch-point quickly is essential, so as the main pack jogged down the path the front runners set off at full tilt!

Mrs and I had decided to run together, not something we've done in a race before. We ran together a lot last year, particularly during the 6-day traversal of the North Downs Way, but we haven't run together in a race - and not for as far as 43 miles. 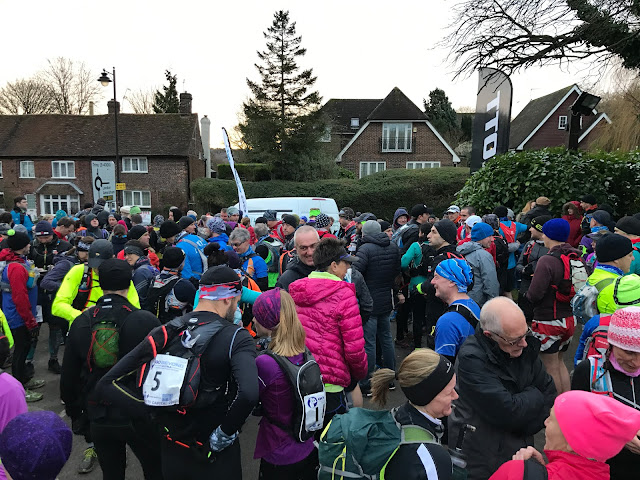 Assembled for the start, out of the car park and left down the hill

The opening stages of the race went well, we stayed together and made good progress. About 10 miles in Mrs started to feel a lack of energy, like she couldn't get properly warmed up or into a good rhythm. She's got an amazing diesel engine for running - once she's up to temperature she can run forever, but today it just didn't seem to be getting going.

Having covered the first third of the distance fairly well, we slowed considerably up to half way where the route joined the canal. Without talking about it too directly we covered the option of DNFing a couple of times, but decided to push on.

Jogging slowly, but still covering ground, we made our way down the first section of the canal and to the left turn to Paddington - that marked 30 miles down, 13 to go. 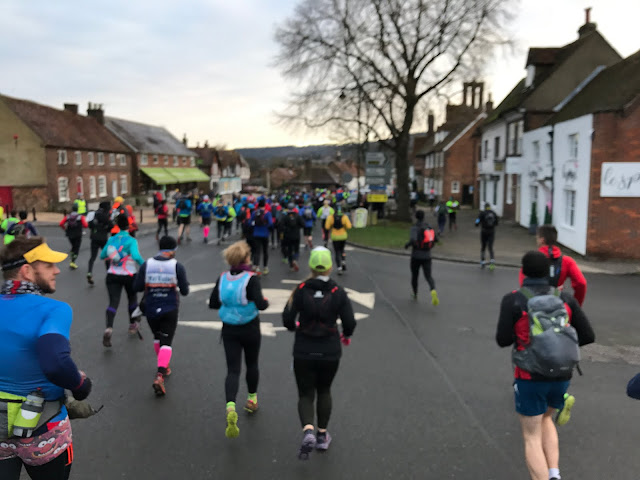 The run down to the first pinch point

The going now was slow, with a fair amount of walking. We made sure to walk with purpose when we did walk to continue covering as much ground as we could. In between the last two checkpoints we decided to stop trying to run, and route march the last 10km (6 1/4 miles). That took the pressure off trying to run, and meant we could focus on fast and deliberate walking.

Darkness had fallen and we were wearing our head torches. The temperature dropped markedly, and that helped motivate us to keep going. Mrs moving well, despite aches and pains and a lack of diesel engine, and we were covering a kilometre every 10 minutes. 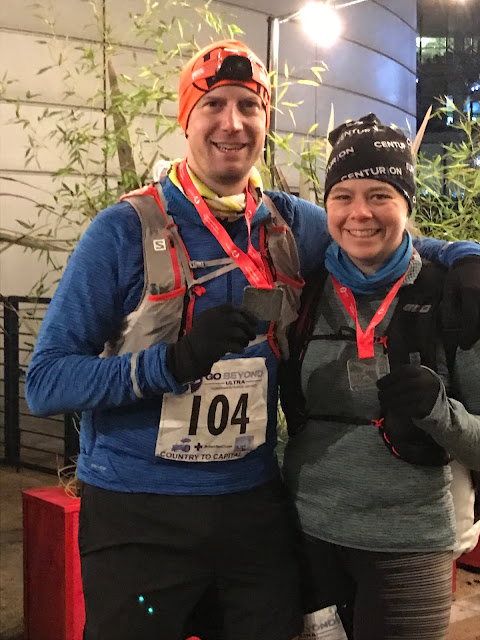 We got to the finish in 9 hours and 51 minutes for 293rd and 294th place out of 312 finishers - a full hour slower than Mrs had run it last year. I'm proud of our race - we kept going, stayed together, and pushed on through to the end. I'm proud of Mrs for pushing on and finishing when it would have been so easy to throw the towel in. It would have been very easy for us to stop any number of times - but we didn't.

How not to pace 43 miles - lots of walking, and only walking (briskly) for last 10km

It was a pleasant surprise to see Louise at the finish, and she joined us in the pub afterwards to chat, warm up, and refuel. I don't think Mrs will run Country to Capital again, she's come to the conclusion, after three completions, that she just doesn't like the course. I will consider it next year, I feel like I have unfinished business and I'd like to see what kind of performance I can put in. 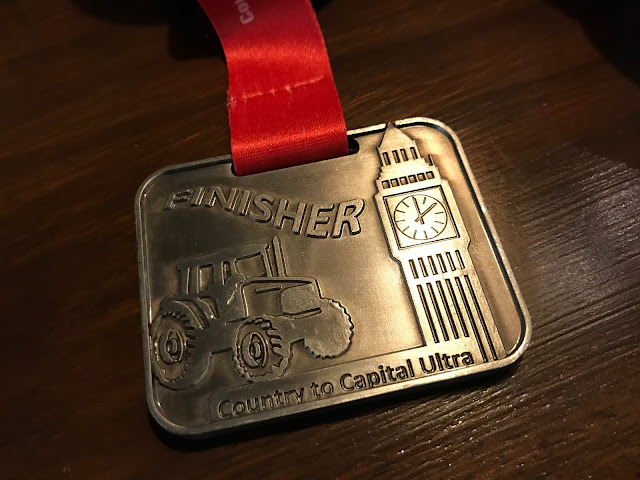 All worth it in the end - another one for the collection