The Christmas holiday period is always fun in parkrunland. The wonderful Event Directors, ably assisted by their armies of volunteers, not content with giving up their time for free on Saturday mornings for fifty-two weeks per year like to put on extra events for us lucky parkrunners on both Christmas Day and New Year's Day.

A couple of years ago in the parkrun wild-west there weren't any rules as to how many extra events could be put on, it was up to the individual events to decide. All parkruns start at 9am (in England and Wales at least), but on these special days some events started later. This opened up new opportunities, and the plucky parkrunner could find two events near each other at convenient starting times and run them both.

New Year's Day 2012 was the peak of this opportunity, with a couple of "triples" possible. I ran Bushy Park with a 9am start, Nonsuch Park with a 10am start, and Riddlesdown Park at 11am, franticly cycling between. Riddlesdown was a bit further from Nonsuch than I'd bargained for - thankfully they knew a lot of runners were driving coming over so delayed the start for 15 minutes. Cycling, I was even later - I started at gone 11:20, running with the last of my energy down the start trying to catch sight of the tail runners. For a while the 31:12 was my personal worst time - still not bad considering the clock started five or six minutes before I'd even got there. It was a fantastic New Year's Day, and the experience was more than a little responsible for my now deeply rooted love of parkrun.

Now, with the global phenomenon of parkrun and new runs starting up almost every week it's been necessary to have a few more rules and regulations. This includes when extra events are permitted (now just Christmas Day and New Year's Day at this time of year), and how many events "count" - a maximum of two per day. If you can find a triple to do, the third won't count towards your totals (you can still log it as a "freedom run" though, should you wish to). 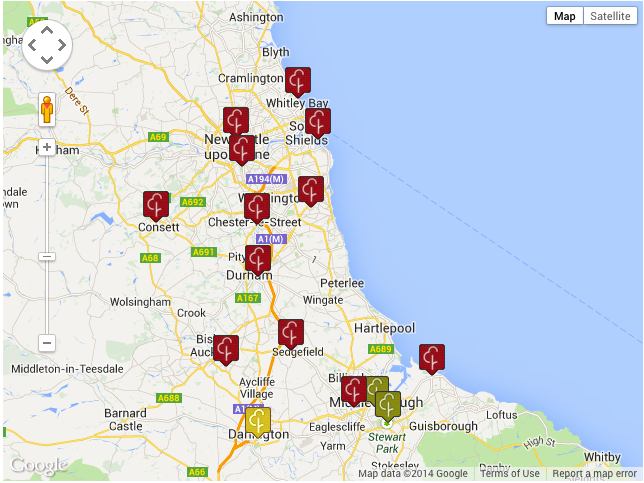 So this is why I was in Middlesborough - to take advantage of a New Year's Day double on two courses I haven't visited before. This is the kind of behaviour that brought "über-tourist" into the parkrun lexicon. There are people more parkrun-bonkers than me, of course, and I had the pleasure of the company of some of the bonkersest (that's a word, OK?) in Middlesborough.

On New Year's Eve Mrs and I met up with Louise (@abradypus and 8th on the UK Most Events table), Vanessa (@neferpuss and 10th), Ian (16th, on 80 events the same as me, but I rank higher as I've attended more inaugural events), and Nicola (@RoundshawOnTour and 32nd) on the train to the North East. Fizzy wine was consumed, as were BabyBel. Two of my favourite things.

We got to the Premier Inn, Middlesborough Central South, about 10pm. Über-tourist Rosemary joined us in the Toby Carvary next door. Convenience was the name of the game, so after a few more drinks and some "3, 2, 1, Happy New Year"-ing it was time for bed. 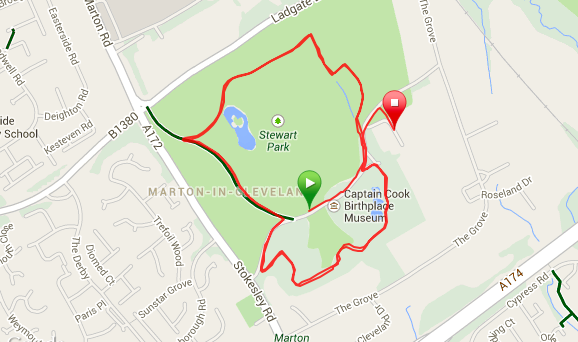 The delight that is Stewart Park parkrun

Slight headache pushed to one side by Premier Inn fry-up and coffee the temperature of the centre of the Sun and we set off to parkrun #1, Stewart Park. It was pretty damn cold out, but the park was beautiful. I ran round with Mrs in 28:46. A nice even pace as we had a lot further to go today.

A quick mince pie at the finish and a group of five of us set off to jog the 4km to Albert Park. I'm not sure if anyone else ran across, but I didn't see anyone. A few who were making the journey by car gave us friendly pip-pip and a wave.

For Albert Park I decided to see how much I had left, I wanted to get under 25 minutes. I huffed and puffed my way round to come in at 24:28 - I'll take that, thank you very much. A final jog back to the hotel for a shower, and it was off on the 12:50 back to London. 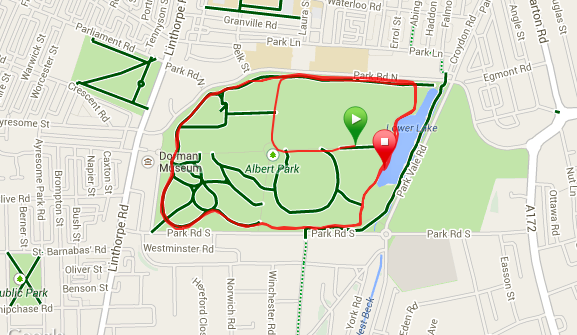 Albert Park, watch out for the icy wind by the Lower Lake!

This 6-week period is about building mileage and being in a good place to kick off a 12-week marathon training plan ahead of Rotterdam in April. It's going pretty well, I think. Happy New Year all round.