Thames Turbo race days involve Very Early Starts. Today's was a Very Early Start Indeed, as the first competitor was going to set off at 06:30 instead of the usual 07:00. This meant Race Briefing at about 06:25, and so even though we'd made the trip to the pool yesterday evening to register we still needed to get there for 06:00 to rack up and get ready. I have decided this year to cycle there rather than drive to get a warmup in. Therefore we were leaving the house at 05:20 for the 14km ride, and that meant getting up at 04:30! In my book, that's a Very Early Start Indeed.

It was cold, but dry. There had been some showers over night, but apart from the odd puddle you'd have been hard pressed to tell. Thankfully not a repeat of the rain-fest that was Race 1. We arrived and racked up without incident. I didn't see the exact time the first swimmer went off, but it seemed like they stuck to the planned 06:30 kick-off. I was bib 227 so I had a fair time to wait. I cheered Mrs as she started a few minutes ahead of me as bib 195. Her estimated swim time is faster than mine, so she goes off before me. You can check out her race report here. 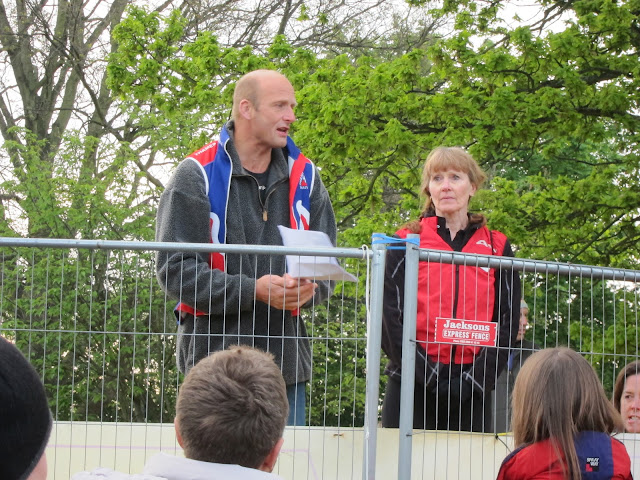 I followed my Race Strategy well. I'd eaten according to plan, and warmed up before the swim (a bit early, there was a wave break after the 174th person and that meant I was all but cooled down again by the time my start came). I'd set up my new Garmin Forerunner 910XT, but decided to leave it on "Other" sport for the duration of the race - I didn't want to be fiddling about telling it when I'd changed sports whilst trying to race. Maybe next time when I can do it without thinking. 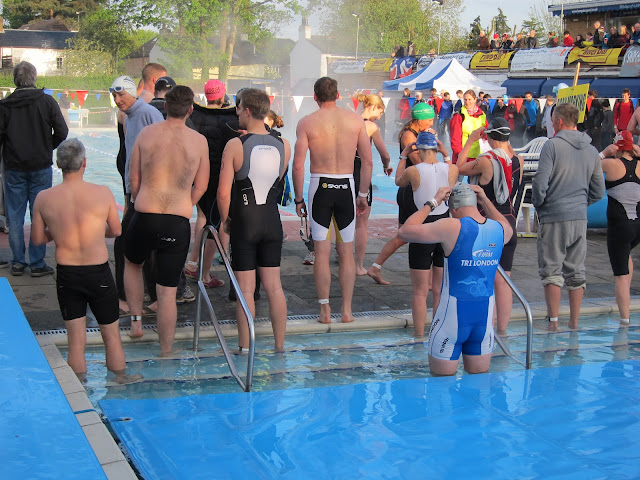 It was a bit warmer, but still cold enough for some pre-race foot-warming in the baby pool 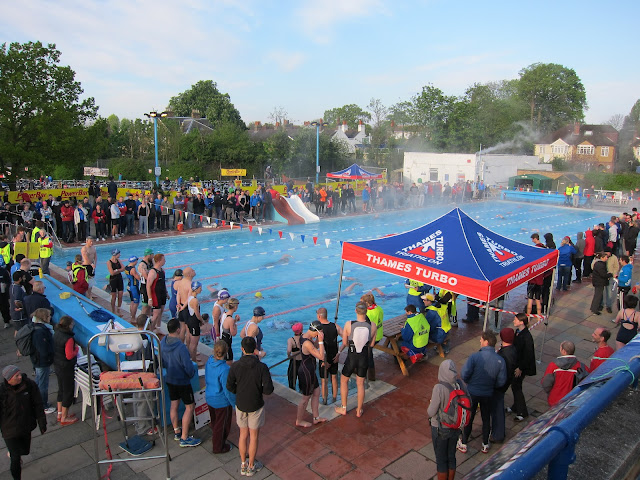 I set off well, not as well as I'd like, but certainly better than the thrashing about of Race 1. The swim felt faster than last time, so I was a bit disappointed to see I was only 3 seconds quicker over the 432m. Still, it's a PB swim time, and I can't complain about that. I think to get better in the swim I need to go out to the pool and become more familiar with it (as well as "get better at swimming", of course). 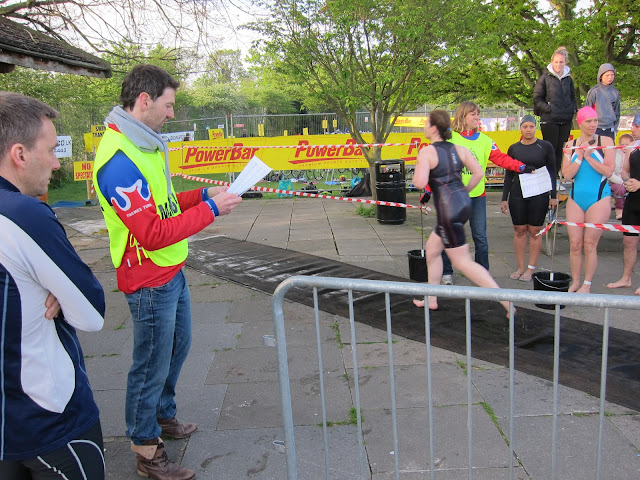 It took a bit of gaffing to get my feet in my shoes on the bike, but once in I shot down to the first corner (as per Race Strategy). I can definitely say I went for it on the bike. I pushed hard the whole way, focussing on the next section and the next person ahead. As there were 226 people in front of me, and my bike is strong, I caught lots of people. I enjoy seeing someone on the horizon and reeling them in, I find it helps me keep putting the power down. I caught Mrs with about 500m to go - I was giving it my all for a strong finish. It turns out I was the only person who overtook her - she was having a storming race!

I used almost a bit too much of the 7 minute non-compete zone - I worked out afterwards I'd used 06:56 of it! It was a nice breather though, and really nice to cycle back up to the pool with Mrs who finished just a few seconds behind me.

T2 was uneventful - again, quicker than in Race 1 at 00:49 as opposed to 01:06. I think there's time to be saved here though, I shall make a note to practice the transitions, as I never have done.

I ran according to plan too. Found my legs in the first km, wound it up a bit, tried to hold the pace (with some success) and just focussed on ticking the kilometre markers off. At only 5km you can put some effort in, but it's still long enough to end up blowing up if you go out too hard. I summoned up my strength for the last 500m and pushed hard for the final corner. As I turned it I sensed someone else behind me, and we both opened up and flat out sprinted the last 100m to the finish line. My Garmin says I hit 21.1km per hour! I held out by the way, beating him by what felt like just hundredths of a second. It turns out he was bib 226, so overall I'd beaten him by 10 seconds - that sprint was definitely worth it. 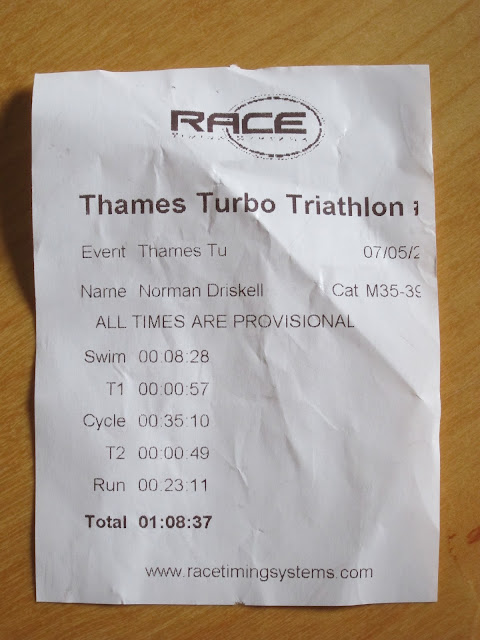 I bought my new watch in order to get heart rate data during the race - the Polar RS300X sports watch I wore previously whilst swimming (and therefore racing triathlons) doesn't provide a plot, just average and maximum.

My first trip out with the Garmin was a resounding success - after only the briefest of configurations I got a great plot.

You can clearly see:
From this I can see that I work hard on the bike, but have a lot more to give in both the swim and the run (in heart rate terms, at least).

I'd followed my Race Strategy well, and I'd given it a really big effort. I can definitely say I was trying hard. My time overall was 01:08:35, just 12 seconds slower than the last race. This says two things to me, firstly that my performance in race 1, in the freezing cold and rain, was far better than I'd realised at the time; and secondly that the training load this week had hit me and I wasn't fresh - I've run 4 of the last 5 days, and cycled 120km home from Northampton parkrun on Saturday (2 days ago).

I cycled home (very) slowly with Mrs who had also put a monumental effort in, and waited for the results to be published. 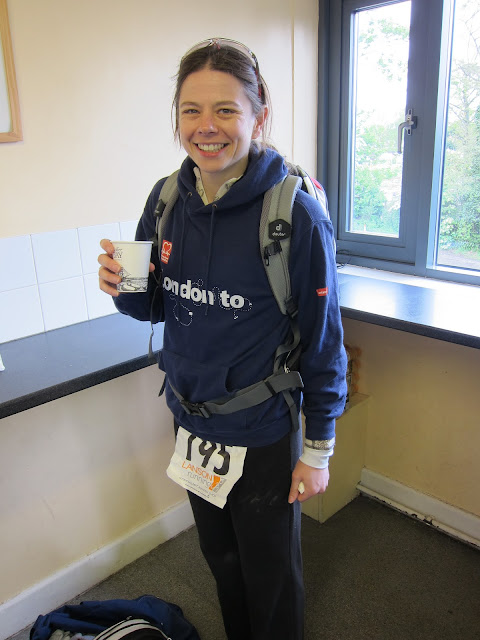 Mrs looking justifiably super-happy at smashing her PB by a phenomenal 3 minutes and 31 seconds!

When the official results came out, analysis had me double-checking my figures to make sure I was right! In this race my results showed that I was:
This is by far the strongest set of results I've ever had, and I'm absolutely overjoyed about it! I've got a lot to waffle on about the analysis I do on the results (the run and swim stats are not quite so impressive!), and where I place relative to those around me, but I'll save that for another day (there will be lots of interesting graphs, I promise). 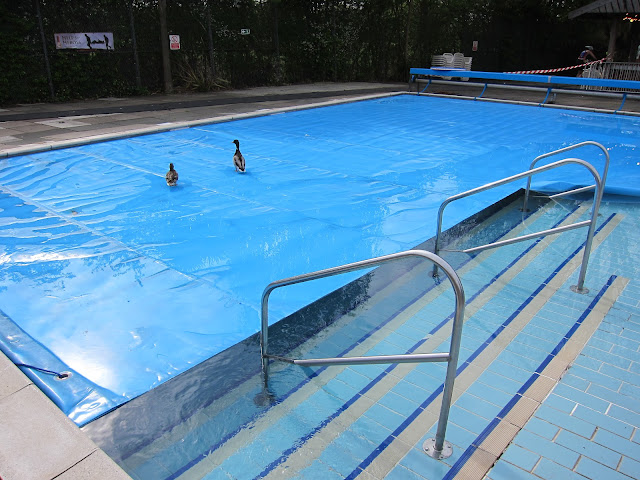 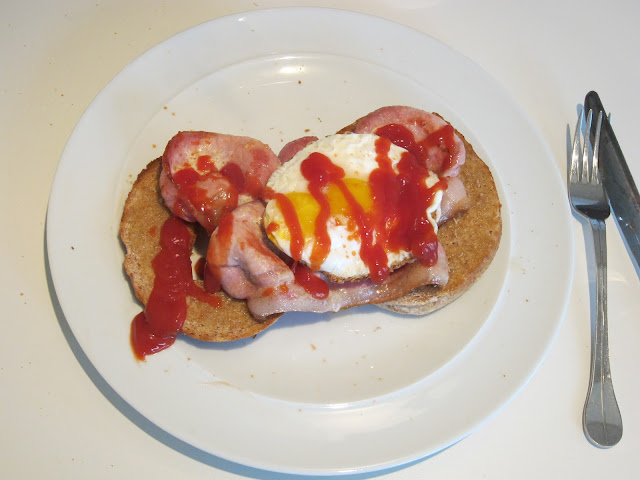 I feel thoroughly justified for stuffing my face the second I'd got home and got cleaned up. 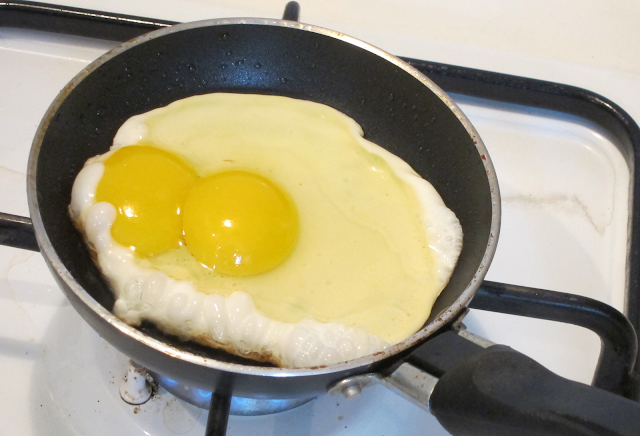 To make the day even more special, I had a double-yolked egg!!

The full Garmin log of the race is here.
Posted by Norm at 18:25