The 12 Turbo Sessions of Christmas

Mrs had a turbo for a while last year, and it was the least domestic-friendly thing I've ever encountered. Loud, pointy, heavy, loud, did I mention loud? It sounded like there was a helicopter in the house, there was no escaping the throbbing roar. We swapped it for some swim sessions with the coach I was working with at the time.

Fast forward 12 months, and given my ITB problem and inability to run for a while (more on that in a moment) I needed to up my cycling and I didn't feel like my low-intensity commute was really cutting the mustard. 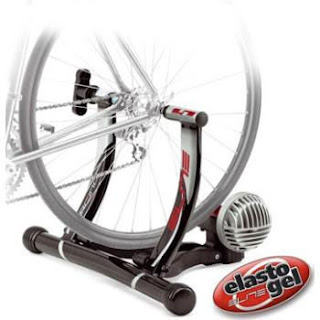 I took the plunge and got it from Wiggle.

I asked my coach, Joe Beer (twitter, website), for some turbo sessions and he sent me a set of 12 (actually, a set of 10, but session 9 has three variants). I thought a nice Christmas project to get my legs going around again would be to do one per day, starting today and finishing on January 3rd. Maybe I should have started 3 days ago?

Historically, every time I've announced an intention to do a training block in this blog, something has happened to scupper it. Let's hope I can keep to this one!

With regard to running, well I made the decision to quit running all together until next year. I've been religiously foam rolling, stretching, completing my asymmetrical exercises, and aqua running at Aqua Physio (excellent fun, much more than I was expecting). I still found though that 3x 5km per week was too much, and I didn't feel like I was letting the various exercises I was completing work to the best effect by continually stressing the area by running - it is an overuse injury after all. So I dropped to just 1x 5km parkrun for a couple of weeks, and then a couple of weeks ago after quite some ITB pain after a run I elected to cease running completely until next year. I think it's the right choice, and three weeks off completely, combined with the multiple angles of attack we worked out, I'm hoping to start next year in good shape.

On the plus side, it means I can get a few parkrun volunteer sessions done over the holiday period. I'd urge any parkrunners who find themselves injured to look towards volunteering - particularly if like me you very rarely ever volunteer normally (I think once, ever, until this injury!). It feels good to redress the balance.
Posted by Norm at 11:17