ITBS: A comprehensive plan of attack!

I put my cards on the table in a recent post regarding my knee pain. With (very) big aspirations for next year I need to go into 2013 fighting fit. So, here's what's been happening with my knee. My problem is a very common condition in endurance athletes so I'm hoping it'll be helpful for some of you - if not now, then in the future. Take note now, and you may even avoid an injury like mine.

First I went to see my GP - this is the right place to start in the majority of cases. She checked for obvious skeletal problems by wiggling my leg around and comparing my knees (it was probably more medical than that). I was anticipating a referral for some physio, but the GP had a good contact who specialises in problems like mine, so he was a good place to start. One referral letter later, and I was off to make an appointment at Wimbledon Parkside Hospital's knee clinic. 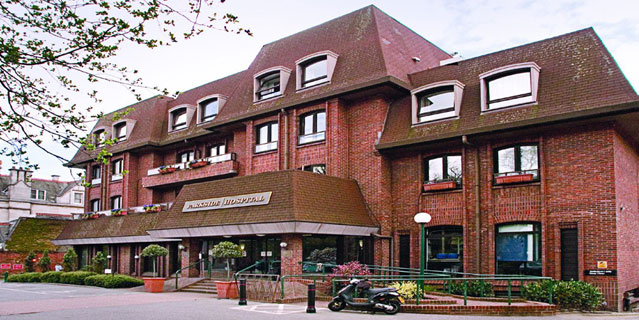 A few days later I saw orthopaedic consultant Dr Peter Thompson - his wiry frame gave him away as quite the runner himself. After talking through my history and in particular when I started getting pain, we ran through a series of tests and examinations. He looked at my balance, symmetry, and general skeletal condition. He identified a very minor difference in leg length, left leg fractionally longer than right. Most people have little asymmetries and differences from left to right so there's nothing to worry about there. From everything I said, he said it was clearly identifiable as Iliotibial Band Syndrome (ITBS).

ITBS is an overuse injury. Once it starts it will cause a problem every time you do whatever it is that irritates the condition. With me that's running, and it comes on after 5-7km or thereabouts. Wikipedia's definition is:


ITBS is one of the leading causes of lateral knee pain in runners. The iliotibial band is a superficial thickening of tissue on the outside of the knee, extending from the outside of the pelvis, over the hip and knee, and inserting just below the knee. The band is crucial to stabilizing the knee during running, moving from behind the femur to the front while walking. The continual rubbing of the band over the lateral femoral epicondyle, combined with the repeated flexion and extension of the knee during running may cause the area to become inflamed.

Dr Thompson advised I get it checked by ultrasound to confirm his suspicions. I've never had an ultrasound before, it's normally a procedure I associate with pregnancy. In advance he said I should run until it hurts to ensure that any condition was clearly identifiable. I popped back a few days later having run 5km the night before, and a further 5km at lunchtime. The ultrasound revealed good news and bad news. The good news was that my knee was not pregnant (it's OK, panic over!). The bad news was that there was clearly a dark patch underneath the IT Band termination. This is the fat pad, and it was inflamed.

Back to see Dr Thompson and he verified his earlier ITBS diagnosis. He referred me to leading consultant physiotherapist, Ms Claire Robertson, and, following a look at my running style on a treadmill, a consultant orthotist named Gary Gordon (I'm really not a fan of sticking things in your shoes to address bio-mechanical problems, so it should be an interesting conversation!). We discussed if I should continue running, and if so how much. We settled on a rule of no more than three 5km runs per week between now and Christmas, with a slow (10% increase per week) build up if all is OK by then. Great news that I can carry on running a little bit and won't need to drop the parkrun obsession just yet. He also advised a strap to go round my lower thigh, this pushes down hard on the IT Band, lifting it slightly on each side and therefore easing some of the friction. Not a long term solution, but it can provide improved comfort whilst resolving the condition. 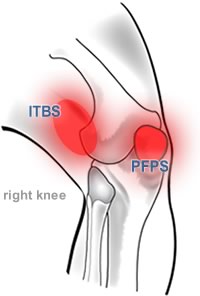 My session with Ms Robertson was well above expectation. She's a keen runner who has suffered with ITBS herself and was eager to talk about my training, races, and injury in depth. Very quickly she identified the root cause.

She had me lie on my side and raise my left leg so my foot was about 18" above my right foot, left leg straight, right bent slightly at the knee for balance. Leaning on my ankle, she told me to resist as she tried to push my legs back together. I couldn't resist at all. She was amazed, apparently I should be able to resist easily, and keep my leg rock solid. We repeated the test with my left knee half bent where I resisted well but she could still move me, and then with my knee fully bent where finally I could resist entirely. I flipped over onto my left side and we repeated the test with my right leg. I was stunned when I could hold her full weight with no effort whatsoever, it didn't feel like she was pushing at all.

This, then, is the root cause of my ITBS. I have a very large imbalance in the strength of a specific area of my gluteal muscles, with the left side demonstrably weaker. This part of the glute helps give stability through the hips as you push off with each running step. Because my hip would drop to one side it was effectively pulling excessively on the top of the IT band, and causing it to become overly tensioned and rub. The rubbing leads to heat, and the defence mechanism for unwanted heat is to bring liquid to the area, and this is the inflammation that was so clear on the ultrasound. It doesn't help that both my IT bands are really tight anyway - a possible side effect of not stretching out after exercise. 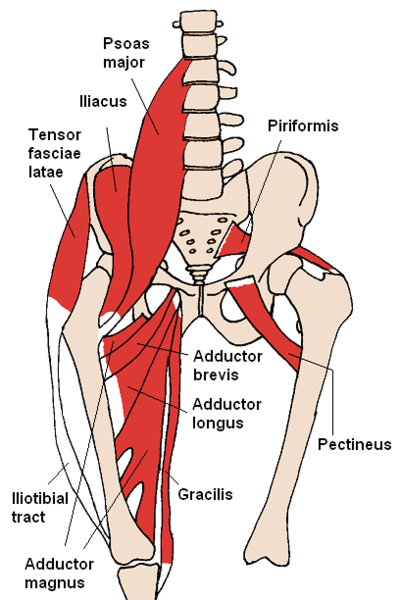 We worked out a comprehensive plan of attack - lots of little things that should help all focussing together. This was my advice, and I aim to follow it meticulously:

One: Avoid running through the pain. It's an overuse injury - there's nothing to be gained by "manning up", and it won't go away - it'll just hurt more, and take longer to recover.

Two: Ice massage after running. Use a single ice cube in a cloth applied directly to the area. You don't need a broad ice bag, it's only a specific point that needs treatment.

Three: Go and have a chat to Rob Turner - he's an expert at rehabilitation training after just this kind of injury and can advise on strength and conditioning.

Four: Go get a sports massage and get them to focus on my left IT band.

Five: Make friends with the foam roller (ouch!) starting with 3 minutes standing (applying pressure with my arms) and building up to 10 minutes of bodyweight twice per day and again before running. Not everyone agrees with this. 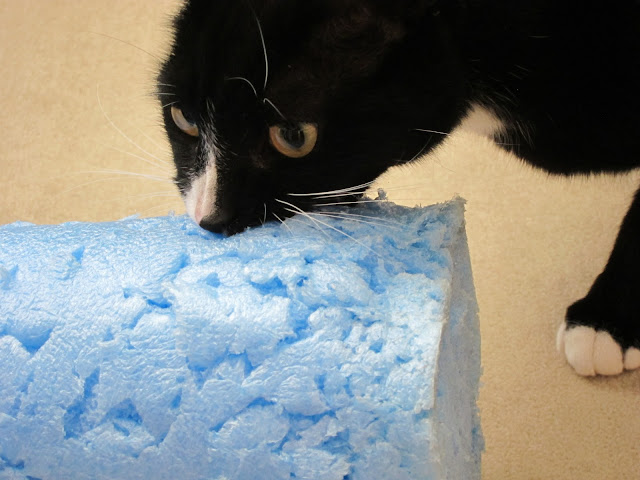 One of my cats, Dexter, demonstrating poor foam rolling technique (not for the first time)

Six: ITB stretches, 3x 20 seconds each, twice per day, and always after running. If pain comes on whilst running, can stop and stretch out like this too. 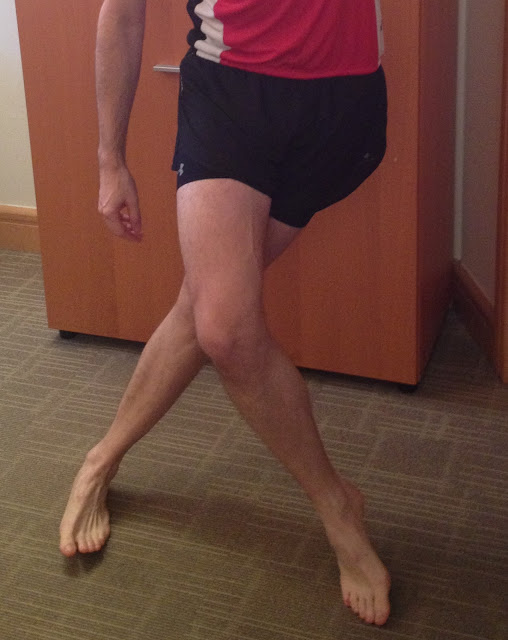 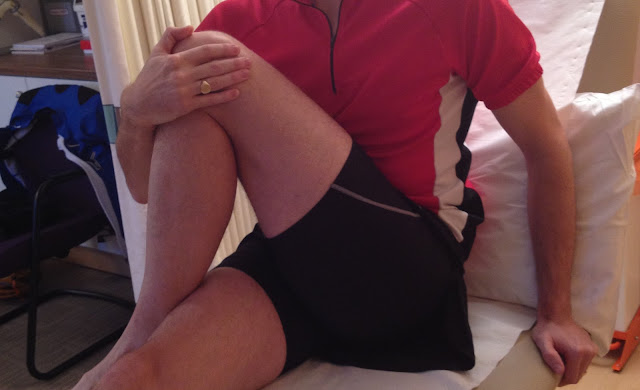 Seated stretch, when this gets easy twist from the torso to increase

Seven: Static glute exercise, left side only (need to address the imbalance), every other day. Stand on the stairs on left foot with right foot hanging over stair below, use banisters for balance. Slightly bend left knee. Drop right leg from the hip, then pull it up using the outside of the left glute. Stay aligned and don't twist. Start with 3x 12 reps, build up to 3x 20 reps. 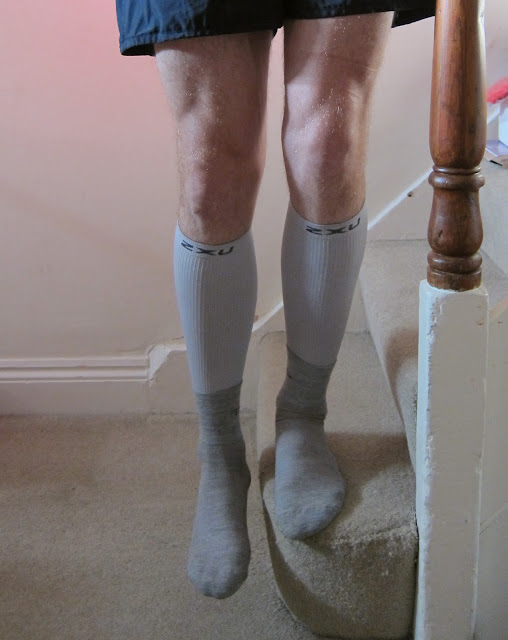 Drop the right leg, lift back up from the outside of the glute on the left

Eight: Check out aqua running. This is something my coach has mentioned on many occasions, but I've never looked into it. AquaPhysio Ltd are down the road, so I'll try them out. 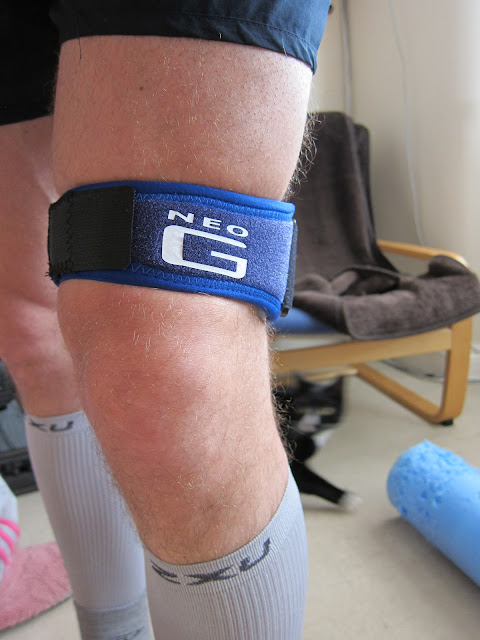