You may remember that in Ridiculous February I was planning to spend a lot more time in the pool - culminating in a 5km swim for the February Five challenge of doing something "five" related during the month of February and raising a bit of money for a good cause - Mind, the mental health charity.

Running every day, the main objective of Ridiculous February, soon put that plan over the hills and far away, but I was annoyed I hadn't done it. Annoyed was joined by guilty when onto the front door mat landed my February Five completion medal. Well I had to do it now. 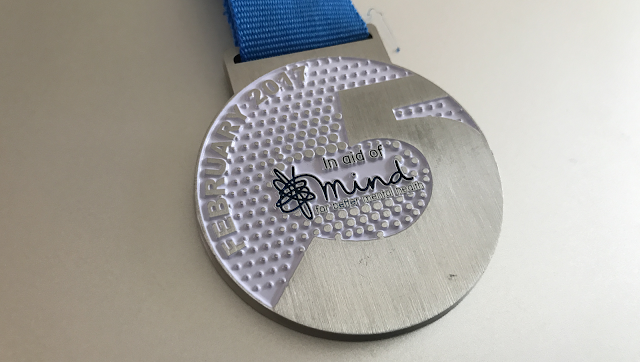 Not allowed to look at it until you've earned it

In amongst running, meetings, and various other commitments it looked like this morning was the only day that would work. So I arrived at my local pool at 7:15am (though it felt very much like 6:15am thanks to the clocks "spring forward"ing overnight).

My pool is 30m long, which is not a convenient factor of 5,000. I wasn't going to be attempting 5,000m non-stop, so had toyed with a few ways of chopping it up. I needed to swim 166.7 lengths, so I settled on 10x 16 lengths plus 1x 8 lengths to finish, with a minute break in between each set. A minute would feel like a long time at first, but I was fairly sure I'd need it at the end.

The pool was virtually empty when I started. The first few sets went by quickly and consistently. A few others arrived, but never more than one other in my lane. After the fourth set I could tell I'd slowed a little, but I wasn't too concerned - there's no time target here, just completion.

Pace drops off a little, and stroke efficiency (need more strokes per length), but no explosions!

During the seventh set I was told off by the lifeguard for circulating clockwise in an anti-clockwise lane. That's a first.

During the eighth set I saw the lifeguard and assistants making moves to re-partition the pool. I have never known a pool that continually moves lane boundaries around and sections off bits for various reasons with the frequency of this place. Sometimes you lose the whole shallow end and your lane suddenly gets 5 (or 6? or 4?) metres shorter - breaking any plan, and taking away an end to push off from.

This time they left one full length lane and partitioned various bits of the rest of it - I'd have had a minor breakdown if my 30m length suddenly changed when I was so near to the end. Though they did manage to soak my towel in the process.

With the final sets of 16 and 8 done, I was finished. During the last 16 my watch somehow gave me an extra length of credit, so my distance is logged as 5,070m rather than the 5,040m that I actually swam.

February Five done, and with it a new personal best - I've never swum 5km in one go before! I left it a bit late in the month, finally completing it on February 54th, but I got there in the end. I can now remove the medal out of its little wrapper and take a proper look, it didn't feel appropriate to do so before.

Thanks to the organisers and sponsor, Lee Merrett Wealth Management, for a different kind of motivation to get going in February (sort of) and for a good cause. Looking forward to next year already!
Posted by Norm at 10:48