I challenged myself to a big and somewhat ridiculous February - getting some miles in the tank as a good base upon which to build for the races coming later in the year (suddenly, not quite so later either...).

A reminder of the objectives:


So, how did it go? In short: boy, did I ever underestimate the impact of running slightly further every day for a month...

It started off OK (unsurprisingly, running 1km in one day is fairly straightforward), and during the first week it was trivial to hit the pool and sit on the turbo from time to time.

Week 1 - having started off getting *precisely* the right distances, the tone was set...

I had three small wobbles over the month that resulted in missing two (and a half) days of running - but the turbo and swimming dropped off quickly.

Week 2 - scene of the first wobble

The first wobble came on the 9th when my good friend Matt came round to fit some connectors he'd soldered for me - I'd been struggling for literally two years to get it done, so we went to the pub to celebrate. After 4 pints, my 9km run detonated half way through. Apparently magic-beer-energy only lasts 4km, then it's all gone. I limped back home with my tail between my legs and claimed an "amber" in Training Peaks (session not completed, but at least you gave it a shot).

Week 3 - and with no turbo and just one swim, I realised running was enough on its own

The second wobble was the 13th when, after a few days of it building, I was finally beaten by painful toothache and had to get an emergency dental appointment. No running today. Session red.

The third wobble was on the 21st, when (after being out the previous evening) I was in no condition to run! Session red.

Week 4 - emergency trip to the dentist put pay to Tuesday, but apart from that carrying on well

As I started getting into the teens, it got harder to do anything else - the fatigue was building up and it was all I could do to complete the distance the next day, without cycling or swimming too. On the plus side, I didn't miss any more days, and finished strongly on the 28th.

Week 5 - the last couple of days, getting out the door on the 28th was a challenge

As for races - no chance - I simply didn't feel like it. I didn't want to go out, tired, only to tire myself even more for the next day.

Swimming and biking started well, but as noted dropped off fairly quickly. Needless to say, I failed to take on the February Five challenge I'd set myself of swimming 5km (where do I get the idea I can do all this stuff at once?). This puts me in a bit of a quandary as the organiser had already sent me the medal. I'm going to give it a shot tomorrow morning, and hope nobody notices I didn't do it in February! If I don't make it, I'll have to leave the medal in its sealed bag until next year. 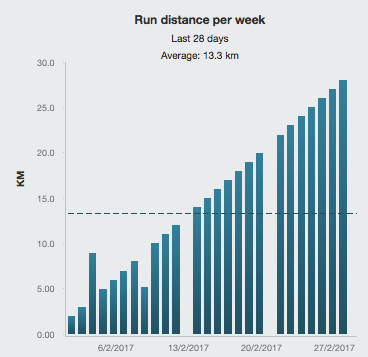 If I'd known I was going to get such a pretty graph I'd have tried harder...

In summary, I'll give myself a grade B for the running challenge as despite missing a couple of sessions I am still particularly pleased to have completed all the longer days; and a grade D for everything else - a good start, but bitten off more than I could chew.

I've been wanting to try the ramping-up month for a while, I'm looking forward to a future second attempt.
Posted by Norm at 15:24