The day before race day

So, the day is upon us (or at least it will be tomorrow). I've been quite nervous about this race, it's going to be tough. I fully expect it to be the hardest race I've ever tried. Not helped by training not being as good as it should have been (is it ever?), a compulsion to eat and drink inappropriate foods meaning I'm heavier than I want to be, and my head not playing nicely (more on that somewhere else at some other time).

BUT - I've never gone into a race not planning to finish, and this one is no different - so let's zip up the positivity vest and get on with it.

Tomorrow, it will get dark at around 4:30pm - I know my pace will drop off then. I'm not confident in the dark, and I haven't trained in the dark with my head torch. Race start is 8am, so that's eight and a half hours of light - I need to use them well. The laps are 10 miles, and in training they've taken an average of around two and a quarter hours. Race day will be a little slower, but I should still be able to get three laps done in the light - an average of two hours and fifty minutes per lap.

That leaves two full laps in the dark. On the plus side I've run four or five laps in training, on the actual course, so I know it well. Its twisty and complicated, but I can run it from memory now with no problem. Getting lost shouldn't be an issue (plus Centurion course marking is outstanding).

Race cut off isn't until midnight so that leaves a further seven and a half hours to complete the final two laps - which is plenty of time. Providing I can still get up the hills! There's around 600m of ascent on each lap, so 3km of height gained over the whole course - more than I've done in a day before, even hiking in the Lake District. But - providing my knees don't explode - it's achievable.

Cool, not windy, and clear once the fog lifts - good running weather

The weather looks good. Mrs is on her way up on a train right now to support me tomorrow and help out at the mid-point aid station. And I've packed something for breakfast in the morning (to avoid having to chew on an old piece of steak like at the Chiltern Wonderland 50).

Now, it's time for dinner, and to relax a bit. I reckon it's going to be a good day.

Up at 5:55 for customary pre-race coffee to kick start the morning biology, and out into chilly but manageable darkness for the short drive to the start. Race start is at the trig point which marks the highest point in the Chilterns. The fog heavy in the field - and it was much colder. I ran to the race tent to register, kit check, and pick up my number, then ran back to the car to hide in the warm and eat breakfast.

It took a while for the masses to get over a single narrow style from race HQ through to the start on the road so James had to give a high speed briefing which ended with "...and we're starting in 10 seconds" - no time to worry, off we go!

The field strung out very quickly and I was able to find some space to run in. I'm not a chatty runner, so I settled into back to back omnibus episodes of The Archers and it's fan-made companion Dum Tee Dum (my guilty podcast pleasures).

I'm not going to describe the course here - I covered it in depth in my course recce.

Laps one and two went past well and without incident. Knowing the course well was such a psychological advantage, when to enjoy a down, how long the ups are, and splitting the course into a few segments to tick off as I went round. I was astonished to get lapped as I left the mid-point aid station on lap 2, I'd just past 15 miles and the front runners were 10 miles ahead! On a point to point race you don't get that experience - the fast people just disappear off into the distance and that's it. I was pleased to support them with some "good running!" calls of support as they shot past.

Hot cups of tea at the start/finish and mid-point aid stations were welcome, as were the couple of slices of cheese I took each time. Mrs was helping out abradypus and crew at the mid-point, so that gave me something to look forward to on each lap too - and gave a bit more impetus to set out on the next lap from the enticing camping chairs at the start/finish (never sit on the chairs at aid stations!).

I was starting to feel fatigued during lap 3, but was still jogging along well. I could tell I was slowing, but not too much. I viewed lap 3 as "lap 3 of 5" which sounds like great progress (rather than "just coming up to" or "just after" half way). This running stuff is all mind games.

It wasn't until almost half way through lap 4, coming up to 35 miles, that it got dark enough to need the head torch. I was very pleased to have got this far round - half a lap up on my plan. I slowed quite a lot in the dark, particularly on the rooty sections. 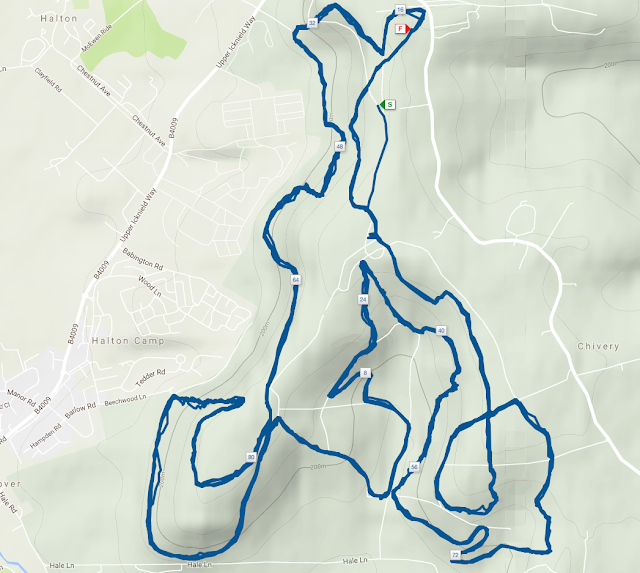 As I set out on the 5th and final lap in the now pitch darkness I was starting to feel the fatigue. My knees were feeling the pressure of so much climbing and descending, and running was getting increasingly hard. I wasn't surprised, exactly there same thing happened at Chiltern Wonderland, and I marched/hiked as fast as I could for the last 10km or so and was prepared to do the same here. The change of stride and feeling of being on the home stretch gave me a mental lift, and I marched my way forward, only losing a couple of places and actually overtaking a couple of people too. Learning point: If you're going to walk, walk as fast as you can - it's part of the race, it's not giving up.

99th place finish in just under 13 and a half hours

Quite promisingly, I was gaining places throughout - from 138th after the first lap, to 124th after the second, then 110th, 97th, and finally holding for 99th. My laps had inevitably slowed down, but it could have been a lot worse - particularly when tired and in the dark.

Eventually, it was over, and I picked up my second Centurion 50 mile medal. Quite a few personal records fell today - the longest single run I've ever done in distance and in duration, and the most ascent I've gained on any single day. I've said it elsewhere, but I love that "at my age" I can still set lifetime best performances. I'm, once again, in awe of Mrs who covered twice this distance at the North Downs Way 100 earlier in the year.

What a wonderful sport this is!
SaveSave
Posted by Norm at 11:14