Whilst relaxing in Seville, Louise mentioned that she was running a double marathon on an upcoming weekend (bonkers), and really fancied The Moyleman, a hilly trail marathon, the week after. She was looking for someone to enter the relay with, and I liked the sound of the race so happily offered. Mrs liked the look of it too, and entered the full distance.

I hadn't heard of The Moyleman before. It's only in its second year, and Louise found out about it via a conversation with the race director who she bumped into at the new Bevendean parkrun in Brighton. It's a relatively small event with a great team/community feel, entries were limited to around 100 soloists and 25 teams of two.

Registration was in a school, with all entrants registering together. Bag drop was available for those running leg one of the relay. Half way was easy to get to by train from Lewes. My plan was to cheer off Mrs, then Louise, and then hop on the train for changeover. 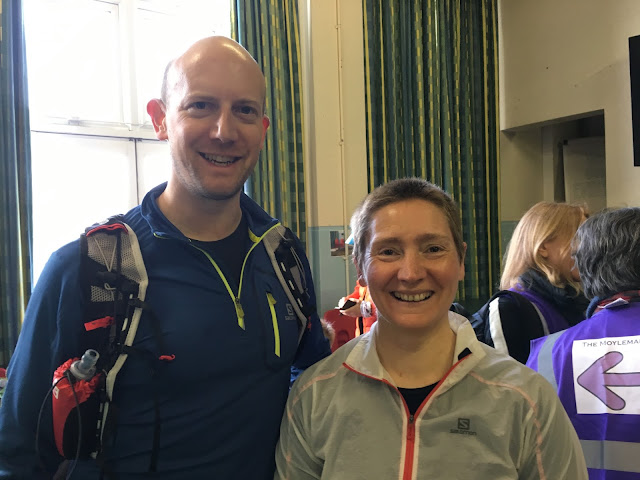 Our team name was "chasing Kate" as Louise expected her to be in front by half way, then I could spend the second half chasing her down! 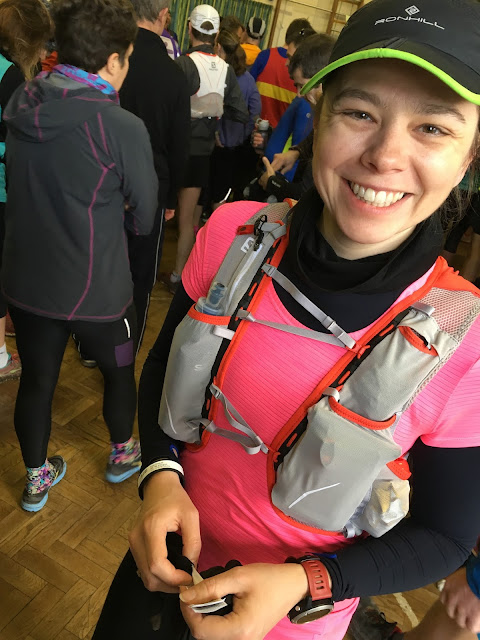 There was a five minute walk to the starting area, we all walked up together. 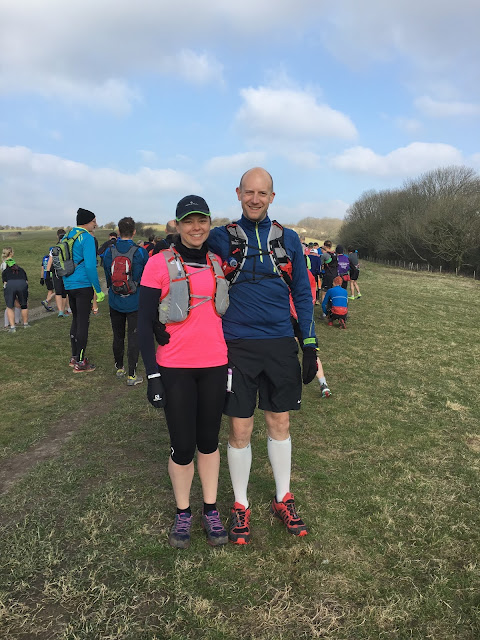 Numbers on, bags packed, see you out there somewhere!

The full distance entrants were first to go off. The weather was perfect for running - cool, clear and bright, and not too muddy. Visibility was excellent, I was regretting not bringing my sunglasses.

We'd struck up conversation with another relay team, Peter and Judi, and Peter had offered to drive me to the half-way point. Perfect, thanks Pete! This meant that once the relay runners had set off we could go and spectate. 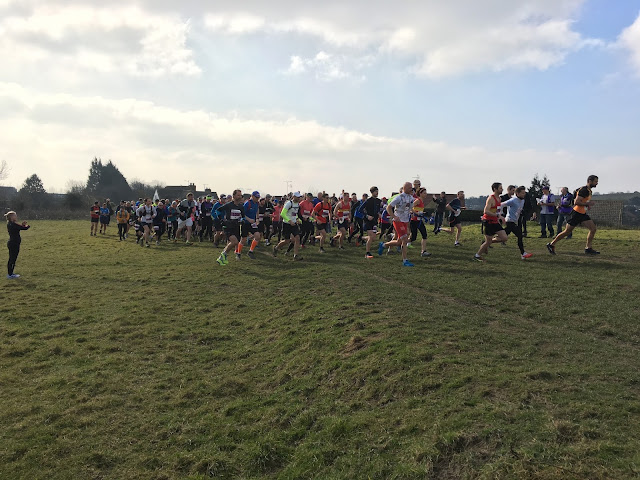 The full-distance entrants are off!

The leg one runners from the relay teams went off in a smaller group 15 minutes later. 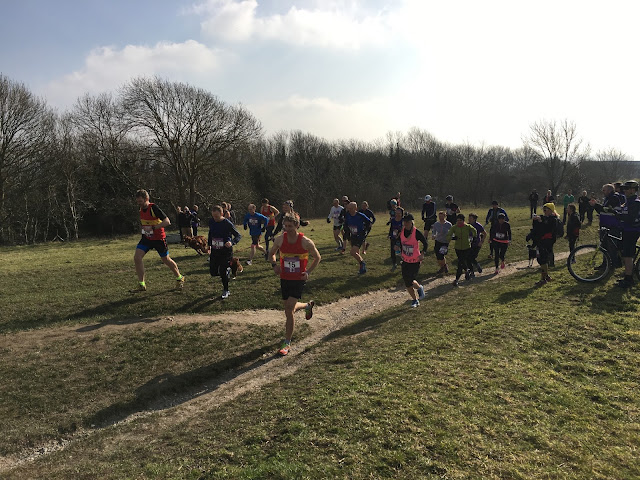 Leg one relay runners are off!

We cheered our relay partners, then headed off to one of the aid stations to watch the runners go by. By the time we got there the front runner from the marathon was already coming through - he was really flying. Quickly followed by second and third places, then a gap to fourth.

We parked up and cheered the full field as they ran through, including Mrs, and our relay partners. 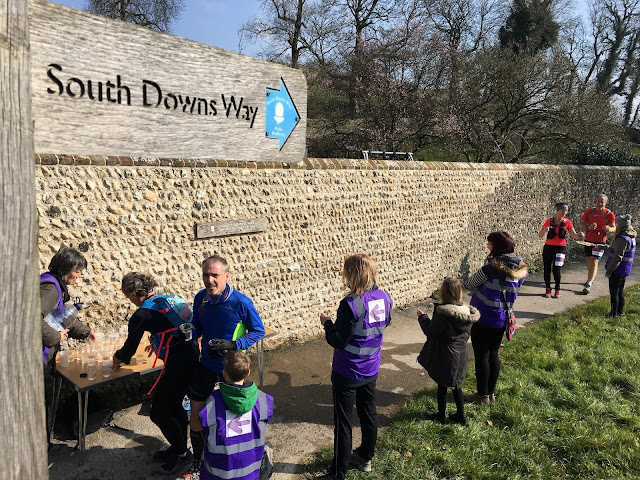 Much of the route was on the South Downs Way, very well signposted

Mrs looked good as she went by but was complaining about her stomach. Louise came through about ten minutes later, so had already made up five minutes in the first six miles or so. I hoped she would be OK, it can often takes her a long time to warm up and settle into it. 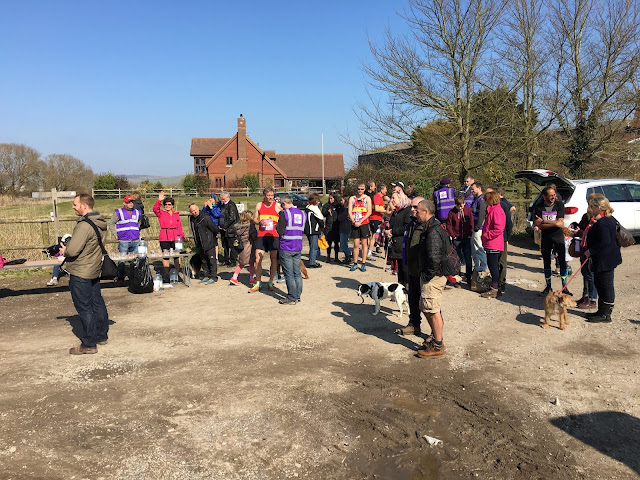 The mid-way point and aid station and relay change over

I was ready to go, I'd even warmed up a bit! Louise came in with a strong finish, we quickly swapped the purple wristband over, and I was off! I ran hard for the first ten to twenty metres before rounding a corner straight into a monumental hill. I knew this was a hilly route, but I didn't expect to need breathing apparatus!

I immediately dropped to a fast-paced hike and went up, and up.. and up... About half way up, Pete overtook me. Louise had beaten his relay partner in leg one, but he was far more experienced and faster (fitter) than me.

Once I'd reached the transmission towers on the ridge of the South Downs, it levelled out and I began to run again. I'd gone too hard without being warmed up properly and was struggling with my breathing, it was very windy up top and my asthma was not being helpful.

Once I'd settled in a bit I was running well and making a good pace. I overtook lots of very tired looking runners, they were running the full thing and I'd only just started - I felt the need to encourage and explain to most of them so they weren't disheartened!

After a few km up on the ridge there was an incredibly steep downhill, and then blissfully out of the wind and being cooked by the sun - it really was a perfect day for running. 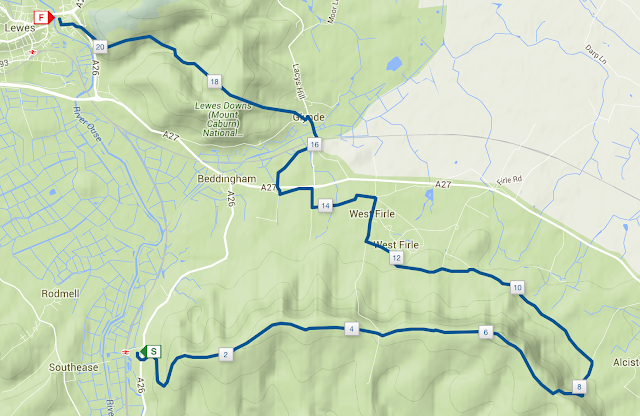 The signage was outstanding. At no point was I at all concerned about route finding - there were big purple arrows everywhere it was possible to go wrong, and in many places where it wasn't just to keep you confident. There must have been at least a dozen marshals out on the course too, cheering, holding open gates, and pointing the runners in the right direction.

There were two steep climbs in quick succession to finish and then a fast run down into Lewes for the finish.

I loved this run, I really enjoyed it. I ran hard and finished strong - maybe I'm better suited to trail races? I finished with an official time of 2:12:57 which gave us a total of 4:34:25 - a none too shabby 11th placed relay team out of 20 finishing pairs. 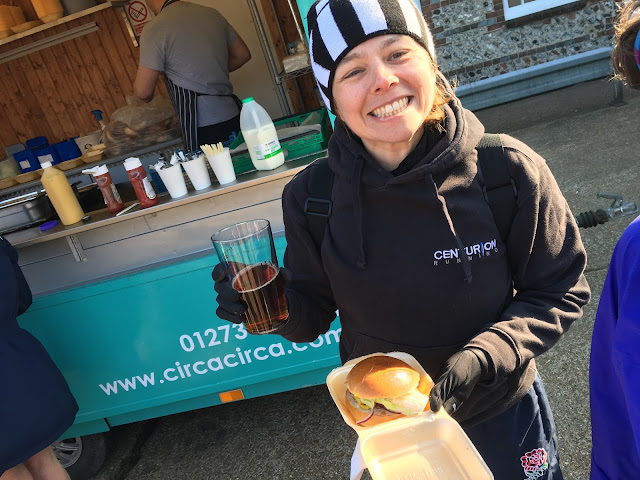 Mrs was happy at the end, having decided to stop at the mid-point after continuing to feel off colour

Rather than a medal, the prize was a free burger and a commemorative pint glass (which they kindly fill with beer).

This was a great race - exceptionally well organised, a fantastically well signposted course, and really good friendly feel. I'm seriously considering coming back and running the full route next year.

We decided to retire to the local pub for a well-earned pint before heading back home (with many thanks to Louise for driving us there and back). 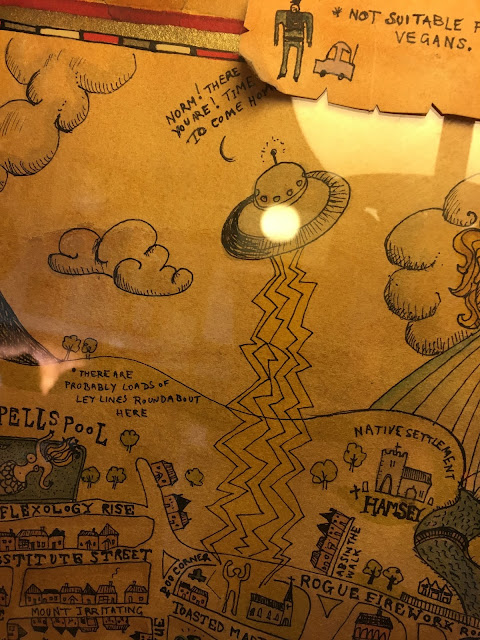 I'm an alien, beam me up

There was a very odd picture on the wall of Lewes with all sorts of in-jokes for the locals, including an alien called Norm who was being beamed back to his saucer to go home. 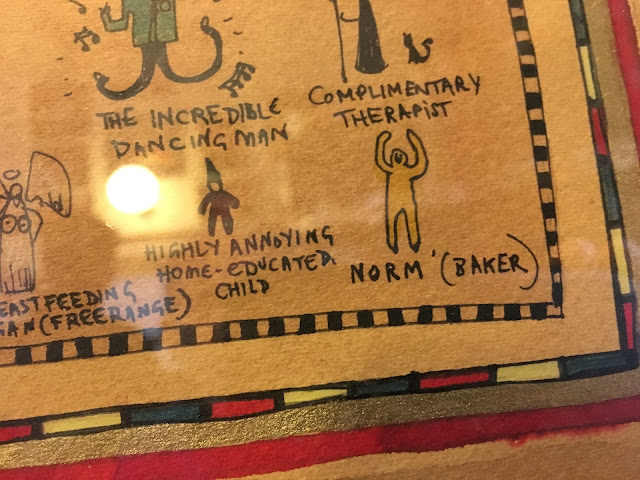 I wonder what I'been up to during my stay on planet Earth?
Posted by Norm at 15:02