A little harder to get going this morning as I was fast asleep when my alarm went off. Soon perked up though, with a portion of lovely Bulletproof Coffee and the surprise of being a whole kilogram lighter than yesterday. It's impossible to lose weight from fat at this rate, indeed the maximum advised rate is about 1kg (2.2lb) per week, so clearly I was releasing some retained fluid or have further depleted my glycogen store. My full glycogen stores will weigh around 1kg (varies according to weight and other factors), but there's water you lose at the same time.

If you adopt the Atkins diet which is similar in profile to what I'm doing, rapid weight loss during the adaptation phase is one known effect. This invariable leads to cries from the dieter of "Yay! It's working! I lost 10lb in 2 weeks on the Atkins diet!" - in fact as shown on their website that's one of the primary selling points.

This rate of loss is, of course, unsustainable. You only have a certain amount of glycogen and fluid to lose (though there will be some fat loss too during this period), and once that's gone the diet "fails" (rate of loss becomes comes much reduced) and the yo-yo dieter goes back to their normal dietary habits, and "piles the weight back on" (restocks glycogen, fluids, and probably some fat too). They haven't waited long enough to properly adapt.

I'm not aiming for rapid weight loss, I want some amount of controlled loss but the priority is metabolic change. I feel It's important for me to maintain a strong and regular exercise ethic during this process. I'm trying not to be in a high calorie deficit during this phase (though I am taking in fewer calories than I have been in recent weeks). 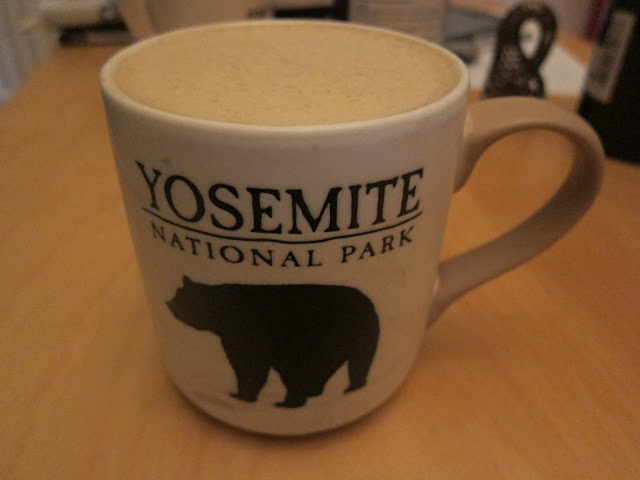 I was very hungry this morning - but it's hard to tell if it's genuine. I had a yoghurt snack at 09:30, and bacon and egg with some cherry tomatoes at 10:45. Quite different to yesterday where I wasn't at all hungry until lunch time.

In the evening, we had our first attempt at having a meal out, going to one of our favourite local places, the Light House in Wimbledon. It is possible, but some self control, and careful choosing of menu items is required. 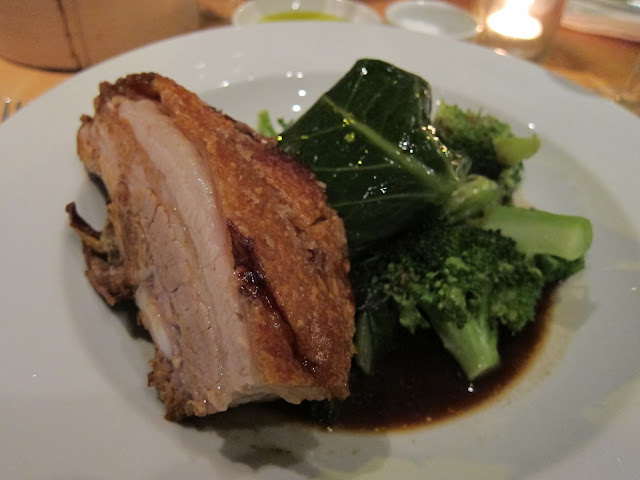 Pork Belly with crackling, hold the mash, add broccoli and spinach side dish

If your starter comes with toast, like my chicken liver pâté did, hide it in the bread (which you, of course, aren't eating). 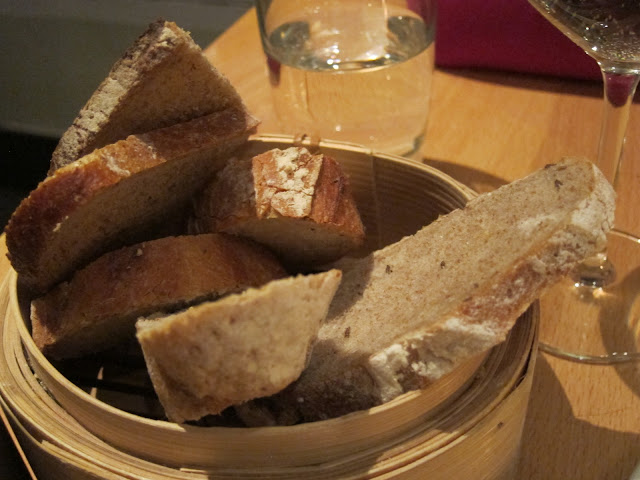 Toast in the bread, obviously

Weirdest. Hangover. Ever. Awoke with a banging headache and expected a day of sluggishness and a feeling of guilt for not being able to focus on my work tasks properly (standard hangover modus operandi)  - but the headache cleared in minutes after I got up and downed a bulletproof coffee. I did feel a bit tired (probably as a result of poor quality sleep), but not energy-crashingly so like I would expect to be. I ate on-plan through the day and didn't experience the usual hangover carb-cravings in the slightest (I need toast! And a bacon and egg roll! And a lardy lunch! And a Snickers!).

I was scheduled for a long and serious meeting in the afternoon. Conventionally, this is where I'd have had a big slump and really struggled to stay attentive, the 1pm to 3pm danger zone (probably as a result of a massive slump following an insulin spike resulting from a carb-laden lunch) - but this simply didn't happen. I felt alert and focussed the whole way through - I have done for the whole day, in fact. I fully approve of this experience!

In the evening I had a run scheduled - "Run until it hurts" the Doctor said (more on my knee later). First time running on this plan and only my third run in a fortnight so I was a bit creaky but felt pretty good. I wasn't going very fast, just under 25 minutes for 5km, but my energy levels seemed to be normal. I'm starting to feel a bit weird, like I'm hardly eating any carbs, but I'm not getting tired or being unable to do physical things - where is this energy coming from? Am I metabolising fat already? I did feel a little weak towards the end but that might be as a result of my knee starting to hurt. I'm looking forward to an experimental long run at some point soon.

My weight continues to evaporate - I was 81.8kg this morning (actually 81.75kg but I always round up), much closer to the "around 80kg" that I'd be happy with. As previously explained, this isn't a weight-loss initiative, but it's a perfectly acceptable side effect! When I started day 1 last Saturday I weighed in at 84.3kg.

I've been feeling more and more alert as the week has progressed. I'm finding it hard to believe that i'm getting through almost the entire morning, including a cycle commute of a reasonable intensity (mid-to upper HR zone 1), with nothing other than a cup of coffee (all be it a 376 calorie one with 41.2g of fat in it).

I'm starting to wonder if my dropping ability to really focus and make good progress on things at work in recent months was as a result of diet? Could it be that simple? I had got well into the habit of having two breakfasts in the morning. This was as a result of a normally fairly heavy morning training load, but as the training load dropped off at the end of the season my breakfasts didn't - quite the opposite. Recently I'd been having peanut butter in porridge in the morning, and then cereal and a banana when I got in - even on the days when I got the tube in. That's clearly excessive.

I'm continuing to feel more alert, more mentally agile, and more focussed and constructive. How much of this is genuine versus psychosomatic? I'm thinking a large percentage is for real. I hadn't read or heard anywhere about a change of mental state and therefore wasn't looking for it.

Mrs mentioned this evening that she'd seen a few articles about the effect of a high fat/low carbohydrate diet on the brain, so I'm definitely going to take a look at that - I'll let you know what I find!
Posted by Norm at 22:00