Spectating at the GE Blenheim Triathlon

As a result of going a bit off the rails training-plan wise over last week I made the decision not to race the picturesque GE Blenheim Triathlon. Mrs, however, didn't get off the hook so easily, so she was still up early with her race face on and ready to go for some sprint-distance action.

My rearranged diary called for a low-effort Heart Rate Zone 1 session instead, so I got up early and had a 50km ride in the sun (and persistent wind) up to Richmond Park, round it a few times in each direction, and on to the inaugural parkrun event at Crane Park, a few miles west of Richmond in South West London. I was scheduled to run at my anticipated Ironman marathon pace, so I jogged round at the wide end (if the front of the pack is the sharp/pointy end, then the back has to be the wide end, right?) in a relatively pedestrian 27:19.

I was due to complete a section of the ride at 25-mile Time Trial pace so I saved that for the journey back home - a solid 43 minute effort. I got in at 10:25 - a little later than intended, I'd said we should leave at 10:30, but Mrs was all packed and ready and we were back out within 15 minutes.

She was having a tough work day and spent the drive up to Blenheim Palace on the phone - a very stressy period and, together with getting stuck on the Oxford ring road, not the best pre-race experience.

In my role as domestique for the day I parked up, unpacked the car, and assembled the bike. I carried bags and wheeled the bike to registration while Mrs carried on dealing with work. Thankfully for all our sanity the phone reception in the area is atrocious and she soon had to drop off the phone and could focus on her race.

Despite the delays, we had plenty of time to rack up in transition and get ready. I had planned to race and therefore received my race pack, so I brought my athlete's wristband and enjoyed "access all areas" - I could get into transition, help Mrs while she got changed into her wetsuit, and carry all her bags. I tried to do as I was told and be quiet and helpful. Today, I'm just a spectator. 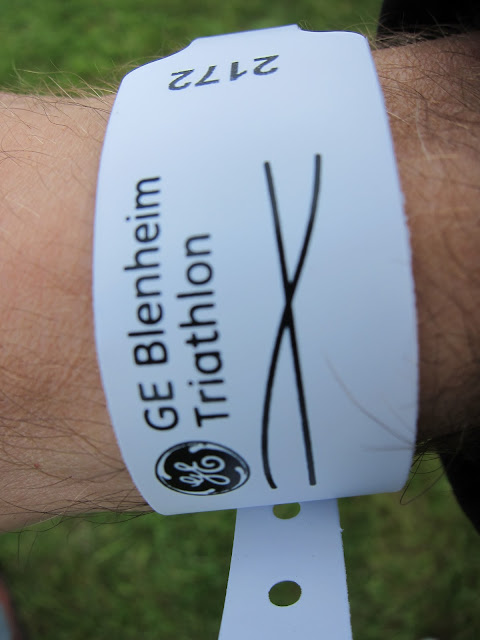 Mrs went down to swim start, I went to grab a coffee and head down to watch. The green-hats assembled, and had the usual good natured briefing. The same guy did the briefing at last year's Blenheim Triathlon (which I didn't enjoy very much - over-cooked the bike and suffered badly on the run), and also the Virgin London Triathlon. 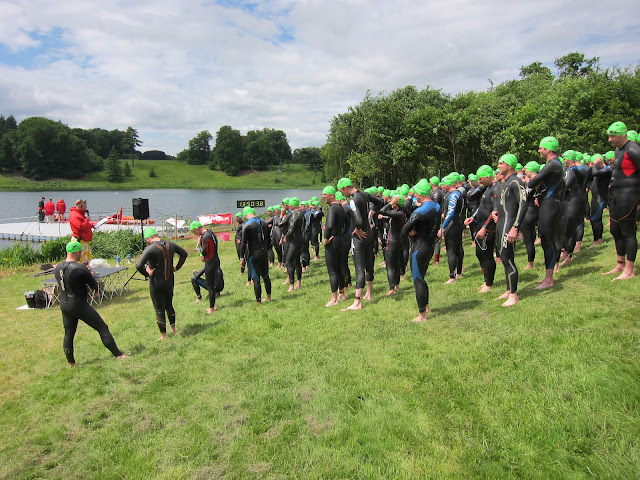 Without further ado, they dropped in the water and were off! 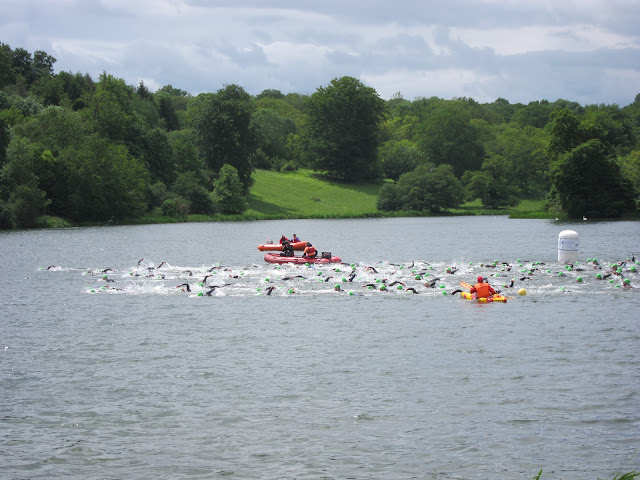 I cheered and waved along with all the other proud Mums and Dads and Significant Others, and wandered back up the hill to wait at the top of the swim exit. There's a punishing 400m hill straight out of the water and on to T1 - I wanted to see where she was in the order and cheer her on where I knew I could be heard. Out of her wave of what I guess was 150-200, she was in the top 15, and 5th woman - I beamed proudly and shouted "5th woman!" as she went by. 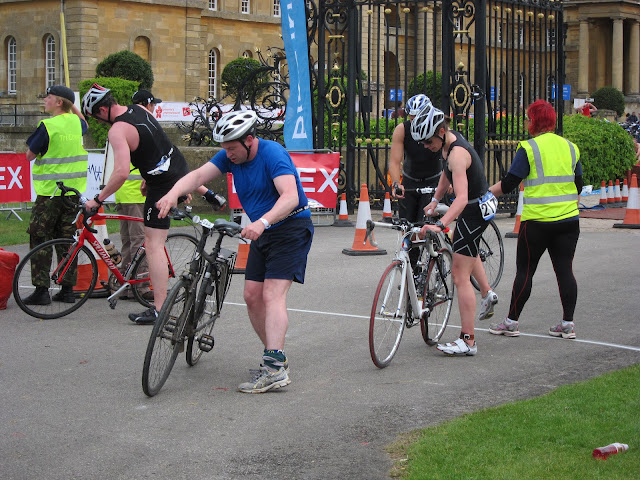 Mrs at the bike mount (with the red tyres, before you say something funny about the guy in blue)

No time to get to transition, so I went to watch the bike mount. I saw her leave on the first of three laps, and then pass twice more. I yelled encouragement each time and think I got through (either that or they guy next to her was wondering why I was yelling "Go-on honey, looking good!" at him). 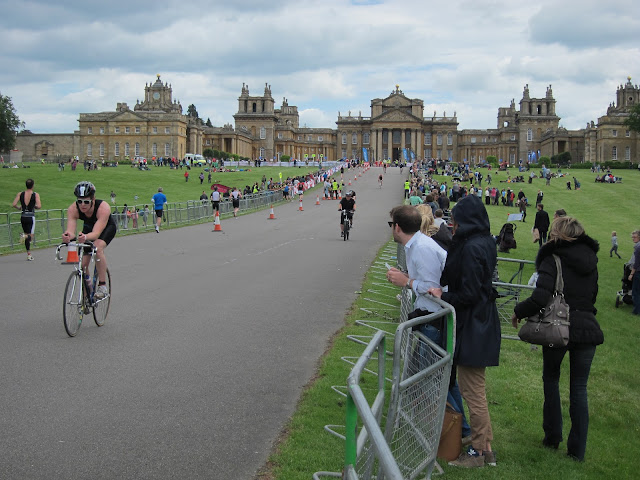 Looking up to transition - it really is a beautiful setting 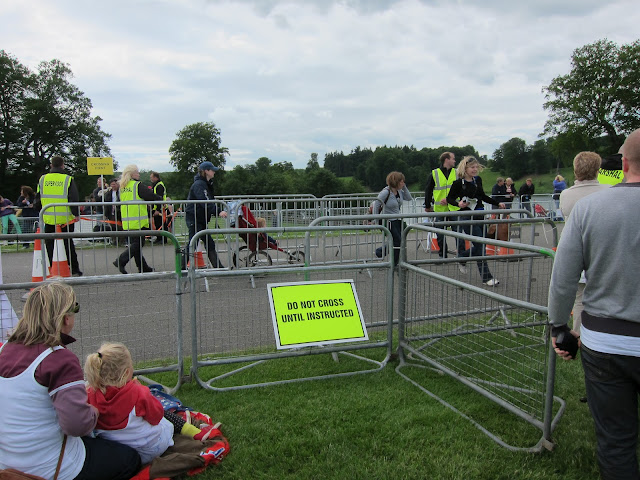 I crossed the bike and run route (eventually, there was quite a queue) to get closer to the runners. Mrs went in for T2 and out not he run. 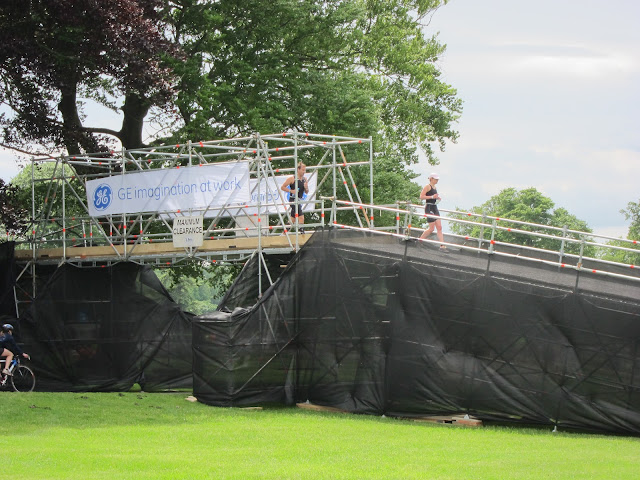 Mrs heading down the ramp on the bridge to the run route, 200m outside transition

I yelled some more encouragement and made my way up to the finish. She was looking really strong in the run (as I yelled a couple of times) and even raised her arms and laughed as the announcer called her name as she went down the finishing chute. I was so happy I forgot to get a picture of her, but she looked strong, fast, and fit - looking good for next week's Ironman 70.3 UK at Wimbleball!

A quick look at the results show her to be in 9th place overall in her age category - an amazing performance out of over 180 in her category over the two days of racing.

It was a good experience being on the other side for a change, as a spectator rather than competitor - cheering along with everyone else and enjoying the spectacle. If you get a chance to go along and support someone at a triathlon, please do - it means the world to have support and you may feel tempted to try it yourself.

Race report from Mrs is here.

The elites raced on Saturday morning and were all done by the time we got there - Alistair Brownlee made a triumphant return to racing finishing in a tie with his brother Jonathon, and Jodie Stimpson took it out for the ladies, right in the face of the announcement of the GBR team by the Olympic selection committee. The selection was a messy process, and resulted in some rather public disappointment by the unselected.
Posted by Norm at 11:36