The On Your Marks Events Stowe Olympic Triathlon is another of the important "preparing for Ironman" races that Mrs and I have had on the calendar since last year. We wanted to do at least one sprint and one olympic before the first half IM. 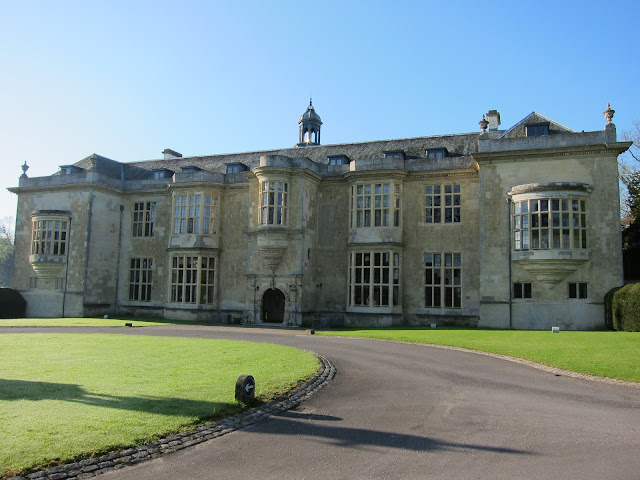 We've been hard at it, working and training, so I decided to get us a nice place to stay near the race for Saturday night. Hartwell House Hotel was a beautiful building with a quirky interior. We had tea and scones in the afternoon (more lard-loading than carb-loading), and then dined on over-priced steak. The TV in the room had a stand-by light so bright we cast a shadow on the headboard. I stuck a piece of card over it. The night-porter misread my breakfast instructions, so we got forgotten about in the morning; and on checkout the receptionist was quite short with Mrs. I hope our visit was atypical, but I wouldn't recommend it. 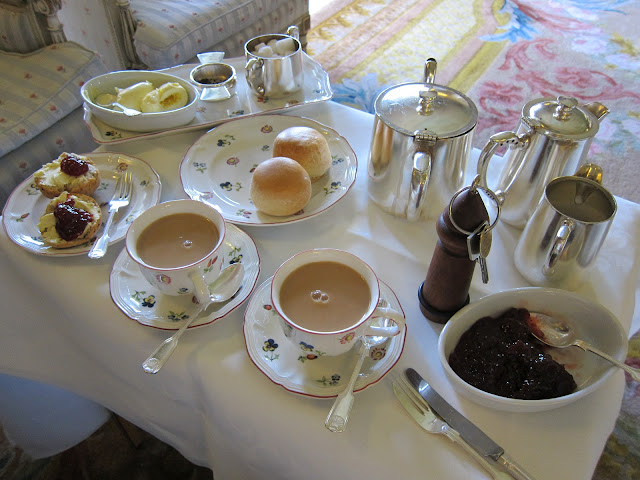 We got to Stowe in good time to get ready. This weekend was all about the country houses. Registration was in "The Marble Room", and transition was set up out front. We racked up, and headed on the long walk down to the lake. 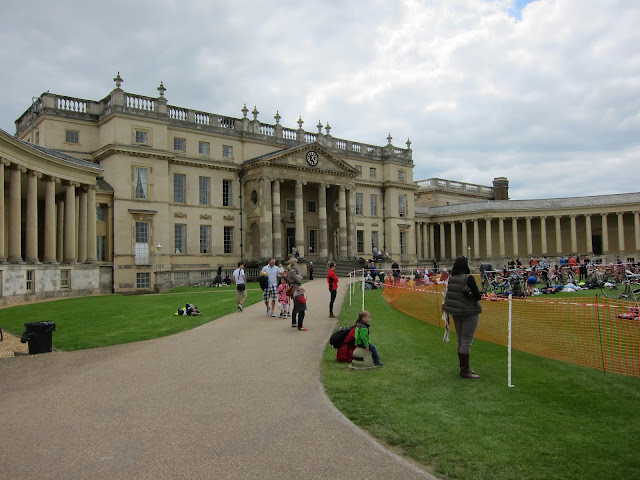 Transition outside the main entrance 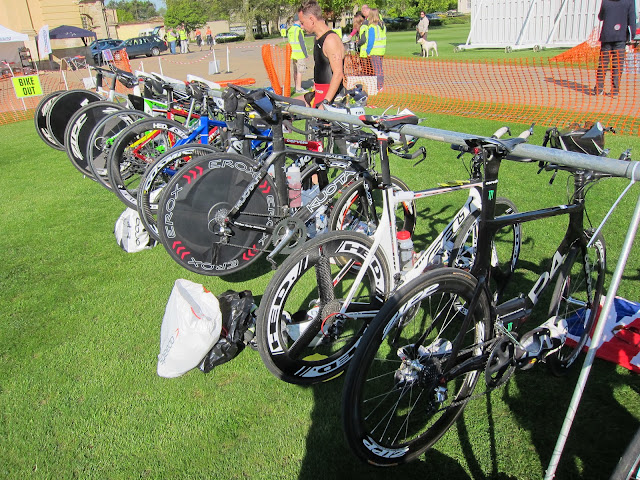 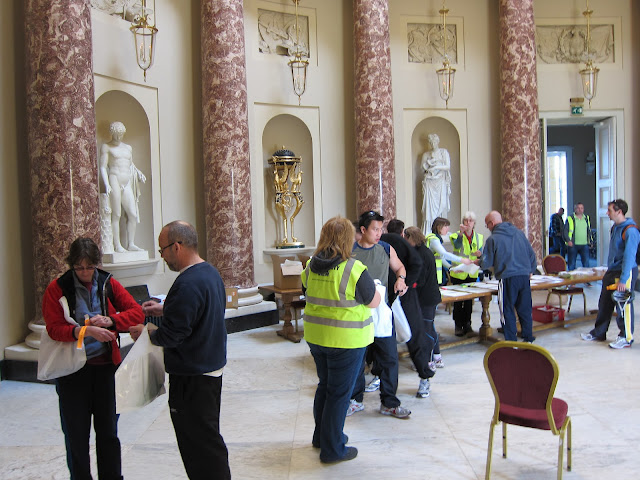 Registration in "The Marble Room"

For once, we were allowed in the water a good period of time before the swim, so I warmed up for about 10 minutes. When we set off I had my usual 5 minutes of panic - however I learned what triggers it. It seems to be as soon as I get the cold water in my nose. I immediately fight for breath, lift my head out of the water, and lose all form or pace for about 5 minutes. I'll need to work on that. 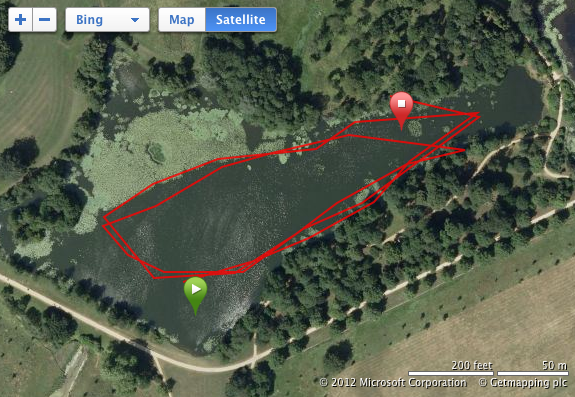 I started at the front but everyone swam away from me. After 5 minutes or so I started getting control back, and began to swim more strongly. My form improved over the next 15 minutes and I reeled in the second group and swam right through them, to exit in between the front and second groups. I think my swim could be good, but I need to fix the start. It's happened in every single open water event do far.

A "feature" of this course is the 800m run from Swim Exit to T1. My HR went through the roof to start with, and running up was hard. I thought the run was supposed to be at the end? 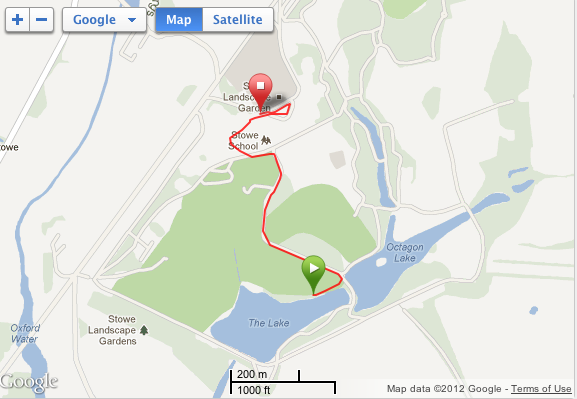 T1 was uneventful, and I set out on the bike course. It was a rolling course, one or two hills that needed the small ring - glad I fitted my front derailleur on Friday night (it worked perfectly). I reeled in a couple of fast-swim slow-bike competitors quickly, and picked off 3 or 4 more round the course. It was fairly quick - I could have gone faster if I'd have been more familiar with the corners. This shows the value of good reconnaissance. A few bits of blustery wind as we went through Silverstone, but other than that it was a solitary and uneventful ride in the sun. I made a last minute decision to tape a couple of gels to my top tube. The tape held the tab firmly so I could pull the gel off and open it at the same time. Despite the worthwhile principle of "never trying anything new in a race" (or "TEST IT", Try Everything Several Times In Training), it worked perfectly. Not going to make a habit of this behaviour though.

T2 was quick, well under a minute, and out on the run. My aim for the day was to feel strong in the run. In the two olympic distance triathlons I've completed before I've suffered from some discomfort due to trapped wind (I suspect from taking in air into my gut on the swim), and general knackeredness. I set off relatively well clocking in at about 5 minutes per kilometre - that was around my target pace. However the course was very twisty with lots of 90-degree turns and some even more acute. The terrain was uneven and there were many ups and downs. For a great 5-10 minutes I had a few guys running along with me who had caught my on the run but couldn't find the pace to break past - it felt like a real race! They soon overtook me though and disappeared. I felt like I was putting in a better run than I have before though - I didn't have the usual stream of guys running past me like I was stood still. I found it hard going at the end, but overall I'm pleased. I held in or around 5min/km all the way through, didn't have any internal distresses, and managed a fast-jog finish if not quite a sprint. 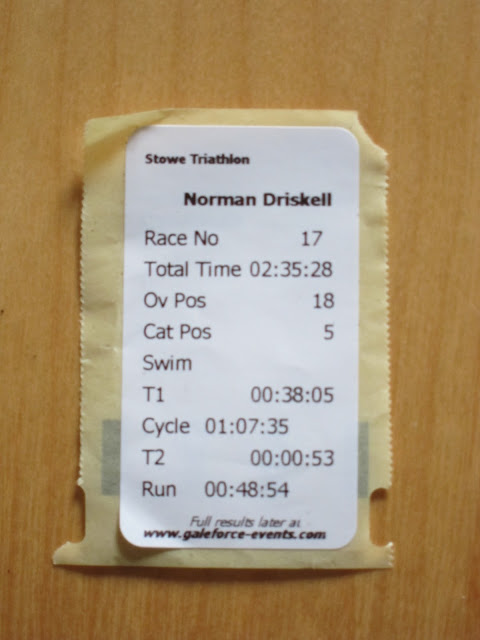 My provisional timings - positions are in my start wave, not over all competitors 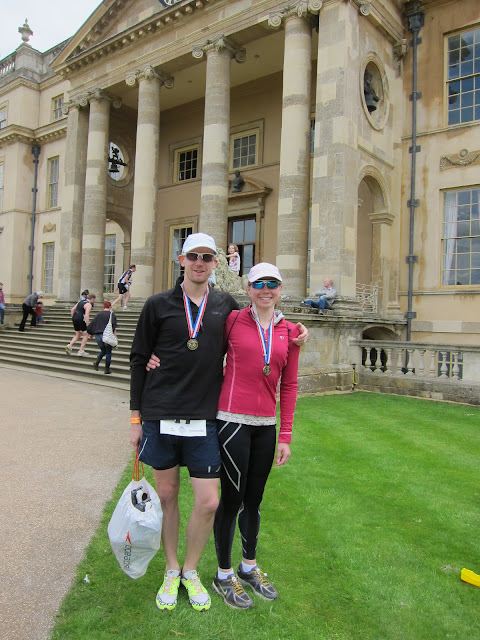 Me'n'Mrs with our generic SwimBikeRun medals 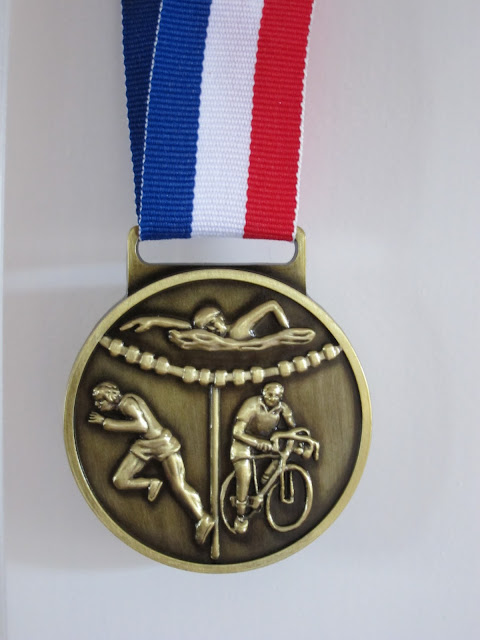 Generic SwimBikeRun medal - event name or date would have been nice

All things considered, this was a good day out. My time was about 10 minutes faster than I thought it was going to be, and it was good pre-Wimbleball experience to race on a course that actually had some hills in it - particularly the run. I winged it a bit on equipment and preparedness, but won't be taking those risks again, particularly for the long-course events.

Drove home via some M40 services for Cheese and Marmite sandwich, Cheesecake, and "Grande Skinny Caramel Macchiato" (Mrs recommended it, I'm not sure I know what any of those words mean) and it was a lovely refuelling experience. Got home and ate Pizza. Yum.
Posted by Norm at 21:48