The first event on the 2012 race calendar

Tomorrow is the first event of the year, "Hell of the Ashdown" organised by Catford Cycling Club. A choice of 55km or 110km sportive in and around the Ashdown forest (in, around, and crucially up and down). It's all about the hills.

For the revised 2012 route there are 8 major climbs on the 110km route. Taken from their website:
I'm excited about this event. It's the first "proper" event since I've started the Ironman training. I definitely feel fitter and faster, and so I'm intrigued to see what difference that makes on the clock.

I've entered the 110km route in the last two years. It used to be held on the last Sunday in January to make it a real winter test, but the bitterly cold and icy days they had in 2009 and 2010 meant that from 2011 it was moved to the last Sunday in February. I can definitely agree that 2010 was a true winter day of near Arctic proportions!

In 2010 I had my only real experience of "bonking" (the cycling equivalent of "hitting the wall") - I ran completely dry - it was one of the most horrible experiences I've ever had. I couldn't get up any hills (even a slight rise) and was so weak that I couldn't keep the bike going in a straight line on the down hills. This kicked in after about 5 hours in the saddle. I sat in a car park by the side of the road and gave up. Tried to call Mrs (or Miss, as she was then), but there was no reception. I felt sorry for myself for a while and realised that if I didn't get my arse into gear I was going to be stuck in the car park for the rest of my life.

After hauling myself up, I was amazed to find the next feed station literally (and I mean literally) around the next corner. I stocked up on hot sweet coffee and the wonder that is Mule Bar, and rode the final hour to the finish. I learned a lot that day, I've never been on empty before, or since, and I never want to repeat the experience.

In 2011 I had a pocket full of Power Bar products so I could fuel on the bike (or by the road) and performed much better. I also stopped at the first feed station (I hadn't done in 2010, a really stupid and junior mistake, and the primary reason for my energy depletion later).

This time, I'm trying an idea for Ironamn fuelling - to put a load of liquid gels into a drinks bottle. You need to use thin liquid ones like the Science in Sport ones below, or the High5 IsoGel, otherwise the mixture is too thick to get through the nozzle. 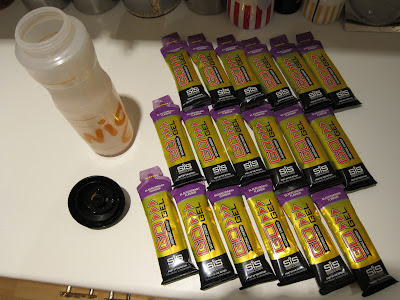 Save time, pocket space, and stickiness!

There's nothing fiddlier whilst cycling than trying to extract a gel from your pocket, unwrap it, and consume it without dropping any rubbish. This could save a huge amount of time in an Ironman race, so it's a good opportunity to try it out. 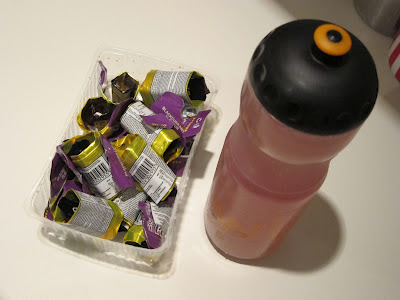 12 gels fit, almost to the from

The bottle feels oddly heavy, and I'm pretty sure it's going to be very weird "drinking" the gels, but let's see how it turns out. 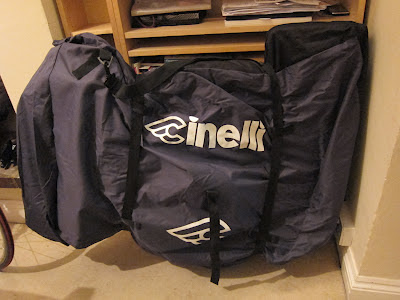 We also took advantage of a good accessories sale at Evans and picked up a couple of soft bike bags - total bargain at about £35 each - 10% off total for two items, with 15% off if you buy 3 items, so we got two of these and a £1.99 water bottle. A bargain for saving the interior of the car!

This was the last two years' performance:

This year, I'd like to get sub-5 hours, but there is a different route so let's see what happens. Finishing in the bottom fifth (80th percentile or below) is a pretty poor show too, I'd like to be in the middle third (33-66%), but there are some kick-arse cyclists that do this every year, so let's just see how it goes.

Oh, and just to make it fun (and more Ironman relevant), I'm tack ing a 15-minute run onto the end as soon as I finish!