This weekend I had planned to go for a long bike ride with the Mrs on a route she tried out last weekend and really enjoyed. I like to get a parkrun in on a Saturday morning, and enjoy trying out unfamiliar courses, so I agreed to meet her in Kingston after my first visit to Kingston parkrun.

Unfortunately all hell broke loose at the day job, so Mrs was on and off the phone over night, and again this morning. Today's ride was off - rescheduled for tomorrow. Instead we'll go for a run together later this afternoon.

So that left me with a parkrun to do, but nothing afterwards. With working almost exclusively in Zone 1 lately, I have missed going for a 'balls out' parkrun, and seeing what I can do. With Kingston an easy 25 minute cycle away (a lovely warm-up and cool-down duration) I thought today was the day, let's put some real effort in and see how it goes.

I arrived at the start with a minute or two to spare, and joined the group. There seemed to be about 50 or 60 people there, a good size for a parkrun on a course that was fairly narrow in places, and had a number of people to navigate who were just out walking and enjoying their non-parkrun morning (they don't know what they're missing!). 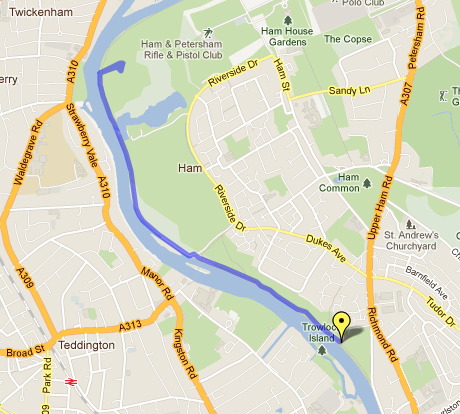 Elevation (according to Garmin)

I had quite a clumsy arrangement to run in, with my iPhone tucked down one glove (I fancied some music for a change today) and my bunch of house and bike keys tucked down the other glove. We set off after the race briefing and I was immediately caught behind someone slower. I held back and waited for a gap, and pulled round. I felt good, fresh from only having had a 15 minute swim yesterday, and confident. I didn't have "new PB" as the be-all and end-all, but my previous was set almost a year ago at Wimbledon Common parkrun on 5th April 2011, so I felt like an improvement was due.

I went off a bit quick (as ever) but tried to keep cadence high and speed constant. I was surprised at how quickly I reeled in a few people over the first couple of km. I was running well, I knew it was fast, but it was a bit unfamiliar as I'd spent so much time at sub-150 BPM heart rate lately, and here I was well into the 160s.

I haven't seen Zone 3 for a long time!

I tried to wind it up on the return leg (it's an "out and back" course) and checked my watch for the only time - it said 17 minutes and something, and I was a few metres shy of 4km. I realised that means that all I needed to do was put in a sub-5 minute km and I should break 23 minutes.

I wound it up over the last 500m, had a near sprint for the line, and stopped my watch. Looking down I almost passed out in shock - not that I'd broken 23, I was kind of expecting that, but by how much!

I still start too fast and get slower before bursting at the end though - this suggests there's more to come just by better pacing even with no fitness improvement.

Even though all my training for the last 6 weeks has been focussed on Zone 1 - I still smashed it! I'm overjoyed, and really happy to see some results from my hard work.

This is definitely getting a "Gold" entry in the training diary.
Posted by Norm at 13:42