I try not to think too much about the long term plan too much. I know I want to to race more and get better/faster/fitter, but at what distance or event I'm fairly sanguine. My approach is to relax, go with the flow, and see what I end up signing up for. I kind of let my subconscious get on with it while I watch from the sidelines. As a result it sometimes gets carried away before I can get it in check - but at least I know I'll always have a full calendar.

I entered IM 70.3 UK 2014 a while ago, and a few minutes ago also entered the full distance IM UK 2014. It looks like 2014 will be another year of iron! I'm also fairly convinced that in September my inner event-enterer will be signing me up to IM Wales again too. Glutton for punishment? Certainly. I have unfinished business on both of those full distance courses. They were my first, I was young and naive. I loved the experiences but made many rookie mistakes. I can go a lot faster. A lot faster. 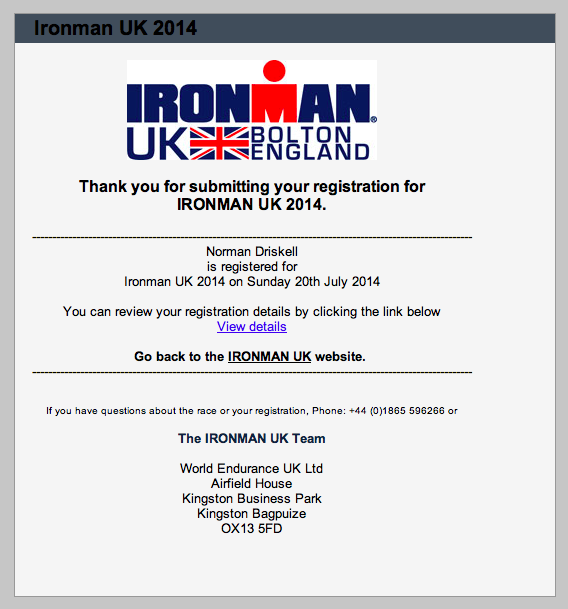 Oops, I did it again

Also for 2014 there's Hell of The Ashdown to do (missed that this year due to ITBS woe), Ride London, a bunch of Thames Turbo sprint triathlons, the Virgin Active London Triathlon (really enjoyed the Olympic Plus event this year), and probably much more. I shall certainly be entering the Ultra Race London Ultra 50km (when entries are open, no news on that yet but I assume it'll be going ahead), I'd really like to run further too (Mrs is getting the bug for ultra-running, it's infectious). I really fancy a 50-miler, one day maybe longer (but probably not next year).

There are also the little "someday/maybe" side projects that swim around my head. I want to do my London run-derground over winter to make training a bit more interesting. I also fancy riding LE2JoG (Land's End to John O'Groats) again - I've done it before but spread over two weeks. I fancy trying it in 4 or 5 days. Maybe a little project for Easter. Added to that, there are so many parkruns still to do; so, so many more parkruns!

There's plenty to do first though - Thames Turbo sprint series race 4 is on Monday, IM 70.3 Zell-am-See-Kaprun is next weekend, with the Valencia triathlon the week after that. The following week is the ITU World Series final in Hyde Park, we got some grandstand tickets for the Women's race on Saturday and the Men's on Sunday - and Mrs even managed to secure a spot in the open sprint race so is racing on the famous course. I decided 4 consecutive weekends of racing was probably one too many for me so I shall be on cheering and photography duty.

There's nothing quite like a packed calendar!
Posted by Norm at 13:45