A brick session to remember: Part 2

Read A brick session to remember: Part 1 for the back story.

Huddled under the heater in the foyer of the Chevin Country Park Hotel and Spa, me and Mrs watched a chap park up in the car park and walk towards us. He introduced himself as Alec, an assistant to Jonny and Alistair. Evidently, "the boys" as they were regularly referred to, were on their way, just coming up the hill now.

We waited, a little nervously, and made some particularly tiny small-talk. The description had said "train with them on the Yorkshire Moors" and "join them for a run and a bike ride", but we didn't have any idea of what that really meant. The text is always going to imply something amazing to capture the interest, but what would the reality be? Would it be just us and them, or would there be more of an entourage, maybe some other people along as an obligation to their sponsors?

The boys arrived within a minute or two. They rounded the corner of the drive way, came up the path, and dumped their bikes on outside. They were dressed identically, and riding identical bikes. They certainly looked the part. They walked straight in and we were introduced.

We would be out on our own, the four of us, for "about 90 minutes" (we were asked how long we wanted) and then we'd come back, do a quick change, and go for a run for "about half an hour". Sounds awesome. I asked for a picture. 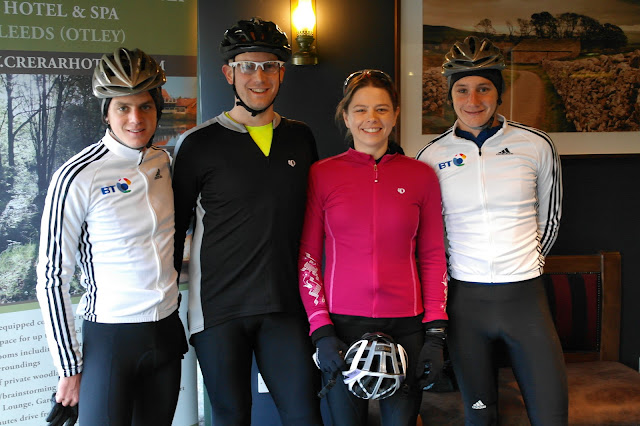 Alec reminded the boys to unzip their warmers so the BT sponsorship could shine through.

We headed outside and picked up our bikes. I asked for another picture :) 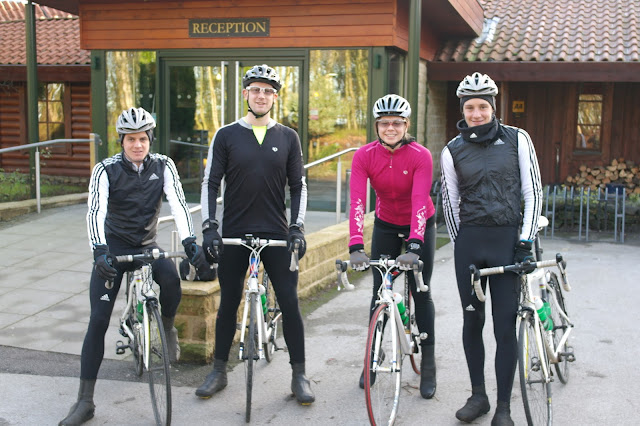 We've all got the same Gatorade 750ml bottles. It's a sign. I'm not sure of what, though.

We set off, out of the Hotel, and turned left. Holy crap I'm cycling with the Brownlees!

Very quickly they split up and cycled one each with us, Alistair and me at the front, Jonny and Mrs at the back. It certainly took a little while for me to relax into the ride. We went at a respectable pace, and kept the cadence high. I found it a bit hard to make conversation at first, but soon settled into it.

The boys were brilliant with us. Given they didn't know us from Adam (and Mrs Adam) they made us feel very at ease. The roads we were on were part of their training area, though they obviously go a lot further afield.

We talked about training (theirs and ours), their races, motivators, technique, and all sorts of other things. They would swap round occasionally, and we both had a chance to have a good chat with both of them. Speaking to Mrs afterwards I think we were both having the same conversations with each of them, but they didn't seem to mind.

I spent quite a while discussing grass roots sport with Alistair, and we spent some time talking about parkrun. It turns out Alistair has run parkrun, once before. Leeds run number 71, where he won - taking out the field with a super fast time of 15:36 - over 2 minutes ahead of second place! Here are the race results and his parkrun profile.

Mrs and I had decided to ask and see if they wanted to do Leeds the following morning, but they'd already told us they had "hard run training" the next morning, so we didn't ask in the end. Hard run training turned out to be four minutes full pelt on a grassy hill, then a short break, then three minutes, faster, then a short break, then two, and then one minute. A one-sided pyramid (sawtooth?) session.

We took a rolling route with a few hills, some short and sharp, others longer climbs. I realised it was quite a while since I'd cycled up a "proper hill" - the going was good, but a mental note was made to go and get some hill practice in soon...

Mrs was doing really well. I knew she was nervous going into the day, and worried that we'd all just zip off into the distance. More than once I was really surprised when we got to a top of a hill, and I turned around and she was just cresting it too - I don't mean that at all condescendingly, I've been cycling years and years longer than her, and more seriously, so I'm really pleased and proud of her performance. 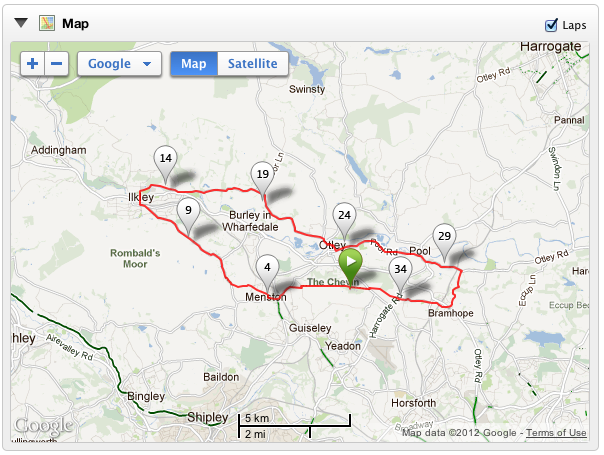 We headed out along the ridge towards Ilkley, and then descended fast to the town. Taking a right after crossing Ilkley, we headed back up the valley before turning back round and up a long ascent to where we started. We asked for "about 90 minutes", we pulled back into the Hotel after one hour and 37 minutes. Pretty much spot on timing, not bad for guys who weren't wearing any watches!

Basically; down, along a bit, and up.

Occasionally when flying round some winding roads on a descent my mind wandered to what would happen if I accidentally clipped a wheel and one of them went tumbling off... "Careless oaf dashes Olympic dream" the headlines would read. Not the best way to end up in the newspapers. Anyway, nothing like that happened!

This is the full Garmin log of our ride.

We got back to the hotel, completed the longest T2 ever (about 10 minutes) and went out the front to meet the boys again. Mrs and I exchanged looks while we got changed - was this even happening?

Running was even more personal than cycling - the four of us could talk together. Well by talk I mean I could gasp the odd question and they could chat happily in response!

The most striking feature of our run was the effortless grace with which Jonny and Alistair seemed to cover the ground. Years of drills and circuits, and a mantra that the more time you spend on the ground the slower you are, has led to them almost floating over the terrain. It's a wonder to watch, it really doesn't look like there's enough time spent on the ground to lift off again with any force.

Running certainly separated the men from the boys. I found it tough to hang on at times. We were 100% off road, and went through woods, across uneven rocky areas, and sometimes where there weren't any paths at all. The Brownlees grew up in this area and have been running here all their lives - and it showed. 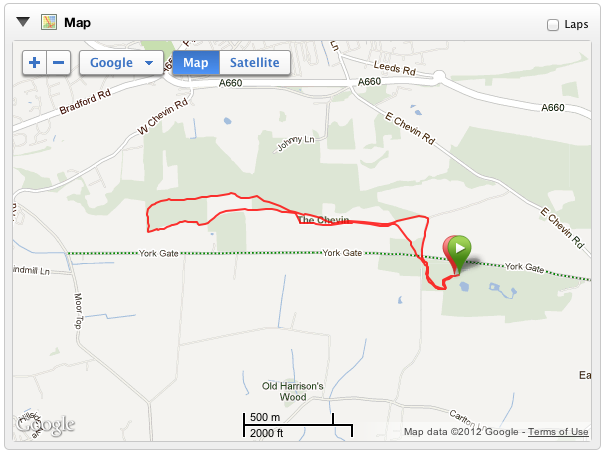 Our run route. Note the way it's nowhere near any roads or paths.

We talked about running technique, and the benefits of off road training with reducing injury and delivering a more rounded strength workout as no two steps were the same.

At the end I certainly felt like I'd run more than 5km, but felt very differently to after a normal run. There was no feeling of repetition in my knees or ankles - I felt more like I'd done a gym session!

This is the full Garmin log of our run.

We returned to the hotel, I was on cloud nine. We agreed to meet at 7 for dinner (yup, we were having dinner with them too!).

Mrs wrote some notes for her blog, I just had a shower and snoozed to repeats of Red Dwarf. I had a really odd dream about losing my way in transition, not having the right shoes (my SPD commuter shoes, not right for my tri-bike), and the lead female runner finishing before I'd even got out on my bike. Very odd.

We met in the hotel bar and took a table. Discussing money in triathlon, sponsorship, and the lack of a UK league system in triathlon meaning the boys race for a French team, we relaxed and felt very at ease. It felt like we were just sat in the pub with some mates. For all their Olympic potential, and clear hero status in British triathlon, they're just a couple of guys - happy enough to kick back and chew the fat as much as the next guy.

We moved through to the dining room and took our tables for dinner, still the four of us. Me, Mrs, and the hopeful Gold/Silver Olympic triathlon duo. I tried to imagine sitting in a similar place with two footballers - Rio Ferdinand and Wayne Rooney maybe. Not only would you be absolutely mobbed by people and press, but the conversation wouldn't be half as interesting! The Brownlees were well spoken, polite, and interesting. They were bright and articulate. They are and will be great ambassadors for triathlon in this Olympic year, and beyond.

We talked more, covering diet (they eat whatever they want, near enough), drugs in sport and drug testing, sports science, training, and other non-triathlon topics. We talked about us a bit too, what we do, triathlon racing experience, successes and failures, and more. They seemed genuinely interested and listened.

We wrapped the evening up at about 10. Jonny had to be in in case the drugs testing crew turned up! Apparently you need to give an hour every day and say where you'll be, they can turn up at any time, and obviously without warning. 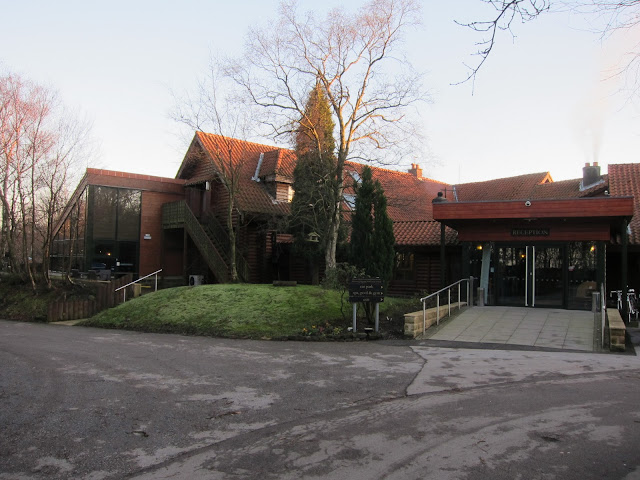 So that was it, our day with Jonny and Alistair. They were great for their sponsors and really did commit a whole day of time - more than me and Mrs ever thought we'd get.

That was "meet your heroes" week. I'm not sure I'll have another one like that. I'm sure there will be other meet'n'greet poster signings, but I don't think we'll ever have a day with anyone like the Brownlees again - particularly with no PR, management agents, or entourage.

Thanks to Richard Downey from the Professional Sports Group for being so efficient and organised, thanks BT for having a ball, and thank you so much to Mrs for the +1 invite.

Most of all, thanks to Alistair and Jonathan Brownlee for a day of your time - good luck this summer, we'll be cheering you on until our voices are hoarse.
Posted by Norm at 20:16