A brick session to remember: Part 1

I'm North of Leeds, near Otley, in an odd but pleasant enough little country spa. It's cold. I've got two racing bikes with me, and untold layers of warm running and cycling gear. I left London at 17:45 yesterday, after work, and drove until about 22:30 to get here, and I've been looking forward to this day for months.

Mrs occasionally gets invited to special events through her job, I get to play +1. Last year we were fortunate enough to get a couple of seats at the BT British Olympic Ball. This was a fundraising event for the British Olympic Association that was held on 7th October last year at London Olympia. 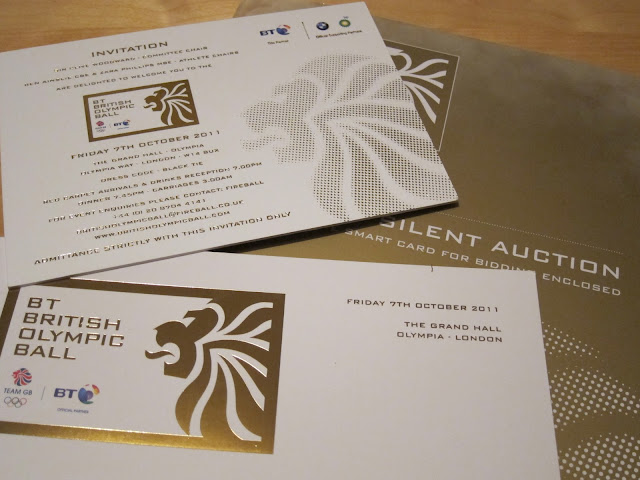 We got dressed up, arrived, at and set about getting acclimatised with the help of a few of the glasses of fizzy that were in generous supply. There were a lot of Olympians, past, present, and hopeful with well over 80 GB Olympic medals had been won by attendees, and hopefully many more to come. Our sporting interests are fairly polarised, so we recognised a couple of cyclists including Bradley Wiggins and Mark Cavendish, and a few others who have are very active in sport and broadcasting such as Clare Balding, but there were many more faces that looked familiar but we couldn't place. All the guests had made a big effort to look their best, and we spent some time admiring the amazing dresses on display.

Almost immediately we spotted Alastair and Jonathan Brownlee. We circled a bit, nervously, then I approached and asked if we could get a photo with them. They graciously agreed, and we got a brilliant snap for the album: 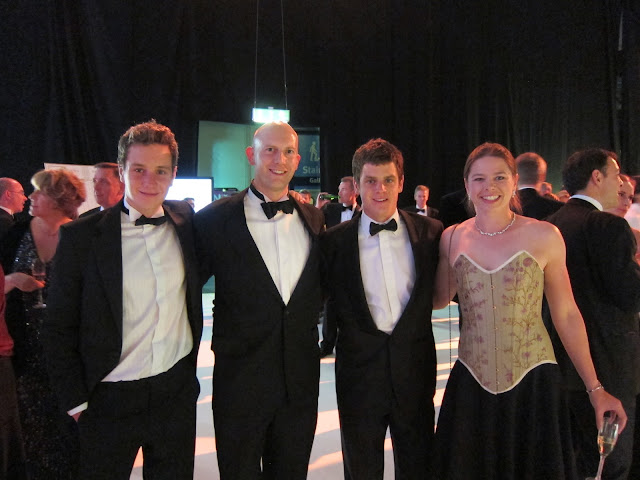 I'm the one that isn't a girl or a Brownlee

We took our seats and looked through the goodie bags. There was a selection of products from the sponsors, plenty of pamphlets and adverts, and a few moments. I was particularly happy to get some chocolate from the BT Tower [@bttowerlondon] - we chat occasionally on twitter, and he/it even put my name in lights last summer. Don't judge me, I often speak to inanimate objects and have a tendency to anthropomorphise.

We hadn't done any research on what the night would involve, and were happily surprised when it turned out that the night was to be comparéd by Stephen Fry and Miranda Hart, both of whom me and Mrs are big fans of. After a song and dance into and a demonstration of some BMX riding where they seemed to spend more time upside down than downside down, Stephen and Miranda entered to get proceedings underway. We heard from many seniors in British sport and the Olympic Association including welcomes from Sir Clive Woodward CBE (Chairman, BT British Olympic Ball), Sir Michael Rake (Chairman, BT Group PLC), and Lord Moynihan (Chairman, British Olympic Association). Before the meal prepared by Tom Aikens (youngest ever chef to be awarded two Michelin stars) Grace was spoken by Denise Lewis CBE, and following food a toast by Ben Ainslie CBE, and a Team GB address by HRH The Princess Royal (President, British Olympic Association). We were also treated to a turn from from Rory Bremner and some entertainment from Tinchy Stryder and Dappy.

We ate, and drank, chatted to the other people at our table, and generally had a really nice time getting gently inebriated.

There were two auctions on the evening. One was the Grand Auction, a conventional live auction hosted by Edward Rising, with some big ticket items such as multiple holidays, first class flights to exotic locations, and a battery of Olympic tickets. I have honestly never seen money spent so quickly with the bigger items going for many tens of thousands to much "ooh-ing" and "aah-ing" and applause as each item sold. The second auction was a silent auction that was running in the background all evening. The items were listed in a catalogue and the current bid price for each was scrolling on TVs which were up all around the dining and bar areas. Bids were placed via what resembled credit card and PIN pad readers, one on each table. The cards for this auction were provided in the goodie bags, and unique to each guest. They were registered to you by filling in the registration card and handing it in to one of the helpers who were on hand.

One of the items in the silent auction was a training day with the Brownlee brothers. 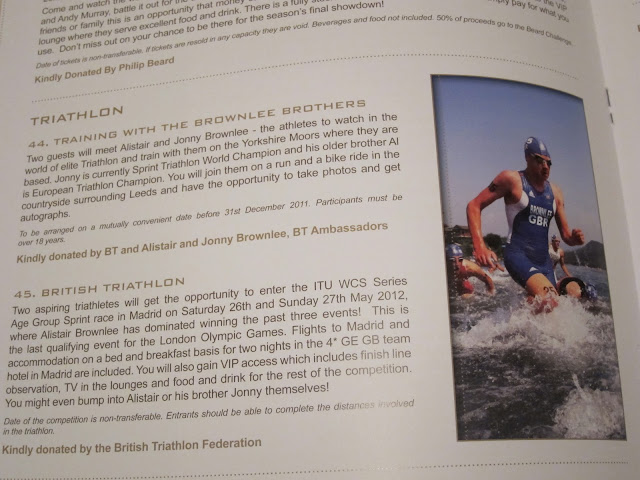 44. Training with the Brownlee brothers

Two guests will meet Alistair and Jonny Brownlee - the athletes to watch in the world of elite Triathlon and train with them on the Yorkshire Moors where they are based. Jonny is currently Sprint Triathlon World Champion and his older brother Al is European Triathlon Champion. You will join them on a run and a bike ride in the countryside surrounding Leeds and have the opportunity to take photographs and get autographs.


We talked about what an amazing day that would be, and given that there were no bids yet, the reserve was affordable, and we were both nicely lubricated by now, we thought we'd kick it off and place a bid at the reserve price.

Before long someone outbid us. Oh well, never mind. Although it was still an affordable amount. A shared thought and knowing look. We placed another bid.

Excitedly we watched for our lot to come round again on the TV. During dinner the price edged up slowly. It was starting to get a bit out of control, and moving from the realms of an unplanned but affordable impulse purchase to something that would require some planning to fund. We worked out what our maximum would be, gulped a bit, and placed the bid.

Then an amazing thing happened. Stephen and Miranda wrapped up, and announced that Tom Jones would be playing a set! I'm not a Tom fan, but the opportunity to have a dance to absolute classic songs, and be within about 2 metres of the man strutting his not inconsiderable stuff was too good to miss. We went for a dance. As is often my way, I danced for perhaps a bit longer than was necessary. Thankfully, there were no podiums. 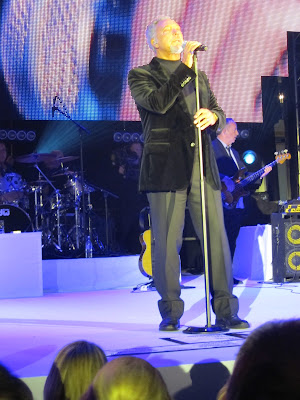 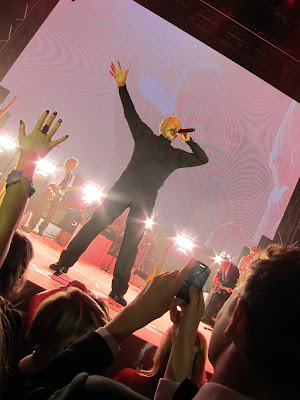 I had to drive up to Wakefield the next day for a stag do, so we couldn't sty out for too long, so at about midnight and before the taxis turned into pumpkins and our clothes to rags, we gathered our things together and set off home.

On the way out, and really quite tipsy by this point, I insisted we waited by one of the TVs to see where the Brownlee bidding had got to. No further bids had been placed since we were last outbid - it seemed clear that just us and one other bidder had pushed the price to where it was now. Well, I'll have the last laugh! I popped over to the nearest table, borrowed their card reader, and nudged the bid up another few hundred - that'll teach him!

We left and headed home. The next day I got worried that we might have accidentally won, but I got no phone call or email, and after a few days thought nothing more if it. At least we'd pushed the lot up to a good price, and done our bit for the Olympic movement.

And then, quite a while later, I got a letter. We'd done a bit more for the Olympic Association than we'd thought... 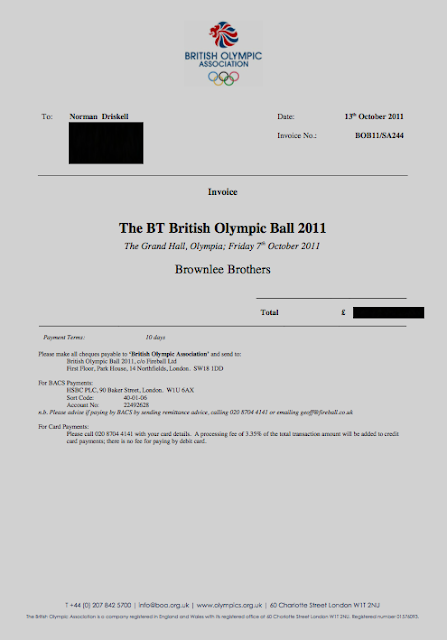 And this is how me and Mrs ended up in North Yorkshire, huddled under a heater in the foyer of the Chevin Hotel and Spa in full cycling gear, waiting for Great Britain's triathlon prodigies and Gold/Silver Olympic Triathlon hopefuls Alistair and Jonathan Brownlee to come and meet us for a bike ride in the countryside, followed by a bit of a run. 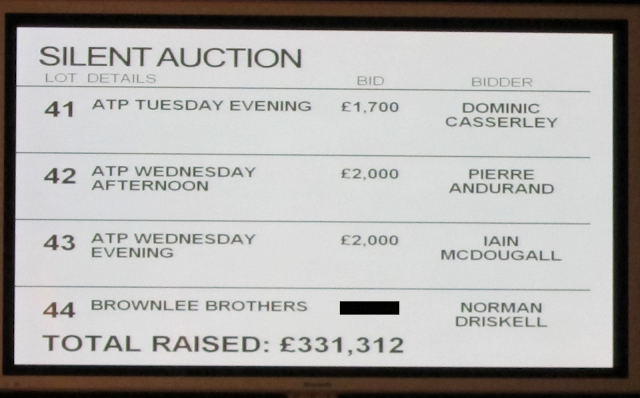 The state of play when we left at midnight, and that's the way it remained. Oops...!