Over the last couple of years I've been to a few Centurion Running events to support Mrs in her ultra running adventures. I've always been impressed at the slick organisation and friendly supportive atmosphere. For I while I've wanted to be on the other side of the fence and take on a 50-mile event myself. 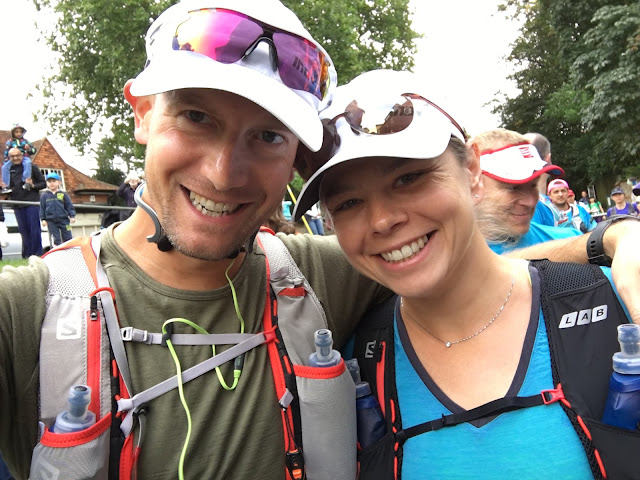 After spending a couple of days taking a look at the course I knew what was in store. Having run the full length of the North Downs Way recently, I was fairly well hill conditioned. The hills on the CW50 course aren't too severe - none are really big, and only one is exceptionally steep, and there were thankfully few steps - but there are a lot of hills, continual ups and downs and not so much on the flat.

I was fairly confident I could get to the end, the unknown was in what condition I'd be when I got there! The cut-off was set at 13 hours, with cut-offs at each of the five intermediate aid stations. I was determined not to think about time though - it's an unhelpful distraction when the only aim in my first 50 miler is to get to the end within the cut-off.

Mrs was running too, and we had decided to stay at The Fat Fox Inn in Watlington again. I stayed there half way round my recce run and was impressed with the quietness of the rooms and the excellence of the food.

On Saturday morning we drove over bright and early to Race HQ in Goring in good time to get kit checked, and pick up our numbers. I was a bit stressed as I wasn't able to find any breakfast, but thankfully we had leftovers from the night before (though we did get a few odd looks for eating lumps of steak out of a foil package). 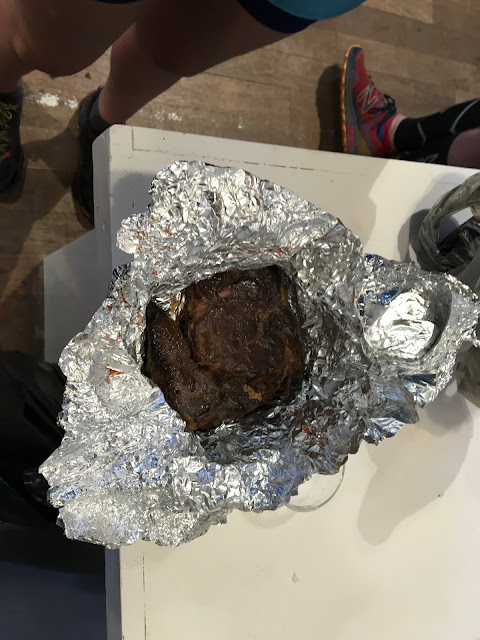 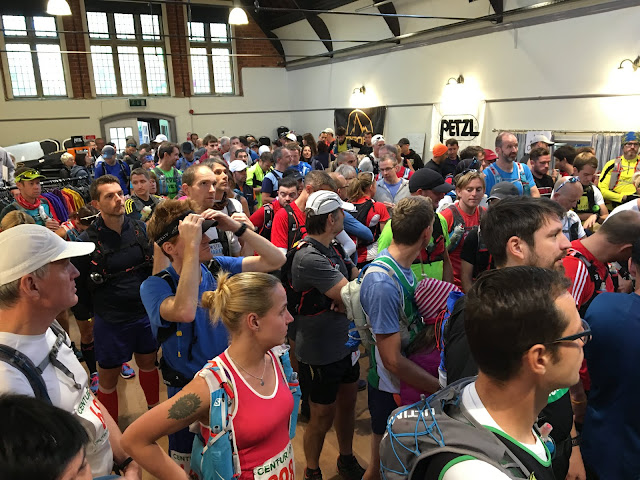 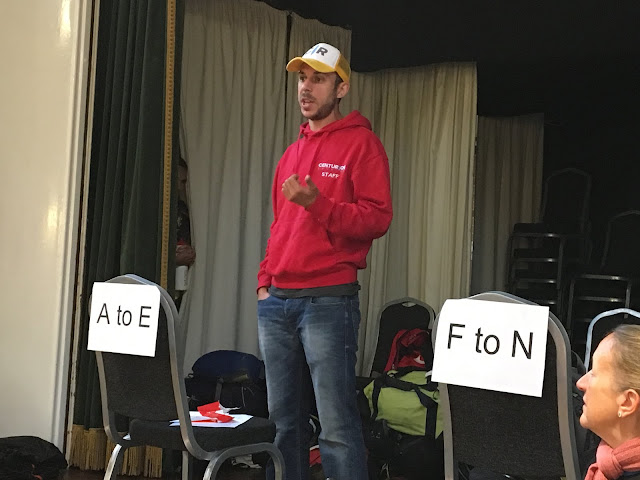 James Elson, Race Director, gave his usual light hearted (but no nonsense) race briefing. I was starting to feel nervous... Before I knew it we were walking the few metres down to the start on the Thames Path and at precisely 9am we were off! 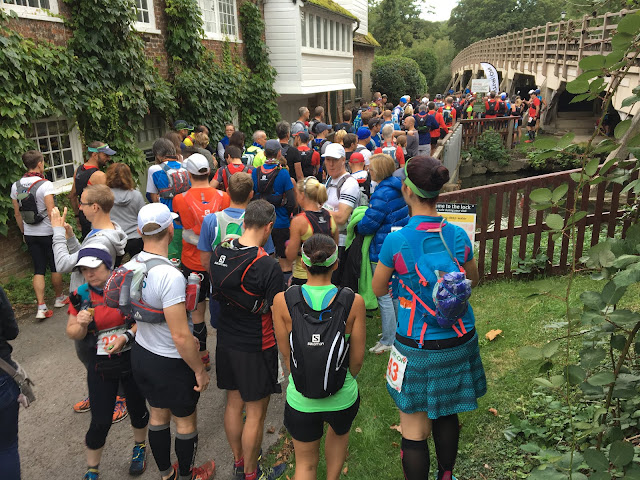 The first section down the Thames Path was fairly narrow, a bit of a squeeze for the 179 of us on the start line. I was keen to get off slowly and be sensible for the first few km while I settled into my stride, so I started about three quarters down the field.

Mrs and I had discussed running together, but this being my first attempt I wasn't sure what to expect so I chose to run alone. If we met up further through the race then then fair enough. That being the case, we ran at around the same pace for the first half-dozen km anyway with the gap between us varying from just a few metres up to a hundred or so. 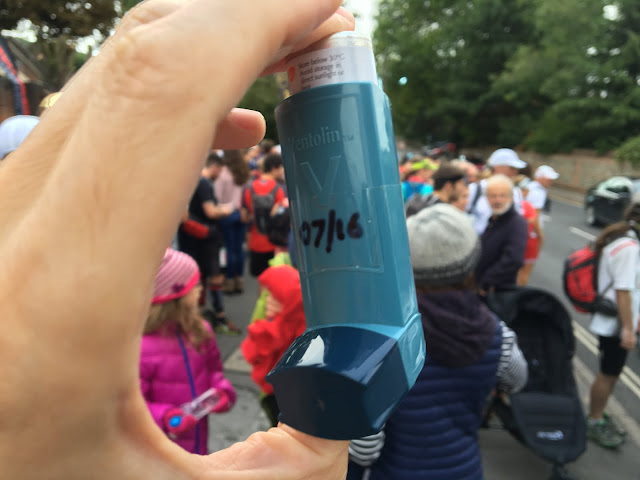 My pace was good, and I felt good. After two hours the first aid station came up, this was the 16km point at Tokers Green. Mrs had found that hanging around at aid stations accounted for a whole hour and a half of her overall time in her first 50 back in 2013, so we were both determined to adopt a quick in-and-out strategy. This was what she adopted at the North Downs Way 100 recently, and to good effect. I barely stopped at the aid station, all the nibbles were things like cookies, chocolate, and jelly babies - I didn't want to start filling up on sugar this early, so I got my water bottle topped up and set off quickly.

I was running well, bang on 8km/h average - keeping that pace up would see a finish in 10 hours, but I've learned not to think like that - I knew the middle of the course was where the bigger hills are, and I'd inevitably slow down in the closing sections as I grew tired and the light faded.

The course had been heading generally Eastwards and now turned to the North, heading up to the next aid station, 28km in at Bix. Louise had been popping up regularly in her role as a marshal, checking people were handling road crossings sensibly and shouting encouragement. "You're not getting squished on my watch!" she called at one crossing. 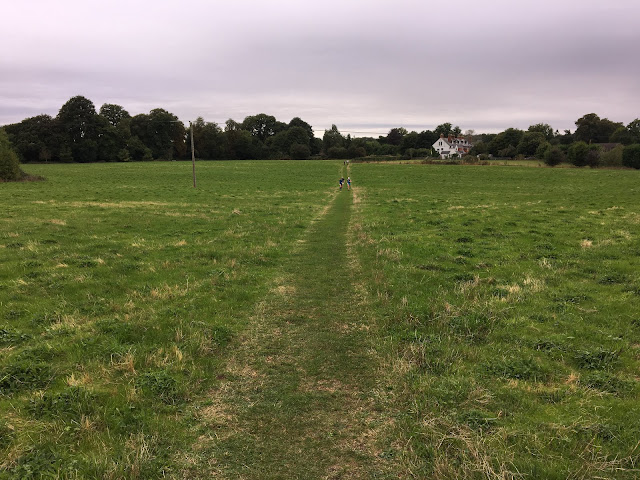 Mrs on the right, 50m or so behind

This was the first interim timing point, I arrived at 03:43:34 and in 143rd place and about an hour ahead of the cut-off time. The food at Bix was better for me; I took a few cocktail sausages, tiny sausage rolls, and a couple of cheese and ham sandwiches. I wanted to make sure I drank and ate well throughout the day - I'm nowhere near as well fat adapted as I have been in the past, so just trickling in the food was the plan (but still avoiding sugar).

I set off from Bix quickly again, making a few places as some of those who I arrived in with sat down for a bit. I'd continued at an average of around 8km/h, but there was a harder bit coming up. To be honest, although I remember some of the views and terrain, it's hard to remember what order it all came in. There were some beautiful houses and gardens, incredible views over the Chiltern hills, and no end to the changes in surface - woodland areas, grass, the odd section of road, fields full of horses and cows - you name it, we ran on it. This makes the course interesting and helps give a sense of getting somewhere. There's nothing worse than trudging along in a straight line, the horizon never getting any nearer.

I hadn't seen Mrs behind me for a few hours - but she's got an incredible diesel engine and never seems to slow down. I more than expected her to reel me in over the final third as my pace began to drop off. 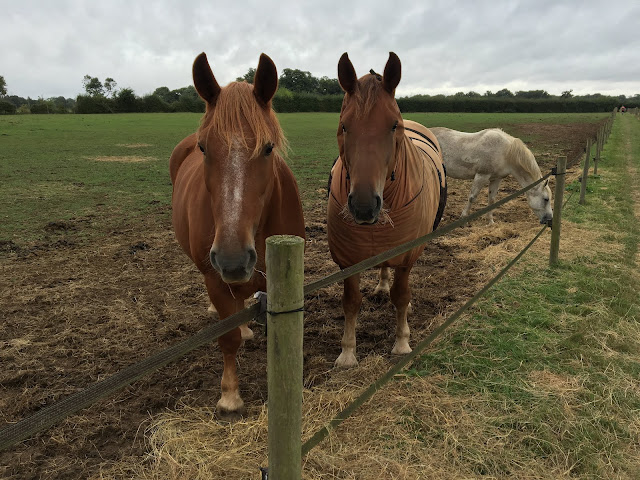 This next segment had some more serious climbs, including the steepest climb on the course coming out of Turville up to Cobstone Windmill. My pace slowed, but I was still running on the flat and downs, and hiking the ups. Checkpoint three at Ibstone School, Ibstone, was a welcome sight and at 41km represented almost exactly half way. My official time here was 05:16:53 and I had climbed a few places to 124th. I was encouraged, assuming I didn't have a tremendous collapse in the second half I should be in time to make it within the 13 hour cut-off.

I was getting a few murmurs from my legs now - right ankle was feeling a bit fatigued, and my knees were complaining. I'd maintained a steady effort throughout, however, and was still running on the flats and downs. I got a good mental boost ahead of the next aid station as I realised I'd crossed over from the day one route to the day two route of my recent course recce.

Downhill sections were getting more painful as my knees complained some more. Uneven surfaces were causing trouble now too as my right ankle continued to feel weaker. I told myself to keep running though, and I did.

Swyncombe aid station at 53km came into view, and I was delighted to find cubes of cheese! I had been really hoping for some cheese! I took some more little sausage rolls and bits and pieces, and set off again - still not hanging around at all in the aid stations.

I noted my watch ticking over to 56km, this is now officially the longest run I've ever done! I remembered the next section fondly from the recce run, a series of long gradual descents through some lovely forest areas - I was looking forward to opening up my legs and just flowing down this segment, but it was not to be. Knees and ankle were keeping me to a steady jog at best.

I was very happy to see the final aid station at the end of the long Grims Ditch section. I'd lost a couple of places in the previous few miles and was starting to suffer more. I stocked up well knowing it would be getting colder as the sun set. I stayed here for the longest time of any aid station, but it was still only a few minutes. I set off on the last leg with a time of 09:07:57 and still in 124th place. 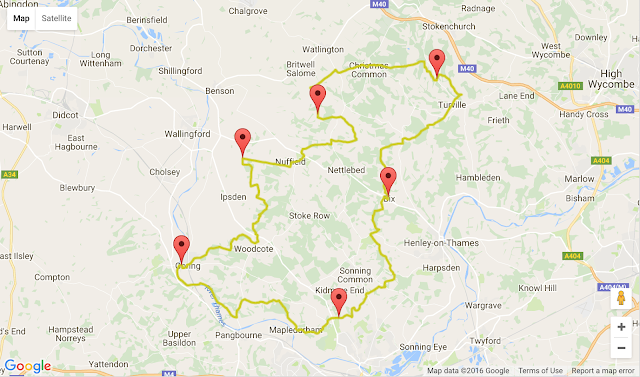 I was determined that any walking I did would be proper marching at pace, not strolling along, so as I slowed down I made sure not to fall into the trap of strolling along - you can lose hours that way. I regretted not getting my head torch out at the aid station or having it in an easy to reach location, and lost another place while I fished it out of my bag.

The final 6 or 7km were now hiking as fast as I could - the light had faded completely and it was my first time with a head torch. The torch was great, but I didn't have the stability to cope with the variations in terrain now so running would be a bad idea - even if I could run! More head torch practice required - I'm looking forward to getting out on Wimbledon common in the dark now.

It was a hard slog now coming back into Goring, an annoyingly circuitous route round to the back of the Village Hall, and then a fairly unceremonious finish in front of the timing desk - but, I did it! My first 50-mile race, finished in 11:38:31 and in 131st place. 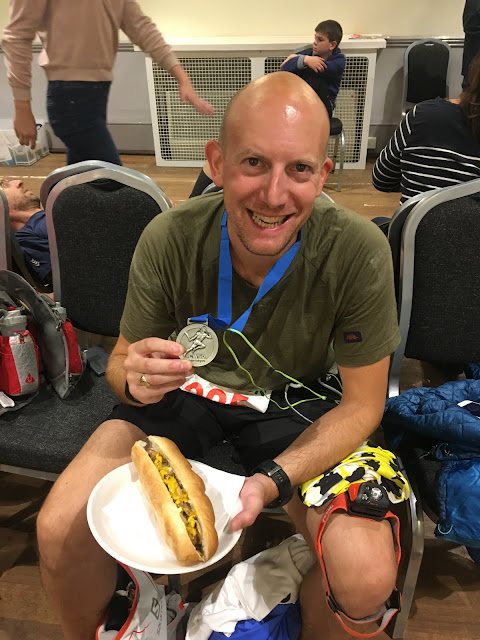 I can say already I'll be doing another one, and it'll be a Centurion event. I want to finish well, i.e. still running and not with bits falling off (ankle, knees). I didn't hurt myself with any seriousness, I'm writing this the following day and I'm a bit stiff and aching but nothing that won't recover over the next week. With some longer and more consistent training runs I'm sure I can build up more resilience. I've come a long way this year with endurance running, and I'm really enjoying it - more to come!

I really fancy trying the Grand Slam next year - but unfortunately the North Downs Way and South Downs Way 50s are already full! I'll join the waiting list and see what happens... 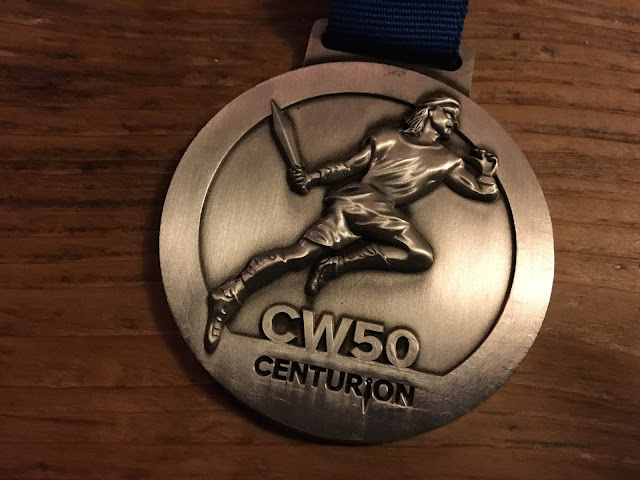 Thanks to the James and the Centurion crew, to the fantastic volunteers on all the aid stations, and to super-women Mrs and Louise, my ultra inspiration!
Posted by Norm at 17:44