Every movement this morning is accompanied by old-man sounds, you know the ones, the subconscious utterances that come with old bones and aching muscles complaining about being made to stand up, sit down, or tackle the stairs.

Why am I making old-man sounds? Because yesterday I took my second attempt at an off road trail race. I ran the second race in the 10-race Coastal Trail Series from Endurance Life. I've been signed up to the third race in Dorset for a while, Mrs ran it last year - she had entered the ultra distance but had to stop after the "marathon" (28 miles) due to missing the cut-off to go out again for the last 10km. She said it was "hilarious" - turn a corner, see a mountain of a hill you have to "run" up, and just laugh at it.

Following my experience at Ripon, a DNF after 30km, I thought I needed a bit of a warm up before tackling Dorset! 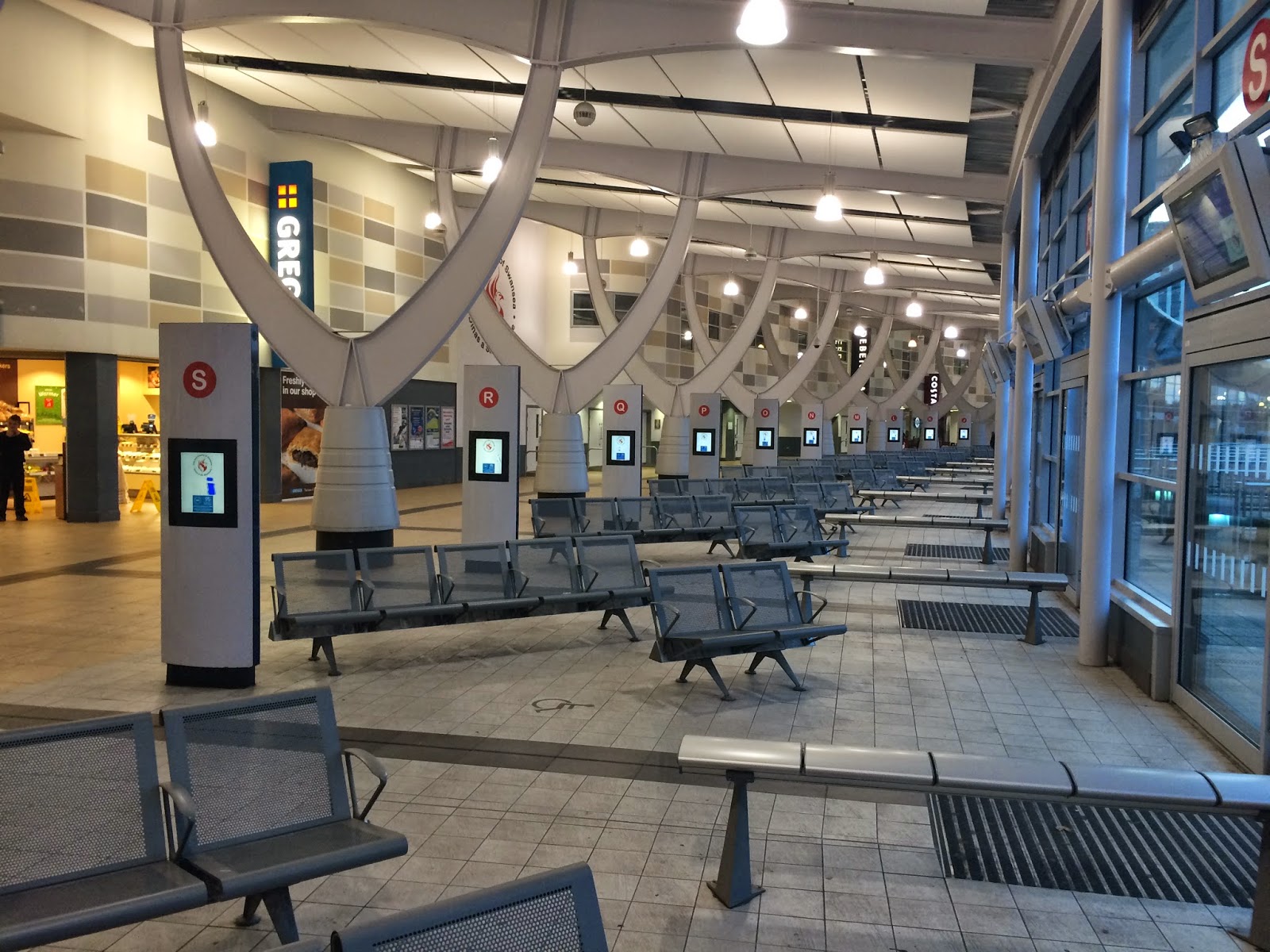 Swansea bus station is deserted at 8am!

Race two was on the Gower peninsula, Swansea bay. Mrs and I got the train down after work on Friday, stayed in Swansea Saturday night, and got the local bus number 118 (got your number) to Rhossili, hopping off at Middleton village hall, site of race HQ. 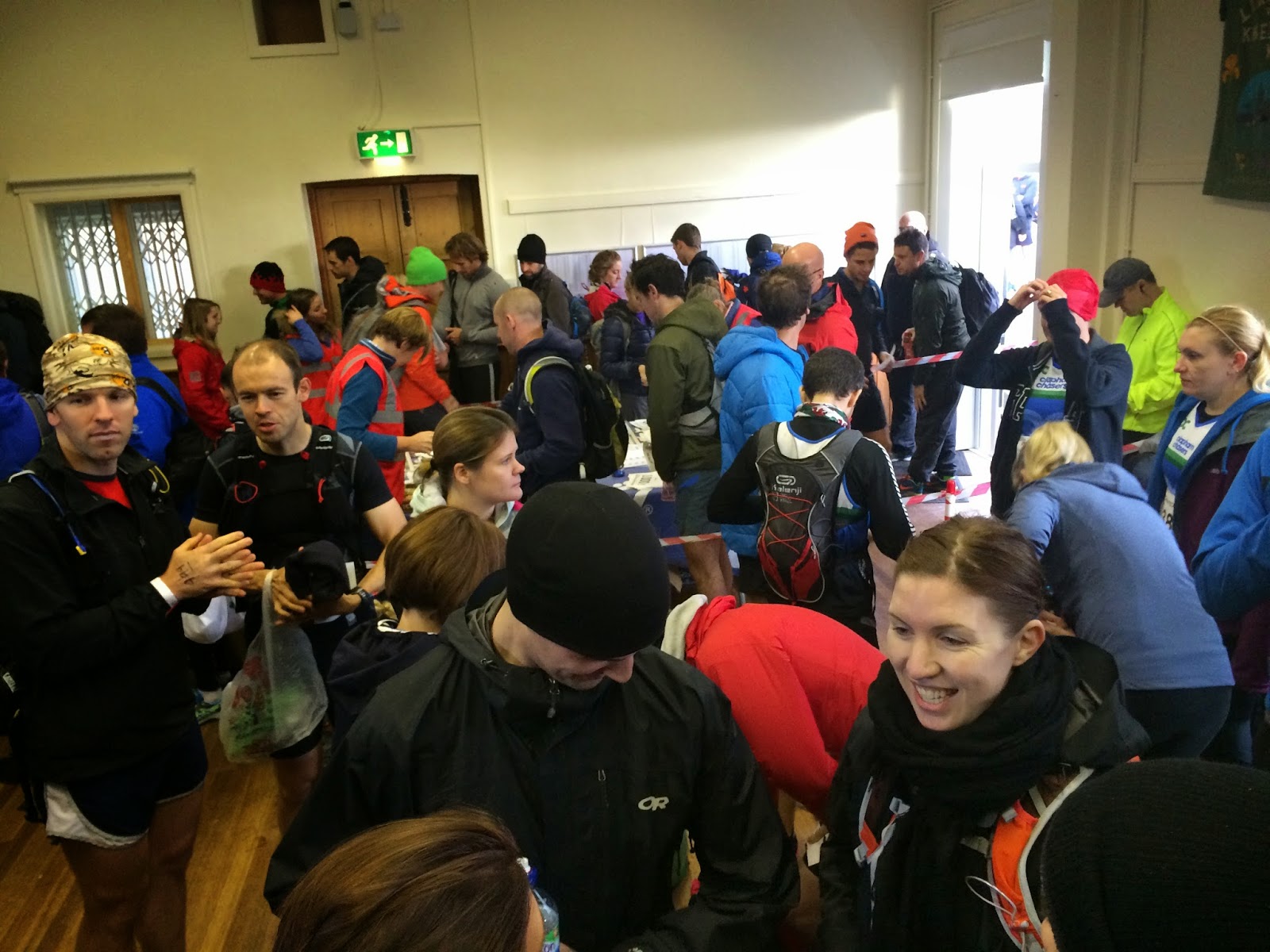 Another busy village hall, I'm getting used to these 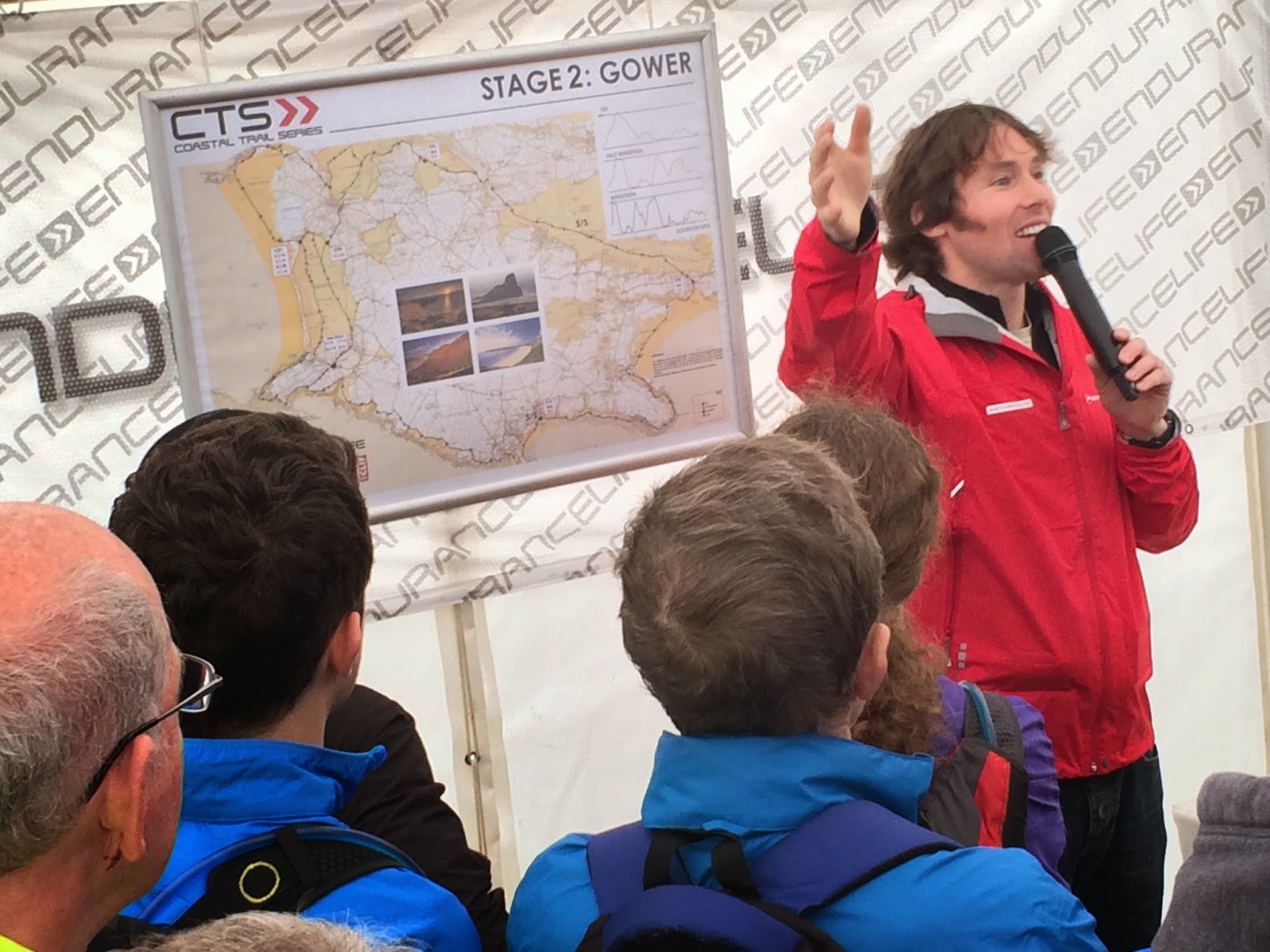 To avoid the crunch at the start we were advised to go on gun (wheezy hooter) time only if we were really racing and were hoping for a top-3 finish. Instead we could check out one by one with our dibbers. The dibbers are small ID tags that you insert into a reader to register your position and the time you were there, it's how you prove you've gone through the checkpoints (no naughty cheating thank you). I queued up and went off my own dibber time. 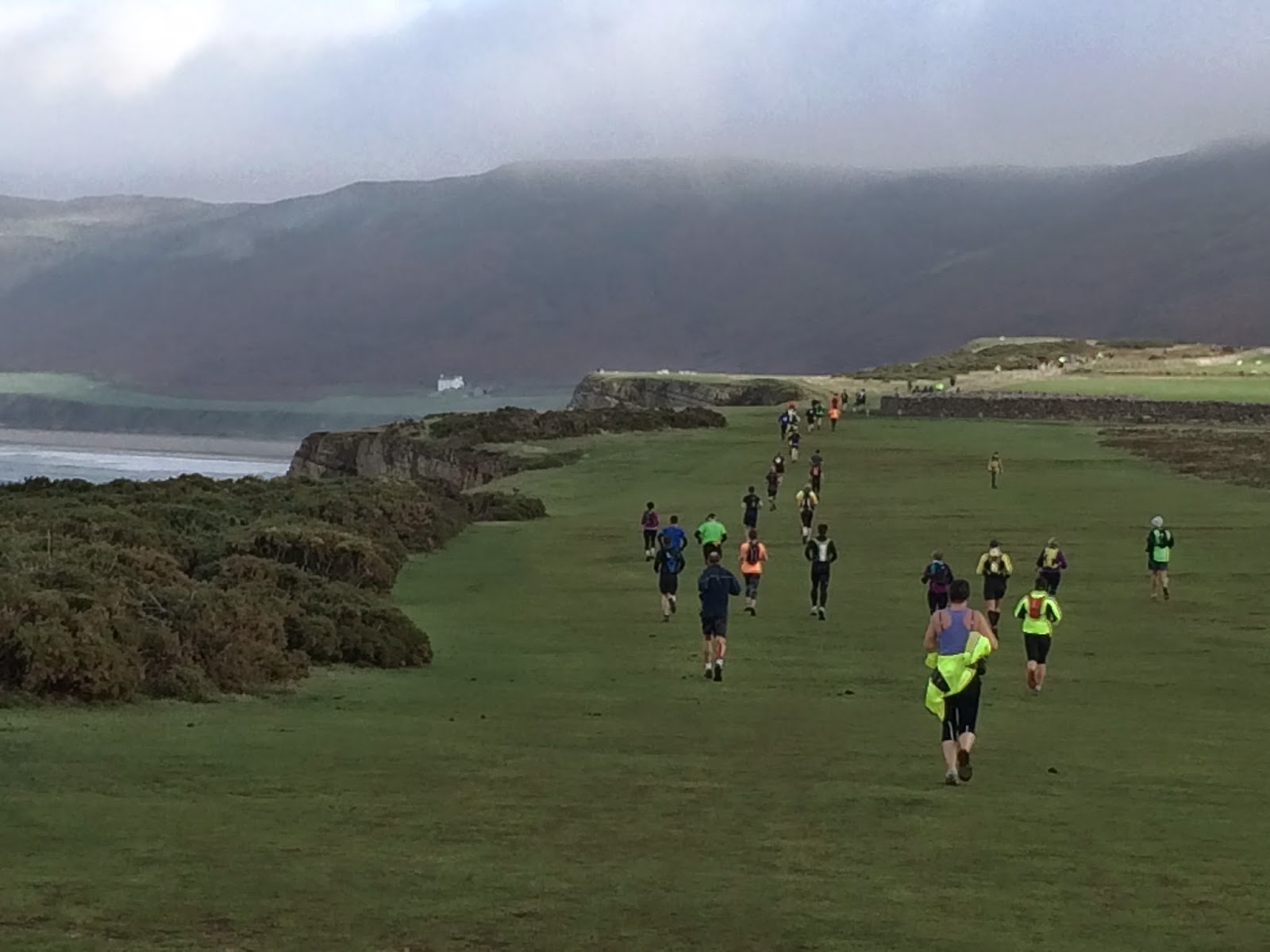 A plateau atop the first climb

The start was fairly gentle, a bit muddy due to recent rain but nothing too challenging. I'm glad I tightened my shoelaces before heading off, one poor chap had a shoe sucked off going through a muddy bit in the first 100m or so! We hit a nice big hill or two early on (heart rate through the roof!) before dropping down a steep decline that was in effect trying to run down a river. Following dipping my dibber at checkpoint one, it was down for a few km on the beach. I was feeling fairly good. The first few km I'd felt a bit drained of energy - I've had this before, last time I went focussed on low-carb, it seems to be a side effect of adaptation. It's brief, and passes relatively easily. 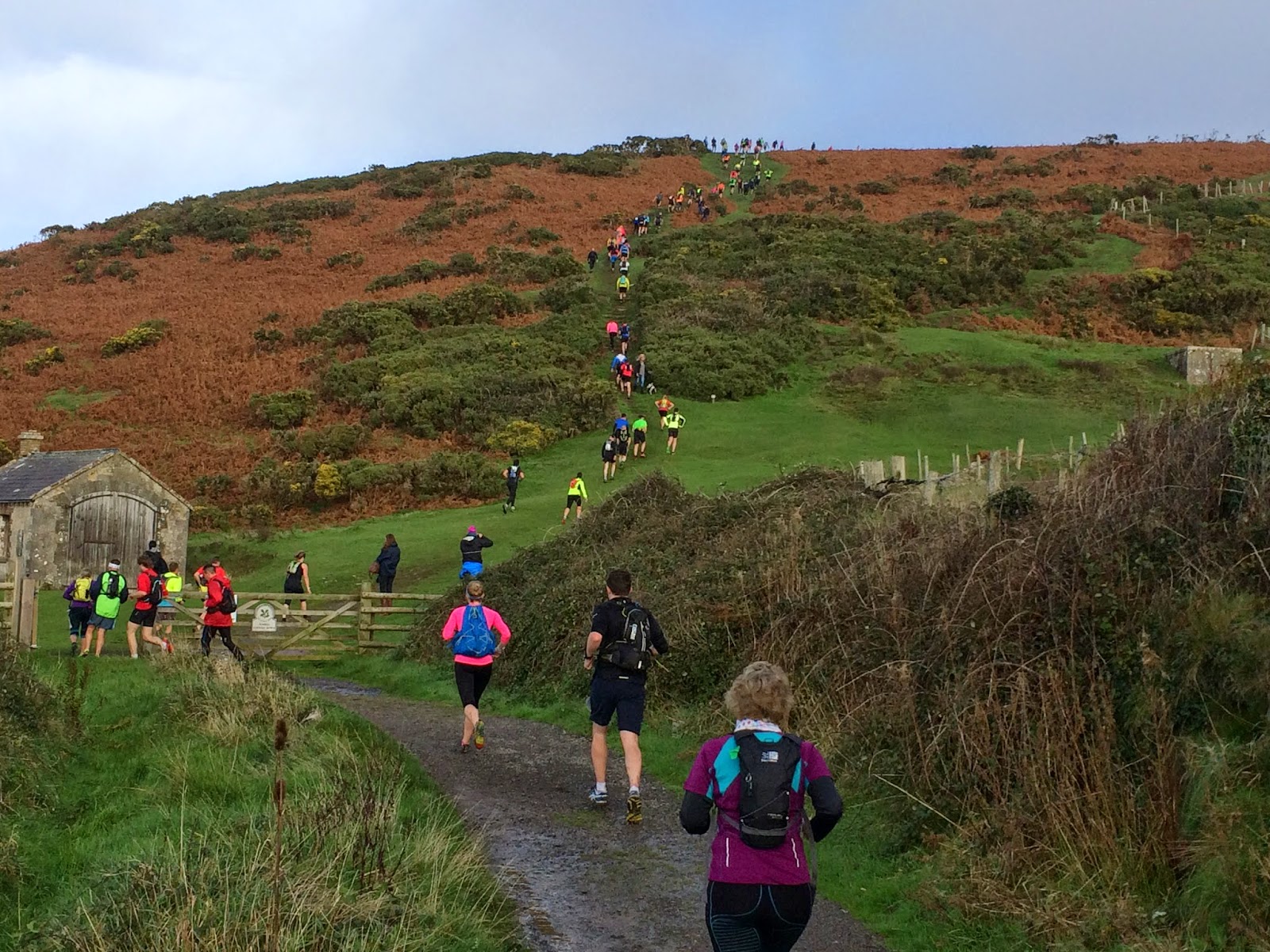 One of many climbs ahead with a little row of human ants climbing ever upward!

The beach was lovely, runners spread out in front and behind. Sand-dunes came next (running in deep sand is always fun). Wet feet and muddy legs - good fun! A few of us were jostling for position (it's hard fought in the mid-pack :). A long period on narrow muddy trails next, always either up or down, together with the odd very steep up for "fun". 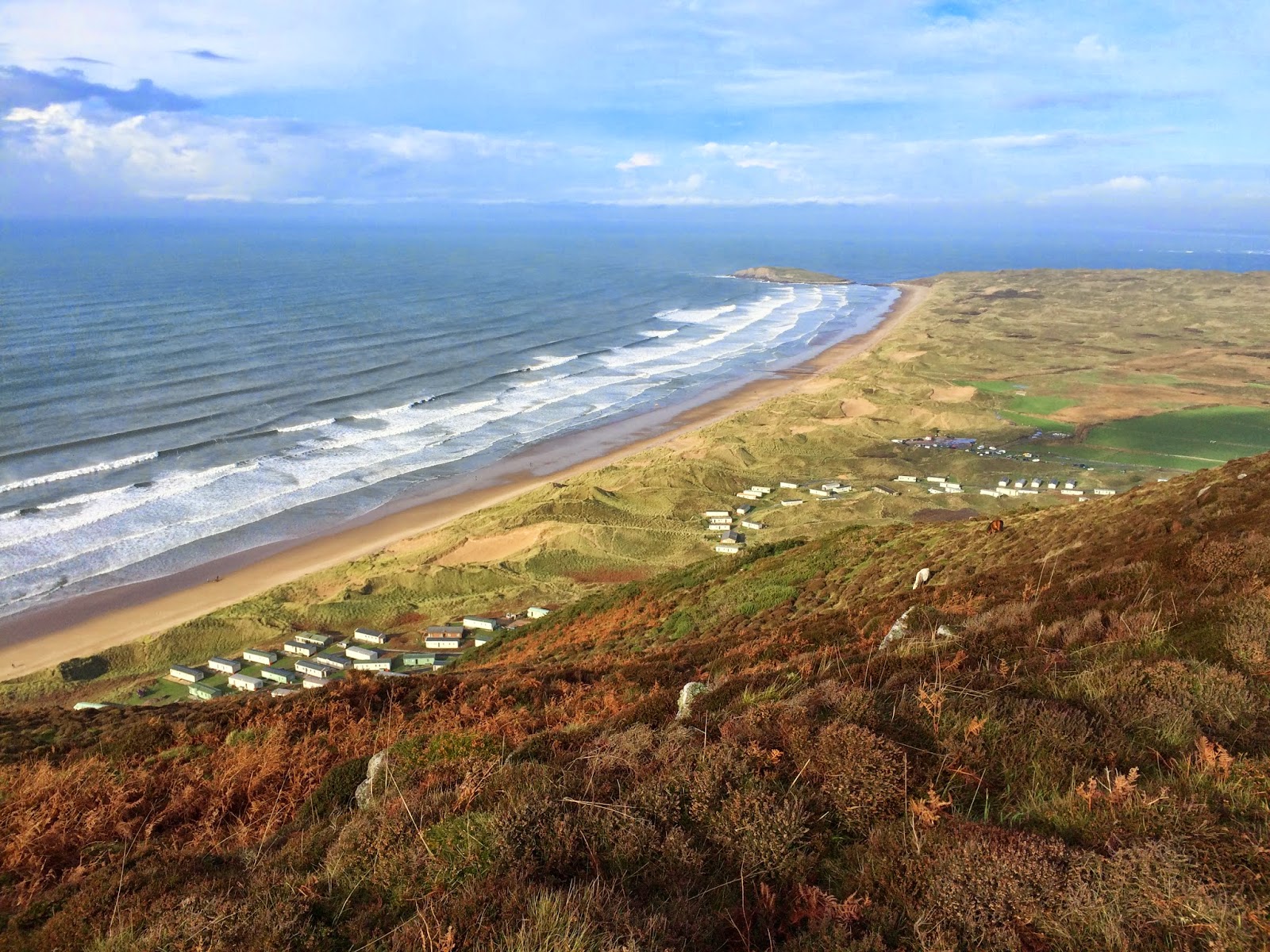 Looking down onto the beach, the descent to get there was hilarious! 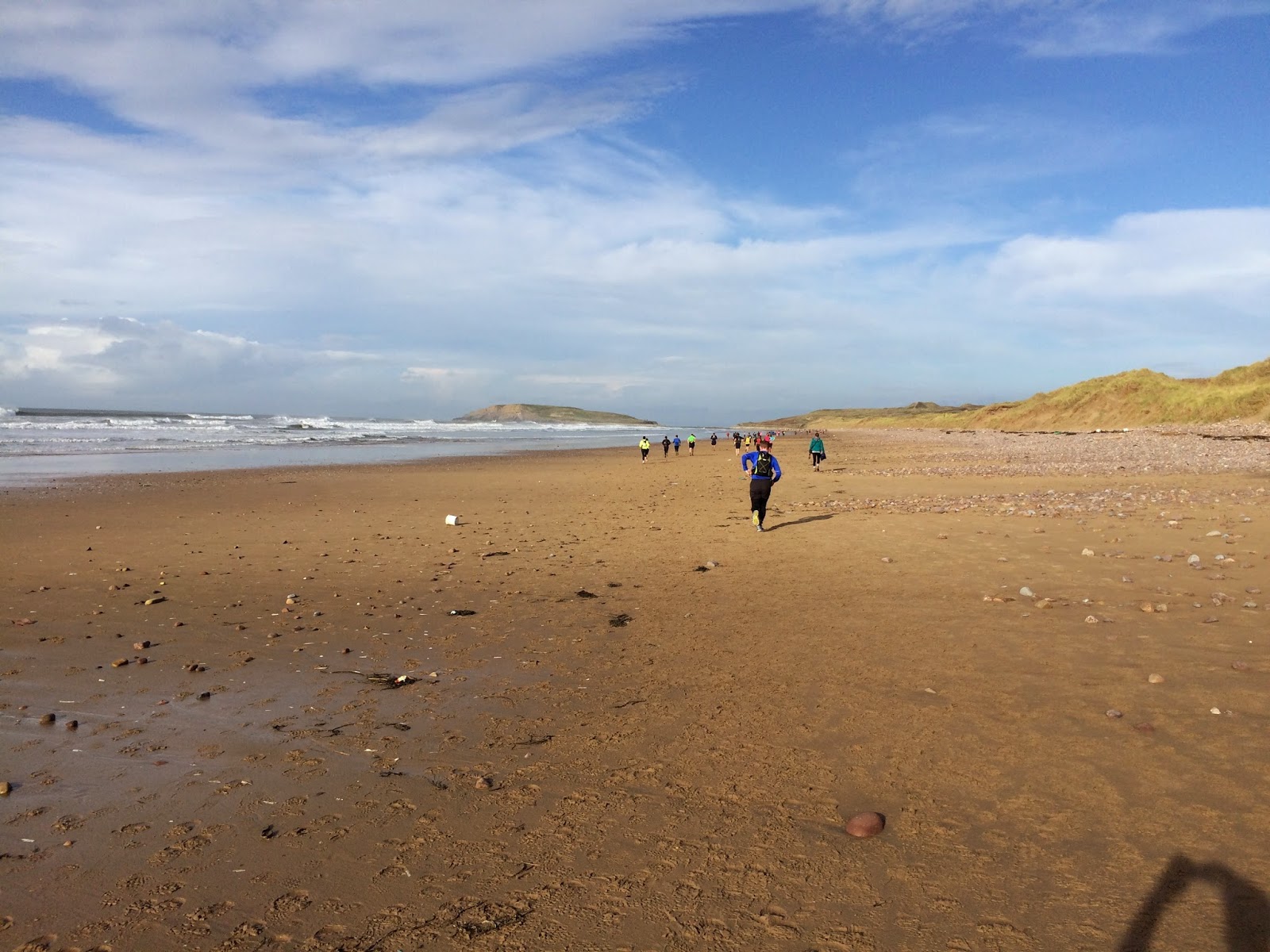 The beach section, energy-sapping but sunny and bright

At about 15km I felt a familiar nagging pain in my knee, but the terrain and pace were so varied I didn't cause much of a problem. I particularly enjoyed a long grassy downhill which gave us an opportunity to stretch out our strides and enjoy the view. And there were some great views on offer, the day was mainly bright and clear - I had been worried about rain, the long-term forecast was hinting at a deluge on Friday and Saturday but in the end it contained itself to Friday. 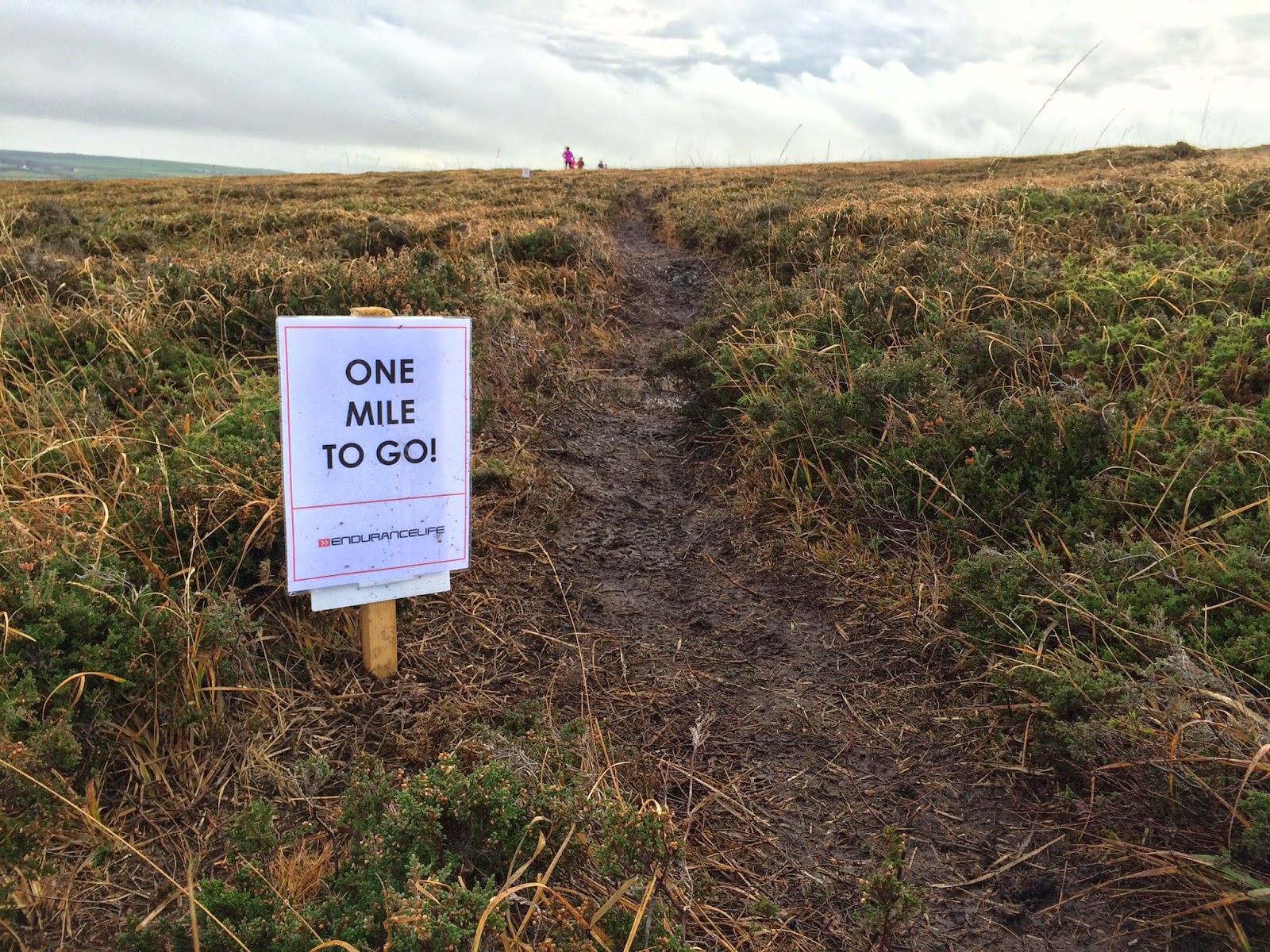 The last few km were across a bog, this was quite hard going on my knee and I was ready to stop - but before long the 1 mile to go sign popped up from nowhere, and I got a final burst of effort. Apparently this was "much drier than last year", which is fine in my book, it was still ankle-deep in places. Finally cresting the last hill (after a call of "Cheer up, you're having fun!" from a random supporter) it was downhill back into Middleton to the finish. I opened my stride once again and made a few places, and took a few more still on the final run in to the line. 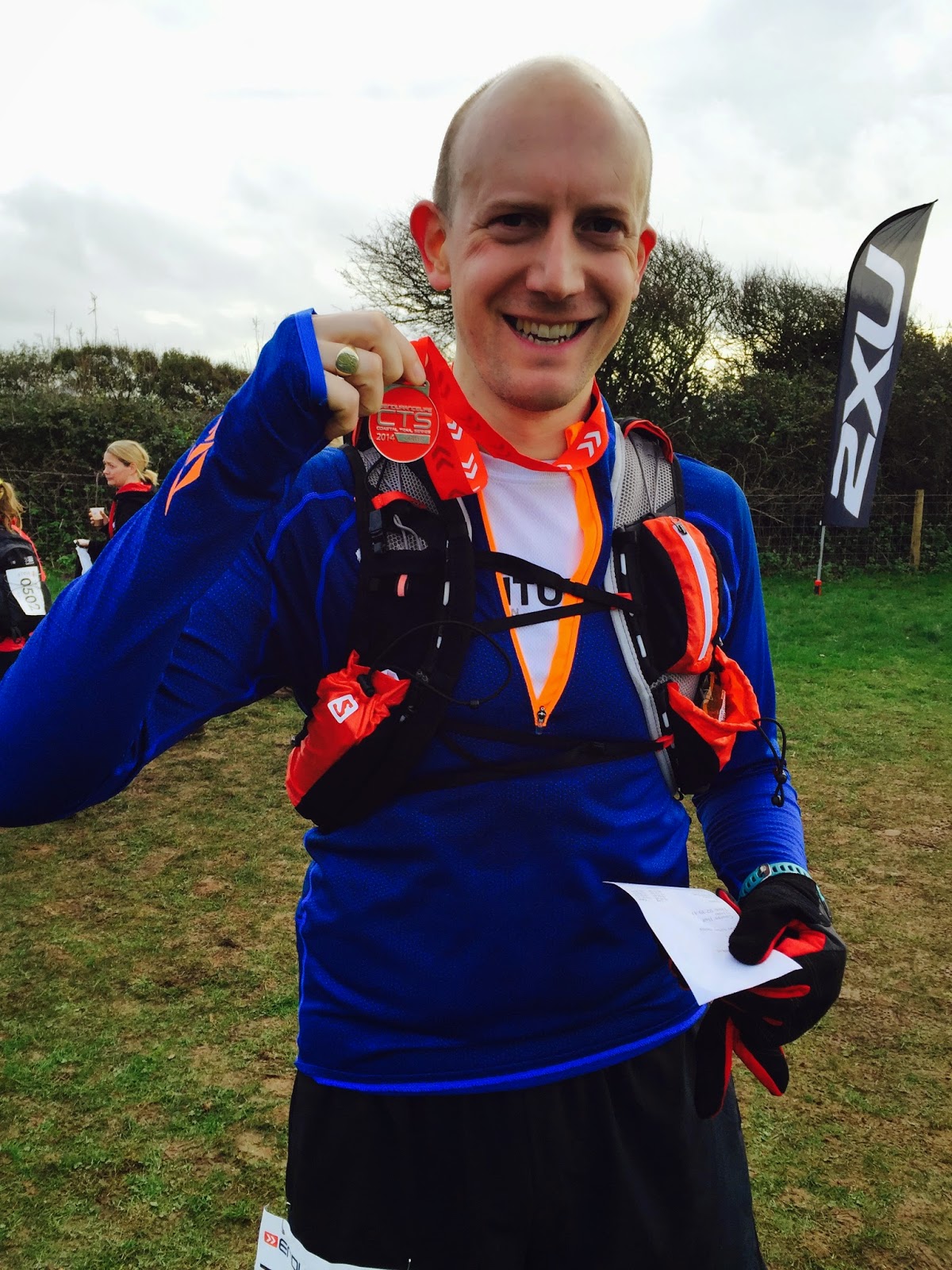 Overall time was 02:39:47. I wasn't sure what to expect and was aiming for anything under 3 hours, so I'm happy with that. Course length was spot on, my Garmin read 21.1km precisely. The knee flare-up is annoying but maybe predictable given my lack of experience on the terrain. I'm writing this the following day and apart from the odd twinge the knee is fine. Got a good few muscular aches though! Glutes, calves, quads, hamstrings - all took a beating. 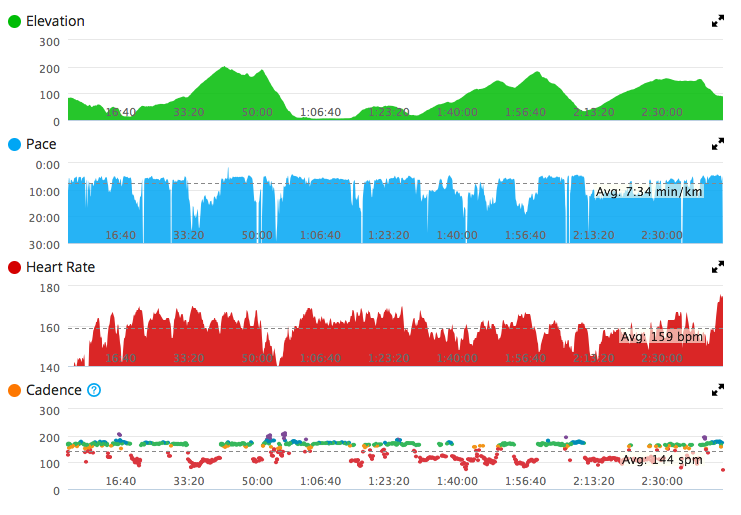 This was a good learning experience, I'm very pleased I took this on and didn't go straight into Dorset not having completed a trail race. However, some concern that this is a "3/5 Strenuous" on the Endurance Life scale, and Dorset is "5/5 Extreme" - 3 weeks to go to Dorset (and why am I already looking to see which other races in the series I can make?!)...
Posted by Norm at 19:03