I joined Mrs on one of her pacing sessions yesterday. It's a fairly well established format, in fact there was an article on Triathlete Europe recently (that I can't find now, unfortunately) covering the principle.

This session was a warm-up of 15 mins easy jog, then 5 repeats of 3 minutes at half marathon pace, 2 minutes at 10km pace, and 1 minute at 5km pace. No rest. After that, a 10 minute cool down. I looked on google maps satellite view to try and find somewhere flat - this is not a session to do up and down hills. 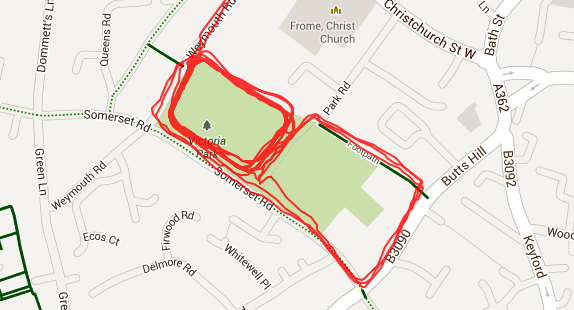 Flatish park, bit of a dip down at the South corner

I took some guesses based on recent performances that a realistic target half marathon pace is 5:30/km, 10km pace is around 5:00/km, and 5km pace a speedy (for me) 4:30/km. A bit hopeful maybe, but the session is about awareness - there should be a measurable change in speed with each stretch.

The first good news is that there was a clear difference in my pace.

Pace in each segment plotted across the 5 repeats

However, I was generally slower than I was aiming for. Whether this is due to poor pace awareness or not setting realistic goal paces is the question. Right now, I suspect a bit of both. The number of right angles in the course we were following wouldn't have helped either.

It didn't help that the park I found wasn't entirely flat, there were some gentle hills - but I can't really fall on that too much as an excuse. The trend lines tell the story - I was generally slowing down - apart from the 5km sections where it felt like I was going to vomit up a lung.

The repeats are clearly visible - peak at 175bpm on rep 5

An interesting experiment. I will repeat this session regularly until I can more accurately gauge and sustain paces - it's an incredibly useful skill to develop.
Posted by Norm at 19:31