I am what I eat

I mentioned in my slightly cathartic last post that I'd lost control a bit (a lot) on the weight front. Let's look at that a bit more closely.

Last year when I moved to LCHF (Low Carb High Fat) eating I lost a lot of weight (around 6kg) rather dramatically - this is expected and is very well recorded.

Absolute carb intake against weight for Nov & Dec 2012 - Christmas is where it started to break!

I was logging everything I ate and drank. I was keeping relatively close to my self-assigned target macro nutrient profile of 75% calories from fat, 20% from protein, and 5% from carbohydrate (note that there isn't an absolute calorie target - this isn't a "calorie counting" plan). 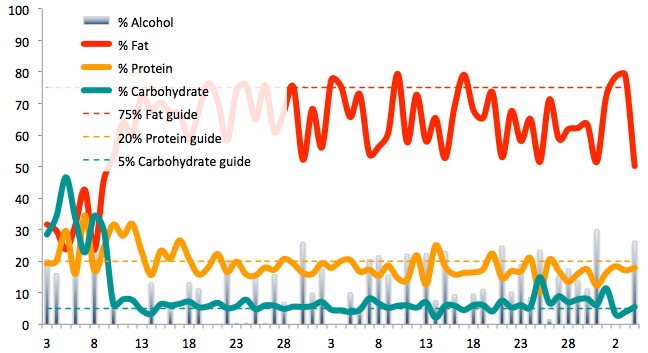 Macro nutrient split by % - no crazy carb binges at all, but a lift at Christmas has an impact

The decline continued until just after Christmas. I decided I needed a break from hyper-focus on logging every mouthful (I was taking a general break from being quite so analytical about food, training, exercise), and reckoned I was settled in enough to LCHF to "freewheel" (after all, they say you can eat as much as you like, right?).

There's also a well recorded phenomenon of weight gain on an LCHF diet plan if you over-ride (accidentally, or on purpose) you satiety signals. That is, you (continue to) over-eat. The reason you can "eat as much as you like" and not need to calorie count on LCHF is because the high caloric density foods give you a good clear "I've eaten enough" signal at the right time, and you listen to it.

It is possible to ignore that signal. I think I do, mainly unconsciously but occasionally as a result of a bad decision - particularly on the few days I've committed wilful "carbicide" courtesy of Dominos (and the fastest way to gain weight is the worst of all worlds, high fat, high carb, high protein, high calories - way too much of everything!).

My weight whilst "Freewheeling" from Jan to mid April 2013 - Argh! Stop climbing!

It's nothing to do with exercise - I was actually getting marginally more exercise into Q1 2013 than I was at the end of 2012, but was gaining weight. Why?

I decided to start logging my food again on Saturday, and it was instantly apparent what the problem was. The caloric density of my meals was far far higher than I though. Here are some examples:

The macro split isn't too bad - there are just way more calories than I was accounting for. Compare that with what my previous low fat, high protein diet used to give me. 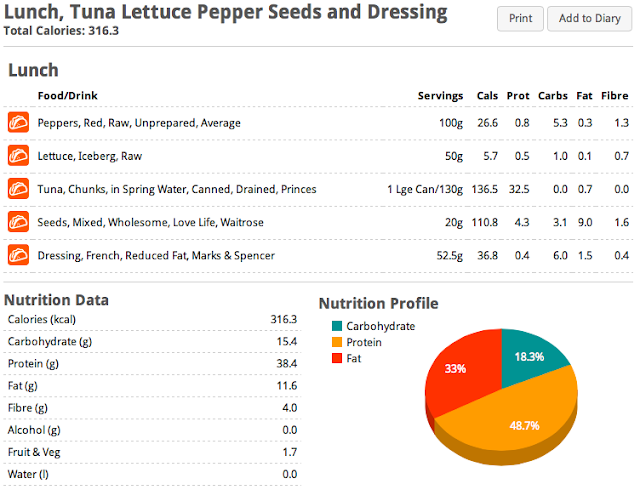 A typical lunch from last year - it's no wonder I was on 4-6 additional snacks per day!

The problem was that I was augmenting these meals with occasional other (high fat) snacks, and - importantly - a full cooked dinner (all be it still on the LCHF theme). Over the last few weeks I lost a lot of control and was enjoying a nice big slice of cake from the coffee shop with my coffee at work, and even caught myself making a couple of slices of toast with peanut butter at work (it was lovely, but I felt terrible afterwards). High everything.

During this fortnight I was feeling more and more ill in my stomach, like there was a toxic buildup. I didn't feel actively sick apart from once or twice, and there weren't any problems with, er, "waste", I just felt terrible. Bloated, laden, heavy (feeling heavy as well as being heavier). I felt like the handbag on the constipation commercial where the troubled lady just keeps on ramming food in (I had a brief look for it on the YouTubes but I don't want to end up being followed around by constipation ads so I stopped).

I also don't think it's any coincidence that I have had a sore throat and heavy cold over the last week, the first trace of illness I've had since going LCHF in November (and I always have a cold at Christmas/New Year). I certainly made the right call last Saturday to restore some greater awareness.

My first day of logging again.

On my first day of logging I hardly ate anything compared to recent weeks. Ignore the "-61" in red - that's a hangover from last year where I had WLR set on a daily calorie target deficit of 500 calories under that which I should need to maintain my weight. Looking at calories only is a flawed approach, but you can't ignore them all together. That's what I've learned this year.

A real eye opener as to how little I needed to eat to reach these numbers. And Saturday I felt much better, and the day after that, better still (apart from the cold, which I'm only really just shaking off now).

I'll stay on alert for a couple of weeks and see what happens to the weight graph. Since Saturday (5 days) it's already dropped by 1.3kg. I'm astounded I shot up to 86.7kg, almost around 9kg heavier than my minimum before Christmas - that was only three and a half months ago!

So, since I hit the reset button on Saturday I've felt much better. And you know what? I've been more productive at work, my brain is quicker and more useful, and I'm feeling positive - hmm, just the feelings I discussed the first time I went LCHF. No coincidence.

Look after yourself, eat well - you are what you eat.
Posted by Norm at 21:07