An incredibly busy period at work means that it's been hard to find time to talk about my training, but try as it may work hasn't stopped me getting out and getting some miles in. Running and cycling have gone well, swimming has been my challenge, but it's starting to come together - albeit slowly.

Secondly, let me start out by saying I love the sprint tri series organised by Thames Turbo Triathlon. There are 4 held each year, on every bank holiday Monday. I completed them all in 2010 and 2011, and today was the first of 2012. They have a great atmosphere, and feel really inclusive - particularly to first timers. During the race briefing the first-timers are asked to raise a hand - it seems like there are always about 1/3 first-timers. I love events like this - a fun mix of those not knowing what to expect and being there for the challenge of the event, to groups of enthusiastic amateurs trying to set a new PB or shave a few seconds off transition (I'd put myself in this category), right up to accomplished club athletes who are there to stamp their authority all over proceedings.

Last year Mrs and I were caught out when we learned that Race 1 in the series was also the first race in the London League - so there was a really strong field. This year was the same - so there were a few more lean and serious looking athletes around, as well as a few more spanky bikes with trick bits and disc wheels than usual!

My training this year is targeted towards the 4 Ironman races, but this sprint series represents a good general fitness data point, and I'm hoping to see an improvement over last year given I have 3 months of focussed training in the bank, and over the last two years I'm not sure I've even managed 3 weeks of sustained training effort.

There are a few changes in the course this year. Transition is in the same place, but Swim In, Bike Out, and Run Out have changed sides. This makes for a slightly fairer and more logical route through as you move from left to right twice - picking your bike up the first time, and dropping it off the second. The swim, run, and bike courses were all the same (if you want to be picky, run was very slightly different as a corner had been cut and a few metres added on to the finishing straight to compensate, but there's no need to picky now is there?).

You can now register up at Hampton Pool between 5pm and 6pm on Sunday night. This should alleviate some of the bigger queues in the morning - it did get quite crowded at times and this year they are allowing slightly larger fields. We drove up to pick up our packs (wrist band, race number, bike and helmet numbers, and the all important timing chip) and the place was packed. This would have been a big help to organisation in the morning. 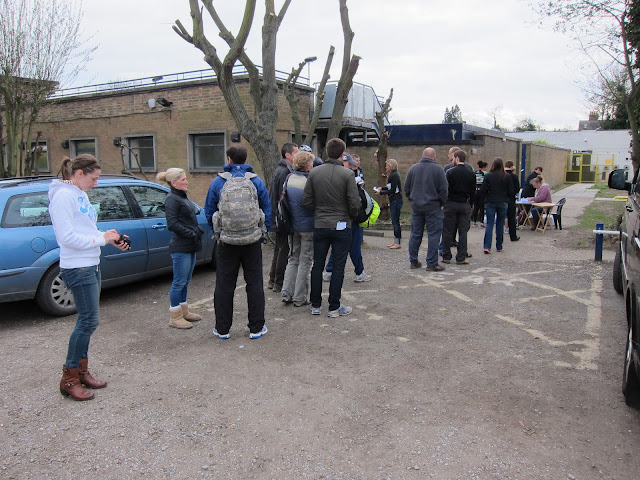 The timing chips have been mooted for some time, and it's great to see them now deployed. They placed sensor mats at T1 entrance and exit, bike finish, T2 exit, and run finish - this means we finally get splits for each discipline individually, as well as both transitions. An excellent improvement (previous manual timing meant we got three splits - swim + T1, bike, and T2 + run) , thank you Thames Turbo.

Race day comes around, and we're up at 4:50am for some porridge. The weather was not kind. On top of my tri-suit I wore bib-tights, long socks, a long sleeved base layer, a fleece jumper, and then winter gloves, overshoes, and a waterproof outer layer. I was dressed more for an arctic expedition than a 35 minute warm up ride to the event. With Mrs pulling off a similar Michelin Man impression, we set off - lights a-blinking from makeshift mounts. 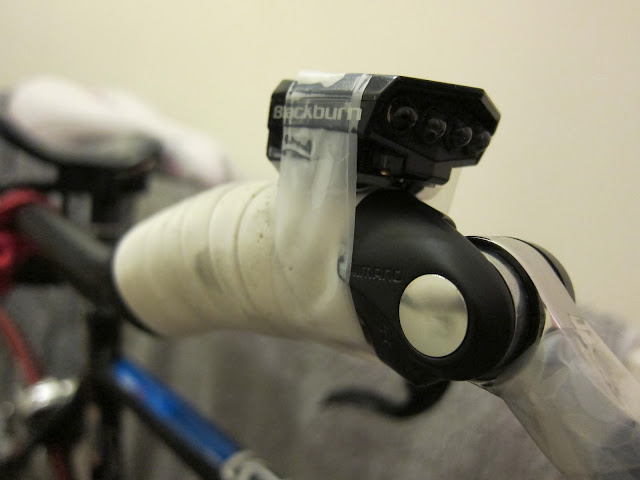 Tri-bikes are not designed for easy light mounting

In short - it was cold. Damn cold. And very rainy. And cold. As I was queuing for my swim start I seriously thought we'd made a mistake not leaving clothes to put on during T1. It takes a long time to do this, but it's better than freezing to death! Anyway, too late now. I watched Mrs start, she seemed to settle quickly and be swimming well. I noticed the first few exiting T1 with long sleeved tops and waterproof shell layers on. I fretted a bit.

My swim start came, but with about five people left in front of me the timing start broke, so we were held for a few minutes while they got it sorted out (it was too wet and so the touchscreen stopped working - a replacement was quickly found).

When I finally stepped into the 28C heated pool it felt like it was boiling thanks to the differential with the air.

My swim was poor. I set off and within seconds lost form, regressing immediately back to my old stroke - but as I hadn't been swimming like that for months, I was uncoordinated and inefficient. I failed to tumble turn at the first turn (in the deep end) as I had no gauge as to how close the end was, and by the end of the second length I'd already been overtaken by the person behind me. I focussed hard on trying to think about what I was doing, and did get some rhythm back - but it's clear I need practice, practice, practice to really ingrain my new stroke. It's not there yet. I lost another 3 or 4 places in the first half. My breathing stayed controlled and I wasn't getting tired, so at least I was being slow efficiently! Swim time was 08:31 for the 12 lengths (432m).

T1 took 01:00 on the clock. I had decided to try attaching my shoes to the bike, then holding them in place with elastic bands. This meant a quicker T1 as you don't have to put any shoes on. Instead, once you've set off on the bike, you slide your feet in. The theory is that if you put your shoes on while you're moving, it'll be quicker than putting them on while you're stood still. It was still raining heavily, so my helmet had filled with water and gave me a cold splash as I flipped it onto my head. Thanks, but I'm already awake.

Off into the rain for the bike leg. I got my shoes sorted out and settled down for the 20km cycle (actually about 21.5km). The bike felt good. Really good. My position has felt a lot more comfortable on the couple of training rides I've had this year - I suspect due to having a lot less round my middle (I'm 6.8kg lighter than race 4 last year, and a massive 11.3kg lighter than I was for race 3 last year). I kept my cadence a little higher than I have had in the past - for triathlon cycling if you can keep your legs turning over a little faster than you would when doing a straight cycle time trial, it should help in the run, particularly at the outset.

I was going fast. It felt really fast. I flew past quite a few people (I don't know how many). Stayed on the tri-bars almost the whole way (exceptions being to brake for a car, and to make the two 180 degree turns at the end points of the course). In previous races I've felt my power decline over the last 10 minutes of the ride, but not today - I felt strong and even found myself pedalling out a bit (when you can't pedal fast enough in your gear for the speed you're going) and so notched up a gear or two to really push to the end. 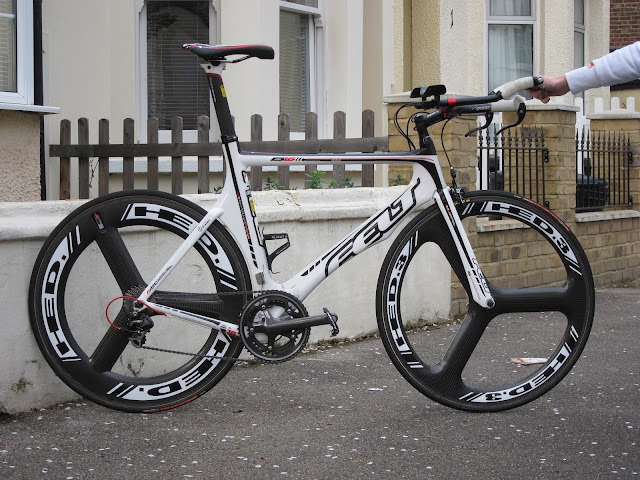 My time was 35:08 - a massive 01:12 off my previous best. I don't get speed/cadence data from the polar I wear for racing which is a real shame, I would have liked to see a comparison of this race with the last. I suspect the speed would have been comparable for the first 1/2 to 2/3, but then sustained rather than dropped off. I also feel like I was in control of breathing and heart rate during this leg, and I suspect was riding more efficiently. This is good news when there's a run to come, traditionally where I come unstuck.

The Thames Turbo races have a peculiar idiosyncrasy in that the bike finish is a km or so from transition, and therefore there's a "non-compete zone". This permits a maximum 7 minutes from passing over the bike finish timing mat to get back to the pool and pass over the T2 start mat. A smart competitor will take full advantage of this time to drop into a low gear, spin the legs round, and get your heart rate back down.  I caught Mrs right at the end of the bike, so we bimbled up through the non-compete together. As a result I took almost a bit too much advantage of this and clocked 06:51 in the non-compete zone. If you go over 07:00 then the clock automatically restarts and the time is added on to T2.

My T2 time was 01:06 - mainly due to my hands being so cold I couldn't get my running shoes on properly, or unclip my helmet. Got there in the end, and off for the run.

Over the last few months I've been working hard on my running technique and developing a more mid-to-forefoot strike. This reduces the shock and pressure on your legs when you run, and also supports an increased cadence and more efficient style. As a result I decided to get some lighter shoes with a little less heel cushioning for short distance races. I picked up some Brooks Racer T7 from Sweatshop using their now, sadly expired, buy-one-pair-get-another-for-£25 offer. This was their first proper race outing, and I was not disappointed.

I managed a quick turnover right from the start, I felt light on my feet and strong (despite the freezing cold and rain). I kept good cadence for the run, and even overtook a few people (normally people stream past me on the run - all the people I'd overtaken on the bike!). I hadn't thought about my watch at all - but remembered it just before the 4km marker. I had a quick look, it read 01:09:something - I knew I'd spent about 6:45 in the non-compete zone. Therefore I had about 6 minutes to finish, and still get in at under 01:10:00. I started to think - 6 minutes was generous for a km, if I could get in under 5 minutes I may even break 01:09:00 - that was my "wildest imagination" time! I pushed on - and really opened up over the last 500m, putting everything I had into the last couple of hundred. Race over. But what was my time?

I waited for Mrs and we walked back to the pool - both of us shaking with the cold. We warmed up and grabbed a cup of tea. I noticed a timing tent on the roof patio, so we went to investigate. They had a terminal where you put in your race number and a little thermal printer outputs your splits and provisional timings. This is what mine said: 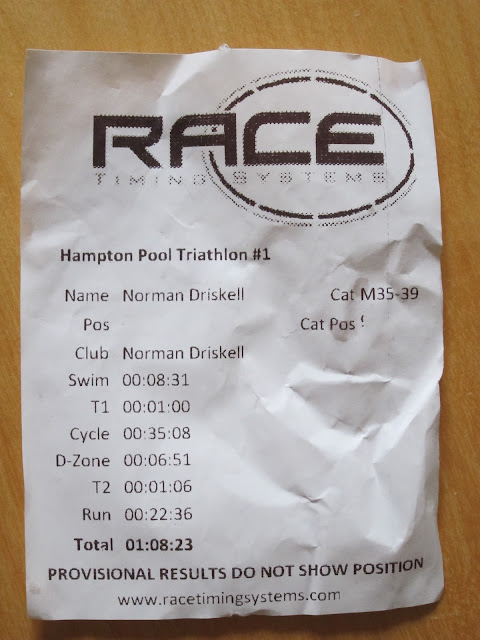 Check out the online results tool!

A fantastic first triathlon of the season. Thanks Thames Turbo, thanks Marshals (all 60 of 'em!), and thanks Mrs for also being into this crazy sport that means we both have someone to get up with at 04:50 on bank holiday Mondays in the cold and rain.
Posted by Norm at 19:46