I'm a relative newcomer to triathlon, but already there are three individuals who have never ceased to affect me with their dedication, athletic achievement, mental strength, and utterly inspiring performances.


This week I am lucky and honoured enough to be meeting them all.

Since just before Christmas, AudioFuel have been running a promotion on twitter. Donate £5 to Challenged Athletes Foundation and be entered into a draw for a ticket to an audience with Chrissie at a bike shop in London where she was to launch Tri Harder, a new collaboration between her and AudioFuel, and then hold a Q&A and meet and greet, pose for photos, and give out autographs.

Me and Mrs entered and thought no more of it until last Friday I got an email telling me where to be and when! What a great start to a Friday. Mrs checked her mail and didn't see one - awww, it's OK honey, I'll take some pics and get something signed for you- but no! There it was! Mrs was coming too - it couldn't be any better.

So on a pleasant and mild January evening we made our way excitedly to a bike shop I hadn't been to before called Bespoke Cycling [@bespokecycling] in Farringdon. I'll definitely be going back, there's a large quantity of bike pr0n there to be drooled at. There were 100 tickets available, and there seemed to be about that many there, give or take a few. I don't know if the event was oversubscribed, or by how much, but it was clear we were going to get a real up-close and personal experience. 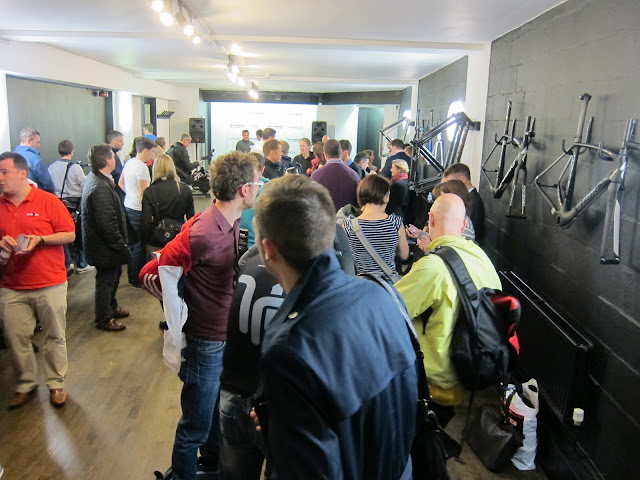 The cleared out downstairs showroom at Bespoke Cycling, Farringdon

Chrissie started off with an introduction to her AudioFuel workout sessions - a preparatory piece to get you in the mood before you head out "Lace-up with Chrissie", some big cycle and run sessions "Run Faster" and "Bike Harder" both available in different workout durations, and a relaxation mix called "Relax with Chrissie" for winding down and visualisation during rest periods. 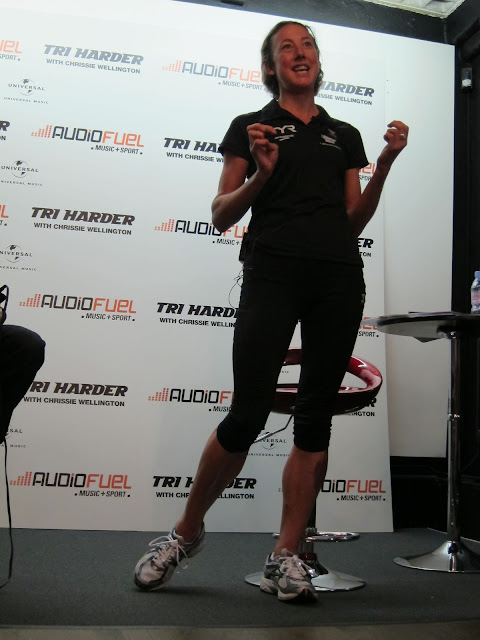 A trainer from Barnes named Elly did a demo on the bike, and then Chrissie took to the treadmill. The chap from Audi Fuel who was on the mixer let her have about 30s of warm up, and then jumped to one of the 30s intervals which she took at 18km/h. Although she was clearly needing to work to sustain 18km/h, the fluidity of her running was astounding. There was no unnecessary movement, she was perfectly aligned, and it looked biomechanically very efficient. I'm no sports physiologist, but it's clear she has an enviable aptitude for running - which explains her phenomenal run at Kona last year, and why the press ask her if she plans to take on the marathon at world athletics level. 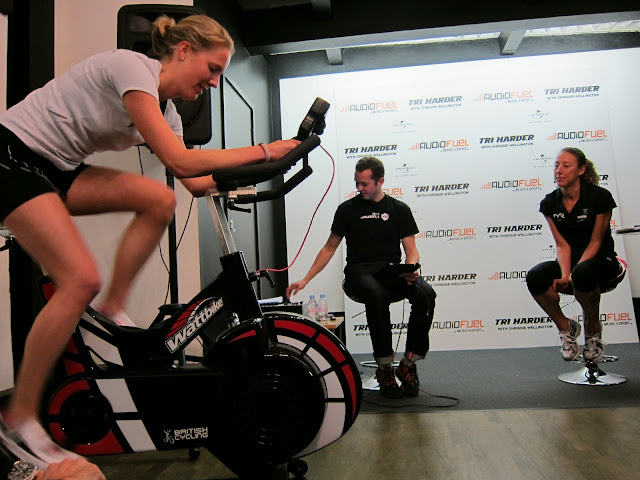 She then moved to a Q&A session to the audience and fielded questions about winter turbo training, when to use the Audi Fuel sessions, her state of mind during Kona, and many other topics including a couple via twitter. She clearly relaxed during this part of the evening and seemed much more comfortable fielding questions than fulfilling her marketing obligations. She gave long and detailed answers, and I felt shared some truths about her 2011 Kona race and her psychology during the event. Chrissie learned that day what it was like to stand on the start line and genuinely not believe that she was going to win - and as undefeated over the Ironman distance that must have been a tough lesson. She was racing against herself, to do the best she could. As the race panned out though, and she moved up through on the bike and then reeled people in on the run, it became for maybe the first time for her a real genuine race - she had to give it everything to catch and beat Miranda Carfrae in the closing stages. She gave it everything to do that, and it made for a wonderful experience as a spectator, and the victory even sweeter for her. 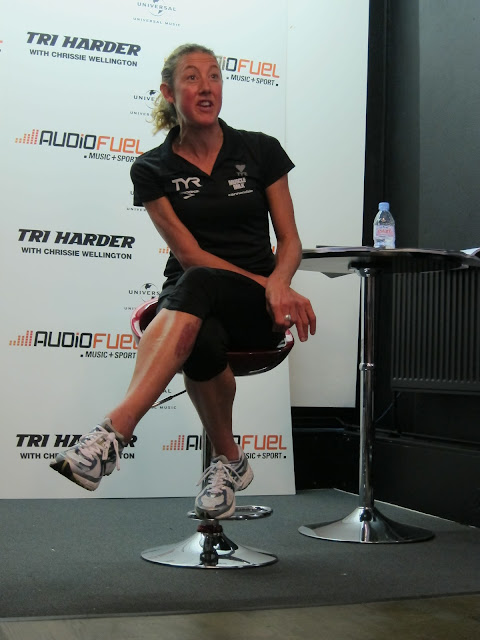 Chrissie taking Q&A from the audience

I asked the last question, it was along the lines of:

I've entered IM Wales as my first full Ironman distance event. Do you have any advice for the excited first-timer?


Chrissie explained that with Ironman distance racing, as it takes so long to prepare, you have to enjoy the journey. Don't focus too much on the day - particularly this far out - but think about your training, enjoy the progress, get your build up races booked in, and find where your limits are during training. Don't fall into the trap of thinking you need to do tens and tens of hours per week, make each session count.

Good advice. I need to stop thinking about Wales at this stage, it's just too far away - instead focus on consistent and productive training. I've never managed to sustain a set programme for more than about 3 weeks in a row before. That's my biggest challenge right now.

Following that we queued up in a mainly orderly fashion to get an autographed poster, and exchange a few words. Again I was struck at how personal she made the experience, Mrs and I were talking to her for what must have been a couple of minutes at least, and there were 80 or more in the queue behind us. I hope they all got the same opportunity. 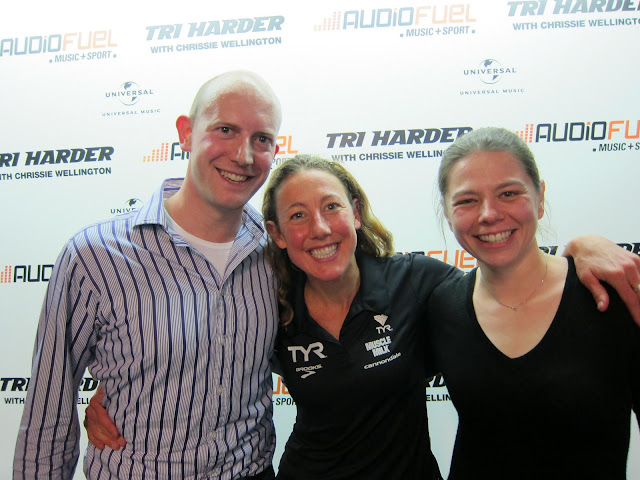 Following that excitement, we went off to Ginnan chinese restaurant and had lovely pork and vegetable Gyoza followed by Chicken Katsu Curry. Our first meal since quitting the booze. No beer didn't seem to be too much of a problem, and it made the price a nice surprise!

What an amazing, inspiring, and motivating day. I feel privileged to have spent some time in the company of Chrissie Wellington, and I'm sure I'll be talking about it for quite some time (do stop me if I bang on about it too much though).

Oh, and me and Mrs are off to meet the Brownlees on Friday, but I'll tell you all about that at the weekend.
Posted by Norm at 14:51