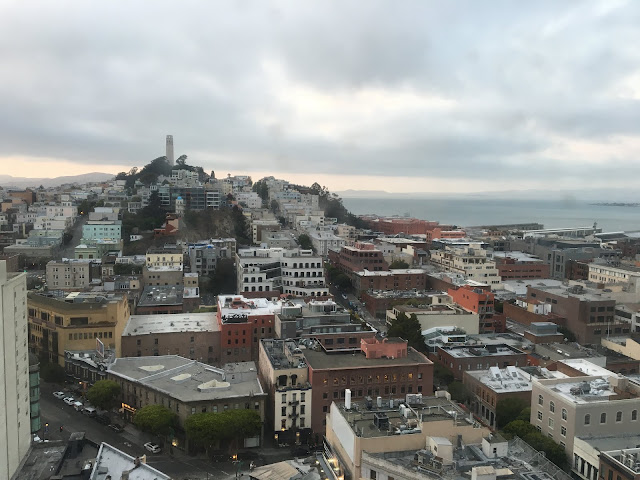 Mrs is over here in California fairly regularly with work. I've always been envious of her runs at Crissy Field parkrun, in the shadow of the famous Golden Gate Bridge. Well, this time I decided to come over with her and have a bit of an explore round San Francisco, Sunnyvale, and Mountain View while she worked. 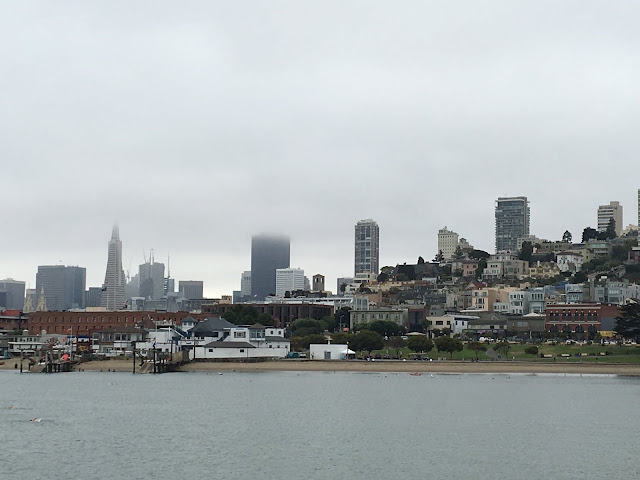 Looking back to the financial district


We are staying in the financial district of San Francisco, which makes for a nice 5km warm up to get to the start.

For some reason I thought this was to be my 199th parkrun. When the event director asked if anyone had any significant runs today (50th? 100th? 200th?) I even called out "does 199 count?". It wasn't until I received my results email I saw that I'd run my 200th parkrun without even realising! 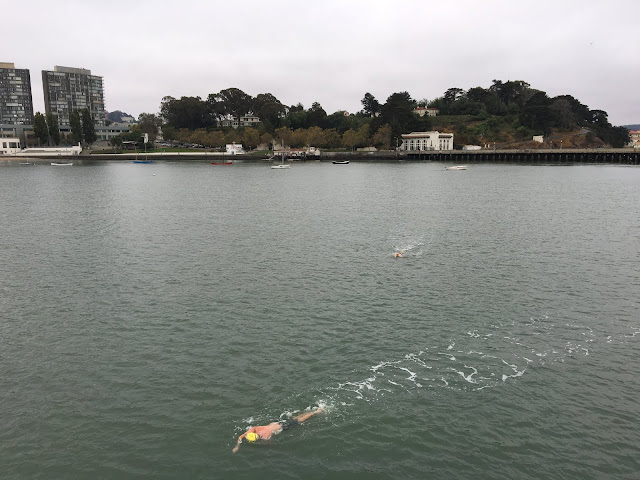 Brave swimmers in the bay, wouldn't catch me in there without a wetsuit 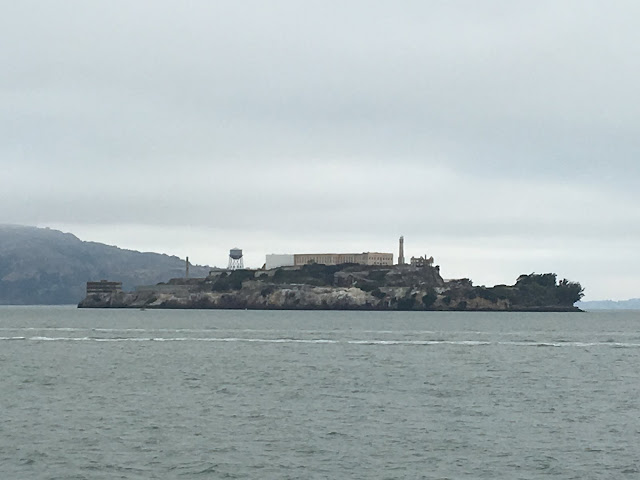 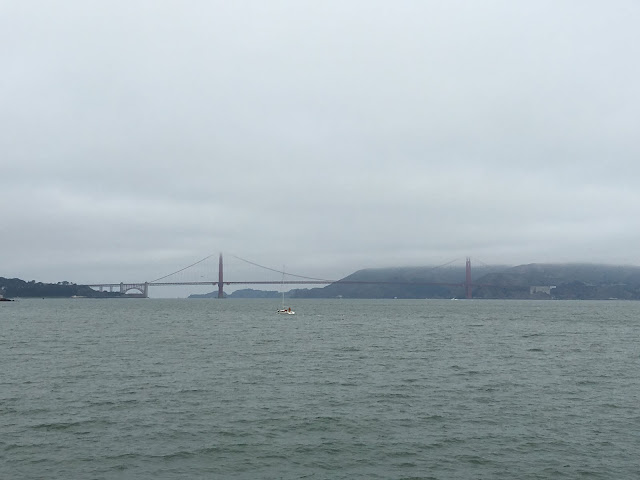 Today there was "another event in the park" (parkrun parlance for when a parkrun is cancelled because something else is going on - such as a big race, fun fair, or show). Crissy Field organisers are not dissuaded so easily and the run went ahead, we simply set off in between two waves of the other run - an easy solution, flawlessly executed. 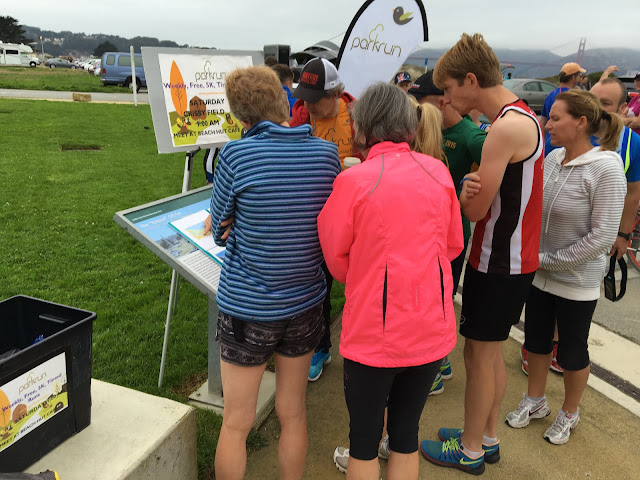 First-timers' run briefing, lots of tourists so plenty of interest

The course is an out-and-back promenade style route, with a folded P at the end. Kingston-upon-Thames is the closest that comes to mind. As it was down the coast it's flat and potentially fast, though there are a lot of other park users to be aware of so care is required.

The surface is 90% gravel and sand path with a short tarmac section at the turn-around. The surface is well tended, but hard to run very hard on as there's always a little bit of effort lost on each step with this kind of surface. 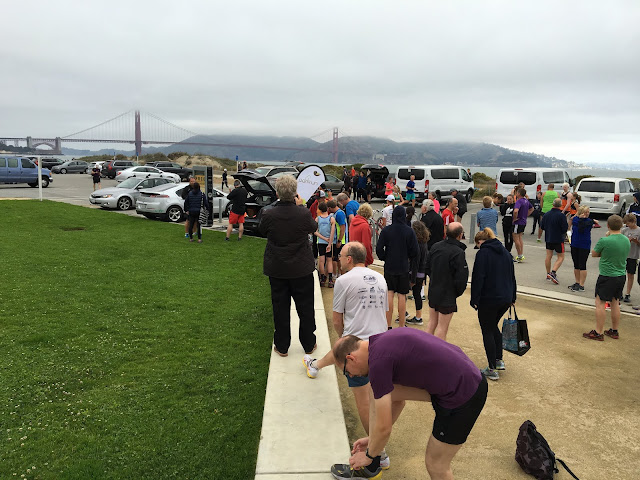 As always at parkrun, pacing in the pack was terrible, and most set off at full pelt only to slow significantly between the 2nd and 4th kilometres. I like this as it means there are people to reel in over the run - a good motivator to keep your pace up! 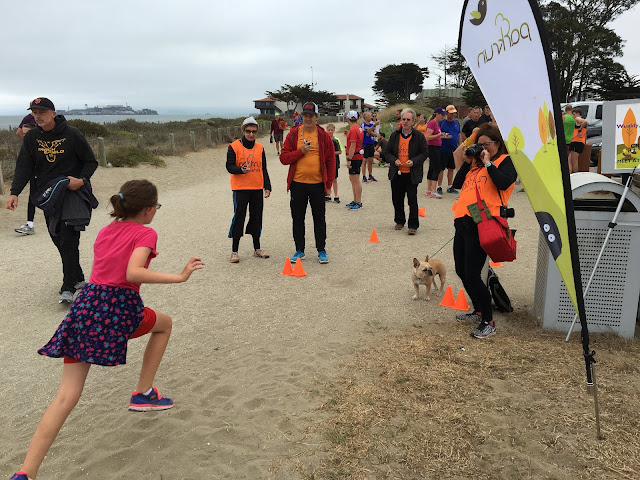 Someone putting in a big sprint finish effort!

The event team were very friendly and welcoming - they must have one of the most varied of all the parkrun populations, with the majority of runners being visitors (and predominantly from the UK). 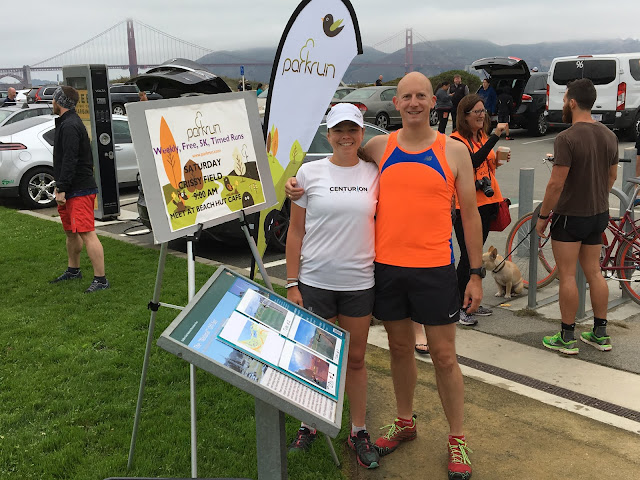 Won't lose me in that vest

The Crissy Field tail runner is the last person in the world to finish their parkrun. In contrast, whoever is the fastest finisher in the New Zealand parkruns is the first in the world to complete their run, over 20 hours earlier! 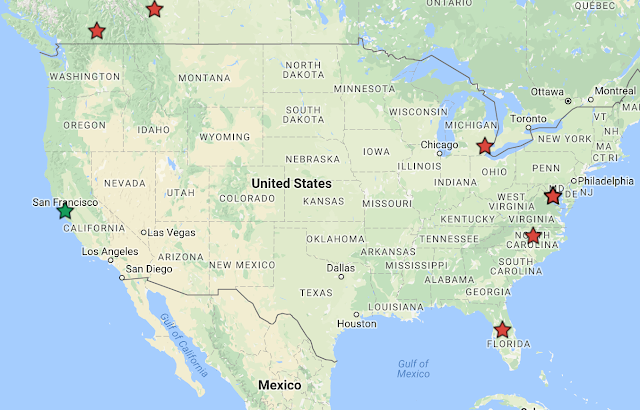 Super-happy to see a green star on my parkrun map in the USA!