Here we go again! This time it's off the mainland and over to the emerald isle for Ironman 70.3 Ireland in Galway.

It feels very different this time. Having done a 70.3 earlier in the year at Wimbleball, and then the full Ironman distance a few weeks ago at Bolton, I have no fear about the distance. I've learned a lot in the last two events, and this is the first opportunity I have to put it all together.

It's also the third of the four events in the Ironman Ultimate Challenge. At Wimbleball, the first event and my first 70.3 (half Ironman), the distance and the hilly course was the challenge. At Bolton it was my first full distance Ironman, and just getting to the end was the objective. Now I know (barring unforeseen calamity) I will get to the end tomorrow so my thoughts are turning to completion of the Ultimate Challenge. With this race, and then Ironman Wales in two weeks' time, the pressure is quite different - I'm starting to feel like I'm half way through a 13-week race, and tomorrow is the third quarter. It's a means to an end rather than an end in itself. My concern in the event of a DNF (Did Not Finish) here isn't that I'd fail to finish 70.3 Ireland, but that I'd fail the Ultimate Challenge. It feels like the stakes are somehow higher now!

As I was off jetting around the world last weekend I missed the Sunday and Monday of my bank holiday weekend. Therefore I took Thursday off instead, and me and Mrs decided to take a leisurely meander to Galway and split the journey over Thursday and Friday. After my last training session (an hour and a half on the bike, and thirty minutes in the pool) we packed the car and set off for North Wales. 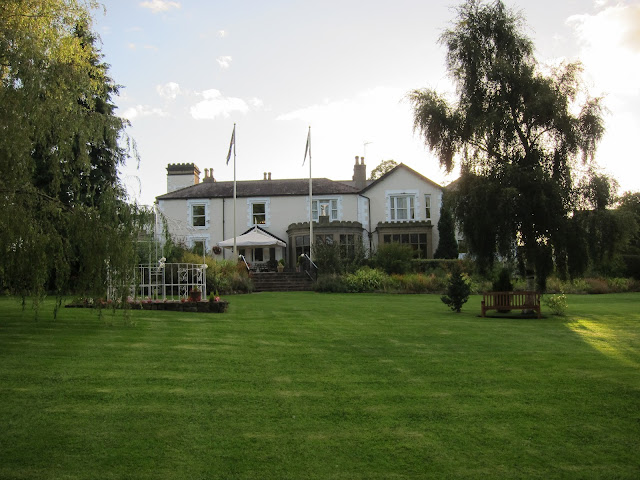 We stayed over Thursday night at Northop Hall Hotel, a nice little place that Mrs found

We had an uneventful drive to Hollyhead to catch the ferry to Dublin - this was certainly the right way to do it. Getting up at what would have had to have been 4am to drive here in one day would have sucked in the extreme. I needed a few sound nights of sleep - getting a good 8 hours the last few nights before a race can really pay dividends. It's not so much about the night before, indeed it's been shown that one night makes little difference to athletic performance, but the preceding 2-3 nights are definitely worth making the effort for particularly if there's a risk of a poor night ahead of race day. 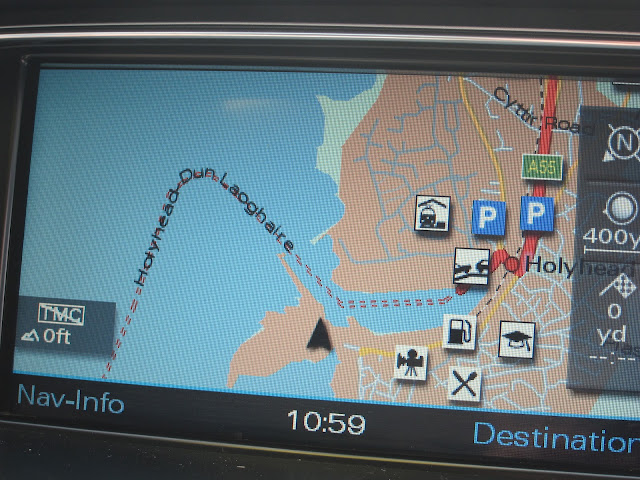 The ferry was good fun, I can't remember the last time I was on a ferry. There were lots of cars with bikes mounted on (in and behind) them, and an appropriate number of weathered triathletes making a direct line for the complimentary snacks. 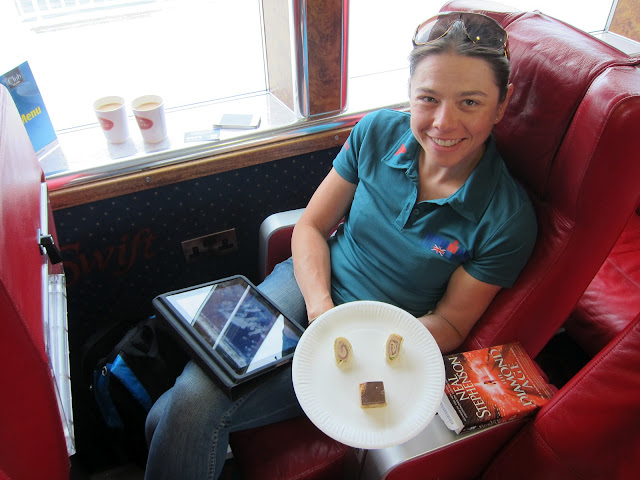 Mrs and her happy snacks (we demolished an order of magnitude more snacks than this...)

A relaxed drive across Ireland followed as Dublin and Galway are at opposite sides. We went straight to Leisureland for registration, and picked up our bags, numbers, and assorted paraphernalia. 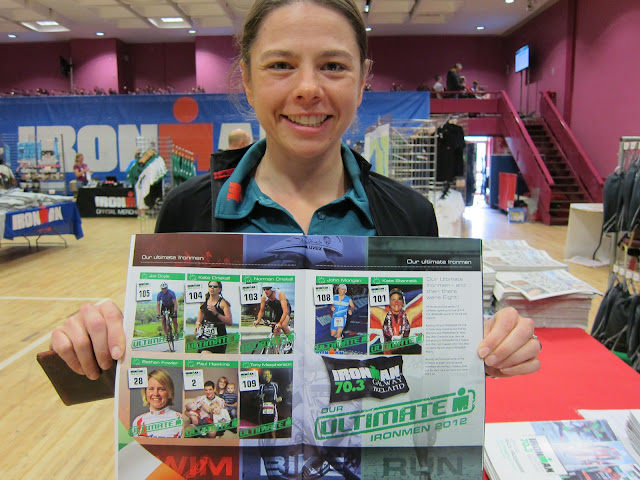 The Ultimate Athletes get another double-page spread - 8 competitors remaining 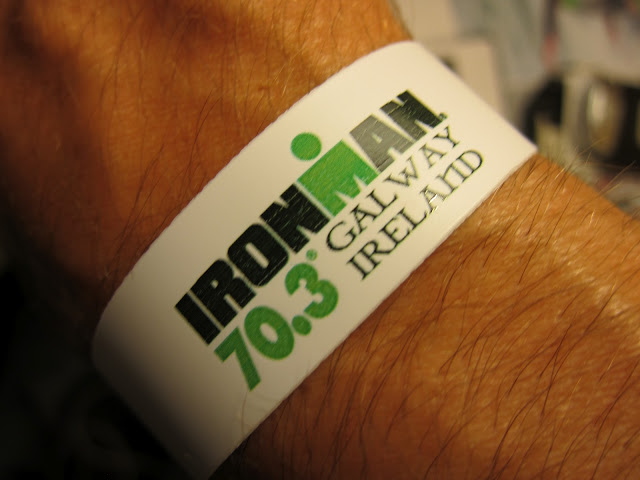 Another race, another wristband

We arrived at Sea Breeze Lodge (I can't be held responsible for the web site) late afternoon. The room is absolutely beautiful, a real surprise for what I was expecting to be a regular lived-in looking B&B. Everything has been recently redecorated, we have a big room with good quality fittings, very well presented common areas, and a warm welcome from the boss. 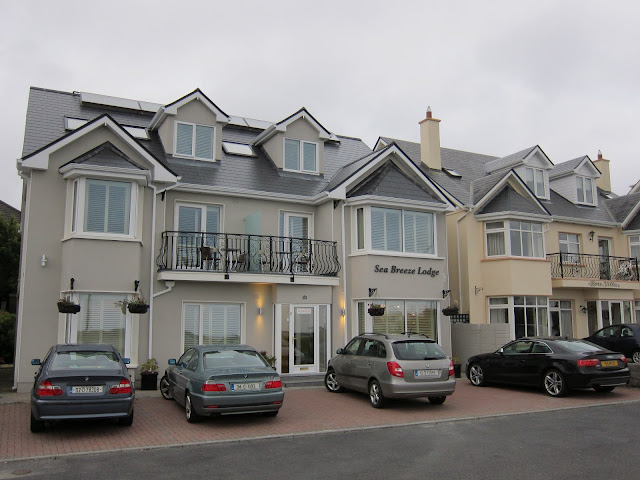 Sea Breeze Lodge, Galway - three locals and me the interloper!

We relaxed and got our kit ready for dropping off at transition on Saturday, and strolled up the road to Capone's for some dinner (a local Italian where parents take their kids to scream).

Kate and Charlie Stannet popped round at about 8pm and invited us out for a beer, so we went up to Tom Sheridans for a pint of the black stuff. A nice relaxing day, just what the doctor ordered.

Today was already well planned out. Get up, 15 minute run to 'get the legs turning over' (I'm not sure my legs turned all the way over, but I went for the run anyway). Then some light(isn) breakfast, and down to Leisureland for swim practice and dropping off of bikes and transition bags.

The sea was not as cold as I'd feared. We swam out and back a couple of times, about 20 minutes in total. Wind was up a bit, but the waves were manageable. Tomorrow is due to be calmer, so I don't think the swim will be too bad for my first race sea-swim.

One of tomorrow's challenges is fast and efficient transitions, so I'm going with the bare minimum of stuff. 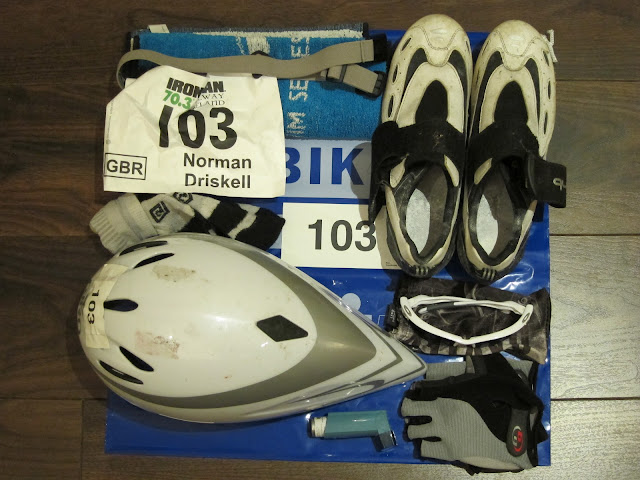 Blue bike bag for T1 (I need all of this stuff, but there's nothing extraneous here) 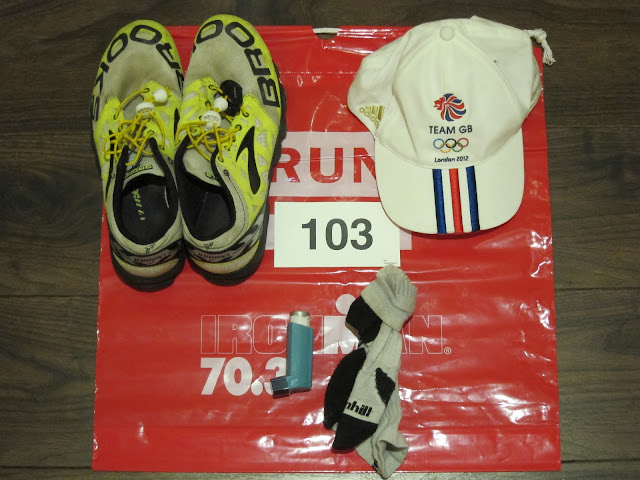 Red run bag for T2 (socks, hat, and inhaler all optional - only shoes are essential)

We went for a quick blast up and down on the bikes to make sure they were working OK. Mine was fine, but Mrs had sheared her rear gear cable somehow. A nice mechanic in the expo fixed it for €10, good as new. 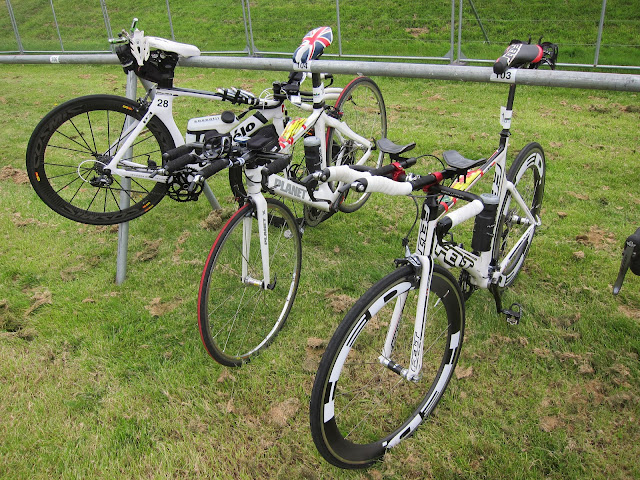 Our bikes, racked and ready to go (Ultimate Athlete Bethan Fowler's bike in the background)

All done, and it was back to Sea Breeze Lodge for a relaxing afternoon of doing very little, and updating my blog (there you go, we've caught up with real-time now!).

Swim: Put some effort in for once. I want to be out in under 35 minutes (tall order for first sea swim). Kick hard in last 100-150m, looks like it might be quite a trek up to T1 and jelly-legs would be annoying! Visualise transition.

T1: Fast, efficient, no faffing. No decisions to be made about what to wear or take, so no reason to slow down. Don't forget to put my bars in my back pocket. Not wearing a secondary bike top this time.

Bike: PACE YOURSELF! Start slower than I would normally want to and make sure HR is under control. Build after first 5-10 minutes up to around 130-135 BPM. See if I can hold it around there for the duration. Fuelling as has worked perfectly before - gel at +15, half a bar at +45, and gel/bar alternating every half hour from there. I'm carrying 2x 750ml drink so with a time of around 3 hours and 500ml/hour I should have no need to stop for anything. Take care flying through the aid stations, other people will be stopping! Don't forget to take feet out of shoes ahead of bike dismount!

T2: This should be very fast - nothing to do but put running shoes on. Take hat if it's strong sun (unlikely), change socks if it was raining on the bike (unlikely). Let's see how far up the ranking I can get for transition.

If I manage the bike well, and the first 10-15km of the run, I should be able to put in an effort to be proud of.

Let's see what happens tomorrow!
Posted by Norm at 16:54