My wetsuit is very old, about 8 years now. Technology has come on a long way in that time, and wetsuit design, construction, and materials are no exception. For long swims it rubs, moves around, and generally becomes uncomfortable. Not what you want in an Ironman swim.

I've been very impressed with the reports on the latest Blue Seventy Helix wetsuit, so when the Legends Of Triathlon podcast auctioned one off as part of their sponsorship from Blue Seventy, I gave it serious consideration.

The ebay auction was for 10 days, and was due to expire while I was on a business trip to the US. In fact, it expired while I was sat in a presentation. Thankfully there were 208 other people sat in the session too, so I could keep a half-eye on my iPad and see what was going on with the auction.

I set a mental upper limit, and with a few seconds left made (yeah I'm one of those people, sorry about that) I made my bid, and... I won! The good thing about last minute bidding is the instant gratification. 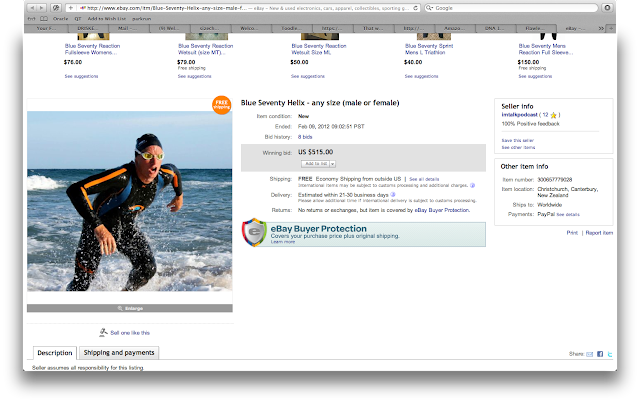 I won! In dollars!

It could have been worse, it could have expired at 9.30am the next day when I'd have been on stage presenting - much harder to furtively check ones iPad from there...

So, the big unknown, is I kind of assumed it would be a 2012 version, seeing as that's what everyone has been excited about lately. However, checking just now I learn that it's not out until February (though it is February now) and you can't buy it yet.

(Actually I've just realised the one in the picture is a 2010 version so I reckon that answers that question...)
Posted by Norm at 18:41