Race day! Woohoo! Up at 4:30am! Less woohoo, but got to be done... Race day mornings are a well oiled machine now. Up, eat, pack car, and off to Hampton Pool. I love these bank holiday Monday races. Now all we need a few more bank holiday Mondays through the year... 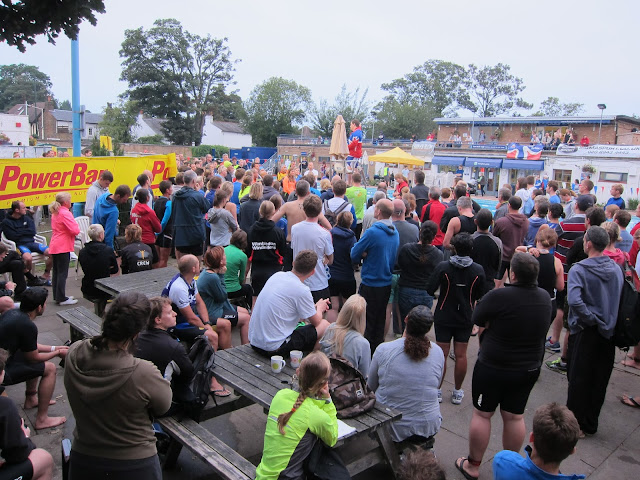 Decided to incorporate a good warmup this morning - some plyometric stretches, a few bodyweight squats and lunges, and then I ran down to the first corner on the bike course and back. Nice and sweaty, well warmed up, and after a race briefing at 6:30 we're off! Well, almost, there were 225 people to be off in front of me at 15 second intervals, but they soon were on their way and it was my turn. 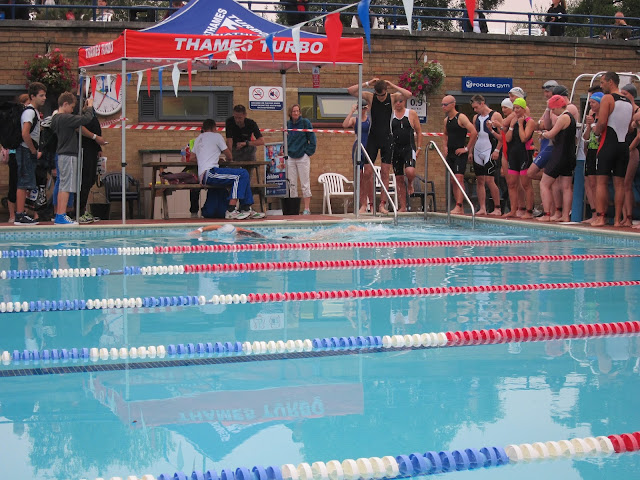 A few minutes past 6:30am and the very first swimmer is off

My swim plan was simple – it’s only 426 metres so push hard all the way through. In the first length and a half I’d caught the person in front of me (1.5 lengths swimming, 0.5 lengths trying not to swim over the lady I caught up). The swim marshalling was good and observant, so she was tapped on the head to wait at the end and let me past (as if my constant patting of her feet wasn’t signal enough!). I turned and pushed off hard, then turning for length 4 I caught the next person – same deal. In fact, I caught the next person in front on every pair of lengths – this broke my rhythm, slowed me down, and made the turns take longer. My swim time could have been quite a bit quicker – maybe as much as 15 to 20 seconds over all.

Time for a confession: This “catching people in the swim” problem is the downside of trying to be clever about where you’re positioned in the waves. When you sign up you provide estimates for your 400m swim time and overall race completion time. By having a good swim time estimate, but a slow overall race time estimate, you can get in the first or second wave. I have been under-reporting my race time deliberately to achieve just this result (sorry).

This means I’m surrounded by cyclists who aren’t as fast as me (plenty of people to chase) and because it’s still very early the traffic levels are low on the roads. However, those in the wave seem to be less good at estimating their swim time (it’s hard to do it unless you smash out 400m and see how long it takes) – I know I’ve made a hash of it in previous race entries. If I told the truth about my estimated finish time then I’d be in wave 4 with the scary fast people (along with Mrs). That wave are much more aware of their swim capabilities – Mrs didn’t catch anyone, or get overtaken, and could therefore focus on getting a good swim in. I may need to bite the bullet in 2014 and play with the fast people – being overtaken on the bike and getting someone to harder to chase would be good for me too.

In any case, swim done – couldn’t push as hard as I wanted, but I certainly went harder than I recall going before – this gave me a good time of 07:48 a new PB, happy with that!

I’d decided to try some new things in T1 to speed up and cut down on the number of things I had to do. Shoes were attached to the bike so I don’t need to faff about putting them on and running to the mount line in shoes with cleats, and I’d put my sunglasses across my tri-bars so I didn’t have to put them on and faff about more as they instantly steam up. The routine was simply: run to bike, drop goggles, put race belt on with my number on it, put bike helmet on, grab bike, run out.  This gave me my fastest T1 ever of 53s. Happy with that too. A "Swim + T1" PB of 40s. 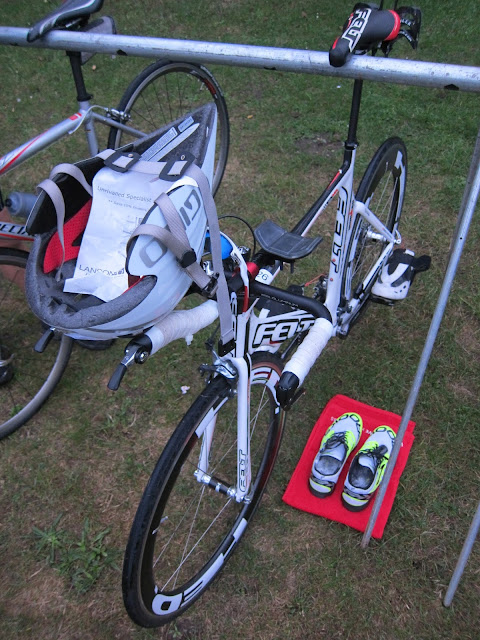 Out on the bike, feet slipped into my shoes perfectly (definitely faster, will use the same technique in Zell am See next weekend), got some momentum up, sunglasses on, and settled in for the short ride. I started reeling in the slower riders in front of me, taking a half dozen by the first turn-around. Thinking after the event, being around slower riders is not helpful. There’s nothing driving you on, no one to race, and no one to overtake you – you get a false sense of your own performance. Next year I’ll bite the bullet and start in wave 4, a little humility will do me good.

One set of traffic lights got me but I had good notice so freewheeled up waiting for them to change. A rubbish truck turned into the road in front of me later on and broke my rhythm – I overtook it after 10 seconds or so (felt like a lot longer). I pushed, keeping cadence high, changing up when I could and back down when needed. It was feeling good. No slowing for the speed-bumps, just keep pushing.  One final bit of fun at the end, sprinting to just beat someone to the timing line – maybe a sign I could have been going harder all the time? In any case, came out with a 35:52 which is just 44s off my PB. I’m more than happy with that as I’m certainly far less trained than last year – so with a good winter of base training to come there’s certainly scope for some big bike PB action next year.

I used 06:01 of the 7 minute non-compete zone trundling back up to T2, ran through T2 as fast as I could, including going the wrong way to Run Exit – never done that before! Proof if it were needed that some good transition visualization is important when you rack up in the morning – even if it’s the 10th time you’ve done the race. No room for complacency. T2 was over in 52s, another PB.

I knew the run would be the tricky bit – my swimming is feeling good right now, and I can usually pull out a good bike regardless, but you can’t fake it on the run. I was using my lovely Brooks T7racers from last year and they felt weightless. My cadence got up quickly to 5km turnover of around 92 strides per minute (measured from a sensor on one foot, so a stride is effectively two steps). I kept a good constant pace but was troubled by labored breathing. I was wheezing a fair amount and not running with an inhaler meant there was nothing I could do but push on through. It’s uncomfortable but not debilitating though certainly impacts performance. I was happy with my overall run time of 25:09, which gives a "T2 + Run" time of 26:02, a fair bit slower than my course PB "T2 + Run" time of 23:42 but still the fastest 5km I’ve run since returning to running.

Great stats showing me making places on transitions and bike, and losing them all on the run :)

So, a good day. I recovered quickly, no aches or pains apart from a slight Achilles tenderness from not being used to running in the low-drop trainers.

Mrs smashed her previous PB and absolutely monstered the bike – check her report. 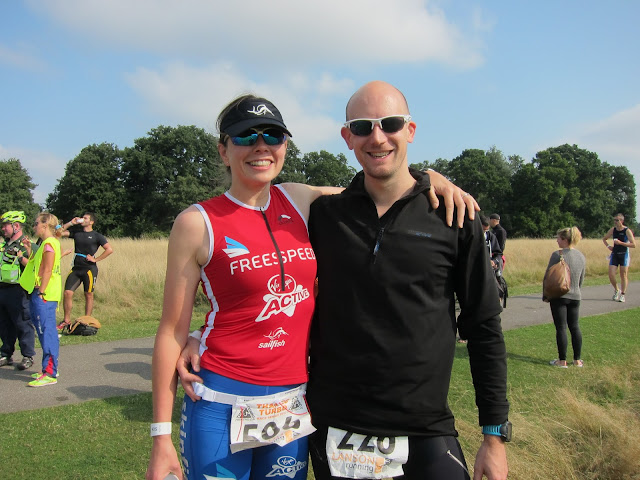 A calm week ahead now as I try to go into Ironman70.3 Zell am See-Kaprun fresh next Sunday!

P.S. I’m writing this on the plane on the way to Austria now and can confirm it was a calm-ish week, though it may have featured a bit more wine and Peanut M&Ms than is ideal – what is it about Peanut M&Ms? Way too addictive…
Posted by Norm at 21:03